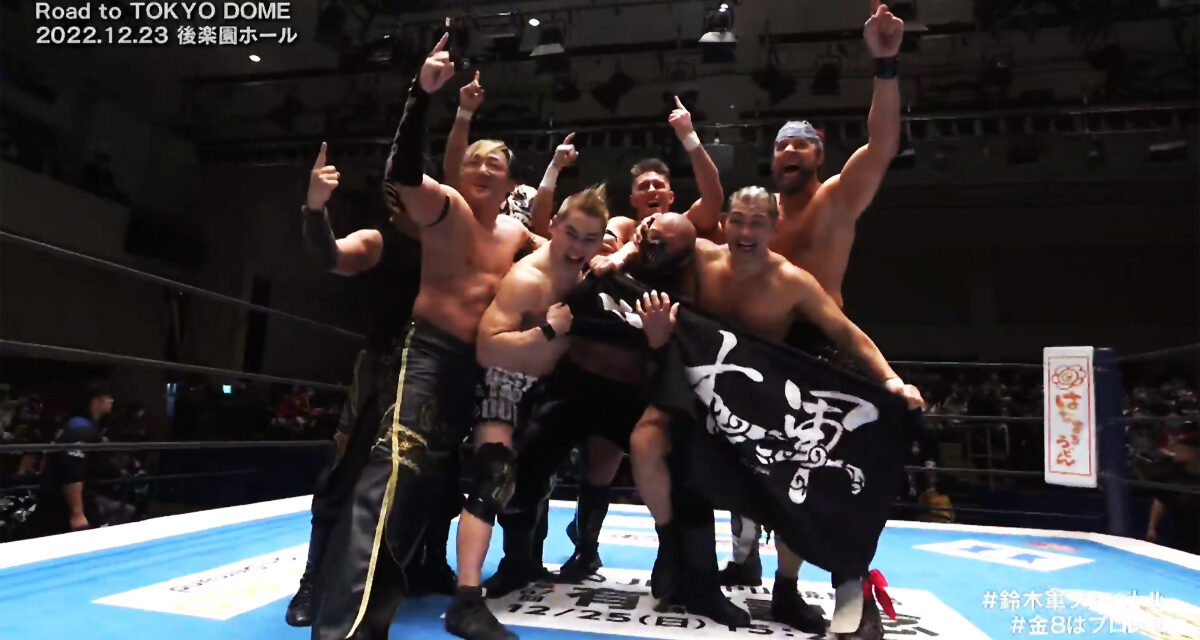 Like yesterday’s Road to Tokyo Dome show, NJPW’s go-home event today did next to nothing to advance any of the angles or the matches for Wrestle Kingdom on January 4th and January 21st.

The main event was Suzuki-gun’s farewell to NJPW. Leader Minoru Suzuki revealed recently that the faction would be disbanding at the end of 2022. The faction divided itself in two for what appears to be their final match. It was TAKA Michinoku, El Desperado, Lance Archer and Minoru Suzuki vs DOUKI, Yoshinobu Kanemaru, Taichi and Zack Sabre Jr.

You have to wonder though why this match was held on this card instead of Wrestle Kingdom where it could have had more of an impact and generated more interest? I don’t get it.

When the introductions were done the Korakuen Hall crowd gave a faction as a whole a round of applause. Taichi and Suzuki began the match trading chops in the middle of the ring for almost a minute and a half. The two then started trading forearms smashes and kicks. Tag partners Kanemaru and El Desperado then took centerstage countering each other’s moves until Kanemaru took Desperado down with a headlock.

Taka and Douki faced off with Douki getting the best of the veteran. Sabre Jr. didn’t back down from Lance Archer. Archer absorbed all of Sabre’s forearms and took him down.

The match ended with Taichi retrieving Takashi Iizuka’s Iron Claw from a bag in his corner. Red Shoes tried to stop Taichi from using it. Suzuki dared Taichi to hit him and he did. Sabre Jr. then pinned Suzuki with his Zach Driver.

“Thank you, Suzuki!” cried Zack as he pinned him. 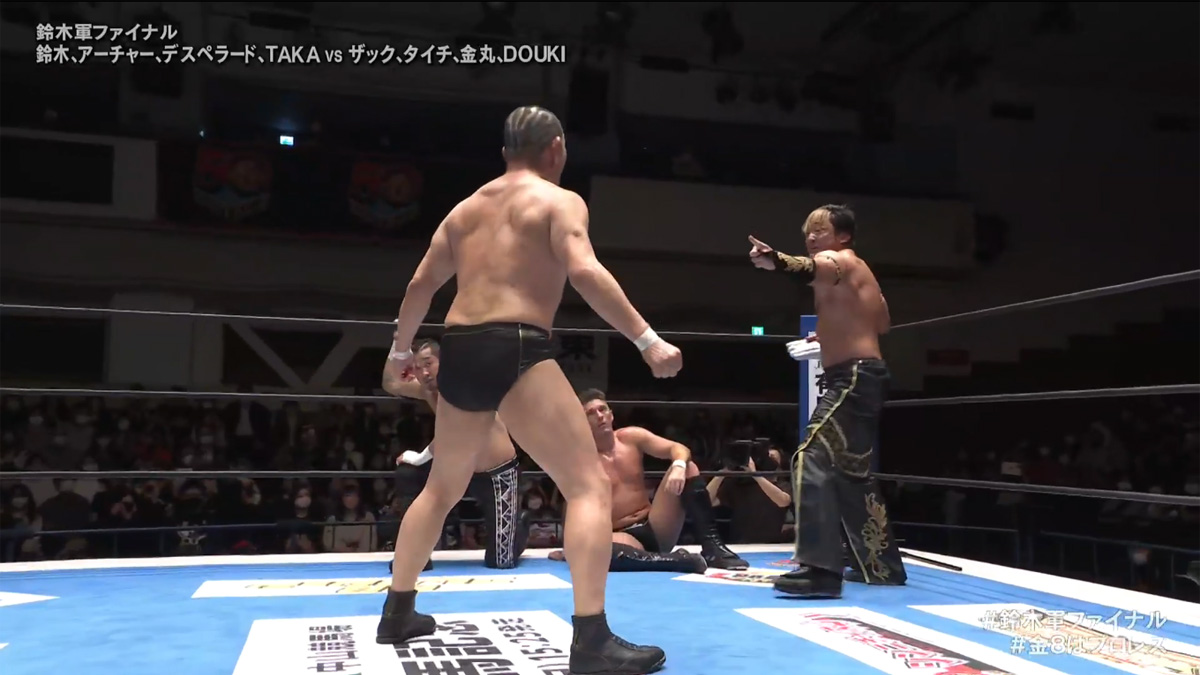 Suzuki asks to be hit with the Iron Claw. Courtesy: NJPW.

The entire faction then knelt over their fallen leader. 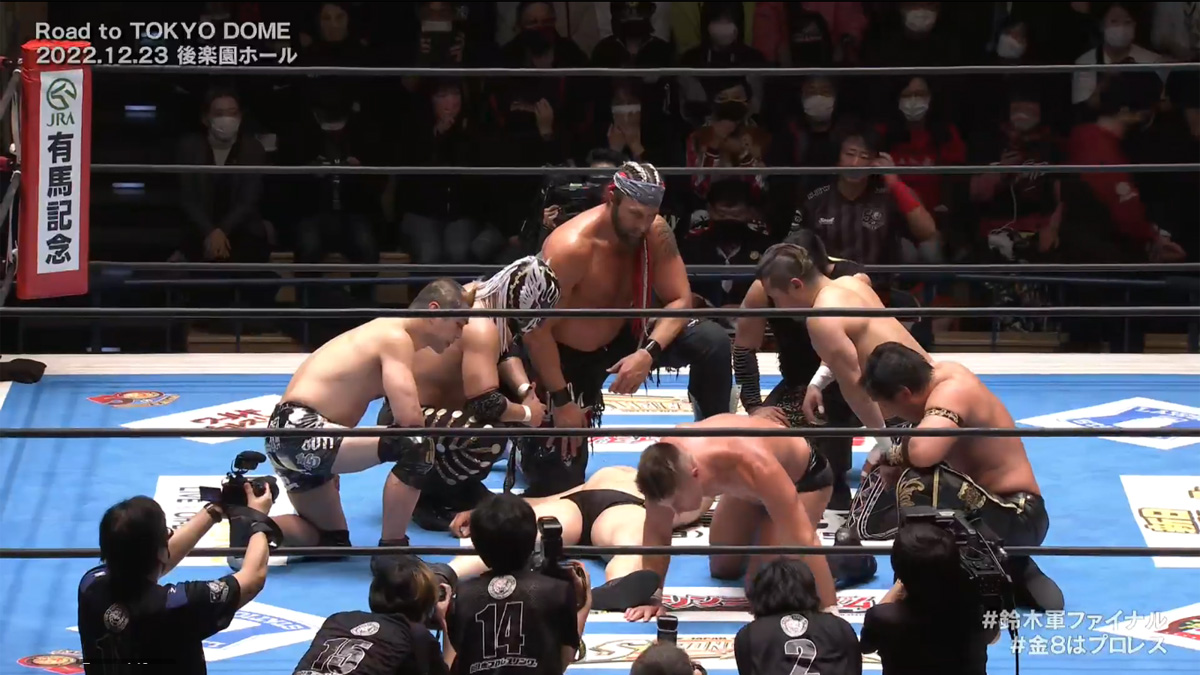 Taichi knelt down and hugged Suzuki. Everyone then helped Suzuki to his feet.

The faction then passed around the microphone for some final thoughts.

Douki said he had grow a lot since being in Suzuki-gun.

El Desperado said he arrived back in Japan not knowing what to do but Suzuki-gun gave him a home and he is thankful for that.

“Suzuki San. Twenty two years in professional wrestling. Over half of my career has been in Suzuki-gun. Eleven years. It has been an honour for me to wrestle in Japan but it has been a bigger honour to share the ring with you my brother forever!” said Archer to Suzuki.

Sabre Jr. said that when Suzuki-gun came to Pro-Wrestling Noah he thought to himself they were “super troublesome”. Sabre said the best choice he ever made was to join NJPW and Suzuki-gun.

An emotional Taichi was next. Taichi said Suzuki-gun wasn’t comparable to any other faction. He said he wouldn’t never have made it to where he has in his career were it not for Suzuki-gun and Suzuki.

Takashi Iizuka, chain and all, came out to join the celebration. The faction took photos and then Iizuka stole back his Iron Claw. Suzuki took a Suzuki-gun banner and folded it up in the middle of the ring.

The only other noteworthy happening besides Suzuki-gun’s farewell was that after the Master Wato, Yoh and Kazuchika Okada vs Gedo, Taiji Ishimori and El Phantasmo match, Francesco Akira attacked Yoh from behind with a German suplex and a Fireball. Kazuchika Okada came back to the ring to drive Akira away. Akira kindly told Okada, Yoh and anyone who would listen to do something to themselves that is physically impossible…in Italian. 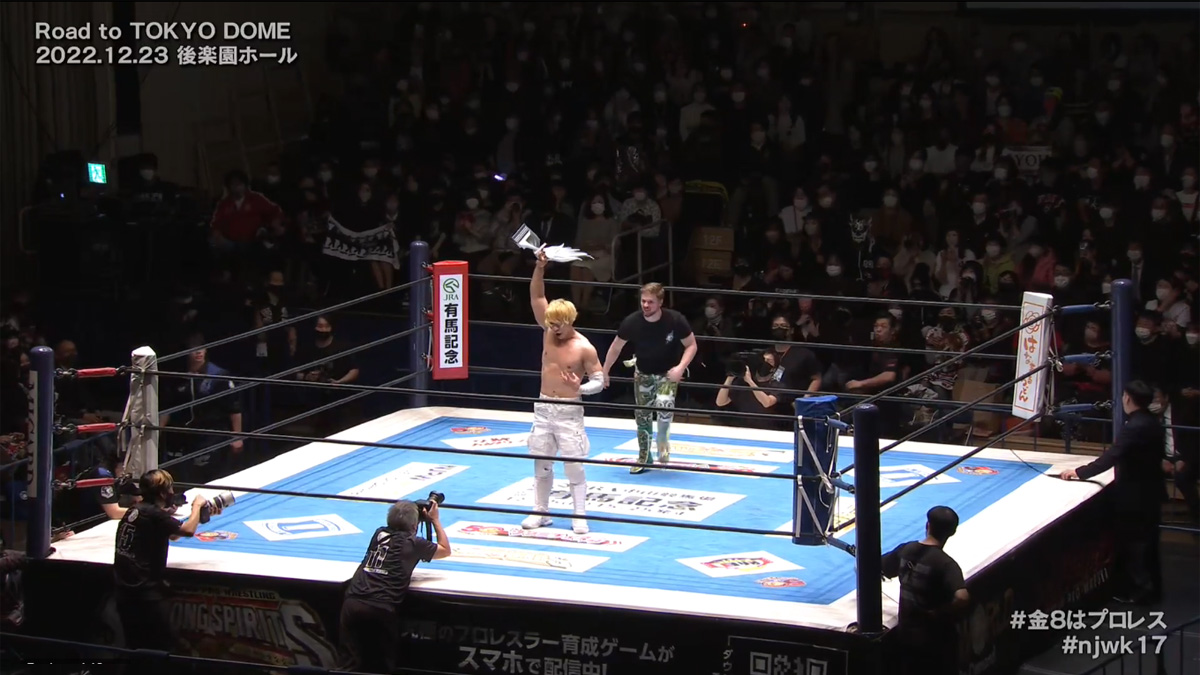 Shingo pins Togo with a Pumping Bomber and a sliding clothesline.

Hashi and Goto put Tenzan away with Shoto.

Naito pins Taguchi with a Destino.