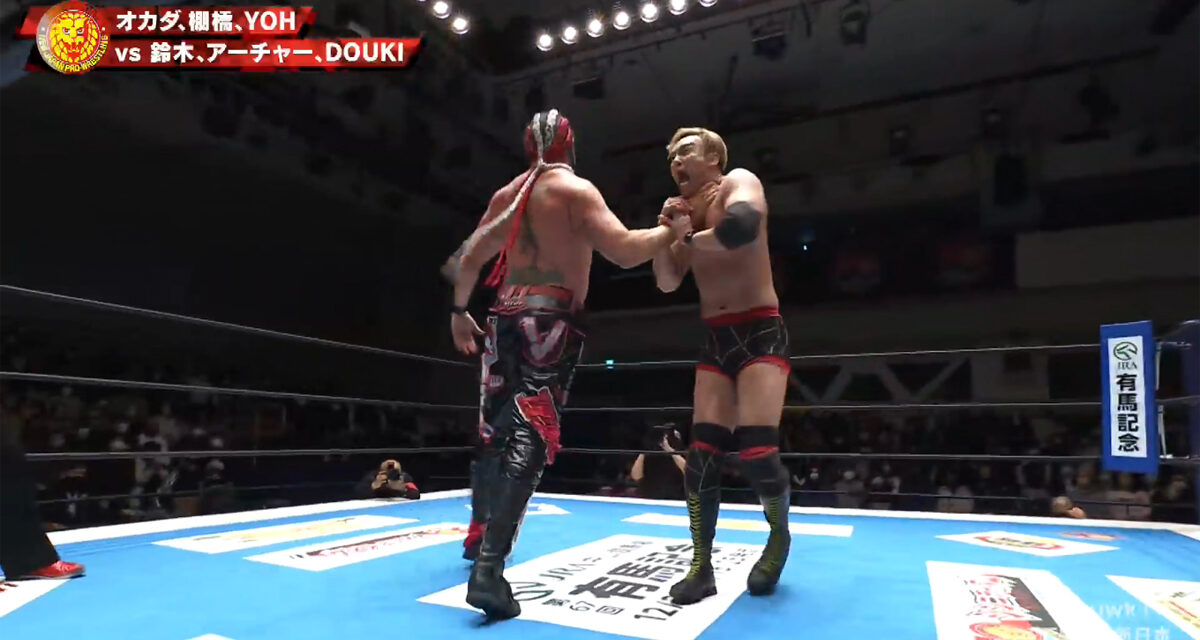 The first Road to Tokyo Dome show was an odd bit of booking. You would think that the second-last event hyping NJPW’s Wrestle Kingdom would feature more lead-ups, more spotlight matches instead of a bunch of unimportant and predictable Young Lion matches but…here we are.

Simply put, it was lackluster event but perhaps NJPW is concerned about injuries before Wrestle Kingdom? One surely hopes so.

In the main event, YOH, Hiroshi Tanahashi and Kazuchika Okada teamed up to take on the Suzuki-gun team of DOUKI, Lance Archer and Minoru Suzuki.

Lance Archer took to the microphone to wish everyone a happy and merry Christmas as he made his entrance. Despite stepping out of character it is great to see a promotion using Archer to his fullest. He really needs to leave AEW when his contract comes up.

Archer scares the faces by feigning a charge at them before the bell even rings. In a sign of respect Suzuki and Okada trade clean breaks in the ropes. Okada is tentative to lock-up with Suzuki but who wouldn’t be?

Archer and The Ace did pretty much the same thing trading rope breaks. Tanahashi signaled to Archer that he would like to do a Test of Strength. Archer was confused yet delighted? Archer raises his hands high into the air. Naturally, The Ace cannot reach up high enough. 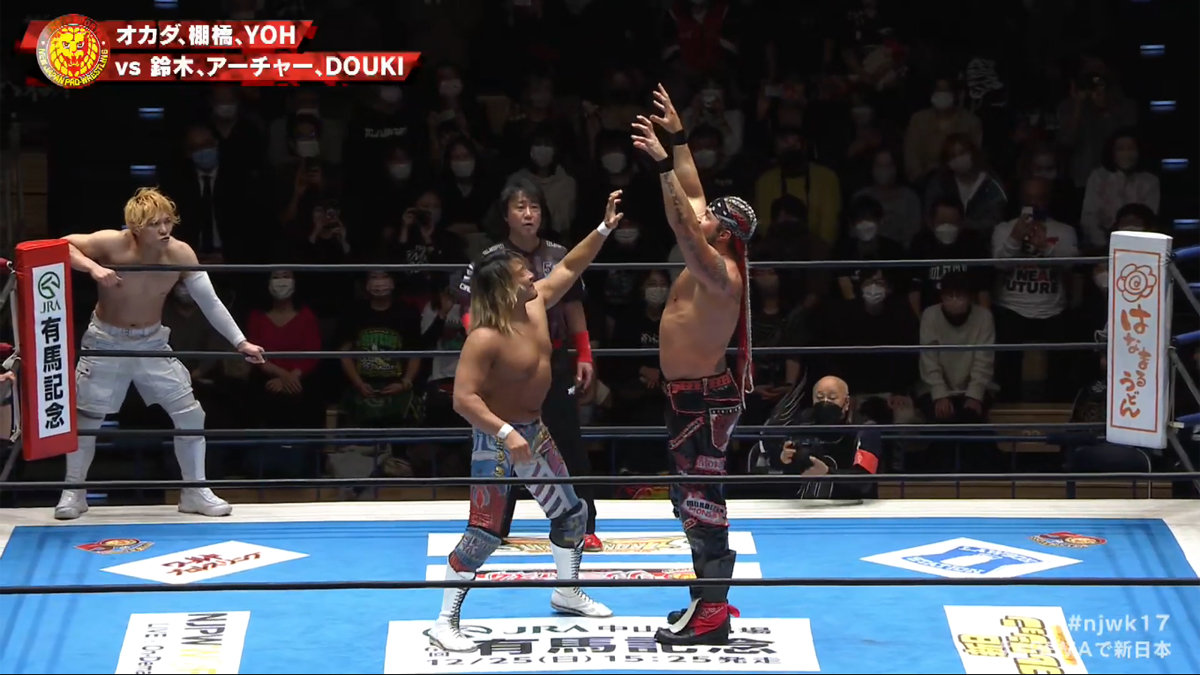 Anyone have a step ladder? Courtesy: NJPW.

Archer agrees to go down to The Ace’s level. Immediately, Tanahashi is driven down to the mat.

“You f—-d up now!” bellows Archer as he cranks down harder and harder.

Tanahashi escapes by stomping on Archer’s foot. The Ace is driven down to the mat by Archer’s shoulder tackle. The Ace rolls out of the ring. When he returns to the ring Tanahashi reaches back tagging in a surprised Yoh.

Yoh uses his speed to dodge Archer. He slaps his butt at him enraging the Murderhawk Monster. Douki calms an angry Archer down and tags in.

The pace quickens with Yoh tripping up Douki and drop kicking him in the face. Douki guillotines Yoh on the top rope. He and Archer double team Yoh as the match spills out onto the floor with everyone brawling.

Douki chokes out Yoh with his steel pipe as Lance Archer frightens a small child at ringside. Yoh slugs Suzuki. Archer taps him on the shoulder and punches him square in the jaw. Yoh is out. 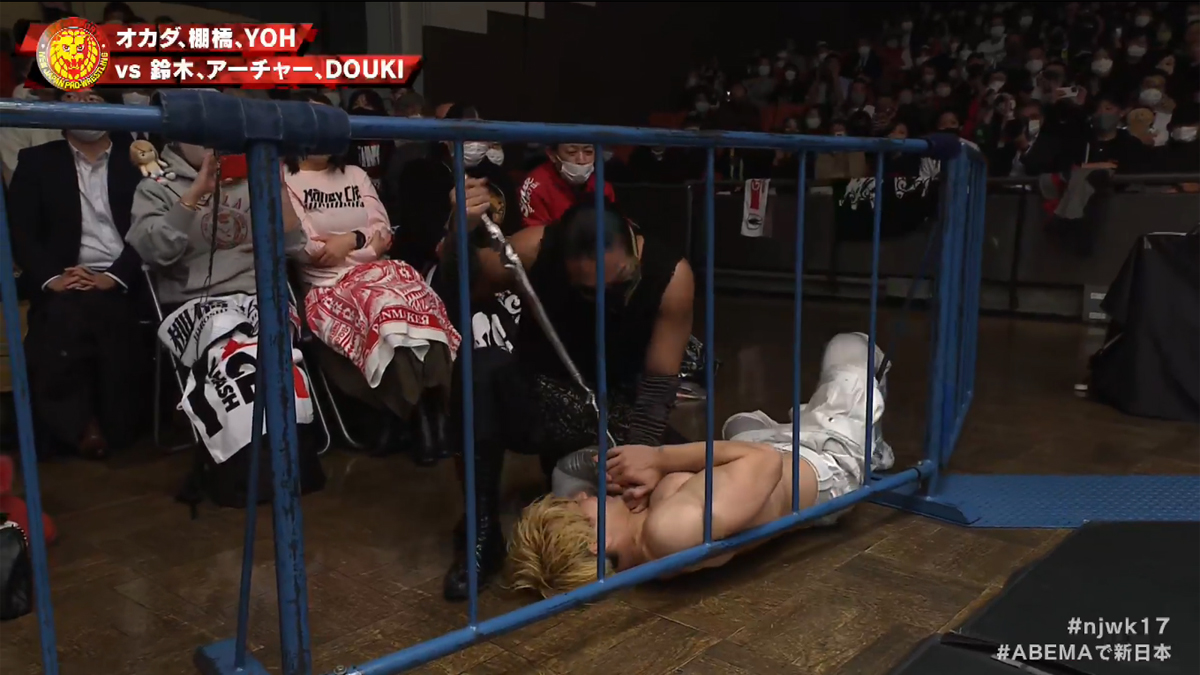 Suzuki-gun cuts Yoh off from his partners until Yoh is finally able to tag in Okada who battles through both Douki and Archer. Yoh ends up pinning Douki with a Direct Drive.

Henare puts Nakashima away with his Ultima (swinging full nelson).

Cobb pins Honma with a Tour of the Islands.

There is a segment highlighting the King of Pro-Wrestling Championship. NJPW is doing away with the trophy and creating an actual belt for it.

Takagi pins Makabe with Made In Japan. After the match Umino stares down Naito.

Taichi pins Jado with his Yokozuna Elbow. Narita and Sabre Jr. share some unpleasantries after the match. Sabre Jr. and Narita will face off for the Tournament final for the inaugural NJPW World Television Championship at Wrestle Kingdom.

As everyone else brawls on the floor El Desperado pins Gedo with Pinche Loco.