Rampage: Guevara takes a bite out of Moxley 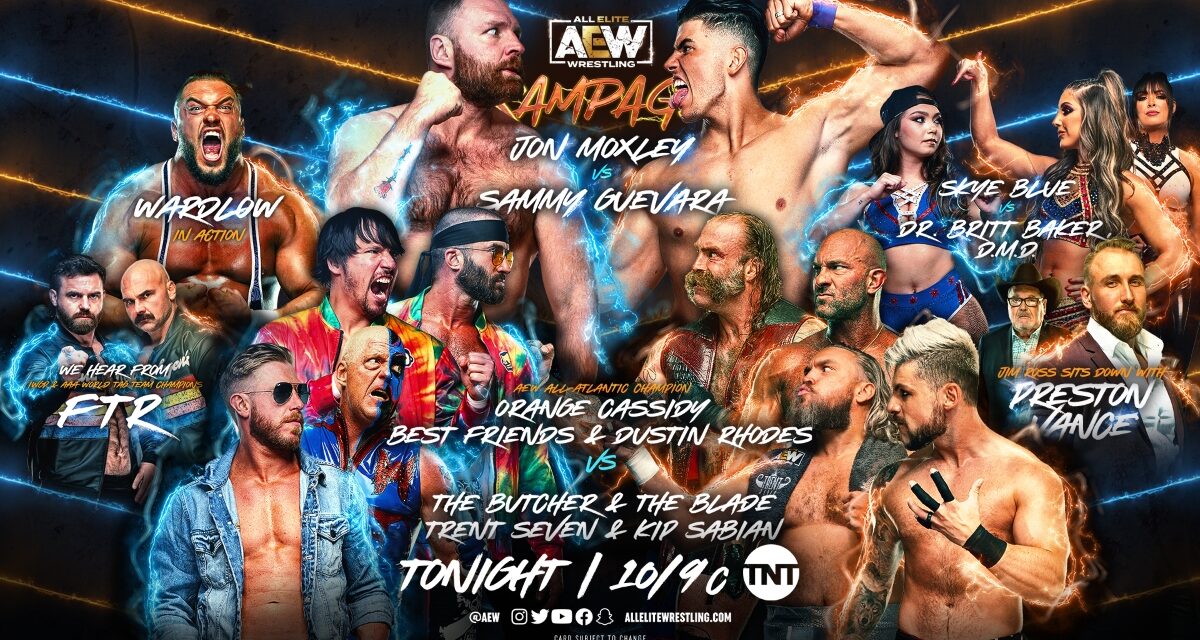 Greetings and Salutations! It’s Friday and you know what that means! It’s time for another Rampage. We will see Moxley again on the show as AEW tries to add eyes to the show. Without further ado, let’s get to it.

The show, in usual Rampage fashion kicks right off with Jim Ross welcoming us. The commentators for the show were Jim Ross, Excalibur, and Tony Schiavone.

Guevara attacked Moxley right away to start the match. Guevara with the upper hand until Moxley turned things around with a bunch of chops. Daniel Garcia was watching his mentor Sammy Guevara from the back on a monitor.

Both men ended up outside and Guevara was able to get the advantage as he sat Moxley on a chair only to chop the living heck out of him. Moxley once again fought his way back as he clotheslined Guevara over a guardrail. Guevara staggered back to the ring and once they were back in, Moxley hit a massive cutter on Guevara. Guevara slowly made his way back into the match and go Moxley down for a bit. Guevara climbed to the top rope but Moxley quickly got up and delivered a Superplex from the second rope. Moxley now just goes back to chopping the heck out of Guevara.

Guevara shows brief signs of life as he starts chopping the heck out of Moxley again. The two then traded forearms and this back and forth ended as Guevara hit a corkscrew dropkick and posed in mini triumph as Moxley rolled outside. Guevara went to the top rope but Moxley cut him off and did a back-rake. Guevara did a back-rake of his own but then Moxley bit Guevara but Guevara fought Moxley off the top, onto the apron where Guevara hit a double-stomp as we head to commercial.

.@JonMoxley takes advantage of the distracted lovers @TayMelo and @sammyguevara!

Moxley went for a German Suplex but Sammy landed on his feet and went to the top rope, where he landed a leaping cutter for a two-count. Guevara went for the GTH, but Moxley countered but it didn’t matter because Guevara countered out of that counter and dropped Moxley down to lock in the Walls Of Jericho. Moxley rolled out of it and kicked Sammy in the head. The two got to their feet and traded elbows. Moxley hit a curb stomp out of nowhere and got a very close pin attempt. Moxley is ready to turn this match up a notch and goes to the outside and sets up a table. Guevara cut him off though and kicked Moxley and put him on the table.

Guevara went to the top and hit a Swanton, breaking the table. Guevara rolled Moxley back into the ring and went to the top yet again and this time  hit a cross-body but Moxley rolled through and began to stomp on Guevara. Straight from the stomps Moxley hit a piledriver on Guevara for anther close pin attempt. Moxley now with a bulldog choke, but Guevara rolled out of it but Moxley hit a lariat right after but Sammy hit a Death Rider with his last grasp of energy.

.@sammyguevara risks it all to gain the advantage over Moxley!

A now beat up Guevara went to the top and hit a Senton for another close pin. Guevara continues his attack as he put Moxley on the top rope and went for a super-plex, but Moxley countered but Guevara came back with a Spanish Fly off the top but Moxley rolled through the Spanish Fly to make Sammy pass out via a bulldog choke for the win.

After the match, an incredibly bloody Moxley has the mic and calls out Hangman Adam Page. Moxley says that he isn’t hard to find on a Friday night. Page comes out pushing past Evil Uno and meets Moxley on the ramp and the two brawl. Security and suits come out to try to restore order.

An enraged #HangmanPage charges directly at @JonMoxley and takes out everyone in his path!

Saraya with a message to Jamie Hayter

A video package airs showing Saraya’s time in AEW. She then talks to the camera saying that she’s coming for her and the AEW Women’s Championship.

FTR’s incredible 2022 is the focus

Back from break, FTR were in the ring. Cash started out by saying last week sucked as they lost their ROH Championships. Cash said Dax broke his ass bone as Dax mooned the crowd. Cash said they feel like they let the fans down. Cash said that the fans have lifted them all year so losing last weekend makes them feel like they let the fans down. Cash went on to say it was one of the best years of his life and they owe the fans eternally for that. The crowd chanted “You deserve it.” Cash said it was a legacy year.

Cash said a couple of kids with daddy issues have their attention now and the Gunn brothers won’t kill their legacy. Dax spoke and talked about how after their match with the Briscoes, his daughter told him people like him. Dax said he couldn’t figure out why people like them. Dax said since he was eight years old, he just wanted to make people feel the passion he has for pro wrestling. Dax said on Wednesday, they’re going to do what Daddy Ass should have done a long time ago, which is kick their [The Gunn’s] ass.

"There's been a couple of kids with Daddy issues trying to get our attention, I promise you if anyone's gonna kill our legacy, it's sure as HELL not going to be a couple of dumbAss Boys" #FTR @DaxFTR @CashWheelerFTR have plans to take care of #TheGunns!

Jade Cargill is shown bickering with The Baddies. She finally talks into the camera and delivers a message to Bow Wow. She says the next time he gets in her business, he’ll be hearing from her lawyer Mark Sterling.

Britt gets the TV intro while already in the ring is her opponent, Skye Blue. The match starts and Baker gets off to an early advantage. Soon though we see Blue start to fight back  but we head to a mid-match commercial.

Dr. @realbrittbaker D.M.D, with #AEW Women's World Champion @jmehytr by her side, makes her way to the ring to face @SkyeByee!

Tune in to #AEWRampage on TNT right now! pic.twitter.com/oBcjXzK8En

Back from the break and see Rebel help Baker get her glove on for the Lock Jaw. Blue avoids it but ends up getting stomped with a curb stomp and Baker goes for the pin and scores the win!

Dr. @realbrittbaker cinches the victory with a vicious stomp to the back of @skyebyee's head!

Tune in to #AEWRampage on TNT right now! pic.twitter.com/lv2maI40rJ

After the match, Baker with the LockJaw on Skye Blue. She wasn’t letting go but then Hikaru Shida runs out from the back and chases off Baker, Rebel and Hayter.

Tune in to #AEWRampage on TNT right now! pic.twitter.com/MMKmdaU2zA

Vance said that the one thing he agrees about is that -1 shouldn’t of had to go through the death of his father, Brodie Lee. He says the same spark Brodie saw in him, La Faccion Ingobernable sees in him now. He says -1 has turned into a snot-nosed punk now and says he needs to grow up.

Will we get another Action Andretti this week? No. No we won’t. Prime tried to hit Wardlow a couple times but Wardlow sold nothing. Wardlow hit a clothesline and hit not one, not two, not three, but four power-bombs. Wardlow then pins him for the win.

The 4th Powerbomb equals victory for @RealWardlow and he wants a few words with the King of Television, @SamoaJoe!

Tune in to #AEWRampage on TNT right now! pic.twitter.com/rO0eS4LQIL

After the match, Wardlow grabbed the mic a calls out Samoa Joe. Wardlow demanded Joe come to the ring but Joe appeared on the screen instead. Joe said Wardlow can’t dictate anything to the King of Television. Joe said he hopes he never defends his titles in the God-awful state of Texas ever again. Joe said in Colorado Wardlow can have whatever he wants and the King has spoken, The match at New Years Bash is set up!

The KING has spoken!@RealWardlow and #ROH World TV & TNT Champion @SamoaJoe will come face to face once again at #AEWDynamite: #NewYearsSmash in Denver, CO! Tune in to #AEWRampage on TNT right now! pic.twitter.com/wzZvd6EvV1

Mark Henry started to talk and Dustin cut him off, but Trent said something odd  and that was that as Henry said it was time for the main event!

The Trens start the match as Seven chopped the other Baretta. The two exchanged elbows and Seven chopped the hell out of Baretta but Seven came right back and both guys went down before things went to chaos with everyone. After the dust settled Cassidy and Kip were left alone in the ring. They had a brief back and forth until Cassidy put his hands in his pockets. Butcher and Baretta were in the ring and then Butcher hit a back-body-drop and Blade kicked Baretta as we went to a PIP break.

Tune in to #AEWRampage on TNT right now! pic.twitter.com/stGY5WQpVI

Back from break, Trent Seven and Rhodes tagged in and Rhodes power-slammed everyone. Dustin punched Seven a lot before hitting an elbow to the head for a two-count. Cassidy was then in the ring with Butcher and The Blade. Baretta hit a double dropkick on Butcher and Blade and he followed that up, with Chuck Taylor, with a flip onto the opposing team on the outside. We got a few more splashes from both teams.

Tune in to #AEWRampage on TNT right now! pic.twitter.com/xbUqKAke0a

Bunny and Penelope came into the ring, but Cassidy and Danhausen pretended like the women attacked them and this got them ejected by the ref. Kip turned Danhausen around and punched him in the gonads. Sabian followed that up with a punch to Cassidy. The match was never normal but eventually Seven slammed Baretta from the top rope for a two-count. Dustin got a tag and hit a running Destroyer on Sabian. Dustin maintains his momentum and placed Kip in the corner for his signature kick. Cassidy softly kicked Sabian before Dustin went in for realsy’s. Dustin then with a bulldog on Seven for the win!

The show almost immediately ended after the match…..

We now have a streak of good Rampage shows. Yes, it’s only two but its better than the opposite. Having star power on the show, in this case, Moxley is only going to help the optics of Rampage. While the best match comes on first, I still think AEW should put a strong main event to keep people tuned in. Overall, a strong first match, okay middle segments, and a fun main event lead to a satisfactory show that left me sports entertained.