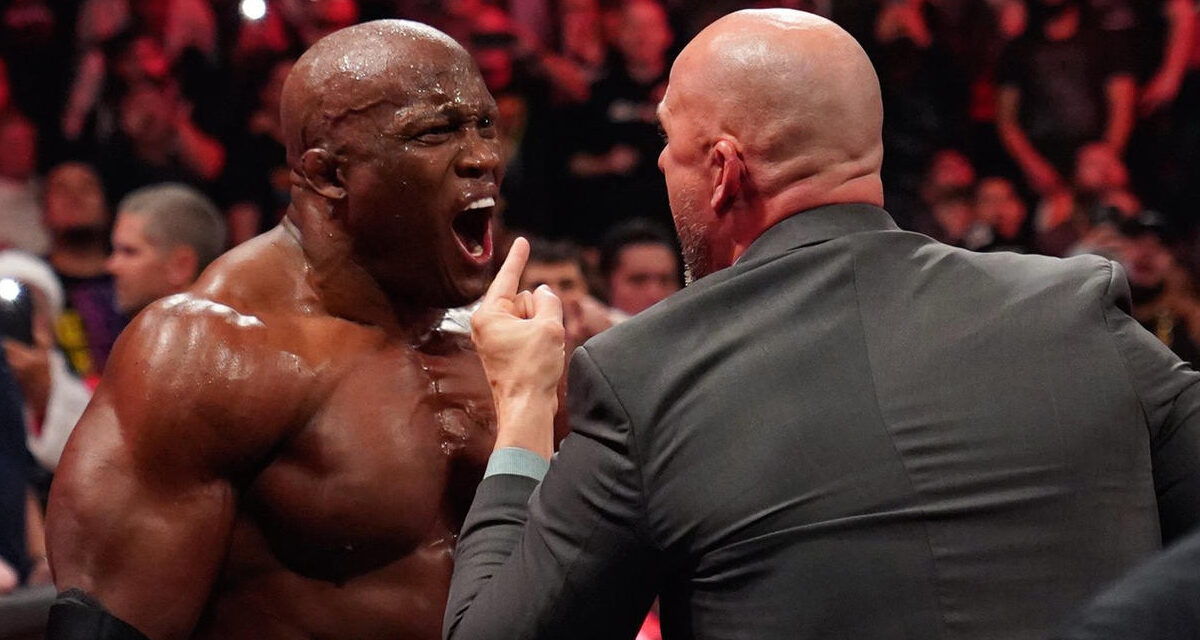 It’s another week of heading straight into action.

Before the match can get going, Becky Lynch assaults Kai-n-Sky and chases them off with a chair. Bliss doesn’t have Lilly with her, so it’s officially one on one.

Bianca Belair makes her way to ringside to watch the action. She seems to have new ink, for what it’s worth.

Bayley gets the early ADV until Bliss hits Cod Red for two. Bayley hangs Bliss on the second rope to take over. Doesn’t last long as Bliss transitions to Thesz Presses. Bliss stays on top briefly but we get back-and-forth action in short order.

Decent match being built here without going too high-risk.

Bayley gets a good close fall as the even-Stephanie action continues. Very not WWE style match here, which is a good change of pace.

Belair recovers a turnbuckle that Bayley removed and causes enough of a distraction… to do nothing effective.

A little bit later, Bliss hits Twisted Bliss for three. She had a minor slip on the ropes. Looks like her equilibrium is off, and ther’s something stuffed inside her ear.

It’s time to flip the title.

Gable is straight-up outworking AJ early on. Styles makes some good comeback action but the two are pretty much on their repertoires for much of the match.

Gable reverses a calf crusher attempt into the ankle lock. AJ reverses back, then Gable does as well.

More back and forth and a couple roll-up attempts until ultimately, Styles hits the Styles Clash for the duke. Still a very well protected finisher.

Backstage, The Way mini talk about how they’re starting to spend too much of Miz’s money and need to figure out how to make more cash.

Before we get the match, Cathy Kelley talks with the faces backstage.

Dawkins keeps getting hyped up by the announcers for his physical conditioning. Faces control with quick tags, and Tozawa uses the loudest yells since Iron Mike Sharpe retired.

Balor takes over on the face in peril. Nice running chop by Finn.

Judgement Day is starting to overstay their welcome with little in terms of character progression. Rhea continually on the outside doesn’t help, but the personalities overall aren’t jelling as much as they did at first.

Tez gets the hot tag and goes to town on Damian Priest. Little to no pinfall attempts keeps this match from getting very exciting.

Pounce sends Tez over the announce desk. We know he’s going to make it in though.

Dom Mysterio comes in and wastes no time with the Eddie moves to piss me off yet again. No. This isn’t heel heat. This is worse than X-Pac go-away heat. Graves goes into a soccer-one-name rant and my eyes may fall out from rolling so much.

Wonder what else is happening… hey looks like Kylie Rae was in a match on Main Event.

This match is bad. Just. Bad.

Sneaky Border Toss from Priest gives Dom the opportunity to get the pin.

On the concourse, The Way buys out a mech booth and plans to give away everything in sight. Too many fans are outside not watching what’s happening in the arena…

After the break, Gargano and Lumis toss stuff out to the crowd. Gargano then loads up a tee shirt cannon for more “fun” until Miz appears and steals back his money, at least he does until Adam Pearce stops the theft. Promo battle starts. Miz asks for a match against Lumis to earn his money back. Lumis agrees, and the match will be a Ladder Match. Miz has to put up money as well. The crowd chants “tiny balls” because apparently that’s still a thing. I won’t go into the rest of the exchange.

LeRae hits a decisively heel move going into the break with a Neckbreaker through the ropes. Hmm…

Back from the break, the action evens out. LeRae hits a big Tornado DDT for two.

Springboard Dropkick by SKY while LeRae is positioned on the top turnbuckle is something straight out of 2K. She then goes for a Tope Suicida Bomb, but LeRae holds on and we’re seeing why SKY can do. Poisonrana on the floor by LeRae leaders to another two count inside the ring. SKY looks like she was truly spiked and looks potentially injured. Shoryuken followed by a bridging German nearly gets the win for SKY.

The action is really hot but the crowd hasn’t been given reason to care about LeRae.

Kelley chats with Kevin Owens next. Elias interrupts, asking KO to be in his corner. Kevin recalls the whole Ezekiel shenanigans, along with being hit by a guitar. Owens then walks off. Memory isn’t usually a strongsuit in WWE so this was fun.

Elias holds a Matt Riddle Tribute Concert. Decent spot reminiscent of what made Elias a favorite way back when.

Sikoa dominates early, but as Elias starts to mount a comeback, Sikoa goes for a chair. Sammy (Uso) had to talk him down going into the break.

Back from the interruption, Sikoa is dominant with a Hip Attack. Goes for the Diving Headbutt but Elias rolls out. The crooner keeps up the action with various strikes, then a spinebuster. Rude Awakening gets two for Elias. Superkick and Spinning Uranage turn the tide and get the duke in a relatively short and honestly fairly forgettable match.

After the match, Sikoa continues to hammer Elias. Zayn picks Elias up so Sikoa can deliver the Samoan Spike. Sikoa then heads outside with more Pillmanizing in his mind until Owens comes out and delivers a quick Stunner. Sikoa and Zayn back away. KO hits Elias with a Stunner just for fun to end the segment.

For the first time in my memory, Asuka has no facepaint on for a match.

Very even match with Asuka’s strikes against Ripley’s raw strength. I’d sooner have seen this as a PLE match but this is very strong.

Asuka refuses to release an arm bar until Ripley forces the break. The two end up on the apron with the strikefest continuing. Codebreaker on the apron should in theory have done more damage to Asuka… just saying…

After yet another break, Ripley controls and slows down the pace. Series of reversals leads to a near roll-up win for Asuka. The crowd is all white noise hum despite how good this match is. Riplet begs for strikes, Asuka delivers.

Hip attack sends Ripley out and Dom getting involved and serving up the distraction. Riptide is reversed into the Asuka Lock, which Dom breaks up by dragging Rhea’s foot to the rope. He gets the… um… turquoise mist?… as a result, then Ripley hits the (not) Riptide from behind for the win.

Sloppy finish aside, this was a good match, much better than the fans gave it credit for. Lousy Milwaukee…

This feels like the end of a marathon. Not in a good way.

Early on, Lashley has the advantage but Rollins outsmarts him. Action goes from ring to outside to ring to outside. We keep getting looks at Austin Theory watching from backstage. Back and forth action continues as the fans show support for Rollins by singing his song.

Hurt Lock and Spear don’t get the win, and in the midst of all the battling, the ref takes a bump.

Stomp can’t beat the power of Lashley’s neck, apparently. Spear attempt is reversed into a Pedigree, and this one is mercifully over.

Post match, Lashley continues to show he hates authority. This results in Adam Pearce coming out and ultimately firing Lashley. Odd way to finish the show for sure. Intriguing, but odd.