World Tag League has its finalists 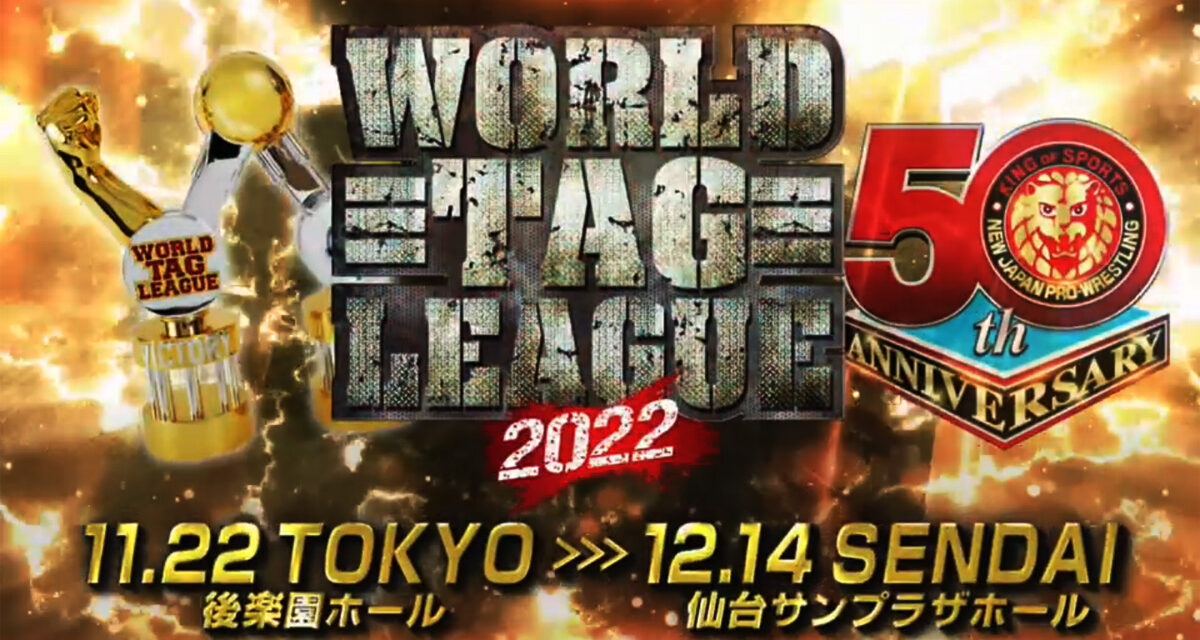 The winners of World Tag League this year will either be the Chaos team of YOSHI-HASHI and Hirooki Goto or The United Empire’s Aussie Open. The two teams finished at the top of the tournament with 14 points each. They will face off on at Wednesday’s big finale. During their previous meeting in the tournament Aussie Open defeated Hashi and Goto.

Also on Wednesday’s show, the Bullet Club team of Chris Bey and Ace Austin will face Lio Rush and YOH to determine the winner of Super Junior Tag League.

The winners of World Tag League will take on the IWGP Tag Team Champions at Wrestle Kingdom. Currently, that is FTR (Dax Harwood and Cash Wheeler) .

The winners of Super Jr. Tag League will face the IWGP Junior Heavyweight Tag Team Champions at Wrestle Kingdom. At present, United Empire (Francesco Akira and TJP) are the champs.

Fale once again wins with the Grenade.

Fletcher pins Leube with a piledriver.

Once again, Shingo pins Honma with a Pumping Bomber as he has the last few shows. 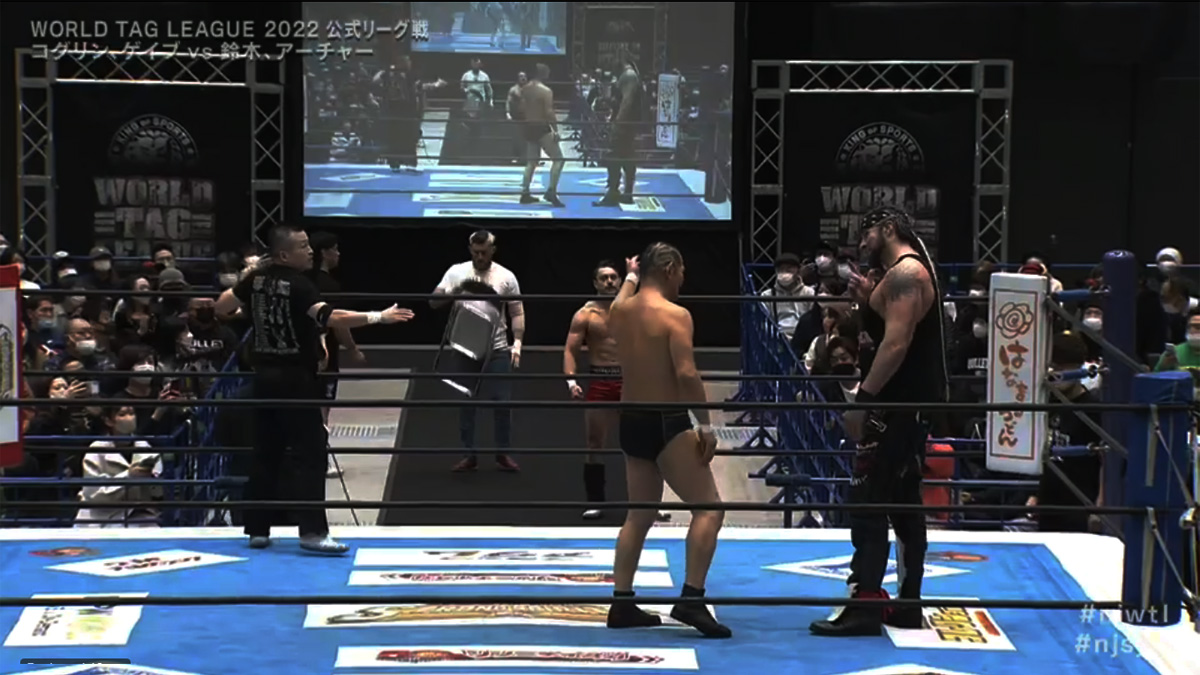 Suzuki and Archer are challenged to a street fight. Courtesy: NJPW.

When Kidd and Coughlin arrive in the ring Kidd is in his street clothes. Kidd says he is pissed off. One, he and his partner cannot win World Tag League and England is out of the World Cup. Kidd challenges Archer and Suzuki to a fight on the floor. The official waves things off but Archer and Suzuki hit the floor. Suzuki and Kidd swing chairs at each other. Kidd head butts Suzuki who just absorbs the damage. 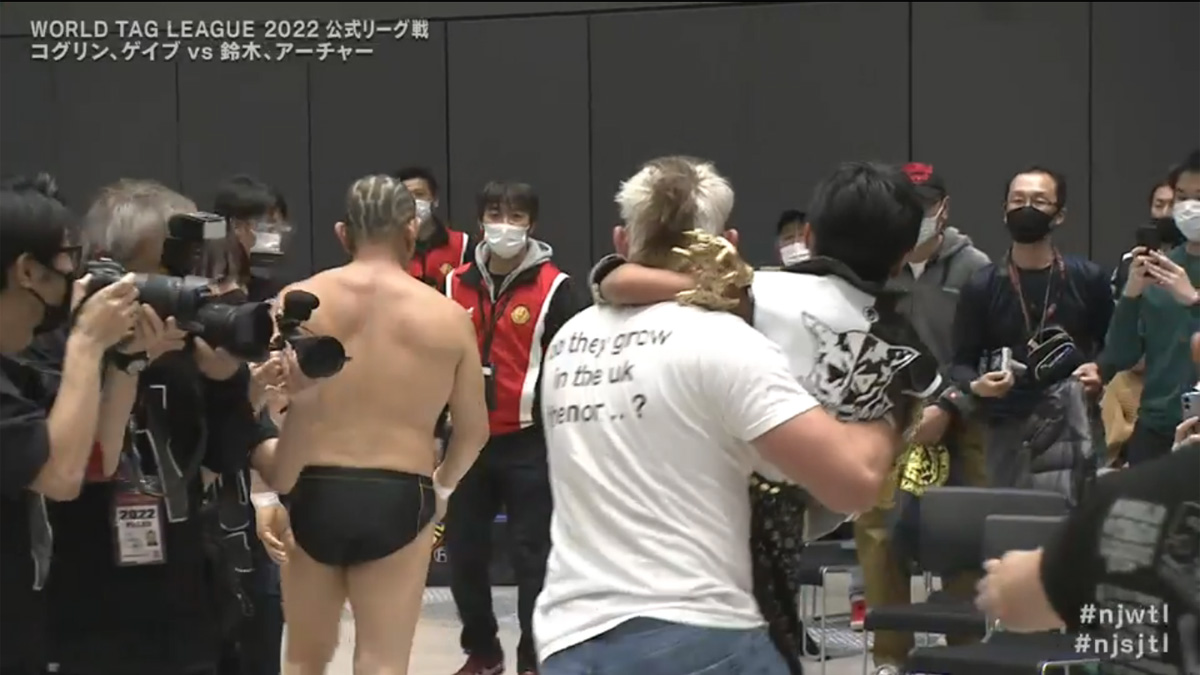 Kidd uses a kid as a weapon. Courtesy: NJPW.

Suzuki and Kidd brawl into the crowd as Archer chases off the commentary team. Kidd picks up a kid and runs him at Suzuki in a playful way. Kidd gently puts the kid down. Suzuki drops Kidd…not the kid…with one shot and drags him back to the ring. Suzuki batters Kidd with a steel chair. The match finally hits the actual ring. Archer hits his Blackout on Coughlin as Suzuki plants Kidd with a Gotch Piledriver.

Sanada has the match won. The lights go off in the arena. When they switch back on Evil is in the ring and Sanada is down. The crowd boos. Sho comes down to the ring and they all stomp on Sanada. Sanada and Naito battle back against the odds. Sanada has Yujiro submitting to Skull End but the official is distracted by Dick Togo. Yujiro brings his cane into the ring. Sanada takes it away. The official questions Sanada about the cane. Yujiro tries a low-blow from behind. Sanada blocks it. Yujiro pulls the official in close. Sho slips into the ring and low-blows Sanada. Yujiro pins Sanada.

Hashi and Goto win with Shoto.