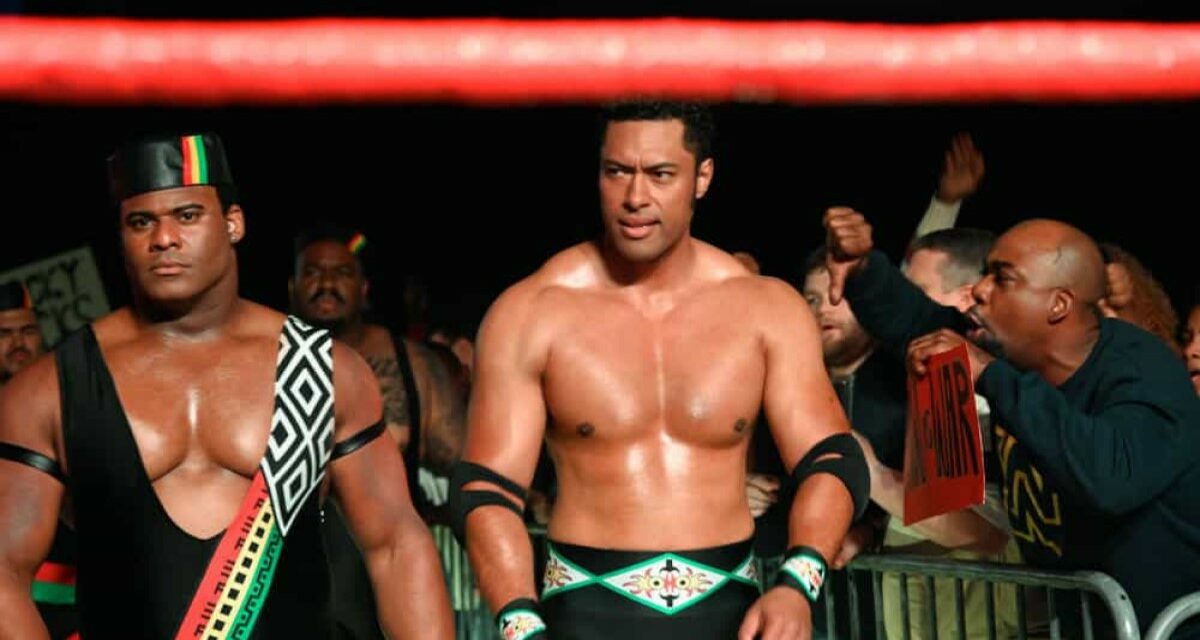 This week’s episode of Young Rock, titled “Five Days,” operates like a Greatest Hits review package of The Rock’s burgeoning career at the onset of the Attitude Era. Catchphrases. Elbow drops. A lasting name change. It’s all here as Dwayne, played by Uli Latukefu in this timeline, gets his hands on everything he’s dreamt of in the wrestling business — and finds out it comes with a few strings attached.

We begin, though, in 2032 (though surely it’s 2033 by now, and they just don’t bother listing the year anymore), as Dwayne and travelling companion Randall Park are still in the fictitious and coffee-blessed country of Gjelghiughm (it’s pronounced a bit like “Belgium”) to see Prime Minister Angela Honig, who is a big fan of The Rock, about brokering a deal to satisfy the coffee needs of America.

Johnson and Honig share thoughts on the sudden onrush of fame, which is the focus of tonight’s episode. Dwayne, naturally, has a story or two to tell her, so we return to 1997 to recap his promo chastising the fans for the “Rocky Sucks” chants that followed him around. While out for dinner with his wife Dany, Dwayne questions whether he did enough to get over as a heel, and there’s a bit with a waitress ignoring his request for a water refill. I was pretty sure that they were leading up to revealing that she was refusing to serve him because of his heel turn, but it turns out she’s just bad at her job. Still, there’s more to come with her later on.

Johnson has to wait for five days until he’s in front of a crowd again in Chicago to find out what the fans think of the new him, and the wait is driving him batty. Four days. All he can think about is that next show in Chicago. Three days. He invites his family over. Two. He cleans and cleans like he’s Rapunzel in Tangled. One. He visits his friend Downtown Bruno.

Finally … he makes it to Chicago and the fans hate him. Or at least love to hate him. He’s thrilled, and it kicks off a “Cities of America” montage with Johnson running his mouth: calling out jabronis and instructing them to know their roles and shut their mouths. He moves his way up in the card and is taking on Ken Shamrock (it’s time to give a nod to the nice touch of switching to a 4:3 aspect ratio for some of these old wrestling clips) and improvises a People’s Elbow. Both the crowd and Dwayne enjoy it, but Shamrock rightly calls it out for being ridiculous.

I mean, as a move it’s ludicrous but entertaining, which just might be the world of pro wrestling in a can.

We embark on a medley of People’s Elbow drops. See if you can guess or spot which ones from this list are used:

Dwayne fulfills a promise to his dad to help Rocky open up his new gym, and they’re welcomed by a huge crowd — mostly there for Dwayne. He then heads to a bar with Bruno and is interrupted by adoring fans, when really he just wants to watch the football game on TV. He’s still doing homework, though, as he pays attention to how Deion Sanders talks about himself in the third person. He’s out to dinner again with Dany (and that waitress from earlier is now falling over herself to serve him), and a couple of fans nervously ask for an autograph.

Dwayne sighs and reluctantly grants their wish, but Dany helps him to see how he brushed off their big moment with him. Dwayne learns a little more about life in the public eye, apologizes to the fans, delivers a promo for them, and picks up their tab to set the tone for what does seem to have been a lifetime of making much of his time available for fans.

The final piece of the evolution shown tonight has Dwayne giving up the name Rocky Maivia and introducing himself to the fans as The Rock. With the transformation complete, the rest of the season seems poised to detail the highest points in Johnson’s wrestling career before teeing up his departure for Hollywood — in this timeline, at least.

Next week, we should return to the youngest Rock, and we’ll have your review right here on SlamWrestling.net!