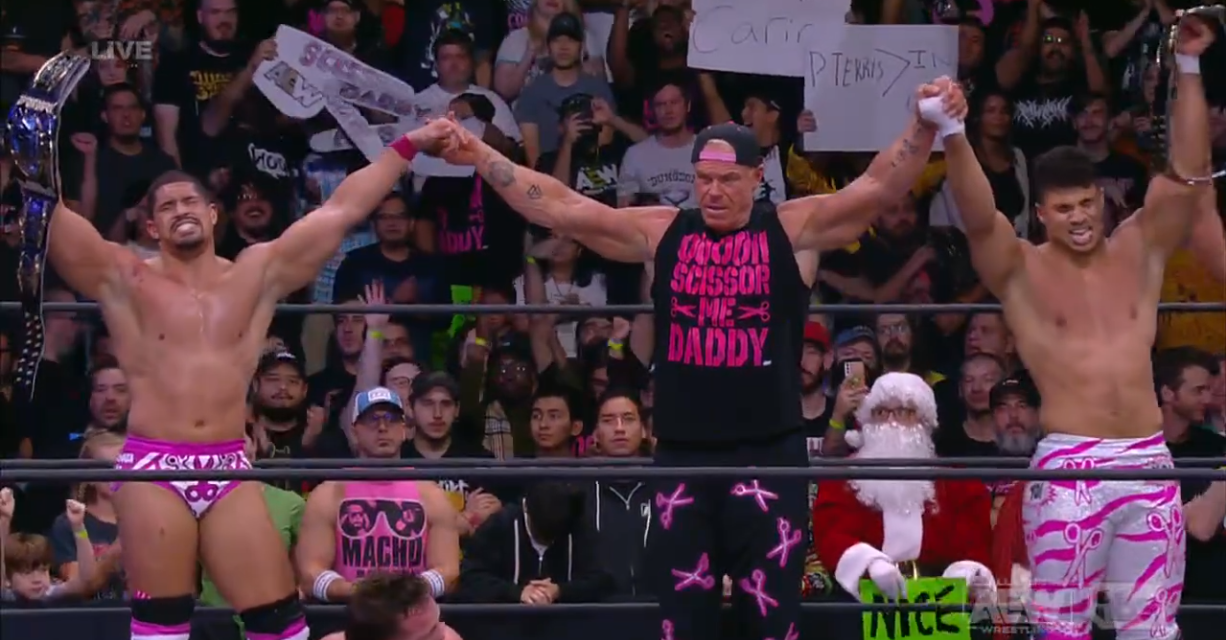 We all know that William Regal will be returning to WWE, but he is still a big part of the AEW World Heavyweight title story, seeing has MJF blasted him in the back of the head. Regal is still in the hospital, according to the commentary team. Speaking of MJF, the Dynamite Diamond Battle Royale is tonight, but since he is the champ, he isn’t involved in the match. Let’s get right to the action.

Some highlights from the battle royale; Dustin Rhodes hit Kip Sabien with a Destroyer and then taook him over the top rope. Brian Cage accidently eliminated himself trying to hit Jack Perry with a leg drop on the apron. Perry then took out Lee Moriarty with a hurricanrana only to get decked by W Morrisey. Perry hit the floor and was eliminated. Morrisey then choke slammed Perry into the apron. Ethan Page ordered Matt Hardy around the ring, making him help Page try to win. In a big surprise, Cpt. Shawn Dean made the final four.

The final four reaming are Shawn Dean, Matt Hardy, Ethan Page and Ricky Starks. Page chews out Hardy for not following orders. Page had to eliminate Dean on his own. Hardy looks for a Twist of Fate on Ricky Starks, but Starks counters, tossing Hardy over the top. Page dodges a spear in the corner and kicks Starks in the head. He picks up Ricky and runs to the ropes. Starks slides down his back and shoves him over the top rope to win.

MJF hits the ring before the bell has even finished ringing. MJF calls out Bryan Danielson for being terrified of him; which is why he isn’t here. MJF tells Starks that next week he will be four time Dynamite Diamond ring winner. He verbally abuses Starks, calling him a knock-off Rock. Starks hits back, calling him Maxi Pad and a fifth rate Roddy Piper. Ricky vows to not let the people down, unlike MJF. The champ answers with a shot below the belt. Starks recovers and takes out MJF with spear.

Jon Moxley is starting to like Hangman Adam Page, because last week he did his talking with is fists. This weekend Mox is bring back wrestling by taking out the Jericho Appreciation Society. He wants to put them in the rear view for good.

Darby knocks Joe out of the ring, but crashes and burns on the suicide dive. Joe slams Allin into the barricade and then into the ring apron. Joe rips up the floor mat and power slams Darby into the concrete.

After the commercial break, Allin is knocked off the ring post with force. Allin crashes to the floor and is checked on by AEW officials. Darby some how slides back into the ring to beat the ten count. Allin runs into a Manhattan drop and takes a senton, but still kicks out. Joe catches Allin on the floor, but he sends Joe knees first into the steps. Allin connects with the Coffin drop on the outside. In the ring, Darby hits the stunner but Joe kicks out of the Code Red. Joe with an STO out of the corner. Darby fights Joe off the top by biting him. He goes for the Coffin Drop, but Joe catches him. The champ locks in the Coquina Clutch and Allin taps.

After the bell, Allin gets in Joe face. The champ lays him out with a head butt. He hits Darby with a muscle buster onto his skateboard. Joe then locks in another choke. Wardlow hits the ring, chasing Joe off.

Orange Cassidy tells Kip Sabien if he wants a shot at the All Atlantic Championship he just needs to asks. Kip says he isn’t at 100%, so Orange tells him to find someone to face him though.

After a commercial break, Claudio and Jake trade blows. Castagnoli with the running uppercuts. He rocks Hagar in the corner with a right hand. He goes up top, dropping Hagar with an awkward hurricanrnana. Garcia breaks up the giant swing. Claudio slams Garcia to the mat and Yuta hits a splash. Claudio takes Hagar for a spin and follows with a lariat. Moxley takes out Sammy Guevara, who jumped onto the ring apron. Hagar with an ankle lock on Claudio and Garcia locks in the dragon tamer on Yuta. Castagnoli powers out, shoving Hagar into Garcia. Castagnoli drills Hagar with an uppercut and covers to get the pin.

After the match, Tony Schiavone interviews the winners and shows them an interview with William Regal after Full Gear. This interview was only meant to be seen if something bad happened. Regal gave MJF what he wanted, but now everyone will be going after him. He realized that the Blackpool Combat Club didn’t need him, but they would never let him go. He know Mox will understand. Regal did this to teach one final lesson. Always be prepared and have eyes in the back of your head.

Mox knows that the men in the ring right now live and breathe professional wrestling and at Final Battle the war with the JAS will end.

The House of Black is going to put down the corruption in AEW.

Jamie Hayter will give the winner of the Regina de Wave Championship a shot at the AEW Women’s championship.

Jade Cargill and the Baddies vs. Kiera Hogan, Skye Blue and Madison Rayne

Cargill has Red Velvet start the match. Jade hits Madison Rayne with Jaded in the middle of the ring to get the pin.

Winners via pinfall: Jade Cargill and the Baddies

Tony Schiavone tries to interview Saraya, but Britt Baker crashes it. She challenges Saraya to a tag team match, if she can find a partner.

Anthony Bowens has to escape out of the FTR corner as Jeff Jarrett and company watch in the back. Bowens and Cash Wheeler trade headlocks and take downs. They fight to a stalemate. Caster and Harwood tag in. Max with an arm drag. Things break down as all four men brawl in the middle of the ring. Cash is dumped hard out of the ring. Bowens goes up top and hits Scissor Me Timbers on Dax. Caster has to fight his way out of a sharpshooter and looks to lock in one of his own. Bowens cuts off Wheeler in the ring and locks in a Sharpshooter. Both members of FTR get to the ropes and go to the floor. Bowens is bounced off the post, while Caster is catapulted into the underside of the ring apron.

After a commercial break, Caster flattens Wheeler with a flying cross body. Harwood tags in with Bowens, who takes the fight to FTR. He batters Dax into the mat and hits Cash with a Famouser. A knee strike to the jaw of Dax nearly gets the pin. Harwood rips off German suplexes. Bowens hits neck breaker, but still can’t get the pin. Cash makes a blind tag and FTR hits the spike piledriver, but still can’t get the pin. Caster saves his partner from a double suplex. Caster picks up Dax, allowing Bowens to hit a cutter. Dax rolls through a double team attempt and Wheeler takes out Bowens. They set up Caster for the Bug Rig, but Max is able to fight his way free. Caster gets sent into the ring post and FTR hits the Big Rig. Bowens breaks up the pin at the last micro second. Wheeler knocks Bowens off the apron to the floor. Caster is set up top. Bowens shoves Dax the floor. Bowens hits Wheeler with the Arrival, but Caster cannot connect on the Mic Drop. Bowens drops on elbow on Harwood on the floor. Cash and Max trade blows. Wheeler hits a power bomb, but Caster rolls through the jackknife pin and is able pin Wheeler and get the three count.

The Acclaimed show respect to FTR in the middle of the ring and all five men scissor. We cut to the Gunns in the back. They got FTR a present. The Briscoes are challenging FTR to a double dog collar match at Final Battle. That’s the show; see you in seven!

Watch the AEW Tag Team Championship Match between the Acclaimed and FTR. That was a PPV quality bout given away on free TV. If you have time check out the tag match with Claudio Castagnoli and Wheeler Yuta teaming up. Seriously, the Acclaimed raised their game tonight versus FTR.