Raw: Titles on the line 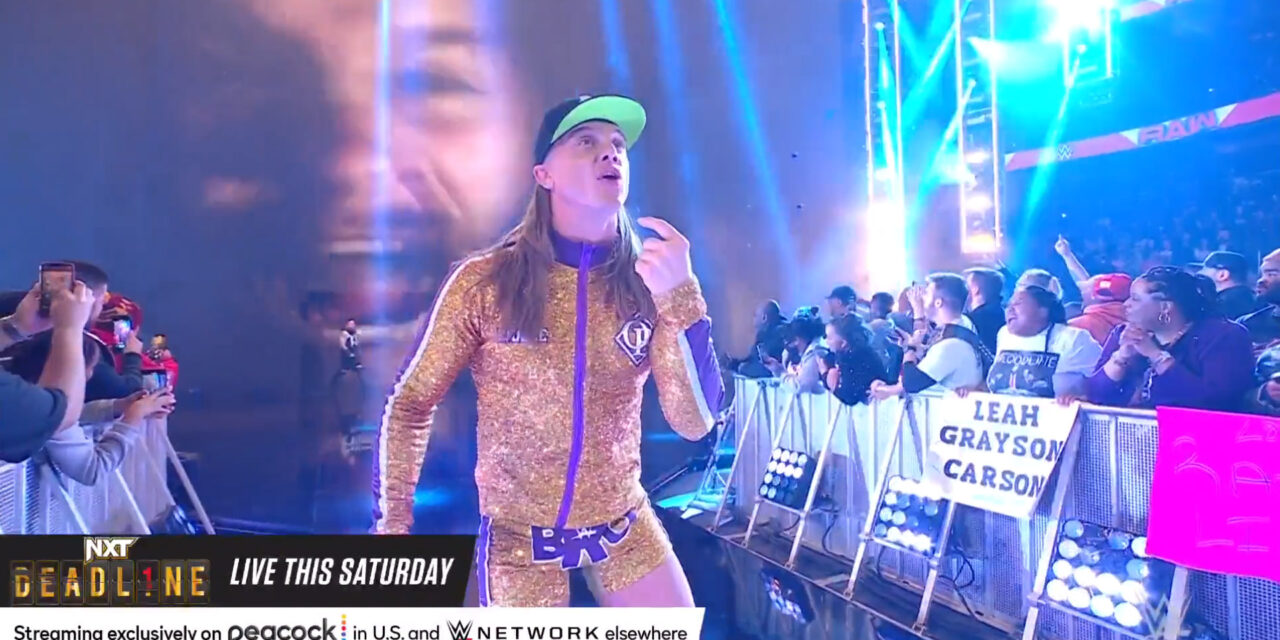 No time to waste – it’s straight to match time tonight in D.C.

Before the match starts, we get footage from the parking lot, from earlier today, of the Bloodline arriving. Riddle nearly runs them over with his scooter, then Elias pops out of his tour bus and is ripped to shreds.

Mic time in the ring before the action starts, and Riddle annoys me. Thankfully Kevin Owens joins to offset the pain.

So let’s fix that title…

Owens starts things off with a flurry. Usual offence from KO. Jey’s hand is still taped up by the way.

Owens dominates going into… say it with spirit… a commercial break.

Back from the break Owens continues to dominate but can’t get the three count. Matt tags in and plays Riddle Morton very quickly.

We really get into the WWE clockwork tag team formula from here. Various single and tag moves try to get Riddle down for three but it’s two-count city. Nice double-stuff Simmons Spinebuster nearly gets the duke.

We learn that Drew McIntyre is out of the match for SmackDown.

Jey gets another hot move as we head into yet another commercial break. Soon after, Owens gets the hot tag and nearly gets the duke after some top rope action. Fun fact – Corey Graves has held a championship in WWE more recently than KO.

Solo Sikoa gets involved, almost involuntarily. Superkick Party leads to the 1D and the duke for the brothers.

After the match, Riddle gets more beating until KO comes in with a chair and chases off the majority of the Bloodline, leaving Riddle and Sikoa alone. Sikoa finishes things off with the Umaga tribute Samoan Spike… ok check that he wasn’t done. Hip attack is followed by Riddle getting his head Pillmanized. Stretcher job for Riddle, and hopefully he now goes into gimmick rehab.

That was straight up vicious, and Sikoa has officially arrived. Love the continuity of the Umaga tribute as well.

This, by the way, was the first half hour of Raw. I think the roster is thin tonight again.

Backstage, Papi (or apparently Mami this week…) is with her boys and cuts a decent promo.

Backstage, we watch JBL’s Poker Invitational start. Is Dom Mysterio even old enough to gamble? Dexter Lumis dumps all of Miz’s money on the table, and apparently he’s bought in.

Bayley vs. Rhea Ripley vs. Asuka

Bayley arrives to the ring and Becky Lynch comes through the crowd and starts a little promo fun. Mami meets Becks in the aisleway to tease something for later on. Fun.

With the preamble out of the way, and Asuka looking like a jobber, the match gets underway. The winner, by the way, gets the winner of a second triple threat later tonight, next week in a Number One Contender’s Match.

Bayley tries for the What’s Wrong with Wrestling roll-up but Mami holds onto the ropes to block.

Ripley is physically imposing and having her way with the two others. Seriously, this is squash level until the two others team up to get Ripley out of the equation. Asuka misses the flying butt attack and everyone’s on the outside when Mami hits the Foleysault to get to the commercial break.

Coming back from the sponsor time, it’s now Ripley and Bayley working together to stifle Asuka for some bizarre reason. Asuka botches a Hardy attack. Codebreaker to Ripley gets two for Asuka soon after. Alternating Yes Kicks ends with another rollup attempt by Bayley.

Asuka goes for the Cross Armbreaker but Bayley interrupts with a second rope Savage Elbow. That effort gets a two-count by the way. More near falls but the crowd just isn’t into this action and I don’t blame them.

Eventually it’s back to Bayley and Asuka in the ring by themselves. Roseplant gets the duke for Bayley, to the shock of no one given what happened before the match began. Bold prediction – Becky wins the other match.

After the match, Rhea gets more shots in on Asuka. Appropriate Simpsons line – stop kicking him, he’s already dead!

Seth Rollins is out as it’s announced that he will face Bobby Lashley next week in a United States Title Number One Contender’s Match.

The fun doesn’t last long before Lashley comes out. The hometown hero gets a much better reaction that most.

Rollins gets under Lashley’s skin in short order and the fisticuffs fly. Pullapart efforts finally get the two separated… momentarily… ok this is becoming way too cliche. I feel like we’re seeing this every week. Lashley eventually spears Petey Williams (even ID’d by the commentary team).

Mustafa Ali enters the picture and ends up getting a U.S. Title Match out of his interaction.

Back from break, we’re at the poker table. Dom gets annoying with Akira Tozawa. We’re getting a match between the two later.

Ali starts hot, including with a Suicide Dive. Crowd is dead again as we head to the commercial break… again…

Ali has the advantage coming out of the break and hits a variety of good moves but can’t put Theory away. Top rope Rana looks like it was supposed to be caught by Theory, leading into a pancake, but it’s botch time. Ali hits a reversal DDT soon after for a two. Theory takes advantage of Ali being hung on the outside in the Tree of Woe and brutalizes him before Dolph Ziggler invades the ring and takes the champ out.

Bad match, surprisingly bad from these two in fact.

Post-match, Ali looks around in disbelief and rightfully jaws at Ziggler. Theory attacks Ziggler afterward and again takes out Ali. A-Town Down puts the invading Ziggler out. Theory looks great in the end but I’m very confused as to what happens with Ziggler.

Backstage, JBL is on the phone. Miz interrupts and wants in the tourney but doesn’t have cash. So apparently, now we’re getting broke Miz.

The tourney continues after the break and we see Baron Corbin and AJ Styles get into a skirmish.

Bianca Belair is backstage with Cathy Kelley. Belair has her usual confident promo.

JBL is on commentary. Styles takes it hard to Corbin quickly, leading to NEVER Champion Karl Anderson and Chad Gable squaring off. Tags get more frequent and we get a shoosh-nerd soundoff between Gable and Gallows.

Anderson falls victim soon after to the heels. Anderson fights off Corbin momentarily but doesn’t go for the tag in usual face non-logic. Corbin gets a near fall.

Back from yet another commercial break, Corbin nails Styles with a stiff hand for a two count while JBL rants about flippy-floppy Superstars. None, by the way, are in the ring.

Deep Six by Corbin off an Irish Whip from Gable gets two. Nice combo though. Otis comes in and becomes the fall guy. Styles tags out to Gallows and the crowd goes mild. Gallows, then Anderson, takes out everyone but can’t get three. Gable turns the ties and gets an Ankle Lock momentarily, but soon after walks into an Anderson Spinebuster. Corbin takes over on The OC but ends up being taken out by Gallows. Otis manhandles Gallows but eats a Phenomenal Forearm. Gable gets a massive German on Styles, and is left in the ring with Anderson.

This match feels like it’s been going forever as the crowd continues to sit on their hands.

Magic Killer gets the pin on Gable for the win, mercifully.

Backstage Alexa Bliss gets ready for action while the Wyatt-6 logo flashes on a monitor in the background.

Back from break, Saxton chats with Candice LeRae, who will face IYO SKY next week. Johnny Gargano and Dexter Lumis enter the picture and we get a mini reunion of The Way.

Tozawa has completed his transformation back to his original character in WWE with all the yelling.

The action starts quickly and we don’t get long in the ring before the action spills outside.

The faces have a few confrontations as they rally for the win. Cross gets some action in but really doesn’t feel like a threat.

More schmozz stuff reminds me why the Triple Threat is overdone (oh and by the way we’re getting two more tomorrow on NXT). Kai-n-Sky come out to run amok, but it ultimately leads to Alexa Bliss getting the duke via Twisted Bliss. Okay, I was wrong with my initial prediction. I hope this signals a heel turn for Bliss.

The two wins in the women’s matches were admittedly surprising and have me curious for next week. This week, however, was somewhat mediocre. For whatever reason, the Raw roster feels even thinner now than when McMahon was in power, despite all the roster hires and ascensions by Trips. Yes, there are some major injuries but it’s not an excuse. There are more than enough roster members to fill voids.

We’ll see you in two weeks. Until then, stay classy.