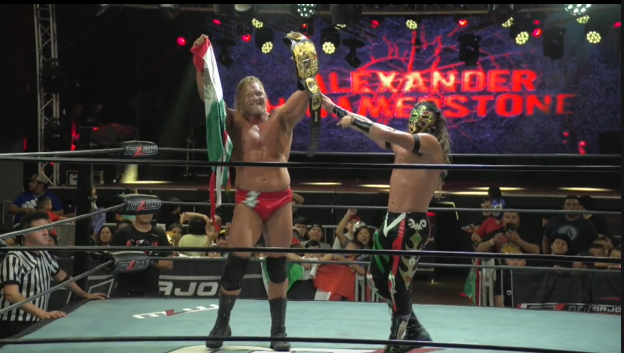 As we begin the night, I’m a fan of the theme song playing because it’s a banger. They choose a very good one. Anyway, Taya Valkyrie, our Women’s World Featherweight Champion, is here to watch the upcoming match between four Luchadoras to see who will snatch that first contender spot.

At commentary, we asked who would Taya want to face for her championship and she answered by saying she hasn’t fought Lady Shani in a while, so she’d be Valkyrie’s top pick.

The bell rings and the match is underway as Shani and La Hiedra attempt at knocking Flammer out by playing a double team, yet Flammer manages to avoid the collision and flips Reina over.

I came into this fight completely winded because I’ve never seen this many Luchadores in one match. I feel strangely blessed. Ha!

Anyway, La Hiedra has been caught by Flammer, who seems to have to most momentum in this match, to twist her arm then performs a leg drop. These two were in the middle of the ring punching each other one minute then kissing the next, which was a shock because I didn’t understand it. Suddenly, Hiedra and Flammer are snatched into two roll ups by Lady Shani and Reina Dorado.

Since that didn’t work, Dorado and Shani leap between the ropes and land on their opponents on the floor.

La Hiedra is in trouble as Dorado jams a few kicks to the side of her head, which almost grants her the win until Lady Flammer intercepts with a quick slap to Reina’s lower back.

Shani has Flammer’s legs held tightly for a chance to submit as Hiedra has Dorado as well, given the win is for a singular person, how will this end for both women? Too bad we can’t have two winners since they were trying to one-up each other. Ah. Such is life… They all get ducked in the head though.

Now, all four luchadores are kneeled in the center of the ring as they chop one another as if we’re playing Duck, Duck, Goose. Only this game you’d like to avoid it.

Reina and Lady Flammer seemed to be working together for the most part against Shani and La Hiedra during this submission move having their legs crossed and bended. Ouch.

Dorado and Flammer were on the same page until the submission maneuver failed, they decided to brawl it out. They bounce off the ropes to deliver a brutal clothesline only to be met with a double standard of dizziness. Yep, that hurt. They go for a cross body, but Dorado and Flammer end up colliding again.

Lady Shani and La Hiedra have Reina on the top turnbuckles as they prepare to suplex her onto her back. It looked like Shani and Hiedra got the worst end of that exchange, but it isn’t over yet, Lady Flammer frog splashes onto Dorado for the winning contender’s spot. She was the toughest one, honestly.

She’s the winner of this match, but she went in deeper by attacking Taya from behind when she tried to back off. The officials were there to stop the altercation real quick. Oof that didn’t go as far as I wanted.. boo.

As we move on from that, the Samoan SWAT Team are having a great time in the sun as they address that Juicy Finau and Lance Anoa’i should be demanding an opportunity at the tag team titles. But for that, they need to prove that they can get it. Quite frankly, I think they have, but I’m not the one making the decisions. The burden of this is too much. Ha!

Somewhere in the parking lot, EJ Nduka is being interviewed on his actions last week. He  attacked Alex Hammerstone and put him through as table. He says he’s been here and waiting for a chance to challenge Hammerstone for his title belt, but Nduka has been sidelined. The assault was to remind Hammerstone that he has another more equally, if not not more dangerous threat he needs to worry about. The whack to Alex’s head with EJ’s title belt was an alarm clock warning.

While watching Nduka talk, I kept wondering why the camera continued to move downwards, so EJ could look like a giant. I also caught his spit at the beginning… Gross.

Pfft. He just wants people to remember who he is, and that’s “Judgmental Earl”. His new name. Like it?

Ah, Mance Warner is here too… by a dumpster. Speaks accuracy. Warner is still on the boat about his gossip line going viral by inviting, or interrupting, this guy named Josh. The majority of time this man is on screen I get slightly bored, yet not completely because I like his accent. That’s the only complement he’s getting. Apparently, he’s having beer with Drew Galloway later. Wow. That’s… great for you, Warner.

What would have worked as good gossip for Warner is if he mentioned that Shun Skywalker, who will be debuting soon, wants to challenge Myron Reed for the World Middleweight Championship. That would have kept me awake…

So, Reed accepts Skywalker’s challenge as one should. Yay!

Oh, oh, Alex Kane is still pissed for losing to Davey Richards, yet he believes Richards didn’t win nothing. He says that Davey is “Swimming in a pool of his own blood”. Oof, graphic. I also call that being delusional. Poor Kane. That’s not how you should go.

The mystery behind the suspicious calling cards continue. Of all people to be attacked next, I never thought it would be Killer Kross. A business card was left next to his bruised body backstage repeatedly written “AV” or “OV” on it. So, Kross’ upcoming match has been cancelled as he’s on his way to the hospital.

I adore mystery and ominous occurrences, so I’m excited to see who’s been leaving those cards. Does anyone have any guesses? Is it a newcomer or veteran wrestler? Maybe someone else entirely? We’ll have to wait…

Although, Hammerstone is marvelous as the champ, the fans are hoping for a new victor. Bandido has won numerous championships, but that alone isn’t enough to hold the gold. Alex still has his title belt, while Bandido lost his. It’s a competition of character rather than who won more. Or at least it should be.

Speaking of competitions, Bandido and Hammerstone kept trying to see who has a better grip around the waist by consistently racing behind one another’s backside. It fails eventually with a shoulder tackle by Alex and an arm drag right after.

Bandido looks to leap from between the ropes, but Hammerstone blocks him with a harsh right hand to the jaw.

Because of last week’s attack orchestrated by EJ Nduka, we would think Hammerstone isn’t fit enough for this match, shockingly, it hasn’t bothered him. But as the match progresses, we could see a significant difference in his stamina. Yet not before he throws Bandido jaw first into the metal gates surrounding the audience. Big ouchy.

Bandido comes back with a boot to Hammerstone’s face followed by an upper cut then a high flying cross body that doesn’t land him a win. Hammerstone retaliates with a belly-to-belly throw after another to tire Bandido down. Alex is showing the effects of the table slam he endured at the hands of Nduka, he kept favoring his lower back during the match. That could cost him if he takes to long to execute his moves.

Surprise, surprise. That happens. Bandido has Hammerstone up in the air as he plummets the champ on his spine, but that doesn’t grant him the victory. He also didn’t see the wicked elbow counter Hammerstone sends him.

Bandido manages to swerve through Alex’s attempt at ploughing him and plants Hammerstone into submission by grabbing both his legs and sitting on his already sore back.

Alex had Bandido seeing stars when he performs his Burning Hammer move, but the challenger kicks out in time to Alex’s dismay.

The crowd was cheering as Bandido put Hammerstone through three vertical suplexes before climbing to the top turnbuckles with a frog splash that doesn’t connect with a win.

Hammerstone shocks us with whatever power he has left to deliver the Nightmare Pendulum maneuver to Bandido for a successful win at retaining his championship belt. Well done!

Bandido seems to think so too. He congratulates Hammerstone on the victory because he deserves it, and he shows that week after week. All the Mexicans sing for Hammerstone for an amazing battle as he shows respect in return by holding the Mexican flag high. Bandido put one hell of a fight.

After the match, Alex has a chat with an interviewer about his record breaking title defenses, but EJ Nduka won’t have none of that. Nope. He stomps in with a steel chair in hand, ready to bash Hammerstone in. Unfortunately for EJ, Alex senses it and kicks the chair back into Nduka’s face.

That encourages a brawl between the two at the entranceway ramp. Security and referees are out here trying to separate them. And while that’s happening, there’s another calling card attack backstage. Mr. Thomas from the Boom-Ay-Hey Fight Club appears to be one of the many victims found by Cesar Durna and his red mask-wearing Luchador friends at the stairwell. What the hell is going on? Madness at its finesse.