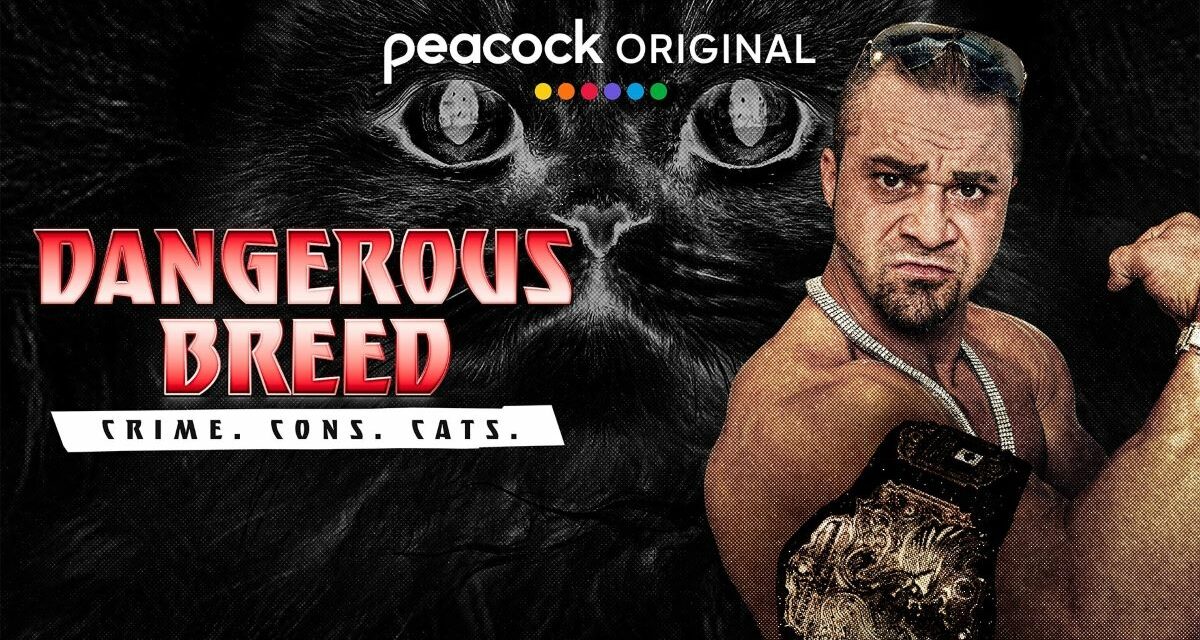 In the sport of professional wrestling, there are tons of outrageous characters. In terms of third-generation superstars, none has risen to levels of infamy quite like Teddy Hart, of the legendary Hart Family.

Most of his exploits in and out of the ring have been covered quite extensively, including his time with the MatRats teenage promotion, a WWE deal, and then an inability to make it big for any length of time. ,

A new documentary, Dangerous Breed: Crime. Cons. Cats, shows a darker side of the Hart scion amid a backdrop of marijuana paraphernalia, pro-wrestling, and Persian cats. It was just released on the Peacock streaming channel.

Per Peacock’s blog, the bio for the docuseries read as thus:

Dangerous Breed: Crime. Cons. Cats. offers an intimate look into the life of controversial pro-wrestler Teddy Hart as his layers are peeled back to expose his unique and fascinating world. We know audiences will become intensely invested in this bizarre story of fame, scandal and mystery.

At first glance, this feels similar in tone to other docuseries like Tiger King, but upon watching the show, there is a lot that is revealing, and a lot of questions are brought up and sometimes left unanswered.

The genesis of this show is the result of Frederick Kroetsch, a Canadian filmmaker and producer who spent around ten years covering Teddy Hart in the hopes of pitching his unique lifestyle and his raising of Persian show cats as a reality TV series. During that time, Hart get accused of crimes of sexual battery by two of his former partners/lovers. One of Hart’s protégés, Samantha Fiddler, who was romantically involved with Hart at one point and then disappeared under mysterious circumstances, becomes the focus, with Kroetsch trying to get to the bottom of this mystery and believing that Hart has knowledge of what happened to her.

Again, it feels like Tiger King, but with cats in the backdrop (and they are certainly in the backdrop as Kroetsch notes he had “50-100 cats” at his mansion), but it’s not quite that.

In the first episode, “Part One: A Tall Tale”, we see Kroetsch wanting to get to the next level of his filmmaking, wanting to do a reality series. He states he was encouraged to check out a local indie show and from there he meets Hart and films his world, which includes raising the aforementioned cats as a side hustle, as well as running a pro-wrestling school (although what footage there was shows little training), and then his polyamorous lifestyle with his wife Fay and girlfriend Michelle.

Then Kroetsch finally gets a TV deal for Hart in 2014, with the hook being he’ll receive his redemption in the fans and wrestling world’s eyes. That was when Hart is hit with charges of sexual assault by the same women he’s had a relationship with, and he is living with a protégé by the name of Michiko in the Dallas, Texas, area, away from Canadian law. Kroetsch catches up with Hart and persuades him to return back to face the law, but during that time he films in Dallas some instances things are not so rosy with Hart and Michiko. As the first part end, he returns to Canada and is handcuffed and led to jail, while Michiko and his Persian cat, Mr. Money, are deported back to the United States.

In the second episode, “Part Two: The Nine Lives of a Teddy Hart”, Hart is in jail for a few days before being bailed out and living with a friend, Bill Kazoleas. As he tries to get his life organized and still raise his cats in Kazoleas’ house, he meets Samantha Fiddler and then the two become an item, despite the charges he faces. He and Fiddler start to make a life together, and he is involved in her and her three children’s lives. They make plans to go to Florida to train with the hopes that she will become an MMA fighter/wrestler. Also, Hart faces a pretrial hearing to see if the issue will go to court, and he manages to stave off the charges.  So now he is in the clear and they pursue their wrestling dreams.

That’s where things change gears, and the focus turns to Fiddler’s disappearance.

In the last episode, “Part Three:  Cat & Mouse”, Kroetsch tries to find Fiddler as her family asks him for help. He then goes Internet sleuthing, trying to track down her timeline from when she went to Florida with Hart to when she was last seen leaving a facility where she was detained for trespassing and then never seen after that. Kroetsch goes to Dallas where Hart is now living and confronts him with his findings and asks him about what happened to Fiddler. While Hart answers, there is footage that gets spliced in accumulated from the time Kroetsch filmed him along with other home videos he obtained that contradict everything Hart says.

When everything is said and done, Fiddler is still missing (spoiler alert), and Hart looks further away from ever getting his “redemption” on the small screen.  SlamWrestling.net attempted to reach out to Hart regarding his portrayal but was told off the record his attorneys advised against him speaking to the press at this time.

Overall, the docuseries is a very titillating show that offers an over-the-top character and teases a mystery, but it leaves a lot of questions open. Chief among them is the fact that this show was produced by Blumhouse, in association with WWE (where Hart had a deal back circa 1999), and when you look at it through that lens it makes one wonder why they took on this project, even though it makes them look biased to any involvement with Hart. Also, The Hart Family name gets bandied around but — his mother is Georgia Hart and father is B.J. Annis — other than a scene with a cookout at his parent’s place, no other Hart member comes to his defense. As for the theme of redemption, while Hart has yet to receive it, you suspect Kroetsch did this as a way of unburdening himself from shooting all that footage and could be dealing with the pangs of guilt for his indirect involvement. Whether he achieves it or not, or even found some solace, is a subject for ethics professors at universities to bandy about in their classrooms.

As for the docuseries itself, you may have feelings about it one way or another, but you cannot look away from all the drama that is Teddy Hart’s world.