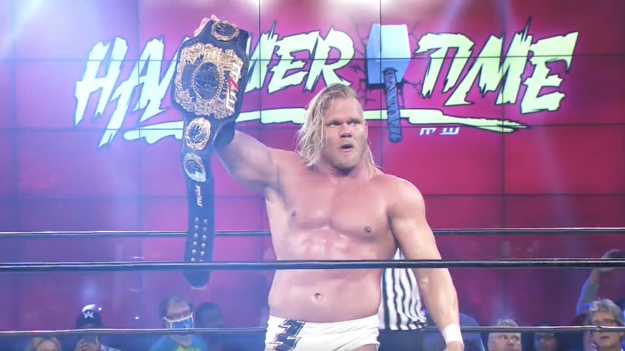 How are you doing? As we start off the night, Alex Hammerstone takes us down memory lane on his past friendship with Richard Holliday and the creation of The Dynasty. Someone Hammerstone truly considered his closest companion… that is until he became vain and self-centered.

Holliday had hidden jealously laying dormant inside him for longer than the champ thought. So, they come together later tonight for the fight of their lives for the Heavyweight Championship as the audience sees how this friendship was sadly all in Hammerstone’s head.

Given how Blake attacked Valkyrie from behind last week, proving her statement of challenging the champ, she got it. Brittany decides to go after Taya before her introduction was finished. Typical cheap shot…

Blake marks her territory by choking Taya with her feet up against her throat then proceeds to wrapping her legs around the champ’s waist as she sits on the mat and chokes her with a red ribbon. The people at commentary thought that Brittany’s methods were “sinister” but Taya retaliates with a hard chop to Blake’s chest as you hear the smacking sound ring across the room. That’s brutally sweet.

Taya looks like a hard competitor to fight against. She’s a goddamn goddess. Valkyrie performs a running hip attack to Blake’s face but she doesn’t remove herself too early. She shoves her ass in Brittany’s face for good measure. Normally some individuals would like that… I find it both weird and effective.

Blake during the majority of the battle likes to focus on Valkyrie’s throat, giving less and less time for Taya to breathe. The champion does manage to spear her challenger, which is followed by an impressive submission move to pressure Brittany to tap out, unfortunately, she grabs the bottom rope in time.

Brittany goes for a DDT, but Taya counters with a wonderful German Suplex. Taya thought this was over, but her opponent got back up to place Valkyrie into an arm submission, which Taya releases herself from.

Valkyrie curb stomps Blake from behind, twists her legs into a knot, sits on her back, yanks Brittany from her neck allowing her to tap out almost immediately. This rewards Taya with an amazing win to retain her title. Brittany tried, but this was Taya’s stage.

The mystery of the unconscious wrestlers found backstage were identified, at least to me, as Budd Heavy and Calvin Tankman. The attackers left a calling card at the scene of both assaults for random pass goers to find. “AV” or “VO” is written on the label.

The brawlers are left with severe trauma due to these sudden signs of barbarity. Who’s behind this? I do love a great mystery, so I’m intrigued to see the reveal.

As we move on from the eeriness, we are presented with the beginnings of EJ “The Judge” Nduka. He came from Nigeria with his family, who had nothing at the start, which got him to know humility in life. Nduka becoming a wrestler was a long time coming.

His thoughts on the upcoming fight between Holliday and Hammerstone is something he’s looking forward to even though his mind is questioning why isn’t he in this matchup? He played it off as a joke, that the only reason he’ll be watching is to scout the talent and not unravel his ulterior motives. Hm-hm. I see you, Nduka. I know your tricks.

But someone else seems to have beaten you to it, the holder of the mystery calling card was seen stalking Hammerstone backstage. Oooh, Spooky. And to further talk about spookiness, a wrestler from Dragon’s Gate, Shun Skywalker, will be coming to MLW as part of their challenge, invasion, something like that.

Anyway, for some reason Mance Warner is in the parking lot to help promote his hotline on gimmicks, or rather gossip, I think.

We’ve reached the second and final match of the evening we’ve been waiting for as well. Nduka delivered on his promise to be there in the audience watching this match, he looked disgusted at Holliday when he came out with his girlfriend as they proceed to make out as if we asked. Oof. The tremendous amount of arrogance emoting out of Richard is too much.

Once the bell rings, Hammerstone stumps his way towards Holliday, who, obviously, attempts to exit the ring. Dodging the champ. Richard insensitively asks if Alex is stable enough to fight, which renders the crowd impatient and clear sighted to his mind games.

Finally the battle begins with a quick shot to Hammerstone’s ribs followed by numerous punches to the injured area. Of course, he would fight dirty. Holliday even rams his shoulder into Alex’s ribcage like some bull. Applies perfectly to Holliday’s lack of personality.

Richard took a great portion of the fight targeting Hammerstone’s bruised pain, but Alex comes back with a vertical suplex on the ground floor to put Holliday down. I laughed when Richard cried after getting hit on his lower back as if he’s in agony.

Later on, the match was taking place backstage as Hammerstone punches Richard up the concrete stairs. Falls count anywhere, so this could go to Jupiter if it wanted to. Maybe in Batman’s Batcave as well.

While on the roof, Holliday tries to throw Alex off the railing. I can’t even imagine what the neighbors looking outside their windows are thinking. “Honey. I think I’m going insane. I see two very sweaty men fighting no less than 15 feet from us… And one of them looks like he’s balding.”

Alex manages to avoid being thrown like mushroom stew as he brings Holliday back inside the building. Pure craziness is happening here, and I love it. Want to know what else I shockingly loved? After Hammerstone tossed Richard in the ring, this one man sitting in the audience was smiling as he filmed himself and a pain throbbing Hammerstone on his phone with no remorse. Ha! I strangely found that hilarious because of how gut-wrenching Alex’s face was and this man was SMILING, having a marvelous evening.

What came off as even weirder is that Richard didn’t know, or didn’t care, that he was imitating Randy Orton’s famous DDT move using the middle rope for a cover that didn’t grant him anything. Insulting. Ghastly. Shameless.

Richard was amused by the torment he was inflicting upon the champ, even though Hammerstone kicked out of the cover. Holliday took it further by removing the biding around Alex’s ribs then pursues to whip him with it. The sadist. This match is about beating the fact that Holliday made Hammerstone, which I believe to be untrue. The amount of delusion in that man’s mind is befuddling to the degree of a mental seizure.

No matter the abuse from Holliday, Hammerstone does gain momentum with a drop kick and a face plant using his knee before Richard goes on the retreat backstage.

Richard calls Hammerstone a “big douched-up b*tch” like the whiny, colorless bastard he is when Alex wouldn’t remain passed out with the aid of an unplugged cable.

Holliday puts Hammerstone through a Hyro Driver move on the ramp to end this match but Alex still has some relentlessness left in him. Good on you. Even better once Alex throws Holliday into a suplex and a powerbomb.

The challenger mistakenly decides to face slap Hammerstone, which results in them both exchanging punches. That quickly stops once Holliday kicks Alex’s abdomen, which the champ follows by a clothesline and The Torturer move that grants him the victory! See? Holliday wasn’t that scary.

EJ Nduka was impressed, as was I. He asks for a title shot and a weary Hammerstone agrees. When Hammerstone’s back is turned EJ attacks Hammerstone slamming him on a table that doesn’t break. I. AM. THE. TABLE. Officials lead Hammerstone away but EJ drags Hammerstone back to the ring and slams him through the table…which splinters this time.

You know, when Alex agreed that he and Nduka should brawl each other, Hammerstone almost called EJ “AJ”. Can’t say now he doesn’t deserve to be labelled as someone else.

Do you feel strong, Nduka? Do you feel dominant now? Because all I saw was cowardness and cockiness over a man who I know will come back to break you.