Comic book version of The New Day too quiet 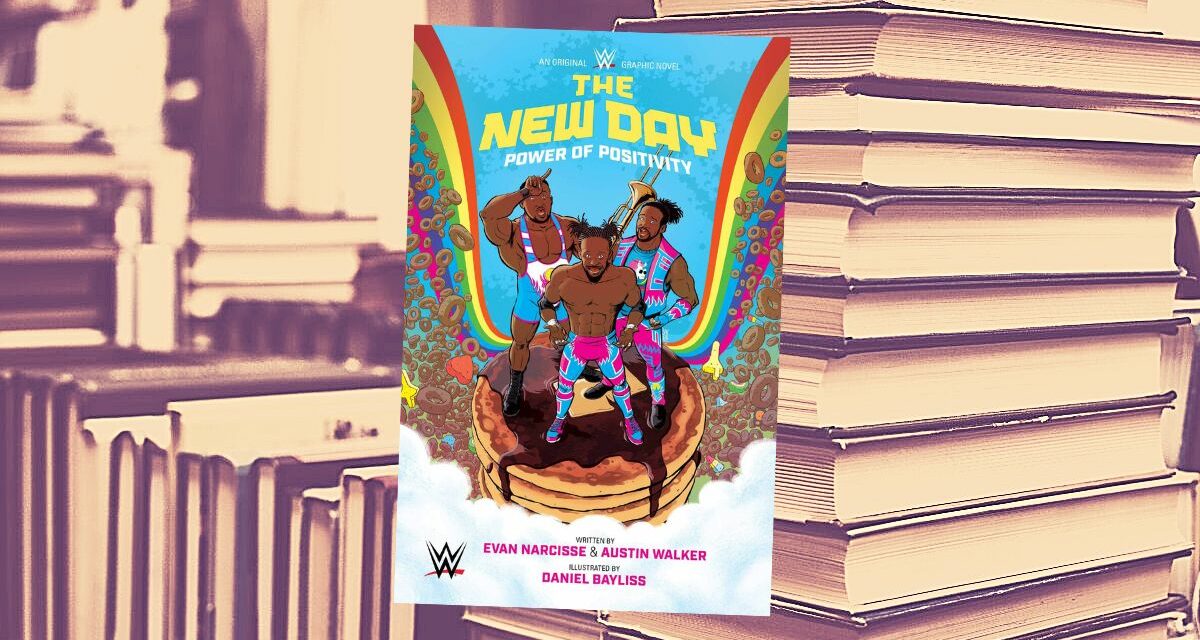 We are blessed in Toronto with a great public library system, and I regularly check online for new additions to the collection, things that might interest me, from biographies of sports personalities to music books and music CDs (I’m old). But it’s the graphic novels that I love.

I’d be really broke if I bought all the latest things from Marvel or DC that I want to read, and I tend to save that discretionary income for smaller companies or authors/artists I truly like (hello Skottie Young!).

So the Toronto Public Library fills a wonderful role in my life, and always has. I’ve helped out with Leading to Reading programs, gone to seminars and presentations, and we even did the book launch for my son’s Duck with the Puck at the local branch, at the insistence of one of the librarians.

The other day, I checked out WWE: The New Day: Power of Positivity, which is a collection of comics about The New Day — Kofi Kingston, Xavier Woods and Big E — from BOOM! Studios. The comics were released in stories individually but I don’t ever remember seeing them in my local shop, which probably speaks more to them knowing their clientele than anything else.

But that was also my thought process as I read it. Who is this for? It’s simple enough for kids, but not aimed at them. It’s not a deep, dark dive behind the scenes either, so not for the hardcore fan.

Then there’s the other question: What is the end game, the goal of this? Is it to promote The New Day and bring new viewers to WWE programming? Is it to inspire and show what’s possible?

On a sheer entertainment level, WWE: The New Day: Power of Positivity was okay. If you knew nothing about The New Day, you’d be lost. If you know way too much, like a jaded wrestling writer, then you question too much, ruining the fun.

And it’s a fun read.

The writers are Evan Narcisse (Rise of The Black Panther) and Austin Walker (Friends At The Table). I enjoyed the gentle teasing they did of the WWE writers, without naming or shaming anyone. Instead, it was about some of the silly gimmicks presented to Kofi Kingston, Xavier Woods and Big E through the years, how they came together as a team, and overcame the sheer weight of the religious-themed positivity origins of The New Day (notably, “God” is never mentioned in the book, and it’s vague references to a preacher or “Sunday stuff”) and simply became better extensions of their fun-loving personalities.

The overall lesson is summed up: “We got to be ourselves.”

It tries to walk a tricky line, never revealing that the actual in-ring work is predetermined, but at the same time, presents the scriptwriters as the people coming up with ideas and Triple H as the authority figure they have to impress in order to reach the next level(s). There are hints of their real lives, but never the full story — a biography this is not. For example, Kingston addresses his greater Ghanaian background only in a roundabout way, never outright, and certainly not giving his real name (Kofi Nahaje Sarkodie-Mensah). He’s shown as coming up through the indy scene and getting his break in WWE … but his comrades don’t get the same background. 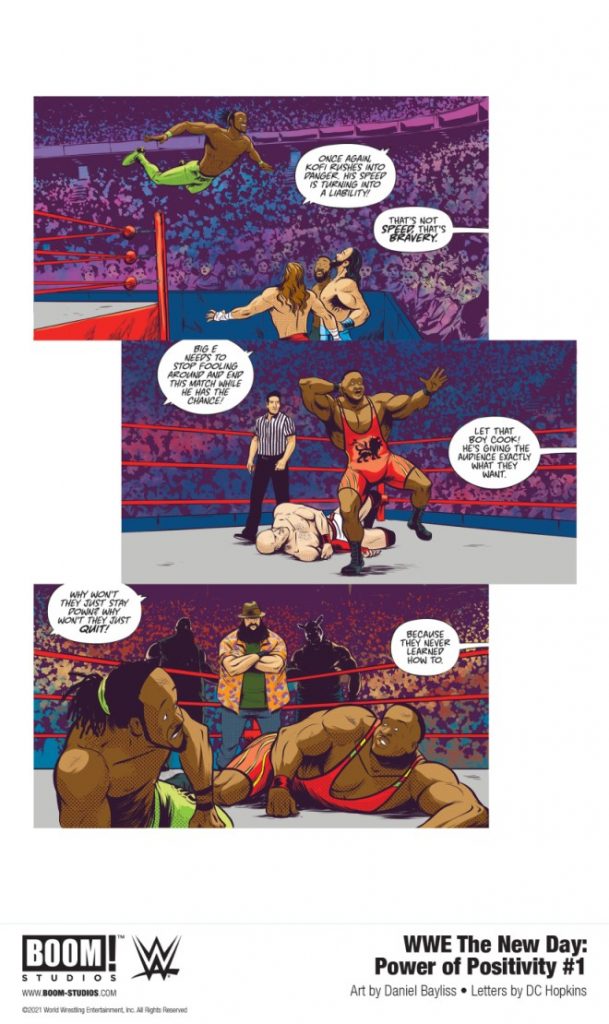 The art by Daniel Bayliss (Mighty Morphin Power Rangers) is lively, creative and very colorful, so visually it’s appealing, but, if anything, the real stories of the three members of The New Day could have been more colorful. And, when I think about The New Day on Raw or Smackdown, I think of noise, whether it’s the trombone or the reactions of the crowds or a brazen promo, and that can’t come across on the written page.

It’s been a while since we’ve seen The New Day together as a unit wrestling in WWE, for a few reasons. For one, they were sent to different brands. But then Big E was seriously injured, to the point where he might not wrestle again, in a mishap with Ridge Holland’s overhead belly-to-belly suplex in March 2022. There’s no question to a serious fan that that accident looms over the graphic novel, and, in a bit of foreshadowing, Big E actually preaches about the importance of protecting one’s neck in the ring.

WWE: The New Day: Power of Positivity is what it is, like a lot of WWE comic book projects that I’ve read. They are okay while you’re reading, but in the end, they don’t really stick with you.