AEW Spectrum a gorgeous but risky box of cards 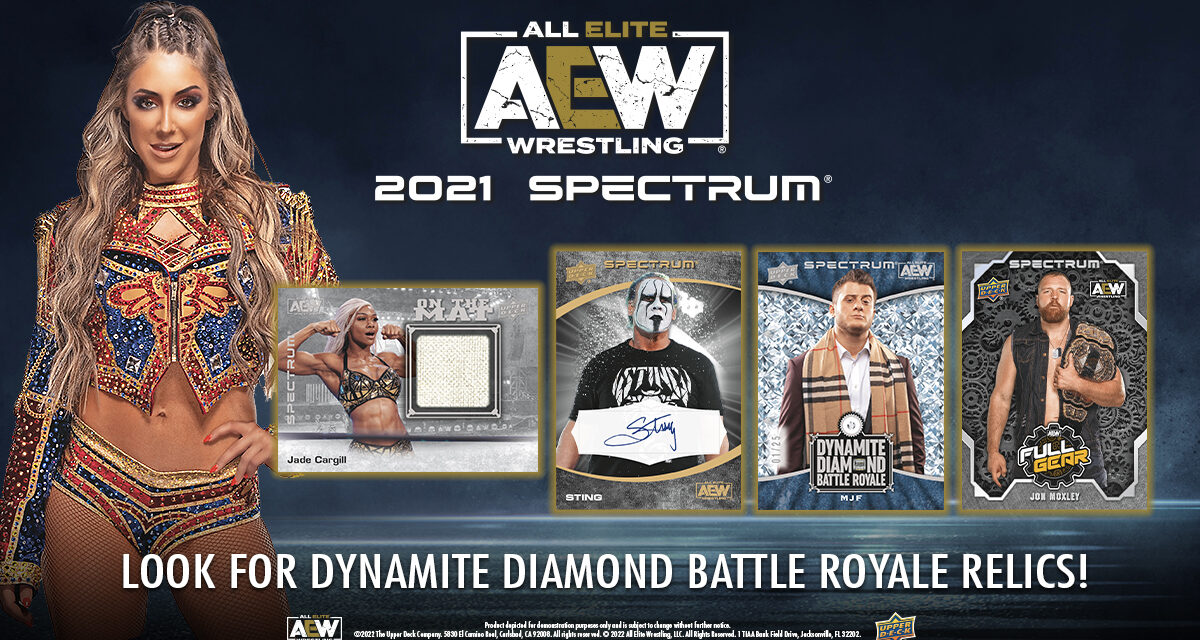 Since the inaugural release of 2021 Upper Deck AEW in January, wrestling card collectors and AEW fans have been eagerly awaiting a new AEW wrestling card release, besides the ongoing Match Dated Moments and New Arrivals sets on epack.

Spectrum is a brand that has existed within sports cards for years, but this marks the first time Upper Deck made a version of Spectrum dedicated exclusively to professional wrestling. For those who don’t already know, Upper Deck Spectrum is a premium brand of trading cards, which translates to fewer cards and a higher price tag per box. To be specific, one box of 2021 Upper Deck AEW Spectrum contains one pack of cards, containing a total of seven AEW trading cards, for the average price of $300 per box. Each box/pack of seven cards promises three regular base cards, one numbered base set parallel card, one autograph card, one memorabilia card, and one additional numbered base set, memorabilia insert, or metal insert card.

The checklist of AEW Spectrum is rather large, and it varies widely. The potential highs are very high but the potential lows are low, so I would say this is not a set for casual fans or collectors. You might get lucky and pull a once in a lifetime hit, like an MJF Diamond Dynamite Battle Royal relic autograph, which contains an actual piece of a real diamond embedded in the card.

Chances are, you will not recoup the value of what you paid for a box, so if you are concerned with return on investment, this is not the trading card product for you, but if you’re a fan of AEW and you’re looking for an exciting, premium pack of wrestling cards, and $300 isn’t going break your bank, 2021 Upper Deck AEW Spectrum is worth the risk.

I pre-ordered one box of 2021 Upper Deck AEW Spectrum on February 17, 2022, so when my box finally arrived on November 2, 2022, after multiple delays, it felt like Christmas came early. I couldn’t wait to drive home from work and oh so carefully open my pack, and hold these thick, premium stock wrestling cards in my hands, but knowing there were only seven cards in the pack, I made a point to take my time and really savor each and every card. 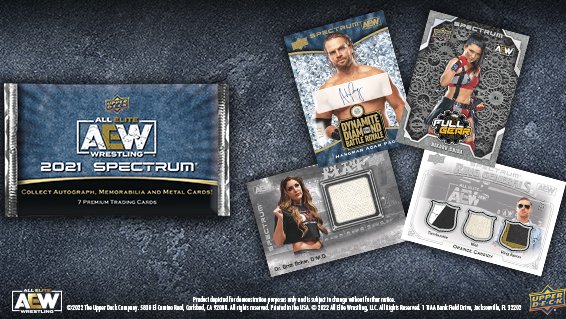 The first card in my pack of 2021 Upper Deck AEW Spectrum was a base card of the “Bad Boy” Joey Janela, which gave me a good little laugh. It’s been months since Janela was actually in AEW, but I didn’t mind this one bit, because I became a fan of Janela years before he joined AEW, and I remain a fan of his now that he’s returned to the independent scene, so in my opinion, this was a good sign of things to come. The next two cards were my other two regular base cards, of Serpentico and Oritz. I thought the Serpentico card was especially cool, since I’m pretty sure this is his very first wrestling card. The regular base cards in Spectrum are truly gorgeous. They’re thick and glossy with silver foil and a clean design. The card backs are nice and clean too, giving each wrestler’s name, height, weight, birth date and place, and a concise summary of their character.

The next card in my pack was my numbered base set parallel card, and for this, I got Wardlow, which I was very happy to receive. Wardlow was numbered out of 99, which Upper Deck calls a Dark parallel, even though the main difference I noticed was that the foil on the card was gold, rather than silver, but Upper Deck calls another, rarer parallel Gold. Even though Wardlow had cards in the first Upper Deck AEW set earlier this year, Spectrum is still a 2021 release, so technically, one might consider this another Wardlow rookie card, and a premium rookie at that, so I suspect these cards will be in high demand. 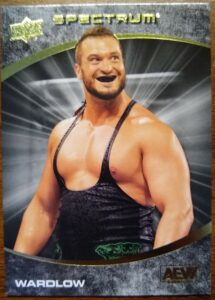 The card that followed was my first guaranteed hit of the box, a Ricky Starks autograph, numbered out of five! Starks’ blue autograph looks great paired with the light purple/pink foil on this card. This is what Upper Deck calls a Beach parallel, and I don’t mean to rave about every card in my box, but a low numbered parallel autograph of a young wrestler with as much potential as Starks is about as good as I could have asked for my sole autograph. 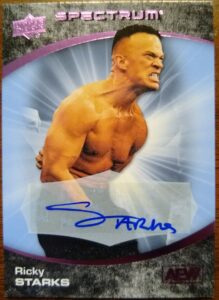 I was excited to pull my next card, because I could tell from the side of the pack that it wasn’t a standard paper trading card, but that it was a metal card, which turned out to be a Nyla Rose Full Gear metal insert. This is the very first metal trading card I’ve ever owned, so I was excited that it was a card of a groundbreaking wrestler as beloved as Nyla Rose. The 2021 Upper Deck AEW Spectrum set contains Full Gear and Chair Shots insert cards, both of which are AEW’s first metal inserts, so I was hoping to get one of these in my box. 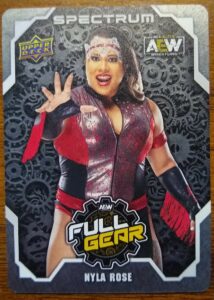 Finally, I pulled my seventh card of the pack, my guaranteed memorabilia card, and it was Cody Rhodes. The memorabilia swatch itself was dull, just a plain black piece of fabric, like were used in the first AEW set. I was really hoping Spectrum would provide a more varied palette for its memorabilia cards. The Spectrum box advertises the “first-ever premium memorabilia AEW cards,” and from what I’ve seen of other cards on the checklist, some of them are very colorful, but with this being a base, meaning non-numbered memorabilia card, I guess that means more black “napkins.” Once again, Rhodes obviously hasn’t been on AEW’s roster since February 2022, about nine months since this writing, but one can assume the 2021 Upper Deck AEW Spectrum checklist was produced well before his departure, but interestingly enough, Rhodes’ cards have become more collectible since his return to WWE at WrestleMania than they were during his time in AEW. I just found it particularly amusing that my pack of seven cards was bookended by two wrestlers who are no longer with AEW (Janela and Rhodes). 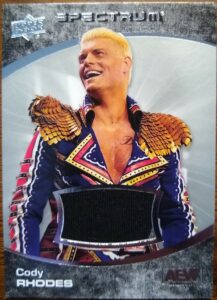 Overall, I was very happy with my box of 2021 Upper Deck AEW Spectrum, and I’m glad to have these cards in my collection. Could I have pulled “bigger” cards? Sure, but that’s always the gamble of opening wrestling cards.

Are these seven cards worth the $300 price tag of the box? I don’t know, and I honestly don’t care. I’m not a seller, I’m a collector, so value isn’t a priority for me, but if you’re concerned about return on investment, or if you’re a flipper, you might choose to skip this product.