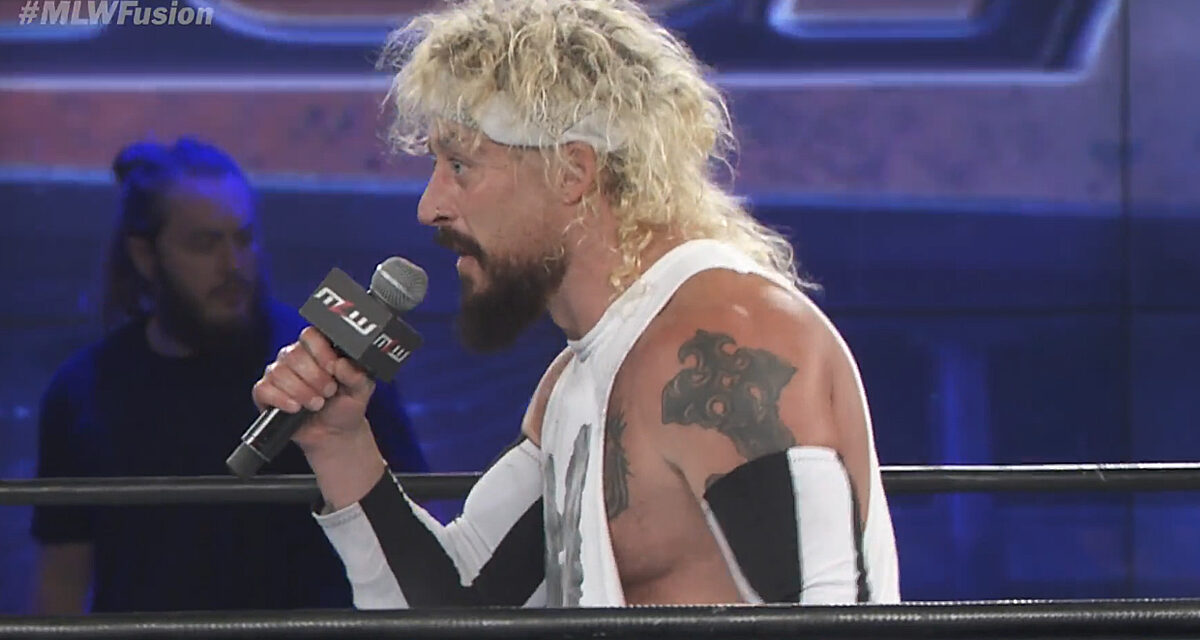 It’s my first time entering this side of the wrestling world for a brand other than NXT, WWE or AEW so… I’m ecstatic to begin and I can’t wait to bring all my weird notations from Smackdown to Major League Wrestling because it’s so much fun.

As Fatu arrives with his crew, the SSTs, as they are dramatically welcomed by luchadores at the door. The tall one gets hit in the balls. Wow. We’re off to a great start. Love it!

To be honest, I’ve never heard of a “Middleweight” championship before, but hell, it took me years to figure out what the dirty jokes in the first Shrek movie meant. Strange people…

Regardless of my lost brain I do like championship matches that contain multiple wrestlers due to how chaotic they can be. And speaking of chaotic, Arez… he creeped me out already. Ha! He kind of reminds me of a much more toned down version of a wrestler named The Boogeyman. He ate worms… gross.

As we begin, Reed has a hold on Lince before throwing him outside the ring then goes for La Estrella along with Arez’ help as they deliver chop after chops. Estrella retaliates in time by jumping off the ropes as splashes is opponents. He charges up using the ropes and leaps onto both Myron and Arez outside the ring, resulting in Estrella going over the  barricade. Hate to be those people getting someone’s butt in my face like that.. oof.

The Luchadores, La Estrella and Dorado are left inside the ring to battle it out with their own flips. It felt more like showing off.

Arez finally comes back into the ring to face against Lince. He stalks Dorado in the corner. Arez manages to avoid getting caught by Dorado by sending a hook kick to Lince’s face.

I could have sworn I saw Lince’s teeth pop out at some point. Ha! Ha! Did anyone else see that?

Arez had Lince after he powerbombs him on the mat but the way Myron got back in this match is so weird… He came in and shoved Arez’ head over, which looked like typical high school bullying to me. It looked petty. Straight up odd. They do like talking about Reed’s attitude.

Anyway, Myron super kicks Lince prior to going for a cover, yet he’s immediately interrupted by Arez, who pulls his leg from behind.

Now, this is when everything goes to absolute hell. Estrella is on the top rope, so he could plow Myron, only for the champ to roll out of the way in time. Then Arez tries the same by attempting to crash onto Estrella, who also moves over before getting squished. Lince flies off the top rope as well, yet Arez ducks out too. Miss after miss after miss after miss. I can assure you I’ve never seen such a mess… Ha!

Myron leaps in but no one is home to knockout. Sadly for him, Estrella and Lince both take hold of Reed’s body parts for an attempt at a tap out… which is swiftly stopped by Arez.

Arez and Dorado are embroiled in a chest slapping battle.

While the luchadores are spiraling inside the ring, Reed takes that opportunity to sneak back in, jump from the ropes while grabbing onto both mask-wearing wrestlers whiplashing the duo.

After his win, Reed rallied the audience with a “Boom-a-yay” and let’s not forget his cockiness. He wants stronger competitors. I just met the guy and already he gives me the ‘uh’ vibe I might not like. 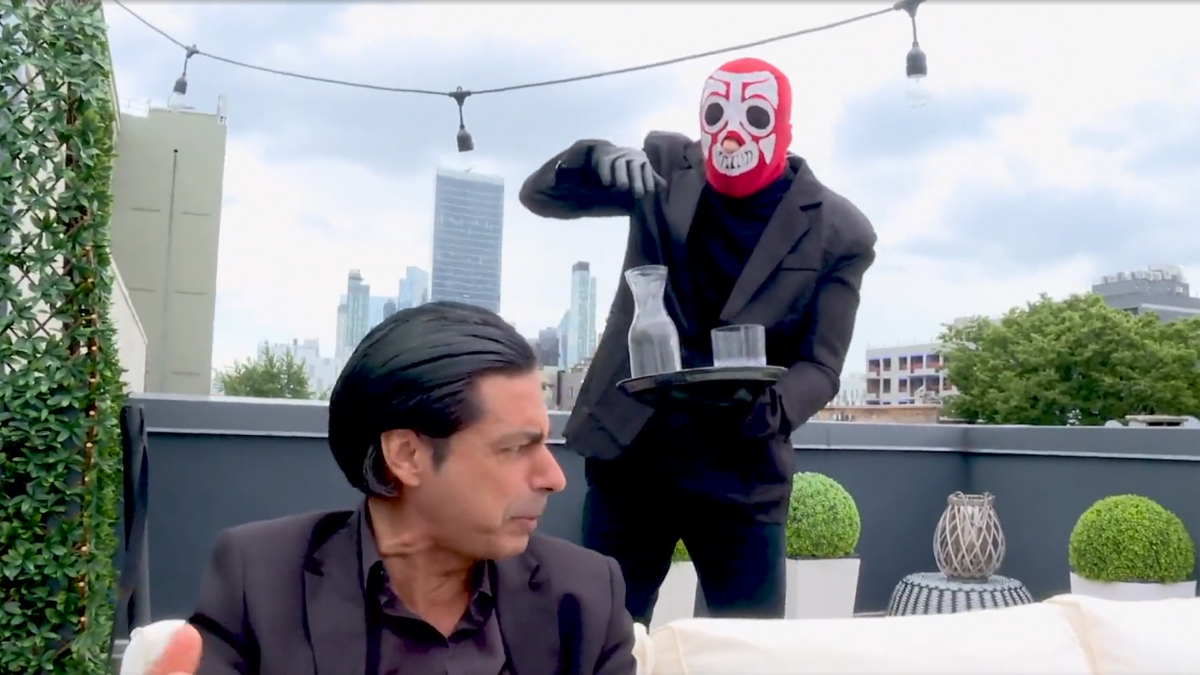 Cesar Duran is on the patio having a chat with Richard Holliday and Alicia Atout. Holliday wants a championship opportunity sooner rather than later. Durna gives him that chance in two weeks mainly because Richard saved Cesar from Alex Hammerstone, who got injured in the scuffle last week.

By the way, the tall man I spoke about at the beginning, the red mask-wearing luchador, is still skulking around like a submissive baby. Durna scared him off with orders involving… chains?

Are we in Fifty Shades right now?

KC has Negro reeling from the start of this match by wrapping his legs around his opponent’s neck, swings him over allowing Mini to crash onto the mat. KC adds more strength to his momentum by leaping out through the second rope to shove Mini into the barricades.

Mini retaliates with a few chops to KC’s chest followed by a harsh leg throw backwards off the top turnbuckles, sending Navarro flying, almost hitting his head against the ring’s opposite buckles.

KC delivers an impressive Tornado DDT to Mini but it wasn’t enough to put him away for a win. Navarro goes and lands his KC The Jesus Piece move to Negro with amazing speed as he covers and ends up with a victory.

There is an update on Alex Hammerstone’s injury. He has limited movement in his body and MLW is not sure he will be better in time for his title match. He had blood coming out from his mouth and he looked completely winded.

Oh, the only thing I can say about Mance Warner is that I love his accent. The way he says “beautiful” is beautiful. He made a surprise appearance at Battle Riot where he was abruptly ended by Mads Krugger. Oh oh, and he talks a lot about not swearing, yet he does…

Real1 reacts to his previous match at Battle Riot. He lost to Jacob Fatu and he took it badly. Even though he cheated when the referee was unconscious. He had too much to say about getting rid of Fatu by discombobulating him as well as taking some cheap shots against Fatu’s Samoan family. All of them. He even brought Jason Momoa into the conversation. Real1 truly is an unbolted hazard. His way of speaking? Street talking isn’t for him.

Scarlett, as in Karrion Kross’ Scarlett, is making her debut in MLW. If you’ve read any my Smackdown recaps I’ve mentioned her many times. Whatever darkness she had on WWE is gone once she entered Major League. It got siphoned hard.

Before the bell could ring, Scarlett gives a cheap kick to Carreras because she looked at her wrong. Ha! Don’t make me laugh. Damn.

Once the match is underway Scarlett gets drop kicked by Carreras, momentarily giving Carreras the upper hand. Scarlett comes back by slamming Clara against the turnbuckle then lands a running hip attack to Clara’s face. This is followed by a DDT to Clara in the middle of the ring.

Bordeaux performs a Scarlett Letter for a seductive looking victory. 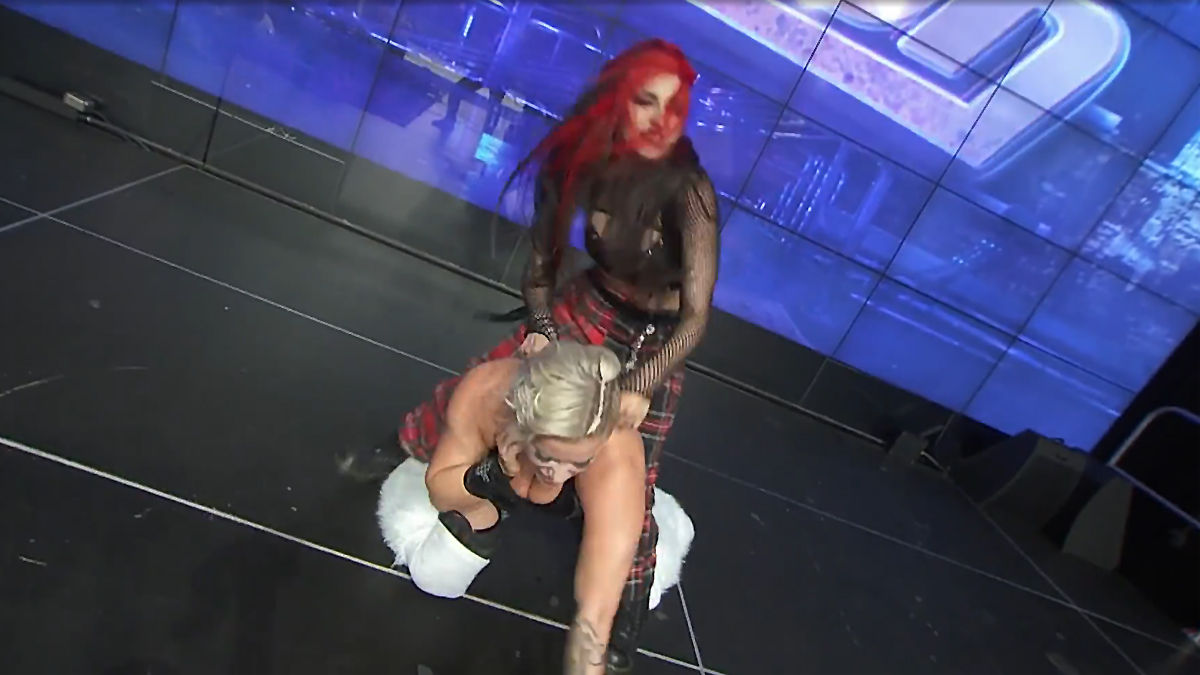 Taya Valkryie, the inaugural MLW Women’s Featherweight Champion, shows how happy she is that Scarlett has made her debut because the women’s division needs it. A championship match could also be a possibility in the future between these two ladies but not before Brittany Blake has her shot with Valkryie first. Blake attacks Taya from behind and demands a title match.

Alex Kane likes to talk big, but next week he has to put his title on the line against Davey Richards, a man he used to look up to before Davey quit. Wow. There too many Richards tonight. 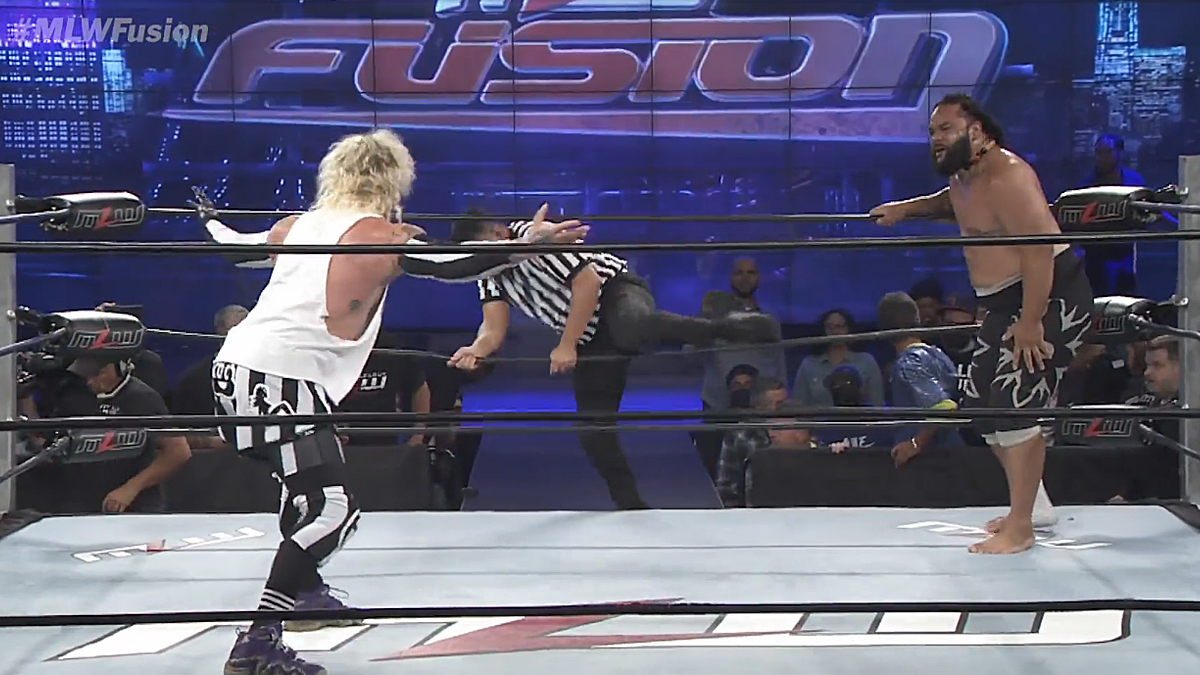 Real1 dares Fatu to come at him. Courtesy: MLW.

The first thing I thought when I saw Real1’s name was “The hell…?” What kind of stage name is that? Maybe I’m the one who doesn’t understand but I can’t be the singular one who questions his label. Honestly…

If anyone is the real one it’s Fatu for throwing Real1… ha, out the ring at Battle Riot.

This matchup hasn’t officially started but Real1 attacks Fatu from behind before he could finish his entrance. Real1 mocks a hurt Fatu demanding to still fight if he isn’t “soft”.  Jacob, given how proud he is, he insists on fighting Real1 even though his leg isn’t 100% due to the attack.

Real1 takes advantage by attempting to plop down on Fatu from the top rope only to be met with a drop kick from Jacob in mid-air.

I didn’t think that what came after was going to happen, yet it did. Real1, after Jacob painfully managed to get back to his feet, kicks Fatu in the balls resulting in him being disqualified.

It didn’t stop there though. Real1 removes the referee out of the equation by also kicking him in the crotch before going after Fatu to damage him some more. Jacob barely had enough power, but what he had left, he uses it to splash Real1 from the top rope, unfortunately, Real1 scurries off. Aren’t we shocked…