AEW Dynamite: A bloodied Bryan Danielson takes 2 out of 3 from Sammy Guevara 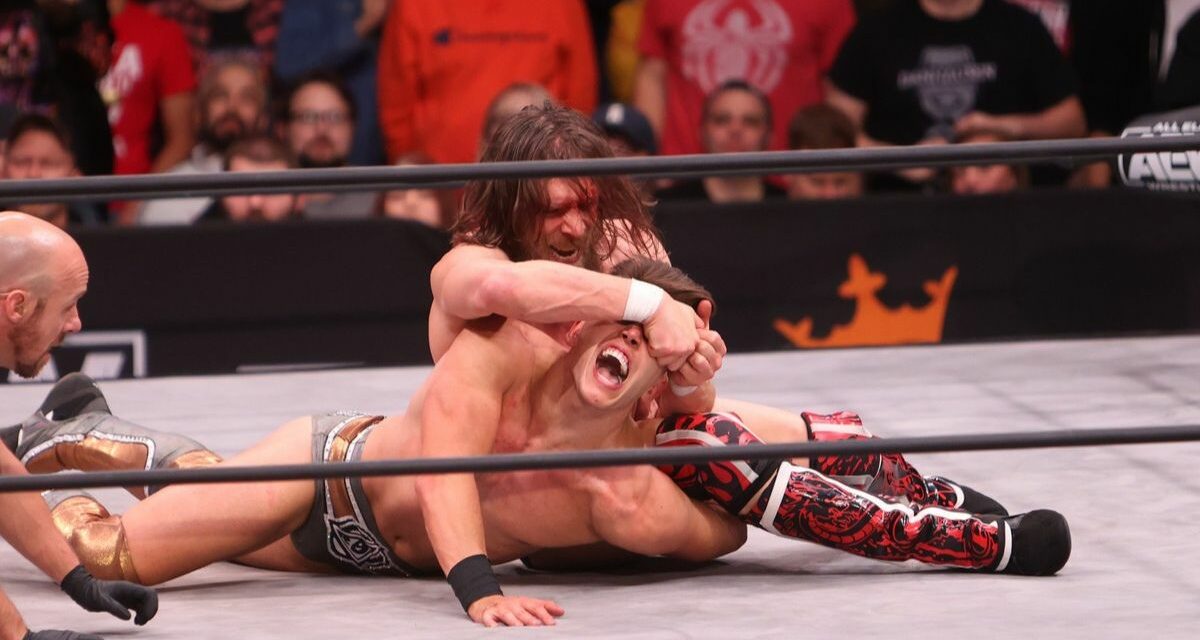 We are ten days out from Full Gear and the card is rounding out nicely. Tonight, though, AEW is starting a World Title Eliminator tournament that will culminate at Full Gear. The winner gets a match against the AEW champion at Winter is Coming. Let’s get to the show.

The Acclaimed and FTR vs. The Gunns w/Stokely Hathaway and W. Morrisey and Swerve in Our Glory – Eight Man Tag Team Match

Before the match, Billy Gunn sprints into the ring and jumps Swerve Strickland. Gunn is ordered to the back. The Gunns take turns working over Dax Harwood, as the commentary team talk of all the traveling FTR has done and how they have to be jet lagged. An atomic drop sends Austin in to the wrong corner and he takes a beating. Tags are made; Swerve beats down Cash Wheeler in the corner. Cash hits a tilt-a-whirl back breaker and tags in Max Caster. All four faces rains down punches in each corner to their opponents and then celebrate with a scissor party.

After the commercial break, during which Morrisey got involved behind the refs back, Dax avoids Colten in the corner to tag in Bowens. He takes out Colten and lays a beat down on Swerve. The Gunns hit the Big Rig on Bowens, but Caster is able to make the save. All eight men are in the ring and the brawl starts. Lee counters a hurricanrana from Bowens and power bombs him into Max. Strickland goes up top, taking out almost everyone on the floor with a tornilla. Dax catches Austin on the top turnbuckle and takes him to the floor with a superplex onto everyone. All eight men are down on the floor. Dax ducks a punch form Austin and locks in the Sharp Shooter. Colten breaks the hold with a hard right hand. Bowens intercepts Colten and Max hits the Mic Drop. FTR hits Colten with the Big Rig, allowing Bowens to make the cover and get the win.

Winners via pinfall: The Acclaimed and FTR 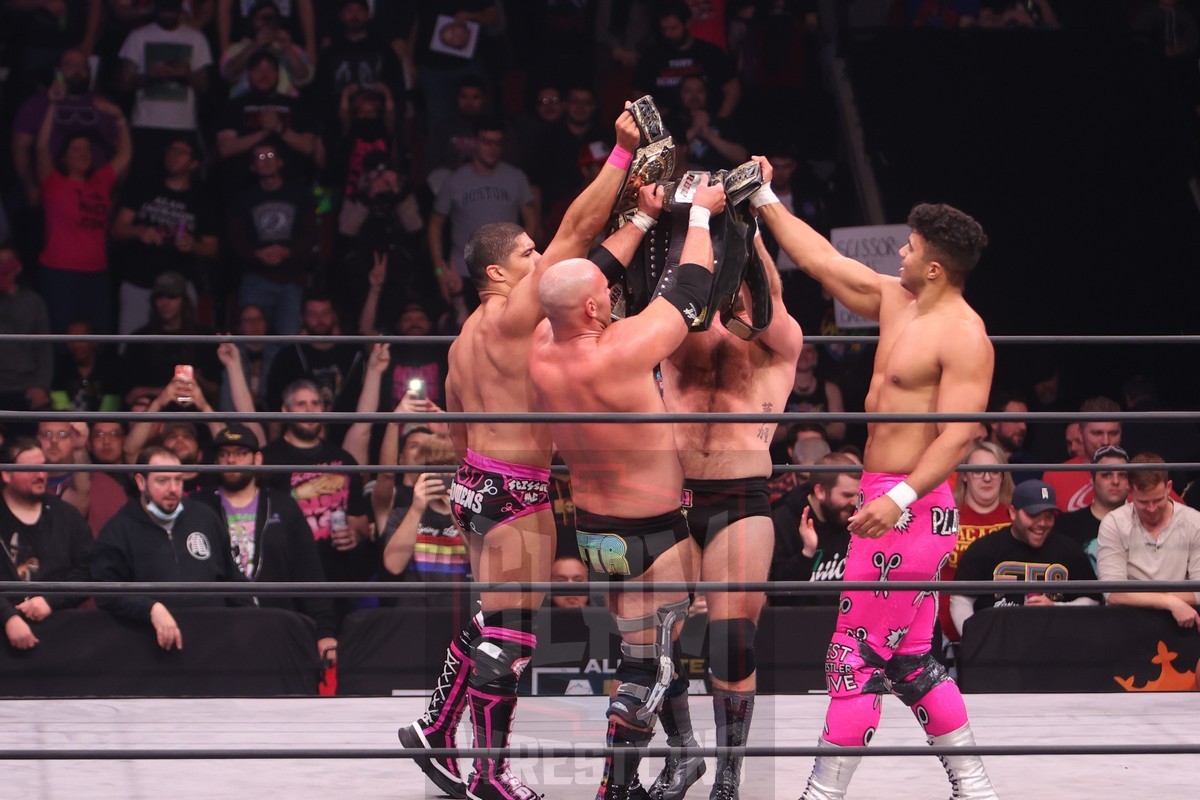 The Acclaimed and FTR at AEW Dynamite at the Agganis Arena in Boston, Mass., on November 9, 2022. Photo by George Tahinos, https://georgetahinos.smugmug.com  MORE PHOTOS IN OUR AEW DYNAMITE BOSTON GALLERY

MJF went on “Pardon my Take” to talk about his match at Full Gear.

Stokely Hathaway isn’t happy that his best friend, MJF, abandon him. Stokely says he will see him in hell.

Kingston takes Page to his knees with a head lock. Page works Eddie into the corner and the two trade shots. Ethan with a flying elbow strike and follows with a shoulder tackle from the apron to the floor. Kingston with a butter fly suplex. Kingston is whipped hard into the turnbuckle and hits the mat. He rolls to the floor, Page hits a suplex on the floor. 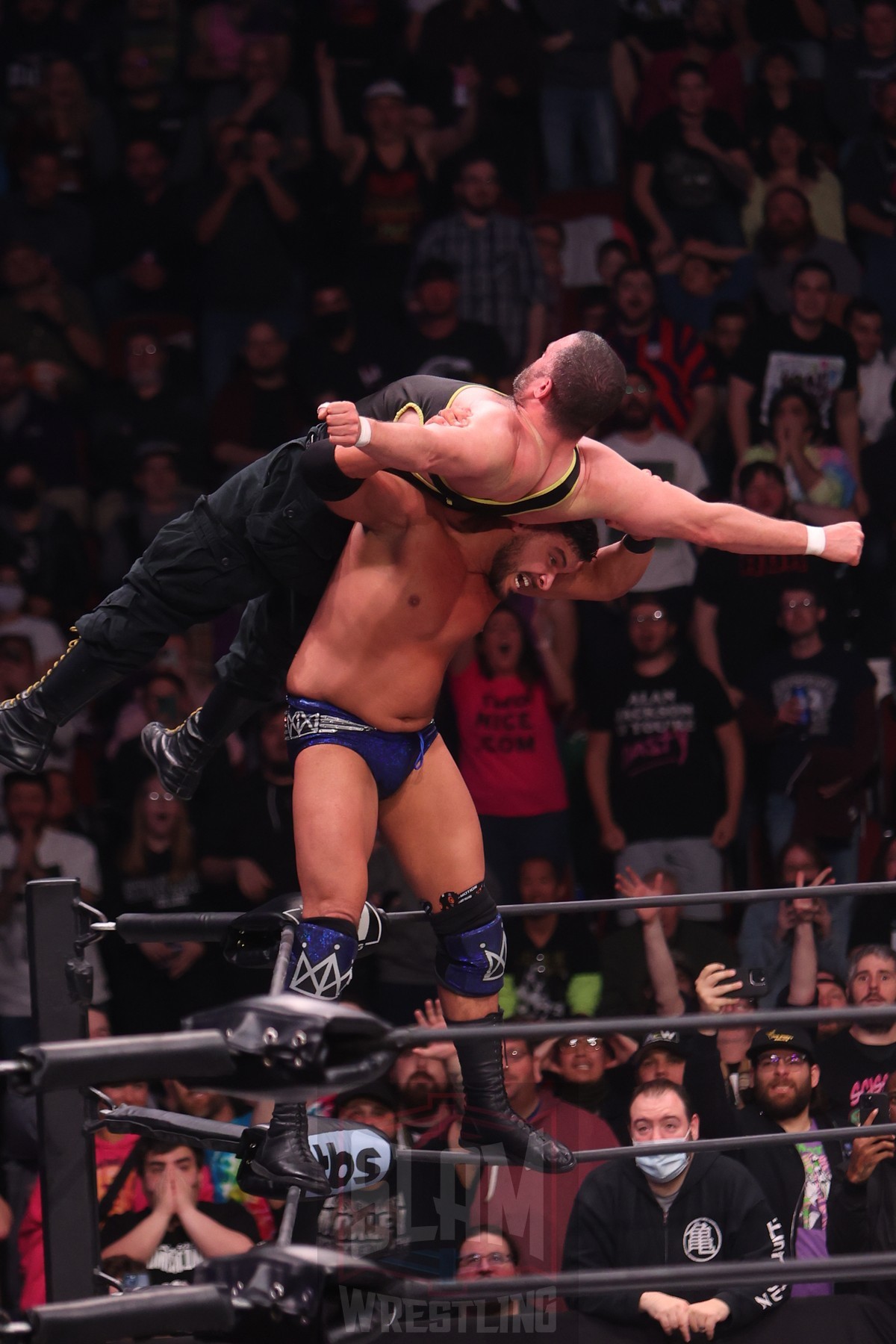 After a commercial break, Kingston makes a cover after a suplex, but Page is able to kick out. The two trade shots and Kingston unloads with chops. He hits a DDT and covers; Page kicks out again. Kingston hits an exploder and locks in the stretch plumb. Page taps, but the ref is distracted by Hathaway. Page connects with a roundhouse kick and goes up top. Kingston meets him on the turnbuckle and bites him on the head. Page escapes and is able to hits the Ego’s Edge from the middle turnbuckle. Page covers and gets the three count.

Jose the Assistant tells Ten from the Dark Order that he will get the first title shot after Rush wins the AEW title, after winning the Eliminator Tournament.

Ari Davari offers Wardlow his bulter in exchange for the TNT Championship. I don’t think he’s going for it.

Wardlow tosses Jeeves the butler out of the ring. The champ head butts Davari, who goes down like a sack of potatoes. Wardlow is ready to conduct and performs the Power Bomb Symphony in four acts. Wardlow covers to get the win. 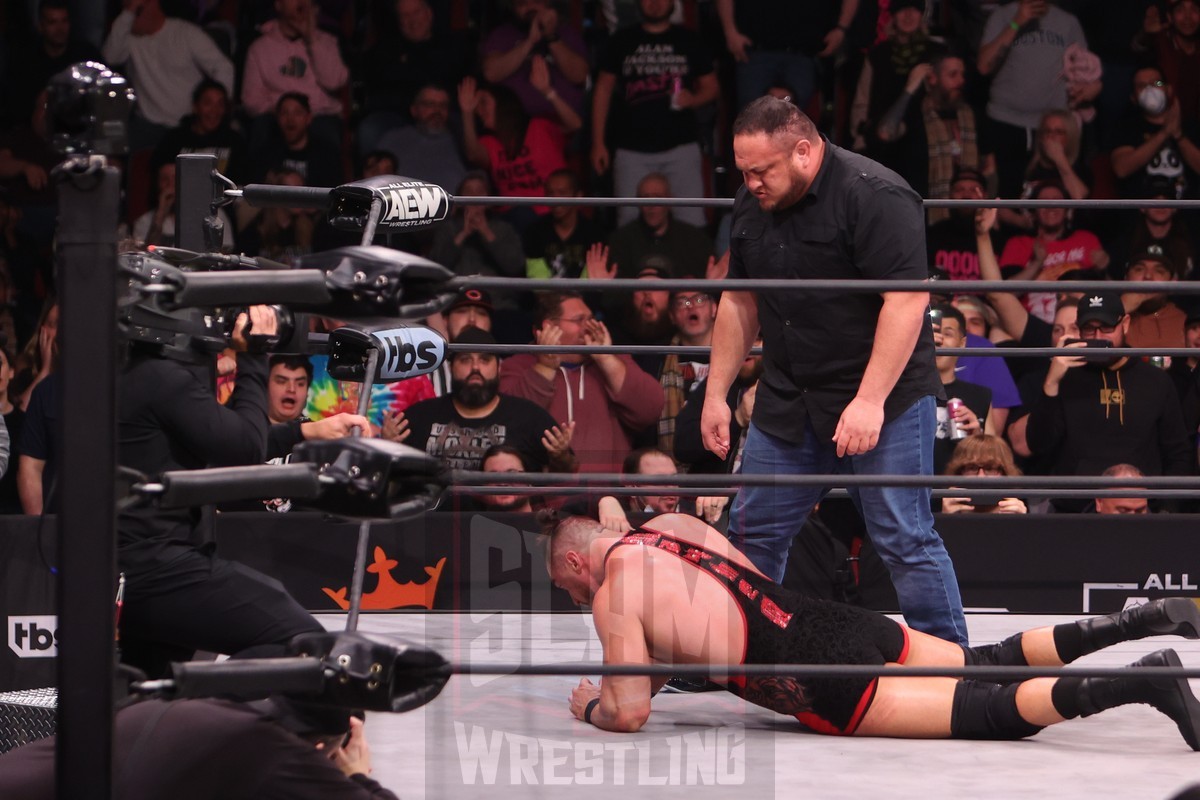 Samoa Joe turns on Wardlow at AEW Dynamite at the Agganis Arena in Boston, Mass., on November 9, 2022. Photo by George Tahinos, https://georgetahinos.smugmug.com   MORE PHOTOS IN OUR AEW DYNAMITE BOSTON GALLERY

After the bell, Wardlow calls out Powerhouse Hobbs. He tells Hobbs that the TNT title is his and he will take all the titles. Hobbs makes his way to the ring, as Samoa Joe blasts Wardlow in the back with the ROH TV title. Joe chokes out Wardlow in the middle of the ring.

Jade Cargill says she will handle Nyla Rose at Rampage this Friday. 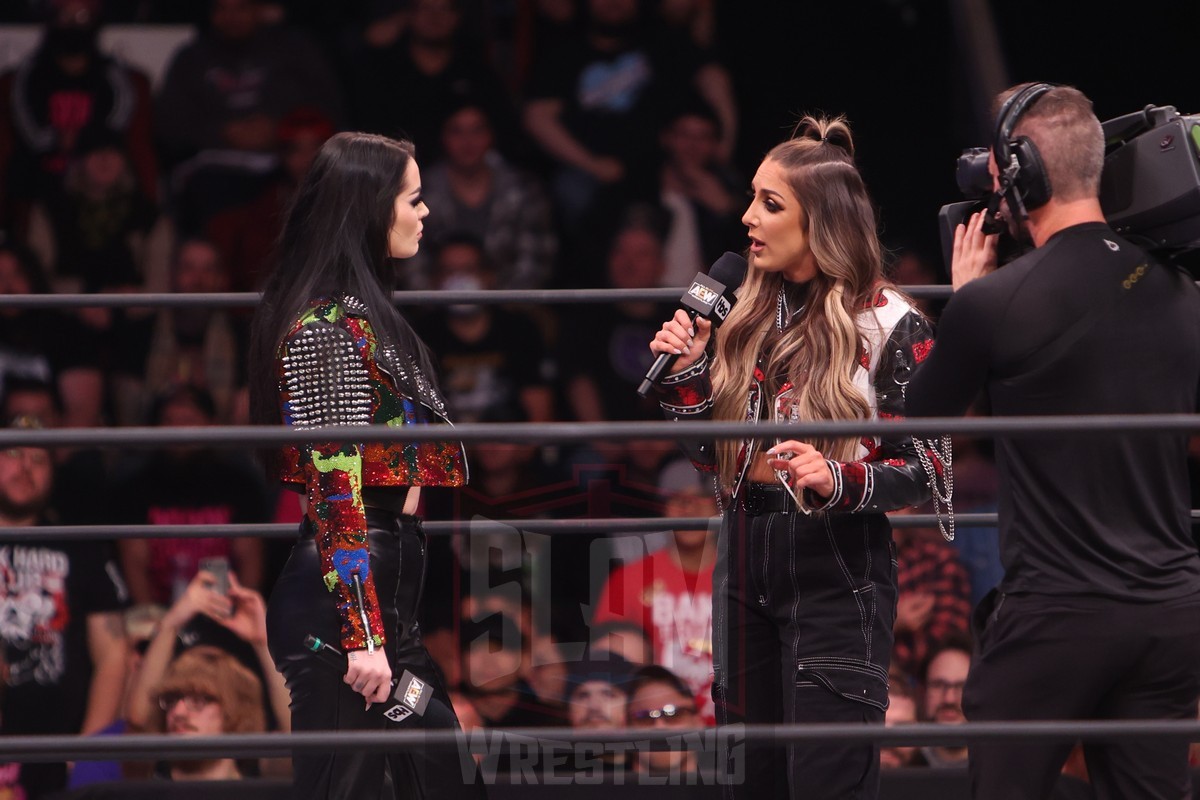 Tony Schiavone is in the ring for the face to face meeting between Dr. Britt Baker, DMD and Saraya. Saraya speaks first, she officially announces that she is cleared to perform in the ring. And that is bad news for Britt. Baker lashes out at the fans for Saraya and tells her that they aren’t clear. Baker claims she built AEW from the ground up. Baker isn’t happy with Saraya calling AEW her house. Baker regrets to inform Saraya that they don’t take walk ins. Saraya takes apart Britt’s record in AEW and the level of talent she has faced. Saraya tells Britt that they have a match at Full Gear.  Baker goes for a cheap shot, but Saraya counters with a DDT, laying her out.

Earlier in the today, we see Sonjay Dutt paying off the Factory for their attack last week. QT Marshall issues a challenge to Orange Cassidy to face Lee Marshall; Orange accepts it before Marshall can finish the sentence. Trent Beretta steps to Jay Lethal, who accepts the challenge.

Lethal attacks Beretta on the ramp before the match. He takes out a knee with a chop blocks and whips him into the security barrier. Lethal rolls him into the ring and the bell rings. Lethal focuses on the knee with a Dragon screw, as Chuck Taylor and Danhausen come to ring side to even odds against Satnam Singh and Dutt.

During the commercial, Lethal locked in a figure four on the floor. After the break, Beretta gets the knees up on Lethal coming off the ropes. Trent hits the half and half.  Lethal counters a DDT, but is shot into the turnbuckle. Beretta with the tornado DDT, but only gets a two count on the pin. Beretta hits an avalanche Half and Half and follows with a knee strike. Dutt leaps to the apron. Danhausen meets him. Dutt is hit in the groin, but Singh hits Danhausen with a head butt. In the ring, Lethal hits the Lethal Injection and covers to get the win.

Tony Schiavone tries to get a word with Dutt. Sanjay tells him to sit down. He delivered Jeff Jarrett last week. Double J walks out on stage. Jarrett has a plan and it starts with calling out Darby Allin and Sting. Jarrett takes offense to a stage manager telling him to wrap things up and chases him off with the guitar. 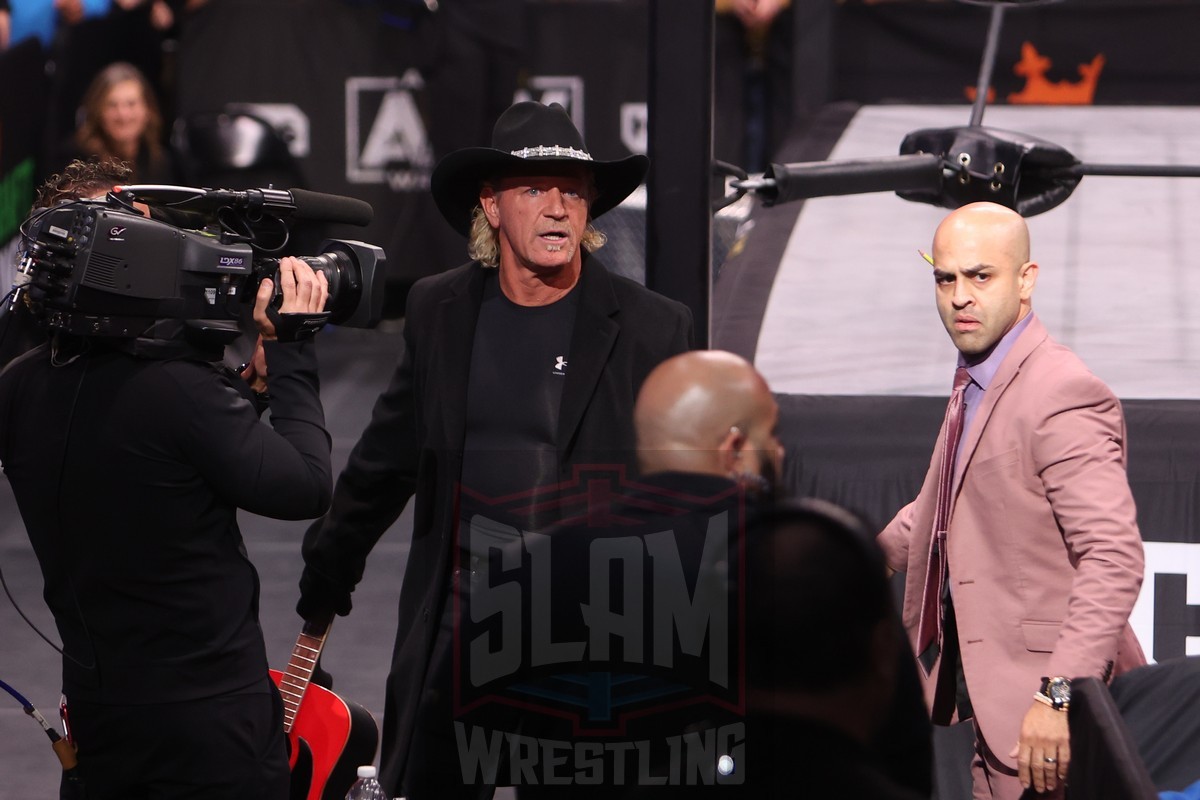 Jeff Jarrett and Sonjay Dutt at AEW Dynamite at the Agganis Arena in Boston, Mass., on November 9, 2022. Photo by George Tahinos, https://georgetahinos.smugmug.com   MORE PHOTOS IN OUR AEW DYNAMITE BOSTON GALLERY

Jungle Boy Jack Perry tells Renee Paquette that Christian doesn’t get to decided when things are over between them. Perry has a challenge for Cage and Luchasaurus on Friday at Rampage.

AEW Heavyweight Champion Jon Moxley and William Regal are in the ring. Mox talks of their history and who reminds them of that. MJF reminds them of a young Moxley. The champ talks about beating MJF the first time they faced off, but this time is different. Mox has met the devil and MJF is not him. 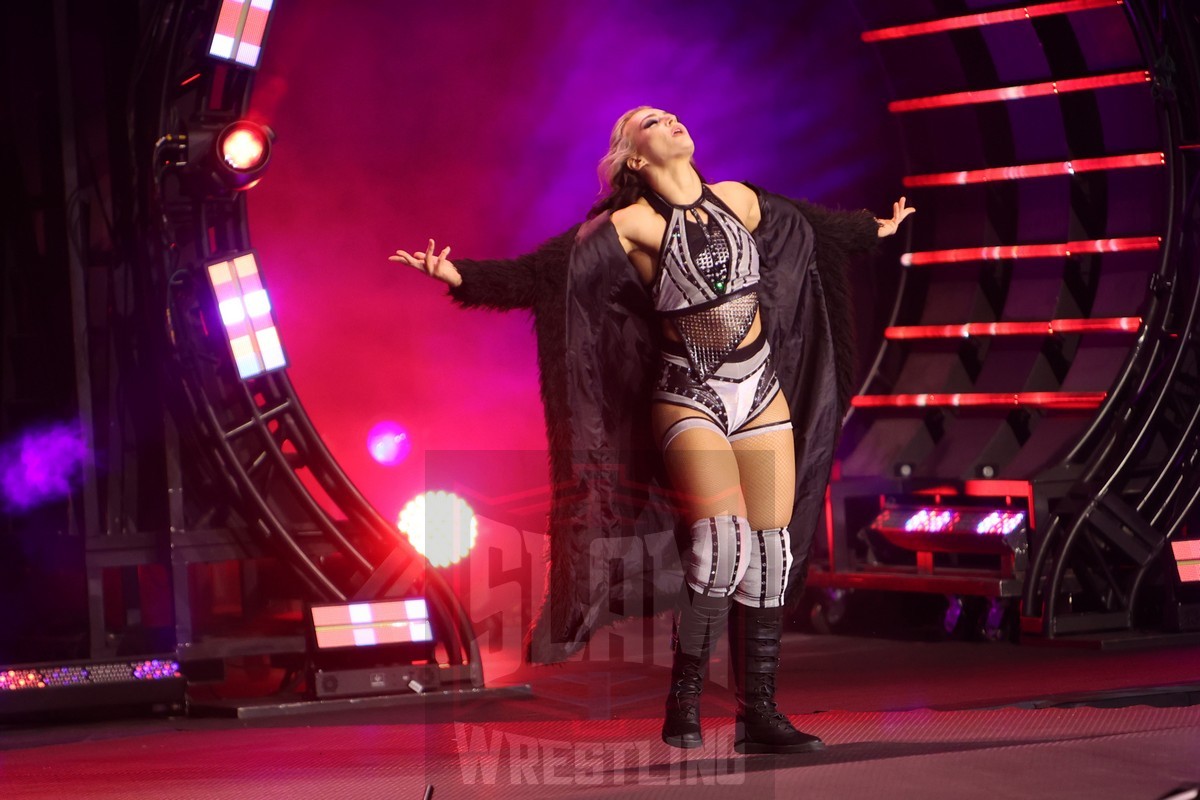 Blue takes advantage of a distracted Hayter, beating her into the ropes. The fight spills to the floor and Blue is able to shove Hayter into the ring post. In the ring, Skye with a rising knee strike. Baker grabs at Skye, allowing Hayter to recover and slam her.

After the commercial break, Blue with a drop kick into the corner. Blue kicks at Rebel and Britt and hits Hayter with a diving cross body. Hayter rolls through on a cross body. Skye hits the Code Red, but only gets a two count. Hayter unloads with forearm strikes. Jamie runs into a thrust kick. Hayter with a high boot and forces Skye into the corner. Hayter hits the Ripcord Lariat and covers to get the win.

After the match, Storm runs Hayter out of the ring to protect Skye.

Lance Archer beats down Ricky Starks backstage, not allowing him to be interviewed.

Danielson kicks Sammy into the corner and then chops at his chest. He runs Guevara corner to corner. Sammy with a leap frog. A spinning drop kick sends Bryan to the floor. Danielson stops the suicide dive and hits a shotgun drop kick in the ring. Danielson stops from flying over the top rope with Tay steps in front of her husband. Bryan moves her aside, only to get clocked in the face with a steel chair, thrown by Sammy. The ref call for the bell. 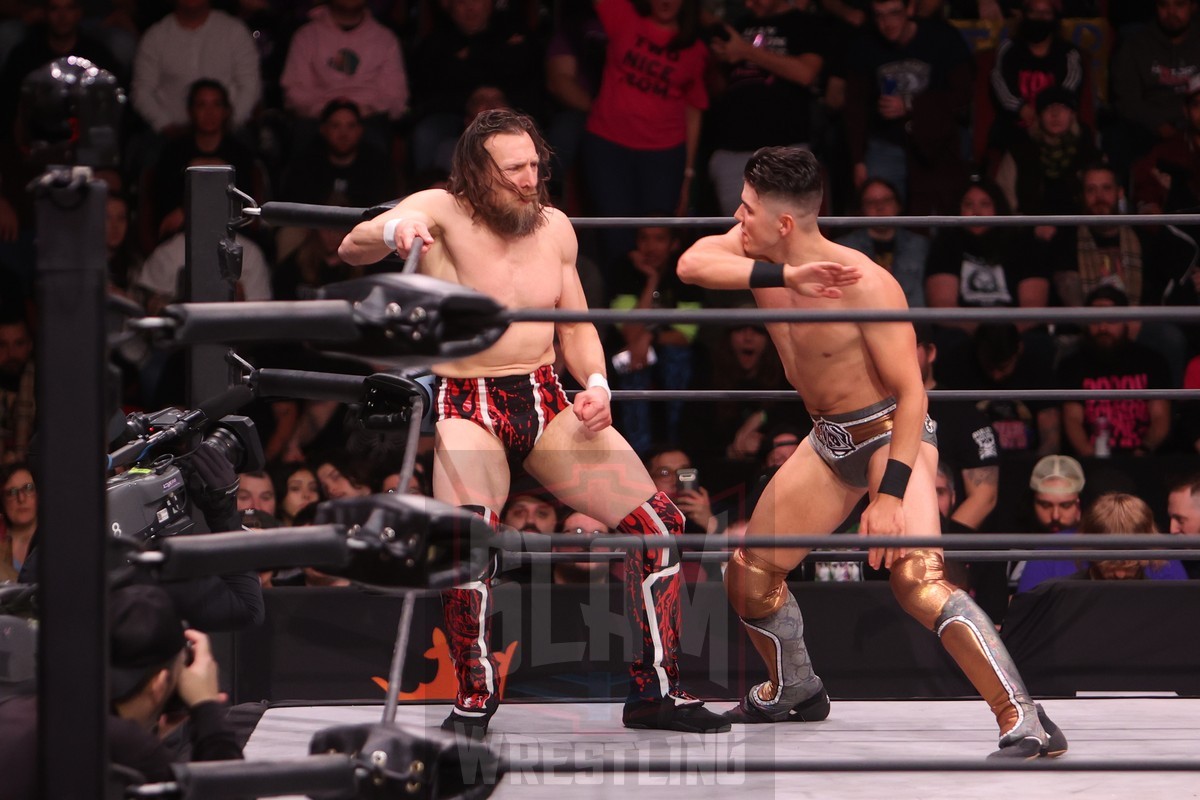 Sammy Guevara w/Tay Melo vs. Bryan Danielson in a 2 out of 3 Falls Match at AEW Dynamite at the Agganis Arena in Boston, Mass., on November 9, 2022. Photo by George Tahinos, https://georgetahinos.smugmug.com   MORE PHOTOS IN OUR AEW DYNAMITE BOSTON GALLERY

Guevara continues to assault Bryan, raking at his eyes.

Bryan is busted open as Guevara works him over. Danielson tries to fight back, but Sammy gets him up and hits the GTH. Guevara covers and gets the pin.

Bryan struggles to get to his feet. The two meet atop the turnbuckle. A head butt from Bryan sends Sammy to the mat. Guevara rolls away from the diving head butt and locks in a cross face. Danielson tries to reverse the hold but Sammy is able to keep it locked in. Danielson is finally able to get to the bottom rope to break the hold. Bryan fights back with chops and head butts. Sammy tries to flip off the turnbuckle, but Bryan meets him with a knee strike.

After the commercial break, Tay Melo is ejected for pulling the official out or the ring. Bryan delivers haymakers and then suplexes Guevara into a tree of woe. Bryan unleashes the kicks and finishes with a drop kick. Danielson takes Sammy up top, but Guevara with leaping knee that sends Bryan to the mat. Guevara connects with a shooting star press to the floor. Sammy looks for the cutter off the ropes, but Bryan catches him. He locks in the Lebell lock, but Sammy is able to get to the ropes to break the hold. Bryan with the kicks, again. Sammy ducks the last kick and hits a rising knee strike. Bryan falls out of the GTH and plants Sammy with a hurricanrana. Bryan connects with the Phsyco Knee, but Sammy hold on and locks in the Lion Tamer. Bryan is able to get to the ropes to break the hold. Danielson hits the Phsyco knee again and looks to stomp away. Sammy counters the hold and hits a flipping DDT. Bryan gets his knees up on the moonsault and applies the Lebell Lock. Bryan adjusts his grip to capture the free arm and Guevara has no choice but to tap out.

Winner of third fall and the match via submission: Bryan Danielson

That’s the show. See you in seven!

Just another solid night of wrestling on the road to Full Gear. There is some work to be done though next week on the final show befoer the PPV.