NWA POWERRR: Heading down the highway for Hard Times 3 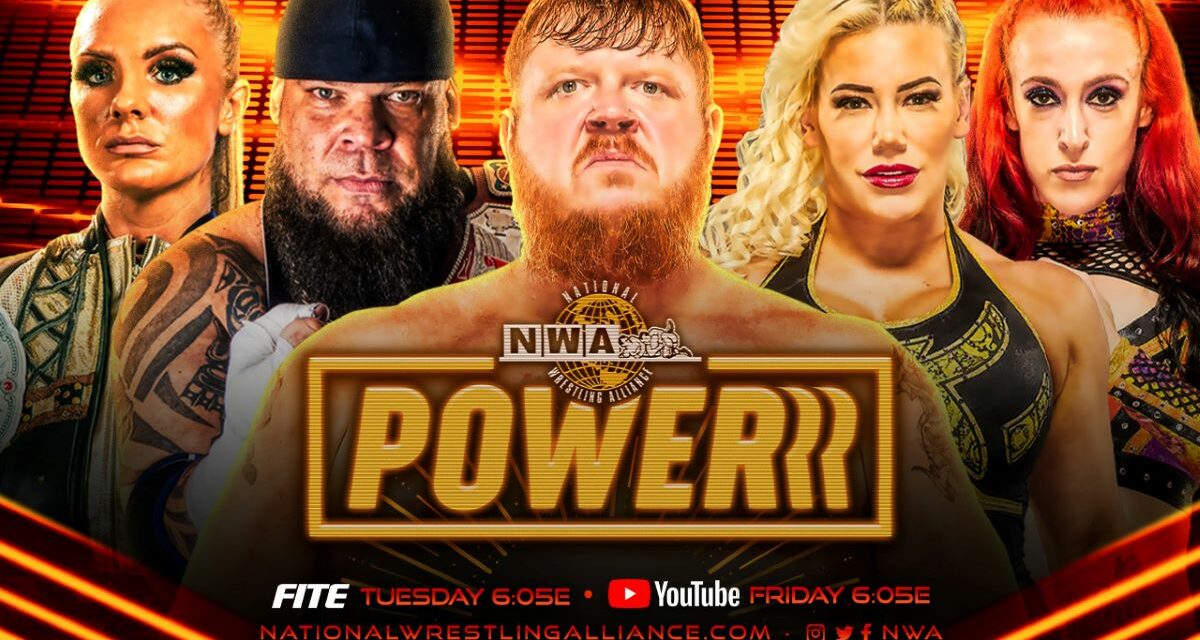 As we head into Hard Times 3, the National Wrestling Alliance has all kinds of matches as all the competitors involved wanted to get more headwind ahead of the pay-per-view.  The main event will have an interesting six-way battle, and Da Pope, Kratos, and Doug Williams go up against Thom Latimer, Tyrus, and the NWA World’s Heavyweight champion Trevor Murdoch.

We come to you for this season finale at the Skyway Studios in Nashville, TN. Joe Galli, Dr. Tom Prichard, and Velvet Sky have the call.  Tim  Storm is still on assignment, be the fans are excited for “Wrestling as it’s meant to be©”, as we head ringside for the First Match of the night… 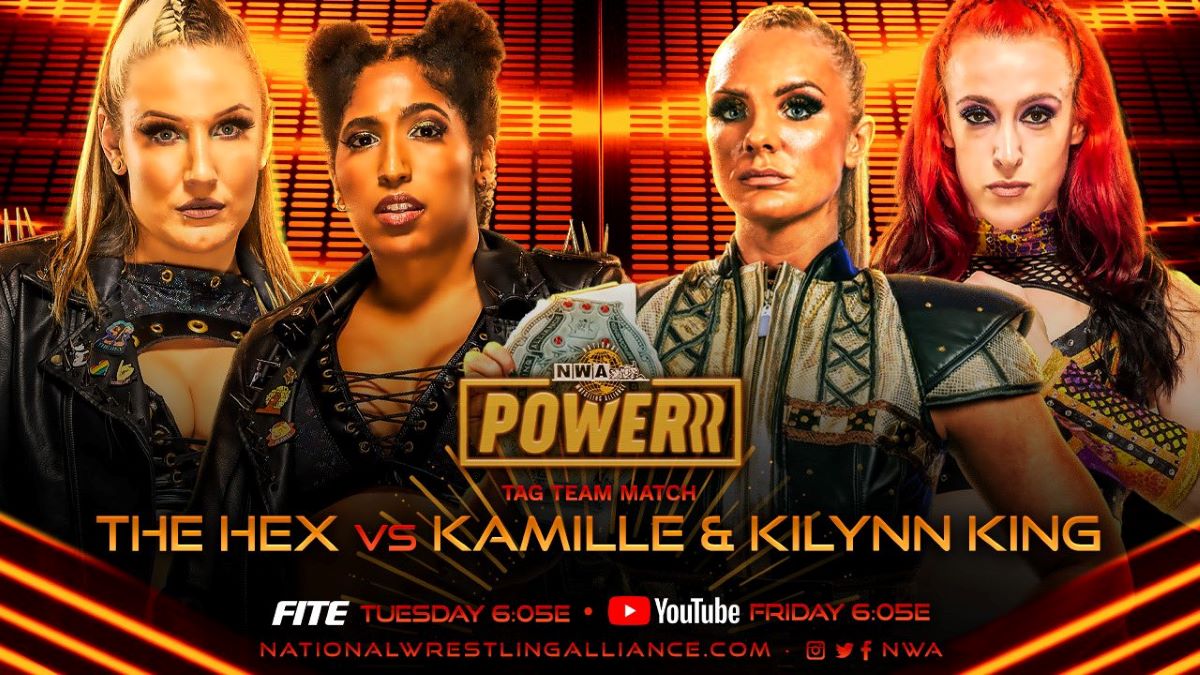 Kamille and KiLynn King vs. The Hex (Allysin Kay and Marti Belle)

Kay and Belle are looking to get back the Women’s tag titles that current holders Pretty Empowered have in their possession.  King and Kay fight to a standstill, but once Belle gets tagged in against the taller King, she promptly knocks her down.  Tag back to kay, and now she faces Kamille who scoops her up in front of Belle and then slams her to the mat for a two count.  Tag back to King and she gets Kay in a steamroller (one of Kamille’s signature moves), and then attempts to follow up with a senton that misses the mark.  Kay throws her into the Hex corner and they isolate King with double-team Hex magic.  Now Belle is in the ring, and King chops at her *hard*.  Belle goes for a sleeper but King turns around and slams her into the corner.  King crawls to her corner, but Kayruns over and pulls off Kamille from the apron before the hot tag, and we return back to The Hex in control, and Kay is beating King soundly. She throws her in the corner and rushes at King, who explodes with a back elbow to a second rope dropkick.  Now King gets to her corner for a tag to Kamille, and she is a Brickhouse en Fuego.  She gets Belle with an Oklahoma Stampede to cover, but Kay breaks up the count.  All four women are throwing the heavy artillery, but Kay finishes with a uranage on the women’s champion.  The Hex nail Kamille with double running knees and then attempt Hex Marks the Spot, but King comes in and removes Belle from the equation. King hits Belle with a ripcord, and Kamille delivers a spear to Kay for the win.

Your Winners via Pinfall:  The Hex

After the match, there are handshakes of respect for all four women, much to the fans’ delight.  Kamille and King are friendly as well, but just for this one night.  The PPV will change that for certain.

May Valentine is backstage with Ricky Morton on his son Kerry Morton getting another chance at Homicide’s NWA Junior Heavyweight title. Ricky states he wants his son to be his own man and do what he does best. He Gives props to Homicide, but notes one mistake is all it takes and he can’t wait for Kerry to show off his skills in the ring.

Now Valentine has with her the number one contender for the NWA National title, Dak Draper.  He says this is a tremendous opportunity for him to face Cyon. Draper goes on to say there may be all sorts of tall tales of his exploits down the road, but beating Cyon for the belt will make him a legend. 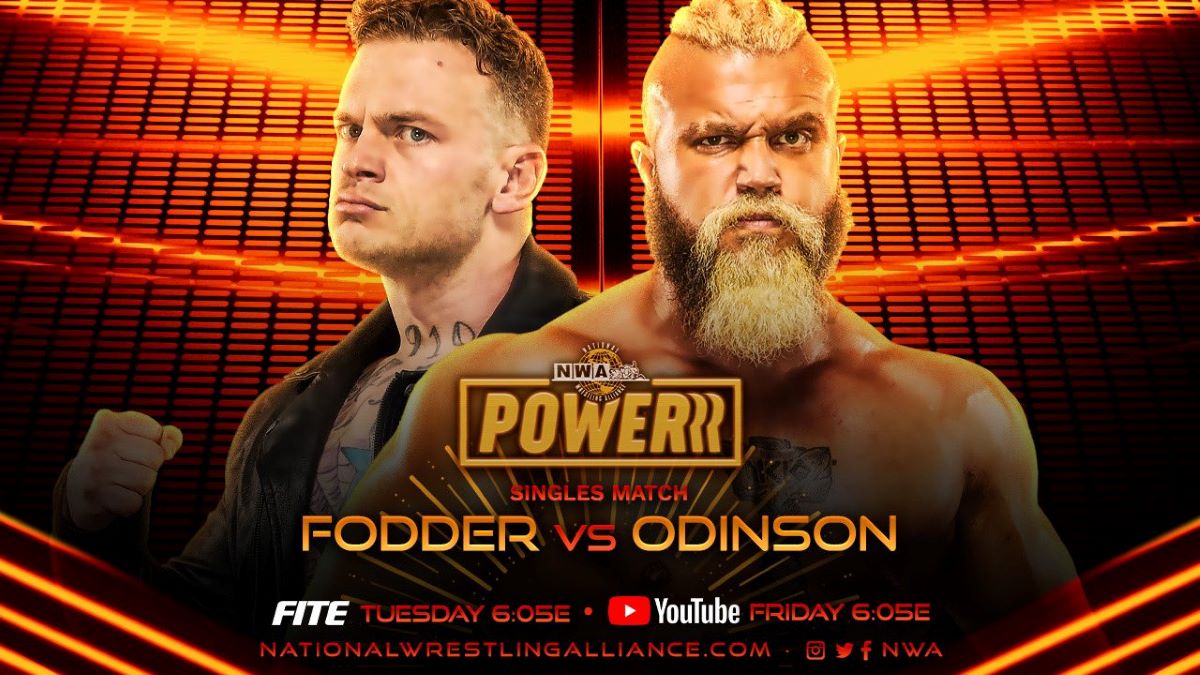 (Author’s Note:  Hey, folks.  It’s your Lucid Luchador breaking down the fourth wall for a sec.  Mind if we chat about the missing Treasure in the room, so to speak?

So here’s the deal:  Odinson was supposed to face Nick Aldis at the PPV, but because of recent actions by both Aldis and the NWA, that ain’t happening.  Odinson spent a good deal of time with Aldis and Flip Gordon building up this feud, and now that he is effectively suspended that leaves Odinson without a match as of this writing, and no blowoff to this feud.  Of all the parties involved, I feel bad for Odinson who’s left hanging as a result.  The NWA has yet to announce who his replacement is, but here’s hoping they can salvage what they can because Odinson deserves that much.)

Oh, yeah, there’s still a match in progress.  Please understand that this requires a Haiku in Review™:

Fodder and brings down the

Thunder with a Pounce.

Your Winner via Pinfall:  Odinson

As Odinson celebrates his victory amidst the boos of the crowd, it looks like the aftermath of the match was cut sooner. Wonder why?

Valentine is now with her main squeeze Aron Stevens and The Question Mack…err, Mark. Valentine asks her babe what’s going on, so I’m letting Stevens speak for himself:

“Stevens:  The following opinions are not necessarily those of the NWA, but they should be!  “Question Mark II,” are you kidding me? Who do you think you are? Whoever you are, you little hidden suck, I want you to listen to me and you listen real good. Right here we have *The* Question Mark. The only Question Mark that’s ever been, and I am the only person that really can answer that question. So it sounds to me like we have a big question mark, and you are nothing but a mark and you are going to be exposed for the fraud, for the liar, and for the person that is the most disrespectful human being I have ever seen! And you know how we gonna do that?  We are going to have The Question Mark beat you from one end of Bourbon Street to the other.

Stevens:  I am not retired, May. I am rewired. I’m a wrestling manager. I haven’t even had my manager’s license laminated yet. And Kratos, I want you to look at me sucker. I would love nothing more than to jump down your throat and stomp your liver, but I ain’t gonna do that.

On, and Question Mack does say something to end the segment:  “Kuh-rah-tayy!”

Now if I can be serious for a moment (apologies to Lance Storm), let’s head back to ringside for… 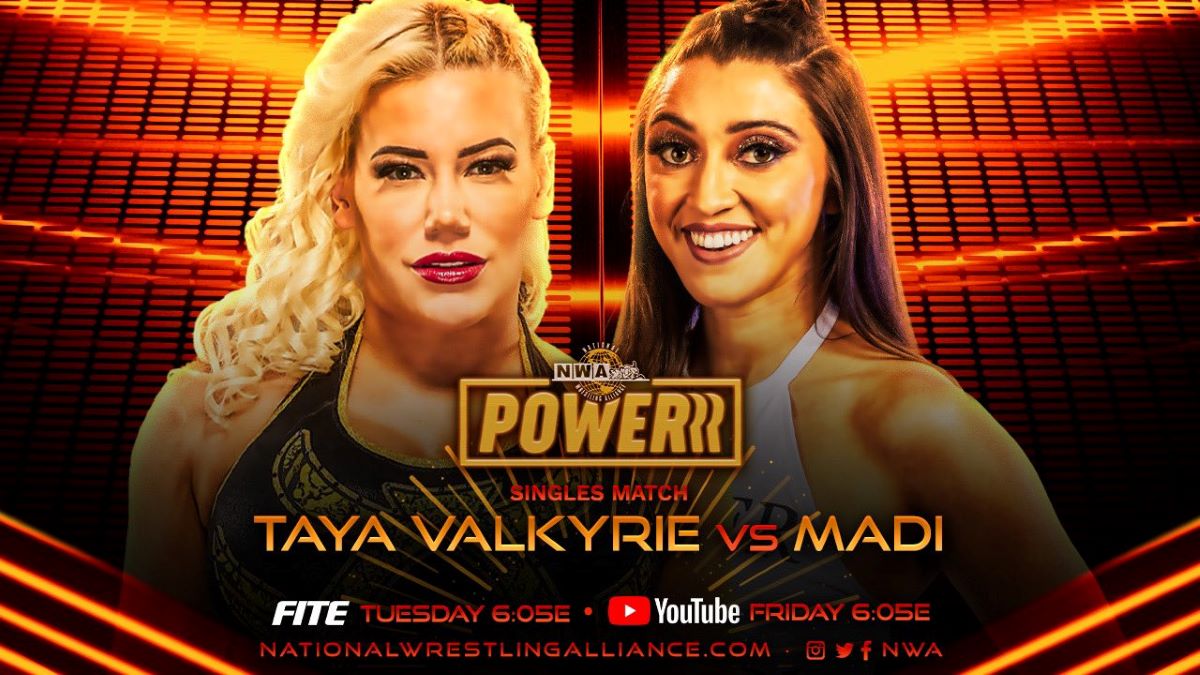 Valkyrie has the strength advantage in this matchup and Madi is the underdog trying to get some momentum ahead of her and Missa Kate’s tag matchup at Hard Times 3.  La Wera Loca picks her apart and outshines her at every turn, and that makes Madi bail the ring and take a breather on the outside.  As Madi tries to get her composure, Valkyrie tries to pull her back in the ring by the hair, and Madi stun guns her on the top ropes, and her shoulder feels the effect.  Now Madi gets back in to take advantage of the situation by targeting the bad arm and shoulder of Valkyrie.  As the fans chant for, “Tie-ya”, Madi drives back to the mat and covers for a two count.  She signals for The Reality Check but Valkyrie has it scouted and she comes back with kicks and then a clothesline. She sends Madi to the ropes and nails a Blue Thunder bomb for a two count.  Madi attempts her finisher again, but Valkyrie escapes and then hits a massive curb stomp for another two count.  She tries her Road to Valhalla finisher, but Madi escapes and gets a high DDT to knock out La Wera Loca silly.  She covers for a near fall, and Madi is beside herself.  She picker her up again, but Valkyrie chops her and then kicks Madi in the midsection and now she delivers the Road to Valhalla to get the pin for the win.

Your Winner via Pinfall:  Taya Valkyrie

Valentine is now with Captain YUMA, who has a different look with a shaved head and space suit. Since traveling the galaxy, he explains to Valentines, he won’t wrestle at the PPV, but he will be there as a doctor.

YUMA confirms Cyon was injured recently with a partial tear of his ACL, but in his medical opinion he will be ready for “Hard Times Trois.”

I don’t know where this is going, but I’ll play along.

Valentine interviewed Hawx Aerie from last week after they secured another chance at the NWA Tag Team titles. Luke feels pretty good winning the spot.  He addresses La Rebelion and lets them know they’re walking into Louisiana with the titles but not with the people. PJ states it more emphatically and even busts out some Spanish(!) that they’re coming to their house.  This is definitely a huge match for both father and son, and this will be one of the highlights of that night.

So now we head to The Main Event, which is a… 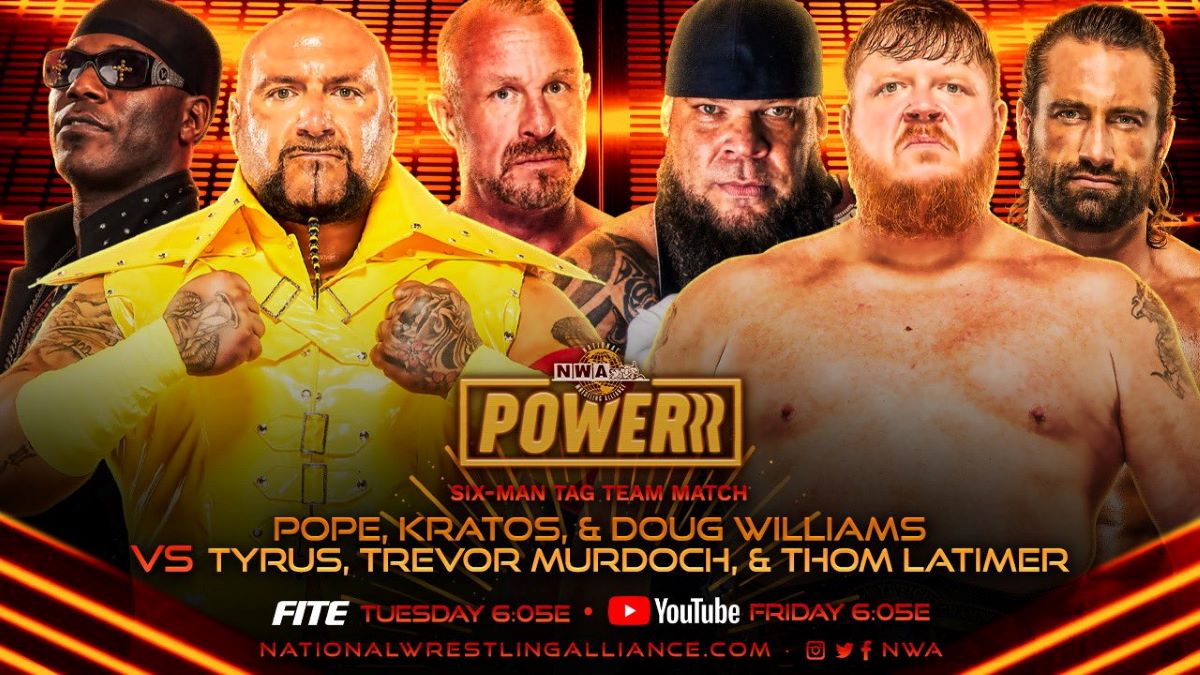 “There’s a lotta beef in the ring,” says Dr. Prichard, and boy he ain’t kidding.  Amidst all this, Galli points out that neither Chelsea Green not Matt Cardona were involved in any of the matches tonight, which makes them fresh when facing off against their respective opponents at the PPV.

Latimer and Pope start the match with a handshake, and they’re off to the races.  There’s a nice stand and switch between the two men, but Pope uses his speed to get the better of the King of All Evil.  Latimer pushes Pope into his corner, and Tyrus tags in and overpowers his rival.  As he tosses Pope to his corner, Kratos tags himself in, and Tyrus stares at the Most Feared…and then tags in Murdoch.  Now he and Kratos throw the heavy lumber, but it’s the champ who answers back with a back elbow.  Kratos tags in Williams and The Ambassador goes after Murdoch with technical wizardry.  He gets him down on the mat with a crossface, but Murdoch fights out and nails a clothesline to Williams.  Tag back to Latimer and he stomps his midsection and lands an elbow drop for a two count.  Now Tyrus gets back in the ring, and it is just pure brute strength from the Man-ster to Williams.  All three men keep Williams isolated in their corner, making him an Ambassador in Peril.

Murdoch and Latimer keep up the offense with a double suplex to cover for a two count.  Back to Latimer who sends Williams to the corner, but he nails him with a second rope European Uppercut to create some space.  Williams crawls to his corner and gets the hot tag to Kratos, and he is a Most Feared Man en Fuego cleaning house.  He powerslams Latimer and then deadlifts him into a suplex.  He floats to a cover, and Stevens runs out and pulls the ref out of the ring, and clocks him with the loaded glove.  From there it becomes pandemonium in and out of the ring.  Far as I’m concerned, this is a…

As Kratos gives chase to Stevens to the back of the studio, out comes Cardona and his cronies for a sneak attack.  Cardona gets a steel chair from the audience and enters the ring, as Murdoch and Tyrus face off against the Cardona members.  They finally get them out of the ring and then catch Cardona red-handed.  As Murdoch and Tyrus face down Cardona, he runs like the proverbial scalded dog to his stablemates as the tune of Beguiled plays while the show goes to the credits. 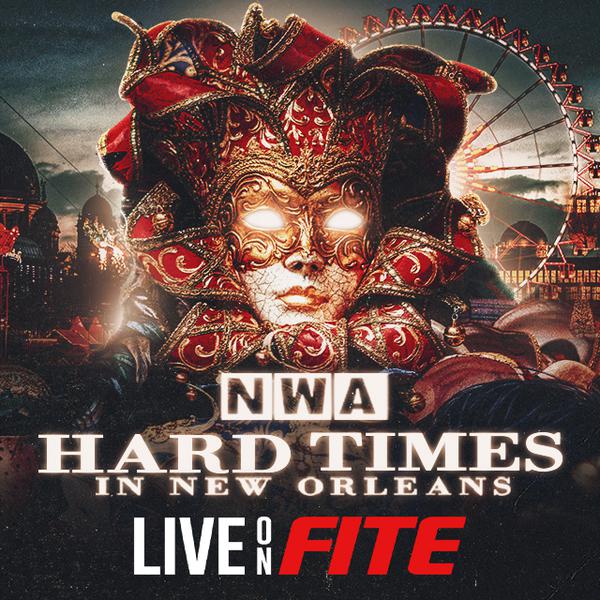 Not a bad way to close out this season of NWA POWERRR, as we turn to Louisiana this weekend.  Both the women’s tag match and the Schmozz-a-Rama at the end were the highlights of the show and emphasized what’s at stake for the two matches on the card.

There’s still a lot more to cover and prepare for in anticipation of the PPV.  Until then, see ya this Saturday!