Money in the Bank mayhem spices up a mundane Raw 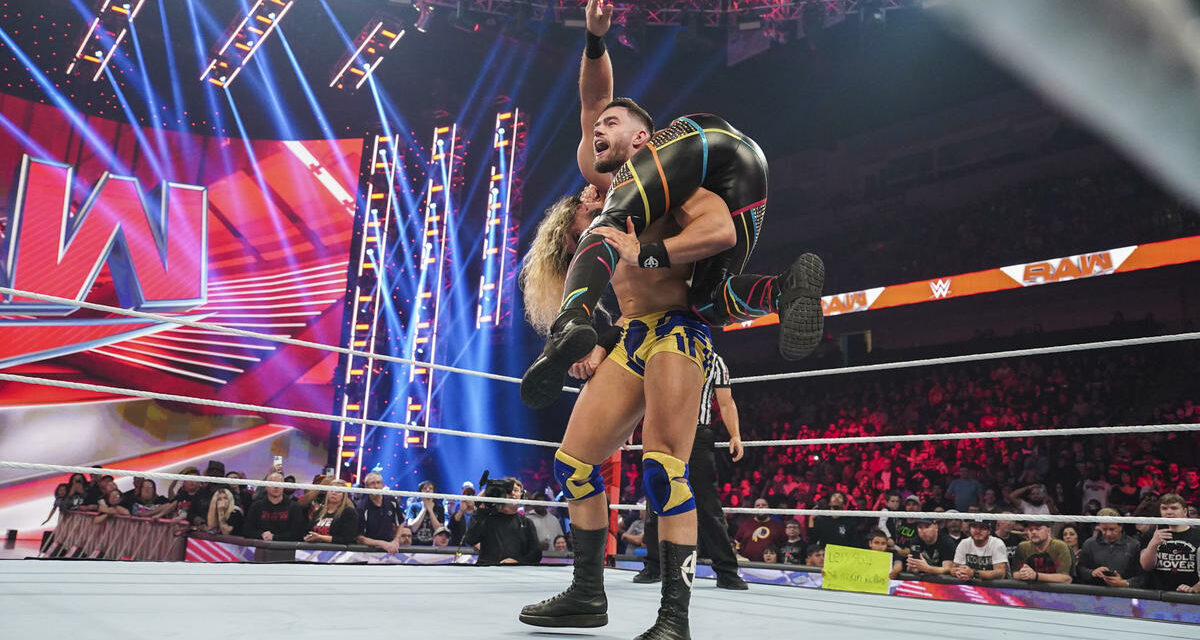 Fresh on the heels of this past weekend’s Crown Jewel, there are just three weeks to go until Survivor Series. Even before that arrives, however, there’s an intriguing match to promote for this week’s SmackDown. To that end, out come most of The Bloodline, Jimmy and Jey Uso along with Solo Sikoa, to tout their victory over The Brawling Brutes in Saudi Arabia before looking ahead to The New Day on SmackDown.

If The Usos beat The New Day, then the brothers will become the longest reigning WWE tag champs ever. It’s kind of nice that they face The New Day to do it, but if Triple H and Stephanie McMahon want to show that this really is the new WWE under their leadership, then they should repair the bridge and bring Demolition into this story.

We don’t get Ax and Smash right now, but we do get Xavier Woods and Kofi Kingston. Woods (who is still the King, right?) does most of the talking, claiming that the Usos got to where they are based on their family, while Jey responds that their lineage only ever added to the pressure they faced to succeed. Oh hey, Jimmy just mentioned Woods’ crown.

The crowd in Wilkes-Barre, PA, is not too into this as Woods and Kingston detail their struggles to overcome their original gimmick of positivity to become something unique and over with the fans. Well, if the fans were hoping for something else, they sure get it.

Matt Riddle inserts himself into the conversation, gets some of them to play his bongos, and suggests a six-man tag match to open the show. Not the smoothest transition, but here we go. 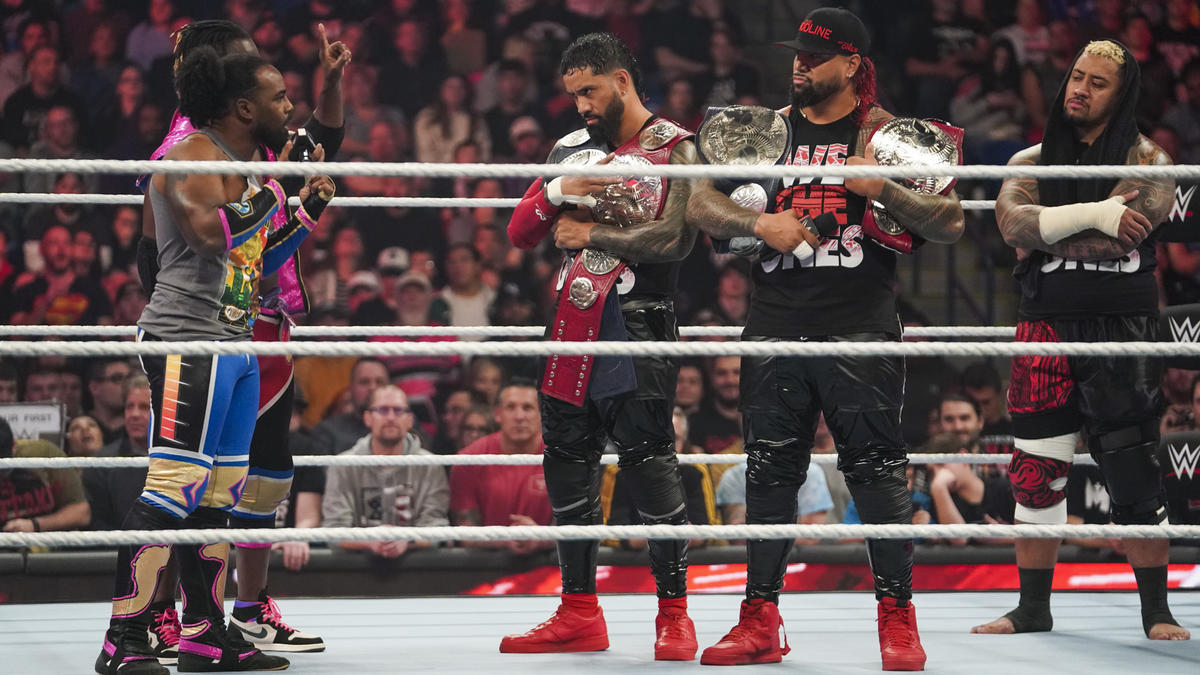 The New Day and The Bloodline both try to gatekeep how hard it is to become stars. Photo: WWE

Riddle and Jimmy start things off with Matt deadlifting Jimmy over his head, setting the long-haired Uso up for a Unicorn Stampede. Jey tags in and tries to get rolling, but Kingston drops him with a leaping back elbow before Woods enters to twist Jey up, focusing on his taped right arm.

Riddle is in next, sending Jey to the floor and setting up for a Floating Bro from the apron until Sikoa knocks him all the way down the floor going into a break. Returning to the match, Sikoa is in against Riddle with a series of headbutts and standing leg drop before bringing Jey back in to hit a superkick and talk some trash.

Riddle makes a hot tag to Woods, who then tags in Kingston and they deliver a series of kicks and falling punches on Sikoa. Kingston hits a Boom Drop on Solo, but Sikoa catches him in mid-Trouble in Paradise, launching him all the way out to the commentator’s table before another break.

Back in, the crowd is still awfully quiet as Sikoa drops another leg on Kingston, then Jimmy tags in and encourages the fans to be quiet — which is kind of funny. A few tags later, Riddle is in against Jimmy (who’s legal) and Jey (who’s not), delivering knees and suplexes to both brothers (and a shot for Sikoa as well). Riddle misses a Floating Bro and meets a superkick instead, but everything breaks down again with all six fighting until Riddle lands a hangman’s DDT and RKO on Jimmy — but Jimmy isn’t legal. Sikoa, who is, grabs Riddle for a Spinning Solo.

JBL struts into the ring and insults the Phillies for losing to the Astros before introducing Corbin, who begins the match with punches and a clothesline that makes JBL proud. After a fight on the floor, Alexander leaps in through the ropes and right into an End of Days for the easy win.

It’s time for Seth Rollins’ open challenge for his United States Championship and, unexpectedly, we hear The Judgment Day’s theme. All four members approach the ring but only Balor enters. He has a mic and says that a couple of years ago, Rollins cost him gold, referring, presumably, to the injury that Balor sustained taking a buckle bomb from Rollins for the inaugural Universal Championship.

Before Rollins can respond, out comes The O.C., standing off against The Judgment Day in the ring while Rollins makes a strategic exit. Styles says that The O.C.’s business with The Judgment Day is far from over, and they’ve found someone to help them with their “Rhea Ripley” problem. Actually, Styles says, she found them.

Out on the floor, Mia Yim attacks Ripley and a big brawl begins all over the place, culminating with a Styles Clash on Dominik.

After a break, Cathy Kelley catches up with Rollins, who promises an open challenge later in the night.

Otis throws his weight around early, shoving Elias around with ease. Elias almost hoists Otis up for a body slam but falls back under his weight. Elias changes gears and starts dodging, letting Otis run himself into a corner post. Even still, a cradle slam by Otis gets a pin and a decisive victory.

Backstage again, Byron Saxton asks The Judgment Day if they’re worried about Mia Yim, to which they all reply of course not. Ripley, especially, says it doesn’t matter at all. Notably, Ripley and Bianca Belair cross paths further down the hallway, hinting at something to come.

Belair was on her way to the ring, arriving there now with Alexa Bliss and Asuka. They call out Damage Control, who immediately oblige and they waste no time getting into a brawl — including another attack by Nikki Cross who seems to be aligned with Bayley, Dakota Kai, and IYO SKY. In the end, Belair says this will end at War Games, and Bayley concurs. Not sure if that means a War Games match, but I’m sure we’ll learn that later.

Benjamin lands a hard right hand, but Theory responds with a stellar standing dropkick. More punches are traded back and forth, then a clothesline by Theory, then Benjamin responds with a German suplex. A rake of the eyes by Theory sets up an A-Town Down and the quick victory.

The Miz VS. Johnny Gargano

The Miz is on the mic before the match, claiming that the truth of his story will eventually come out — thanks to a meeting he had with a big-time Hollwood producer. In the meantime he’s planning a defamation suit against Gargano. By the way, the crowd is still so dead that they can barely manage a “Tiny Balls” chant.

Out comes Gargano, who reveals that the Hollywood producer that Miz is talking about was actually a private investigator hired by Johnny. He plays a clip on the big screen in which Miz admits to the investigator that he had been paying Dexter Lumis to help build up his own profile. 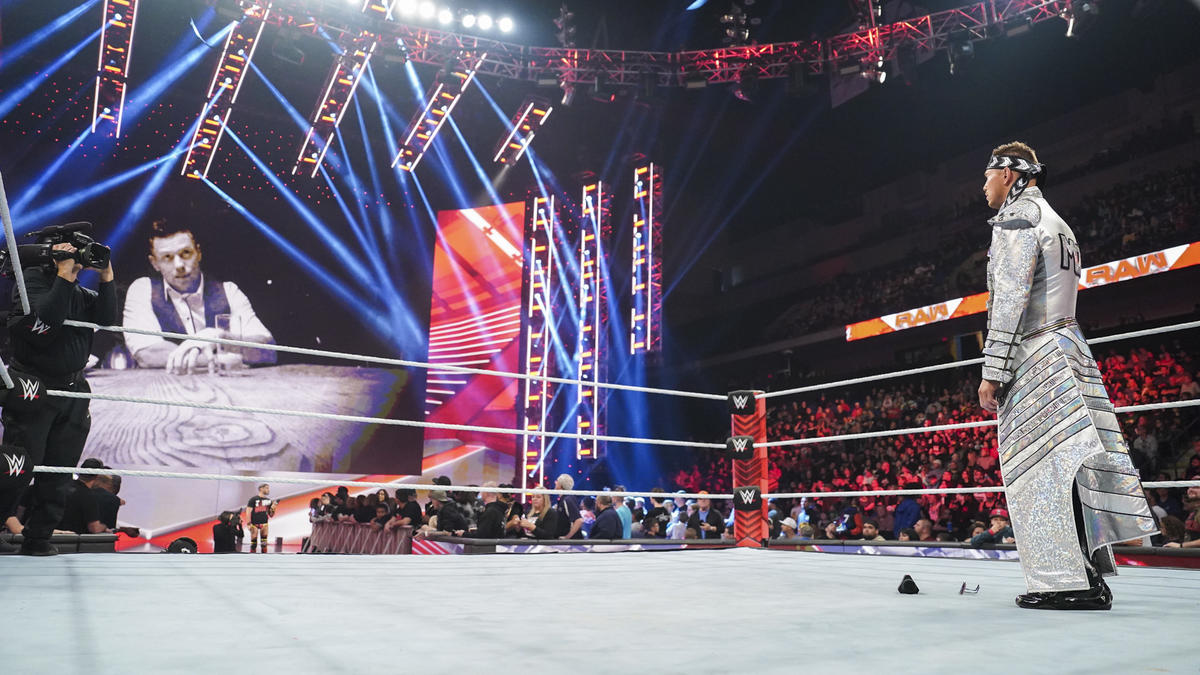 The Miz looks on as Gargano exposes his plot. Photo: WWE

Miz is left speechless going into the match. Gargano starts hot with a spinning heel kick and a somersault senton off the apron to The Miz on the floor. Dragging Miz back into the ring, Gargano hits a kick to the back of the head and then the left hand of The Miz.

Miz gets into the fight with a knee to Gargano’s gut and a corner clothesline, but Gargano responds with a leaping neckbreaker, kicking Miz to the floor and following with a slingshot cross-body. After ads, Gargano brings Miz down from the middle turnbuckle with a backstabber, with Miz hitting a kneeling DDT moments later. They exchange kicks as this fight is going on way too long.

They scrap to the floor, with both taking a turn going into the commentator’s table, but with Gargano in the ring, Miz is seemingly pulled under the apron — or he pushed himself under. He crawls out holding a turnbuckle attachment, urging the ref to look underneath. When the official does so, Miz hits Gargano in the head and that leads to the victory.

Miz brags about the win from the entrance ramp and Lumis attacks him from behind with a chair before taking off away from a group of officials.

Backstage again, Nikki Cross is getting a pitch from Damage Control to join them at Survivor Series. Cross doesn’t really answer — she just laughs maniacally and leaves.

A scheduled match for the 24/7 Championship feels weird. Cross is immediately all over Brooke with her frenzied attack, but it inspires Brooke to fight back with a matching energy, only to see Cross run Brooke’s head into the mat over and over. Cross twists Brooke off the ropes with a neckbreaker and wins the 24/7 Championship to the thrill of nobody in the arena.

Backstage again, Damage Control (including Nikki, I guess?) are moseying along as Cross throws the 24/7 Championship away into a trash can. Saxton now hears The O.C.’s side, who are all feeling pretty good about their new line-up. Then, it’s take 2 of the United States Championship open challenge. And it’s …. not Mustafa Ali who appears on the Titan Tron to accept the challenge before Bobby Lashley grabs him and beats him up to take his place.

Lashley starts the party before the bell, knocking Rollins out of the ring and throwing him all around ringside. Rollins fights back, sending Lashley into the stairs, and the advantage goes back and forth until Lashley effectively cancels the match by running Rollins into the ringpost and then through the commentators’ table.

Lashley heads up the ramp, apparently satisfied with what he’s done, and in a weird bit of pacing we see Austin Theory strut out holding his briefcase before a commercial break. When we come back, Theory is excitedly handing in his briefcase and we have one more match:

Rollins survives a hard punch and even a Pedigree, kicking out of several pinning attempts, but when Rollins tries for a Stomp he’s met with an A-Town Down. Theory goes for a cover, but Lashley pulls him out of the ring at the count of two. Bobby beats Theory up all around ringside just as he did Rollins.

Lashley walks away leaving both wrestlers down, and when the ref comes to he nearly counts Theory out, with Theory sliding into the ring at 9 and right into a stomp for a rare Money in the Bank failure — for a secondary title no less! 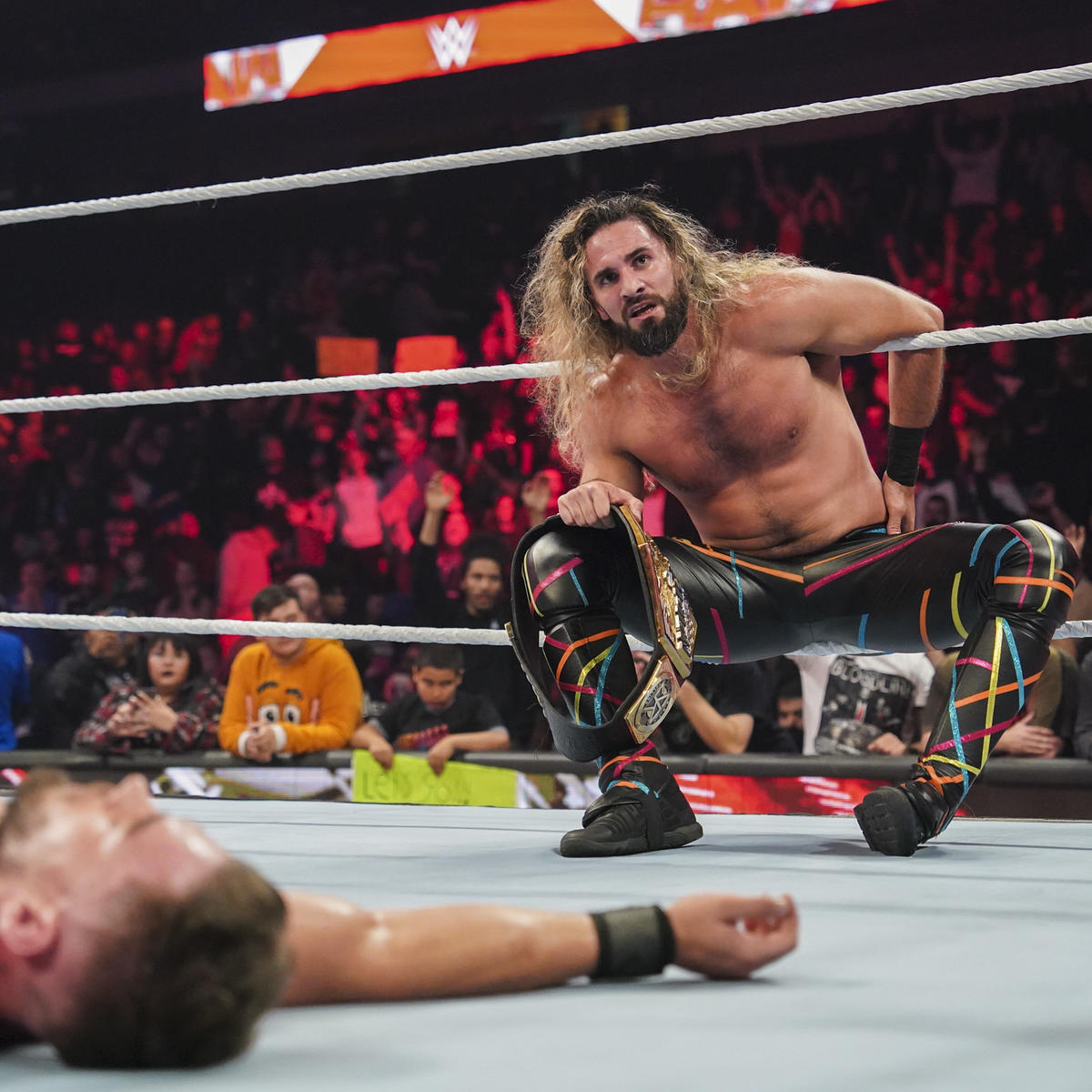 A lifeless crowd gets a show to match their energy. A dead crowd isn’t exactly the performers’ fault, but there wasn’t much done to try and shake the audience out of it … until the final ten minutes, of course. However, ten minutes out of 180 isn’t anywhere close to good enough.