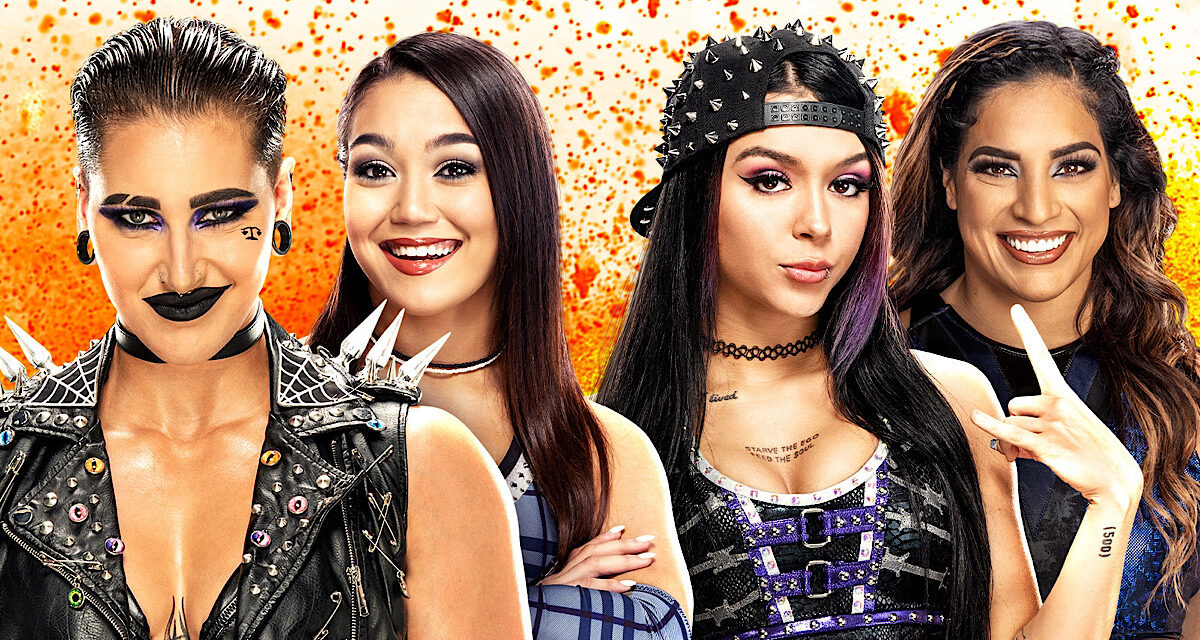 Throughout the past week, NXT competitors like Cameron Grimes and Tony D’Angelo have been reaching out to RAW and Smackdown for assistance in exchange for some crisp Benjamin Franklins. In Cora Jade and Roxanne Perez’ case, they called upon Rhea Ripley and Raquel Rodrigeuz respectively for their “pick your poison” stipulation in the buildup to Halloween Havoc. With Kevin Owens, The O.C. and more, tonight’s go-home show was a stacked way to head into this Saturday’s event.

The Judgment Day arrives in full force looking cooler than ever with Damian Priest, Dominik Mysterio, and arguably the greatest NXT Champion of all time Finn Balor. Any support that Perez may have had is drowned out by “Judgment Day” and “Rhea’s gonna kill you” chants. Already at a size disadvantage, Perez is tossed around by Ripley’s signature strength while her trainer Booker T tries to remain impartial at the booth. Perez eventually sidesteps and dives onto Ripley after picture-in-picture to a “that’s my girl!” remark from the announce desk. She connects with a top-rope hurricanrana for two, but Mysterio provides a distraction for Ripley to hit the Riptide for victory. The Judgment Day have ascended from the shadows of Edge for something much more cohesive, and for Ripley, it’s a jump-off point for an undoubtedly huge future.

The OC and Cameron Grimes prepare in the locker room, and Luke Gallows boasts being the hottest tag team in the business – for a week, at least. Grimes flutters a handful of Benjamin Franklins in Gallows’ face before the trio too-sweets each other.

Grayson Waller is interviewed backstage, confident in beating Apollo Crews at Halloween Havoc. “Saturday caps off the worst comeback story in the history of WWE,” says Waller before Chucky appears on the monitor for some spooky corporate synergy. Chucky announces “spin the wheel, make the deal” for Waller and Crews’ match this weekend.

Tony D’Angelo hobbles into the ring to introduce Lorenzo’s hand-picked opponent “when we come back from this commercial break.” The unmistakable music plays, and the hits keep coming with another former NXT Champion, who arrives to Orlando’s chorus rendition of his theme song. Nakamura dominates with kicks and “good vibrations” while meanwhile, commentary mentions that Waller has “left the building.” The Kinshasa connects, Nakamura plays the world’s smallest violin in front of D’Angelo, and Lorenzo asks his opponent to bring it: Nakamura hits a second Kinshasa for the pinfall victory and a very positive welcome home. In a wholesome moment, D’Angelo tells Lorenzo, “I’m proud of you.”

Axiom wishes Nathan Frazer best of luck in the North American Championship ladder match at Halloween Havoc. In come Mr. Stone and Von Wagner with the tired “internet darling” insults before they separate.

Deville steps in for NXT Women’s Champion and best friend Mandy Rose as Gigi Dolin and Jacy Jayne of Toxic Attraction accompany her ringside. Dolin and Jayne interfere in-ring, but Deville inadvertently takes out the former, which allows Fyre to capitalize with a quick roll-up for three. Numbers advantage overcomes Fyre when Rose makes her entrance, but the challenger fends off Toxic Attraction with her baseball bat.

The broadcast returns mid-match where Mensah makes a comeback for his team, but Williams trips him in the ropes. Lee makes the next comeback but inadvertently kicks Mensah, who takes his frustrations out on Williams as Hayes connects with the top-rope leg drop for three. “When Melo shoots, he don’t miss!” The four continue brawling post-match, and Von Wagner eliminates Hayes with a big boot. From the top dives Nathan Frazer, and all involved in Saturday’s ladder match are floored.

The Schism cuts a handheld promo like another former trio: “No mass of humanity will stop The Schism from tearing you down,” he warns Cameron Grimes.

NXT Champion Bron Breakker is interviewed backstage about his challengers Ilja Dragunov and JD McDonagh. “There’s always something awesome happening on The KO Show, and tonight, I don’t think it’s gonna be any different.”

The Schism vs Cameron Grimes and The O.C.

The Dyad of The Schism takes control over Grimes until The O.C. turns the tide. Booker T compares them to The Nasty Boyz and suggests the latter team be inducted into the WWE Hall of Fame Class of 2023: “Knobbs, Sags, I got your back!” The Schism embrace in a group hug before dominating over good brother Karl Anderson, and Joe Gacy works down rival Grimes proceeding picture-in-picture. Good brother Luke Gallows makes a comeback, and the action breaks loose before The O.C. successfully hit the Magic Killer for the pinfall victory. Gallows and Anderson press Grimes for the money he owes them post-match.

Winners: Cameron Grimes and The O.C.

Veer Mahaan has come to NXT but will not answer what he whispered to Sanga. “Brother, I’m ready to listen,” says the latter.

A package highlights the NXT Women’s Tag Team Championship picture, which consists of champions Kacy Catanzaro and Katana Chance, challengers Nikkita Lyons and Zoey Stark, and not much else. The teams have a short contract signing for their match next week.

Commentary conducts a split-screen interview with Julius Creed and Damon Kemp, who compete in an ambulance match at Halloween Havoc. Both current and former members of Diamond Mine hold their own, but Creed especially strengthens his aura of being a future superstar.

Alicia Taylor is in-ring to introduce the host of Halloween Havoc, Shotzi, who arrives in her miniature tank. “I’m going to make this year’s Halloween Havoc the most terrifying extravaganza in NXT history,” she announces before Xyon Quinn interrupts to offer a co-host position. In comes “Super Diva” Quincy Elliot to suggest a spot too, and Shotzi declares that tonight’s winner will co-host with her this Saturday.

Back from break, Quinn takes down Elliot with a lariat as Shotzi joins commentary. He collapses under the weight of his opponent, and when trying to grab a chair, partner Hank Walker stops him. Elliot delivers the Banzai Drop to win the match and claim his spot as Halloween Havoc co-host.

Class is in session at Andre Chase University as he gives a synopsis of Halloween Havoc. He covers equally important matches like Hulk Hogan vs Ric Flair, DDP vs Goldberg, and of course Mandy Rose vs Raquel Gonzalez. The Yeti and the Chamber of Horrors are mentioned before Chucky takes over the monitors to cuss out Bodhi Hayward.

A quick contract signing between NXT Champions Pretty Deadly and challengers Edris Enofe and Malik Blade is conducted for their match next week.

Rodriguez can’t stop smiling and makes Booker T go, “Oh my god!” with her lat spread. She dominates the opening goings until Jade introduces her big stick, which Rodriguez uses without a second thought for a disqualification. Roxanne Perez blindsides Jade and is lifted up onto Rodriguez’ shoulders post-match.

NXT’s midcard menagerie is partying in the back with Brooks Jensen and Josh Briggs, who go over their drinking game rules while watching the forthcoming segment.

“Welcome home” chants are directed towards Monday Night Raw’s Kevin Owens for an episode of The Kevin Owens Show with guests Ilja Dragunov, JD McDonagh, and NXT Champion Bron Breakker. The host calls “JD Mc-don’t-Google-me” a huge creepy weirdo: “I feel like I need a shower just looking at you.” Dragunov fires up towards the champion: “I will recapture what should have been mine in the very first place!” The champion retaliates back, “As long as I’m breathing, this championship will be mine!” Owens continues dogging on McDonagh, who is called out for letting Breakker and Dragunov heat up into a pull-apart brawl.

Dragunov hits Torpedo Moskau on both opponents and holds up the NXT Championship before “A-Town down” hits the speakers. Mr. Money in the Bank Austin Theory makes an entrance, making his intentions known for Saturday’s main event.

The energy throughout was amazing, and the RAW and Smackdown competitors in this environment felt like superstars. Rhea Ripley and Kevin Owens were clear highlights, although the latter buried JD McDonagh deeper than a casket. Another fun show for NXT, and things are really rolling for the brand and promotion in whole.