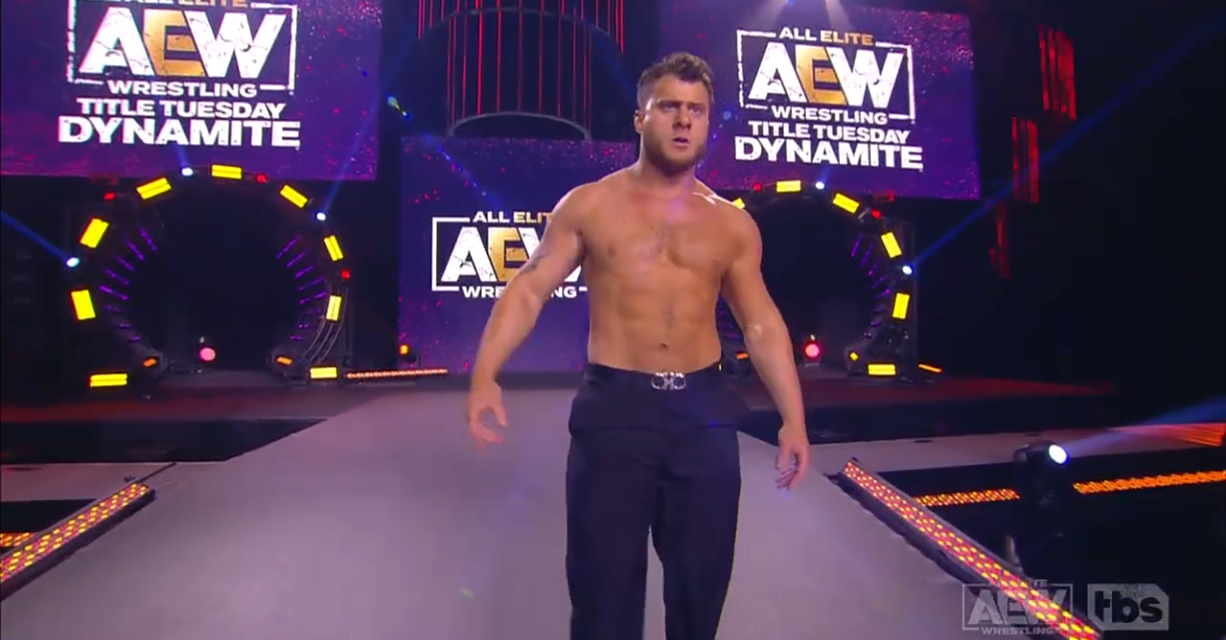 It’s Tuesday night and why do we have Dynamite, tonight? Well, there’s playoff baseball tomorrow night, that’s why. AEW is loading up tonight’s show as they are going head to head against NXT. In this age of DVRs does that even really matter. Anyway, we could call tonight Title Tuesday, so let’s get right to the action.

Last week, Orange Cassidy took the AEW All Atlantic Championship from Pac, now he’s coming for his trios tag team belt. Pac nails Orange Cassidy at the bell, but Trent Beretta is the legal ma and nearly gets a roll up pin. Taylor gets double team by the Lucha Brothers in the corner. A senton atomico isn’t enough to to get the pin though. Pac and Penta break up a triple team. All three fly over the top rope to take out the Best Friends on the floor. Death Triangle deals out kicks to Cassidy. Orange with a counter on Pac into Stundog Millionaire. Trent with a DDT to Fenix. Pac is sent to the floor, but Beretta is nailed with superkicks from the Lucha Bros. Orange gets worked over by Death Triangle, again. Pac makes the pin after bridges a German suplex. The Best Friends break the pin.

Fenix is tossed into the ringpost, leaving Pac alone in the ring to take a Half and Half combination. Penta takes back to back piledrives from Taylor and Beretta. Cassidy splashes Penta, but Pac breaks the pin. Pac grabs the bell hammer. Fenix stops him and takes it. Orange nearly gets a pin on Pac. Cassidy hits the Orange Punch. Trent tags in and runs into a kick. Barretta blocks the destroyer and hits Strong Zero. Rey Fenix flies in to break the pin. The Best Friends take a double cutter. Fenix hits Beretta with a sit out piledriver. He covers Trent to get the win.

Brit Baker isn’t thrilled to watch the Interim Women’s World Championship match tonight as she believe her or Jamie Hayter should be the champ. One of them vows to be Women’s Champion, notice no interim there, by the end of the year.

Shida and Storm shake hands before the match. The two lock up. Shida with a drop kick, but gets caught on the apron. A hip attack sends her to the floor.

After a commercial break, Shida connects with a jumping knee and then rains down rights mounted on the turnbuckle. A missile drop kick finds its target in the champion. The two trade shots, until Shida drops Storm with an enziguri. Storm takes Shida up top, but Shida fights her off with head butts. Hikura hits a meteora and follows with a gut wrench, but it’s not enough to get the pin. Storm ducks a springboard drop kick. Storm connects with a German suplex and hits a hip attack. Shida blocks a DDT. Storm blocks the kitana. Storm blocks a jumping knee and counters with a German suplex. Storm hits Storm Zero and gets the three count.

After the match, Jamie Hayter and Rebel hit the ring from the crowd. Brit Baker walks down the ramp, but gets jumped by Saraya. She tosses Baker into the security barrier. Riho runs in, taking out Rebel with a a drop kick. She sends Hayter back to the floor and takes her out with a cross body block from the top turnbuckle.

Wardlow has zero tolerance for disrespect and calls out the Kingdom. Samoa Joe tells them they can pick either title to take a shot out.

FTR tells Renee Paquette that all they want is to be the greatest tag team champions of all time. They know there are giant targets on their backs with all their title, but they want the AEW World Tag Team titles. Swerve Strickland and Keith Lee have something to say about that. They think they deserve FTR’s spot, but Keith Lee doesn’t feel that way. Dax Harwood gives them an oppurtunity to earn the number one spot.

Backstage, Jay Lethal wants to talk to Darby Allin. Lethal wants a rematch. Darby wants to know when this is going end. Sonjay Dutt tells Darby that thye know his weakness. So much for no physicality as the two start throwing punches. Allin is whipped into a garage door and falls underneath it. The door is shut on Allin and then Lethal locks in a figure four before AEW officials can pull him off.

Tony Schiavone is in the ring to interview Williams Regal, when MJF crashes the proceedings. Max wants to talk, not fight. He has a story and Regal owes him to listen. MJF tells the story of him finally getting an opportunity as a WWE extra. Regal greeted the extras, telling them to go to the ring for a tryout match. MJF was to go second. Max was nervous, but he was fighting for his life. Regal pulled him aside after the tryout and gave MJF three minutes to sell himself. Regal told MJF he was going to get him a WWE job. MJF thought he was going to be a superstar, until Regal told him he was too young at 19. Regal did give him hope, telling MJF to work hard and send him a match and promo every month. Three months later Regal blew him off. Regal squandered his dream. That made MJF want to quit. He didn’t want the naysayers to win, though. Regal is now a sad old man that got fired. MJF is set to become the world champion.

Regal tells MJF he did that to light a fire under him, so he didn’t have to go through what Regal did at 16 years old. Regal tells MJF if an email fired him up; he had it easy. Regal would never lay a hand on an announcer like MJF did to Schiavone. Just because you are making lots of money doesn’t mean anything. Regal tells MJF not to take any shortcuts and he still has a lot to prove.

The AEW World Tag Team Champions, The Acclaimed, and Billy Ginn welcome Renee Paquette to AEW. On Friday the Acclaimed are taking on the Varsity Athletes in a Title versus Trademark match. The Acclaimed need to get their scissoring on.

Earlier in the day, Renee Paquette sat down with Bryan Danielson and Wheeler Yuta. Danielson wasn’t happy about losing to Chris Jericho. Bryan still has high hopes for Daniel Garcia but he needs the right guidance. Wheeler Yuta saw Garcia’s actions coming from a mile away and is not happy with Danielson. Yuta walks out of the interview.

Jericho offers a hand shake to observe the Code of Honor. Castle sticks his hand down his pants and then flips Jericho off. Castle is sent to the floor, where the Boys fan him down. Castle hits a neck breaker and then a gut wrench suplex. Dalton tosses three of his boys into Jake Hager.

After a commercial break, Jericho is chopping away at Dalton in the corner. Castle flips the script, delivering chops of his own. He whips Jericho across the ring, but then misses on a knee charge. Castle hits a suicide dive and follows with a head scissors. Hager is swarmed by the boys. In the ring, Castle and Jericho collide in the ring. The Boys have stolen Jake’s hat an he starts to throw them around like rag dolls. Castle kicks Hager through the ropes, and then nearly gets rolled up by Jericho. Dalton counters the Walls with the Julie Newmar body scissors. The champ punches his way out of the hold. Jericho locks in the Walls. Dalton is able to get to the ropes to break the hold. Dalton connects with the clothesline and then a suplex. Castle counters the Code Breaker with aa spin cycle, but Jericho kicks out before the three count. Jericho hits the Judas Effect out of nowhere. He covers to get the win.

After the match, Jericho talks about how is he taking out everything Ring of Honor and goes after commentator Ian Riccaboni. Jerry Lynn, a former RoH champion runs out. He stops the attack, but gets slammed onto the Ring of Honor title for his trouble.

Christian Cage says they are done with Jungle Boy and are to bigger things. All AEW Champions are put on notice.

Jade Cargill lays into her Baddies for not finding Nyla Rose or her TBS title. Cargill calls out Tony Khan. She wants him to get Nyla Rose to return the belt or she will hijack Ramage on Friday.

Page confronts Moxley in the crowd and the fight is on. Well, not officially. Page suplexes Mox on the concrete floor. Page climbs atop one of the tunnels, hitting the champ with a moonsault. During the commercial break, Page keeps up his assault, busting Moxley open. The bell finally rings.

Page has Moxley on the ropes, staggered in the ring. The challenger with a snap suplex into a lateral press for a two count. Mox absorbs the punishment and locks in a figure four. Hangman claws at the wounds on Moxley’s forehead. The champ pummels Page in the corner, but then gets whipped hard across the ring into the turnbuckle. Page with a fall away slam and the challenger springs to his feet. Mox hits a cutter out of nowhere. The champ hits a lariat in the corner and hammers away with rights. Mox rakes the back and drops Page with a superplex. Page breaks the grip on an armbar. We see that MJF’s luxury box is empty. Hangman hits Dead eye on the apron, sending the champ to the floor.

After the commercial break, both men are jockeying for position on the top turnbuckle. Page hits a fall away slam. Hangman blocks a Death Rider and hits a comebacker. Moxley decks Page with a King Kong Lariat. AEW officials jump into the ring to check on Adam Page after that lariat. The ref calls for the bell. The ringside doctor has stopped the match. Moxley retains, but he isn’t pleased.

William Regal comes to the ring as a gurney is brought out for Page. The Cincinnati fans cheer for Adam Page as he is taken out of the ring. During this time, the camera does not cut away from the announce team. Moxley wishes a fast recovery for Adam Page, but he knows this is a dangerous game. To be successful you have to put everything on the line. Since Mox has a live microphone; he calls out MJF, who answers and drags a ref to the ring. Regal can’t believe what Mox is doing. Regal says something to MJF. He sprints up the ramp to grab a microphone. MJF says he will cash in that chip but he wants Moxley at 110%. He wants Moxley to know he is better and will cash in at Full Gear. MJF is going to earn that title. Moxley tells MJF all he is going to earn is Moxley’s boot in his mouth. Getting in the ring with Moxley is dangerous.

That’s the show. See you is seven! Wait make that eight!

Even though no titles changed hands, Title Tuesday felt like success. The match were all very high quality. MJF and William Regal put on a passionate promo in the ring focusing on the desire to wrestle and their shared history. The ending of the show was marred by the injury to Hangman Adam Page. Here’s hoping the injury isn’t serious and Page makes a fast recovery.