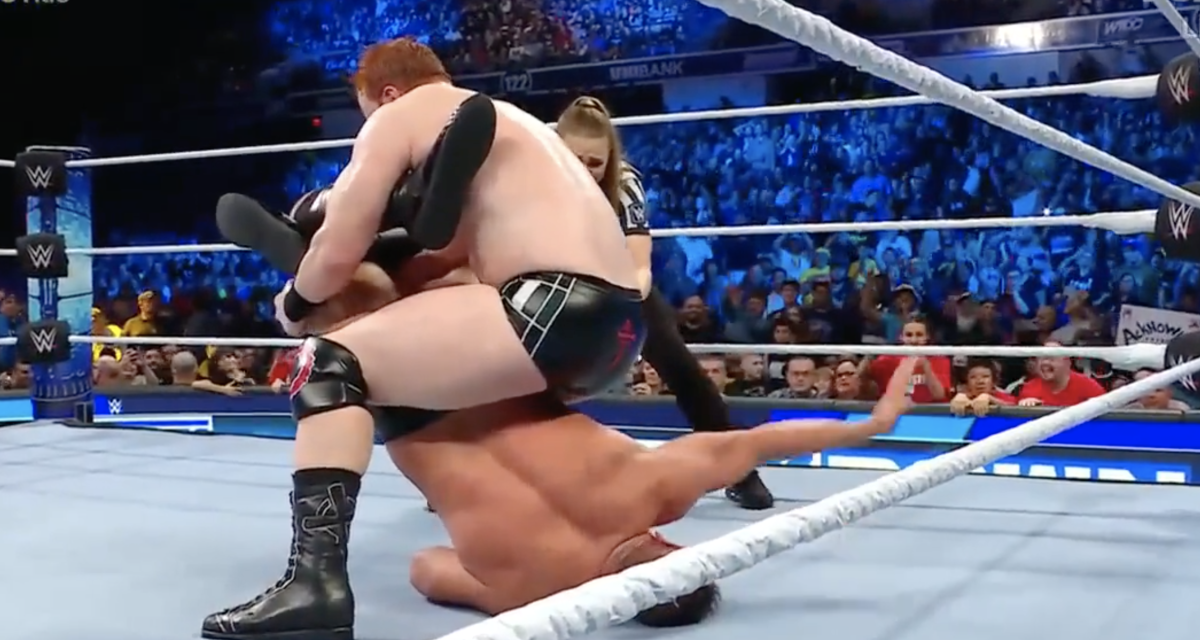 I was mega ecstatic when Triple H showed up to kick off tonight with a thank you to the audience. And speaking of excitement, I was beyond thrilled when Roman Reigns’ theme song started playing. I was yelling, screaming, putting my We the Ones finger up. Absolutely enthralled! Along with Sami Zayn’s awful dancing.

Also, Wade Barrett is Michael Cole’s new partner, at least for this evening. “Michael, you’ve had more husbands than anyone,” he said as he starts talking. Referring to the fact that he’s been at that announcer table with Pat McAfee, who disappeared, Corey Graves and now, Wade Barrett.

When I saw Barrett’s face, I was like “former Nexus member, my God. New news.”

Anyway, I also thought Roman said “Whoop some ass” rather than the name of the state SmackDown is currently broadcasting from. Hilarious.

What I didn’t expect to happen was when Logan Paul went after Jey Uso for some reason. He said “I’m seeing double,” as if that’s an insult. They’re twins, you fool! Later, Sami helps calm Jey and Roman down with surprising wisdom to the benefit of The Bloodline and a ruination in Paul’s face.

I will excuse his terrible dancing for today because he made a concrete case against Logan, reminding Reigns’ opponent that he will be another boneless carcass laying on the floor in defeat. I wanted to be more graphic, but… I think I might get demonetized.

As Rico makes his way to the ring, he does his usual body flipping to row the audience, yet Solo takes Ricochet out with a violent crossbody. The match hasn’t even started… Ha!

Ricochet had Sikoa unbalanced and off his game tonight with the assist of his high flying maneuvers, which angered Sikoa enough to get a chair. Unfortunately, I think, Sikoa couldn’t use it because of the referee’s warning.

Solo delivers a noteworthy right hand to Rico’s jaw, sending him off the ropes and landing on the back of his neck. That could have easily taken him out of the match, but he stayed.

Rico was looking to make a grand splash from the top rope, yet abruptly, Solo comes out of his knockout to catch his challenger mid-air to plummet him with a Spinning Solo for a victory.

Backstage in The Bloodline’s screening room, Sami goes a bit further in his praises for Solo’s winning streak. Saying that he has a flow of friendship, let’s call it, with him. Also adding that he took Sikoa under his wing, that didn’t make Jey happy… Zayn called the other half of the Uso twins a “hothead”, which is something they all had to deal with growing up.

This has become a Sami problem for him to deal with Jey. Like a babysitter I thought to myself.

I don’t know why, but this is news to me. Jey didn’t come off as a hothead while I watched him wrestling growing up, maybe I didn’t open my eyes wide enough. What am I doing wrong, guys?

And as if getting pissed with Sami elsewhere wasn’t enough, the Usos and Zayn bump into The New Day. Because Sami acted like Jey’s… uh, boss according to Woods and Kingston, they’re going to deal with whatever animosity they have in the ring.

As we move on from that, we were supposed to have a match with Hit Row, shockingly, they got attacked by Queen Zelina’s friends, who’s back mind you with platinum blond hair. The Legado del Fantasma are a trio of ass kicking men.

Now this is a team I never thought I’d see. Li and Deville? Whaaa? On the other hand, Rodriguez and Shotzi formed their bond based on mutual respect.

They’ve both had problems with Damage Control in the last couple of months. So this was fate. A dream team if you will. I just hope that Shotzi’s “taking care of business” tank will actually grant her a win… unlike last week.

Anyway, Shotzi and Sonya start this match up by going around in circles, that is until Xia distracts Shotzi, so Sonya could deliver a cheap shot from behind. Then Deville punches Shotzi out before performing a running knee to Shotzi’s face. I can only award Deville for a change in outfit, that’s all.

Xia is tagged in, and she makes great work out of Shotzi with a knee to her face and a Fisherman toss over her shoulders. Li and Deville plan to plummet Shotzi with double the impact, she manages to slip through and tag Raquel.

Rodriguez bulldozes through her opponents with a wicked Fall Away Slam and a Spinning Corkscrew from the middle rope to Sonya. Xia came in to assist, yet she was swiftly taken out with a double team effort from her challengers.

Raquel has Deville up in the air for a Tahana Bomb for a beautiful victory.

You can’t see me, obviously, but if you could, I’m shaking my head in confusion. Am I the only one who thinks Raquel should have a stronger partner who doesn’t seem have the tendency to get knocked out so quickly? It almost feels repetitive, no?

You know, Liv Morgan has been showing her more vicious side these past two to three weeks, but I have to agree with Ronda Rousey on this one. Yes, Liv can go far, but from what I’ve seen recently, it feels more like a surface wound. Rousey has gone very deep, so deep in fact that her extremities are unmatched. Morgan has too much space to fill if she wants to retain her title. Delusion and/or overconfidence could be a fatal game. For who? You choose.

I don’t know what Karrion Kross was here for, to talk or fight. Oof. Who cares. But, Drew McIntyre had opportunity on his side as it’s his turn to sneak behind Kross to deliver his medicine. Yet he somehow ended up losing due to the security’s wrongly timed interference.

McIntyre had his hands bound to the strap he brought to taunt Kross with, instead it was used against him as Karrion whips Drew’s back with it countlessly. It was horribly entertaining. I’m amazed at myself for finding the beauty in violence… Concerning? Hmm, nope.

I almost fell off my bed when Strowman came out as The New Day’s mystery partner for this fight. Sami made the challenge, so… it’s his fault. Braun has been on a proud winning streak lately, so this is a major surprise, I love it. Thank you for more new blood.

During a great portion of this fight, the twins and Zayn had The New Day destabilized by keeping them away from Strowman. That was the plan, I gathered.

It went semi-well at the beginning, yet it got worst. Jey and Sami kept arguing, shouting at each other. Jey doesn’t trust Sami, as I’ve mentioned, and Sami is just trying to help The Bloodline. Or so the audience thinks…

I actually got concerned at some point at how frequent the lack of team building there was between Zayn and Jey. That cost them this match, but I believed they could have won even if Strowman was here. By working as a team.

Jimmy was left in the middle to attempt at calming the situation. The majority of this fight was Jey and Sami yelling. Because of this, Jimmy got hit by Kofi, who manages to make a tag to Braun. The one they truly wanted to avoid. Sucks to be you.

Strowman comes in and ploughs everyone like cheap walls. Amazing how he didn’t hesitate to throw them down.

Jimmy just received a choke slam from Strowman before he felt like venturing outside the ring to violently scatter Jey and Sami, who are sharing some words. Jey most of all. I didn’t notice he was swearing. My God. Jey even crashes into Michael Cole, making him look like a shopper getting squished during Black Friday deals. It was too much comedy for me. Barrett was fine though.

Jey was down. Sami was down. Jimmy was once again the last one left. He thought Braun was acknowledging The Bloodline by putting his We the Ones finger up, to Jimmy’s dismay, New Day played a double team by allowing Kofi to send Jimmy a spine breaker and Xavier a heavy boot to his face from the top rope for an impressive win. Yikes really…

So, the Maximum Male Models are really going at it in their fallout once Max Dupri beats the living hell out of his protégés off camera because he still feels embarrassed and robbed of any supremacy he mistakenly had. I saw them on the ground like mannequins. Lifeless and as plastic as they emote, the models to a T.

This one was the most brutal of them all. This was supposed to be Sheamus’ night, everyone was behind him as you see him punching Gunther to exhaustion.

He gave Gunther at least 30 chest pounds for good measure, it was his time. He had the champ wheezing for mercy. Sheamus’ chest was covered in bruises and cuts, bleeding. His tolerance was remarkable.

He has Gunther in a corner, lifts him onto his shoulders, climbs to the second rope of the ring, and  gives one hell of a White Noise to his opponent. It unfortunately wasn’t enough to pin the Ring General down.

I was happy when Shemaus used his Clover Leaf submission move to make Gunther tap out. What pissed me off, however, is that even though we all saw the General tap twice, the goddamn referee canceled it. Somehow, I’m thinking you have to tap more than that, rapidly, in order to call it a win.

FORMALITIES. NONSENSE. I shrieked alone in my room when I saw Gunther tap, but then I realized I didn’t hear the bell, so I quickly got up. This was bull.

Sheamus won here, pure and simple. He was snaked from under. As we continue, Gunther and Sheamus were in the ring tired. That didn’t stop the rest of The Brawling Brutes to attack Imperium. They went at it like there’s no tomorrow. Priceless. For the time being…

Gunther delivers a chop to Sheamus’ chest as he returns fire with a knee to the champ’s face. Sheamus has the opportunity, til suddenly—suddenly Ludwig “asswipe” Kaiser hands his General the shillelagh Butch brought in.

Sheamus was preparing himself for the Bro Kick just as Gunther uses the shillelagh to knock him out and then pin him for a cheated win.

The official never saw it since she was dealing with the commotion on the ground floor. Shocker.

TOP PHOTO: Sheamus has Gunther in the Clover Leaf position. Courtesy of WWE