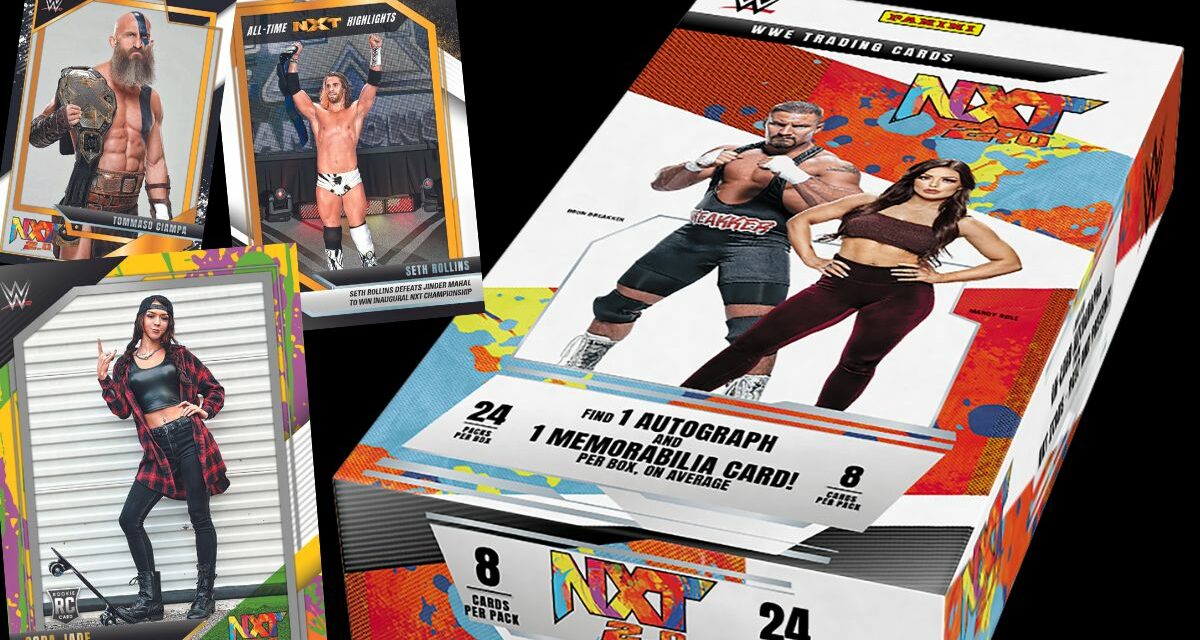 Since acquiring the trading card license for WWE, Panini has wasted little time meeting the demands of wrestling card collectors. In April 2022, Panini released the debut edition of WWE Panini Prizm; in June 2022, Panini released WWE Revolution; and in July 2022, we saw the release of WWE Select.

The latest release of Panini WWE cards came on September 9, 2022, with its most accessible and affordable release to date, WWE NXT.

Trading cards featuring WWE’s NXT brand have been available for years via Topps, dating as far back as 2010, including the likes of Daniel Bryan, Heath Slater, Husky Harris (Bray Wyatt), and Skip Sheffield (Ryback), to name a few, and as the significance of rookie cards has grown in the professional wrestling trading card community, NXT trading cards have played an important role. Not unlike Bowman in baseball cards, NXT is where collectors see some of the first (or earliest) cards of their favorite wrestlers, and while not every wrestler in NXT will become as popular as Sasha Banks, Becky Lynch, or Charlotte Flair, the possibility of future greatness is what attracts many wrestling card collectors to the NXT brand.

Each hobby box of 2022 WWE NXT contains 24 packs of eight trading cards, with one autograph card and one memorabilia card per box, about one insert or parallel card per pack, and “a plethora of rookie cards from the NXT ranks,” and for the average price of $75 per hobby box ($72 if you order direct from Panini), I couldn’t resist buying a box for myself.

Most recent boxes of wrestling cards contain far fewer cards than 2022 WWE NXT. For example, 2021 AEW Upper Deck had 16 packs of eight cards and 2022 Panini Prizm WWE contained 12 packs of 12 cards, so this box of 2022 WWE NXT felt heavier than most boxes I’ve opened this year. The box and packs also looked great, with NXT champions Bronn Breakker and Mandy Rose serving as the faces of this new product, and the colorful NXT 2.0 logo featured on the packaging and cards.

The base cards themselves, however, weren’t as colorful as I hoped, featuring a pretty conventional white, black, and gray border, and the width of the border resulted in what appears to be somewhat smaller images, even if the photography itself was good, including lots of in-ring shots of the wrestlers.

In my very first pack, I saw the side of a thick piece of cardboard, and thought I already pulled my one memorabilia card, but it turned out to be a spacer, a piece of cardboard used to either protect the cards inside the pack or fool pack searchers. What I did pull was a purple parallel card numbered out of 99 of Jinny from NXT UK. However, in my second pack, I did pull a memorabilia rookie card of Ivy Nile from Diamond Mine. The memorabilia included in the card was a small dark swatch of fabric, presumably from a t-shirt worn by Ivy Nile. I would’ve preferred to pull a memorabilia card with a more colorful swatch, or better yet a memorabilia autograph card, but I was happy that my one memorabilia card was a rookie of someone like Ivy Nile who many feel has a lot of potential. 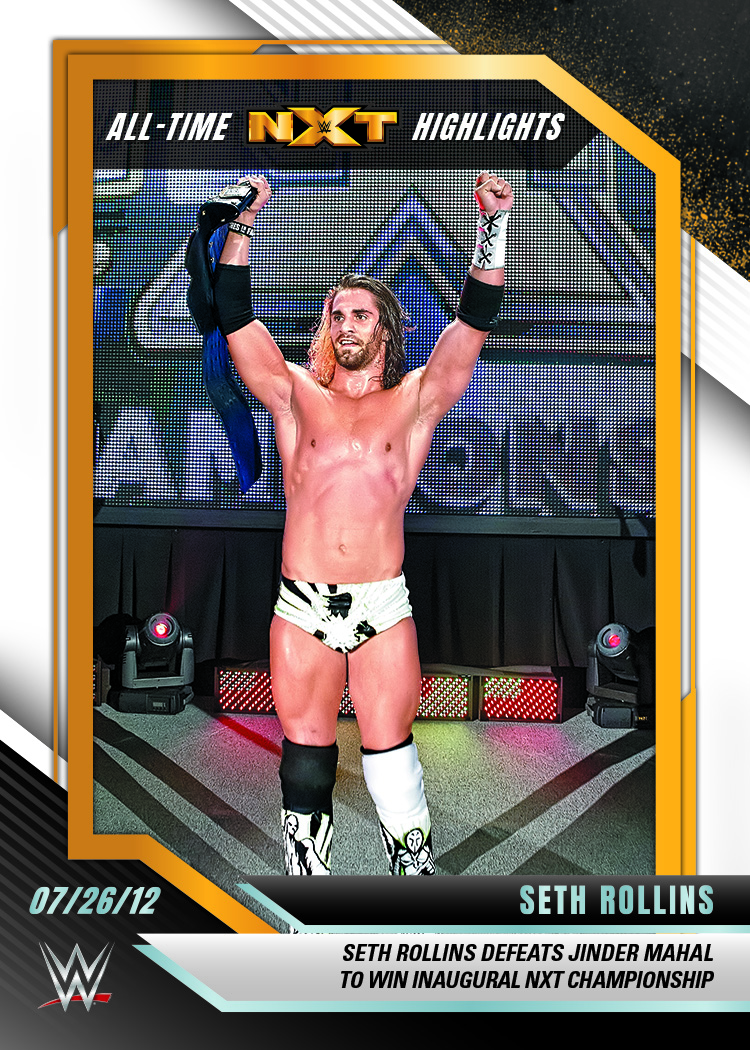 By my fourth pack of cards, I noticed the names on the front of the cards were somewhat difficult to read. The names are in silver foil and the type was quite small, so I found myself squinting to read the names, even if I knew who they were, but perhaps that is just the reality of opening packs of trading cards at the age of 43. Anyway, in my fourth pack of cards, I pulled a gold foil Seth “Freakin” Rollins. One of the nice additions to 2022 WWE NXT is the inclusion of NXT Alumni, which you find about one per pack. I do think it’s a little silly that WWE now includes the “Freakin” moniker of Rollins’ name on his trading cards, but that’s a minor complaint from me. I’m a big fan of Rollins’ wrestling career, and I think his cards are extremely undervalued. As for my next two NXT Alumni, I pulled Damien Priest and Corey Graves. I briefly wondered to myself if this was Graves’ first card as a wrestler, rather than a commentator, but quickly found that Graves also had an NXT card in 2014 Topps WWE.

Eight packs into my box, I realized I was unfamiliar with many of the names included in this set. Panini wasn’t lying when they said there was a “plethora” of rookies. Most of the cards I pulled had the rookie logo on them. It’s also a very NXT UK heavy set, and being that I don’t regularly watch NXT UK, I really only know the NXT UK names who’ve broken through to the American audience (and now NXT UK does not even exist…). So, with its emphasis on rookies and prospects, and also in its simple, conventional design, 2022 WWE NXT reminds me a lot of modern flagship Bowman baseball card sets.

In my ninth pack, behind a cardboard spacer, I pulled a card of NXT UK’s Wolfgang, numbered out of 25. This card was very colorful, with a splatter paint styled border. This was one of the NXT 2.0 parallels, and I wished more cards in this set had this much color and pop.

When I opened pack ten, I saw another thick piece of cardboard, and behind it, a glimpse of another more colorful card, but before I got to that, I pulled rookie cards of Jayce Jane of the tag team Toxic Attraction, Carmelo Hayes, and Cora Jade. This pack was loaded with big rookies. The thick cardboard was another spacer, but behind it was an autograph card, a Marcel Bartel numbered out of 49. This was a great looking card, with a full, on-card signature in blue ink. Up until the release of 2022 WWE NXT, all other Panini WWE cards featured sticker autographs, so NXT having on-card autographs was one of the big selling points for a lot of wrestling card collectors. This was, by far, the best pack of my box, but I still had fourteen more packs to go. 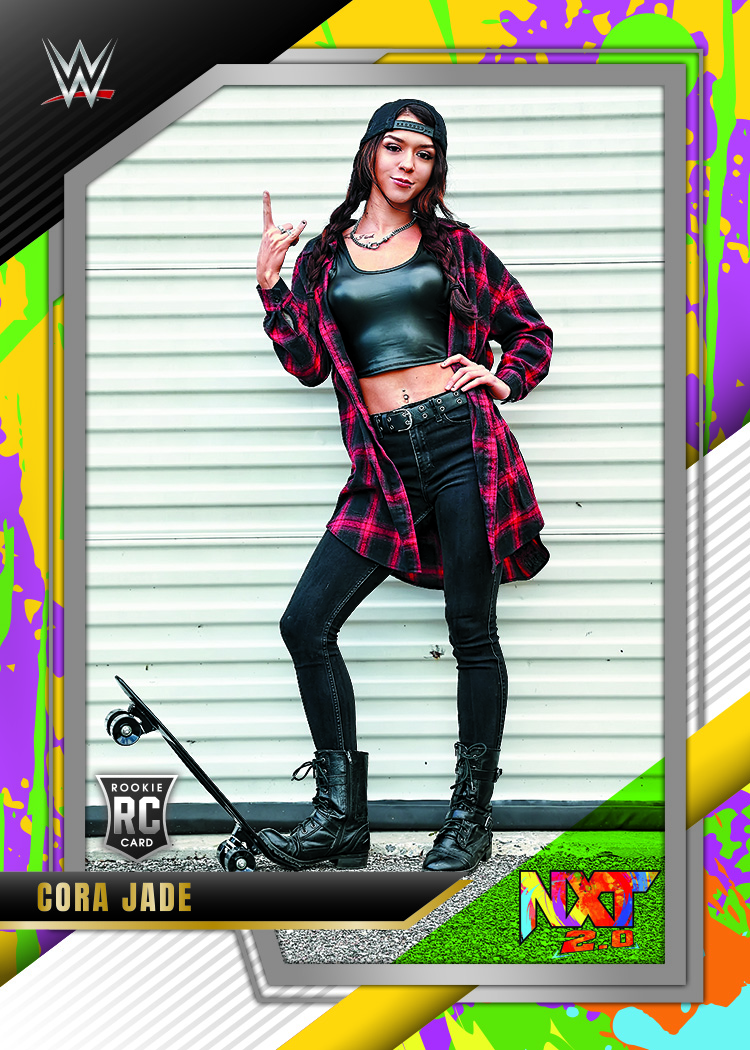 As I proceeded to open more packs of 2022 WWE NXT, I noticed there were a lot of duplicate cards. Granted, there were more cards in the box, overall, but I hoped for better collation of the cards in the remainder of the box, because there’s a pretty big checklist for this set, and I assumed the cards would be more spread out. I pulled a nice Gigi Dolan base card, my first Bronn Breakker rookie, and a Roman Reigns NXT Alumni card, and after a quick coffee break, in my 15th pack, I pulled dupes of Carmelo Hayes and Cora Jade, and an Ashton Smith NXT UK red parallel out of 199. This was when I noticed a pattern that all three packs with numbered cards had cardboard spacers in front of the cards, and also that all of my numbered parallel cards were of wrestlers from NXT UK, although the NXT UK detail was probably just a coincidence.

In my 16th pack, I pulled my first Nikkita Lyons rookie, and a great looking NXT Gold insert of Mandy Rose. I followed that up in subsequent packs by pulling NXT Gold inserts of Asuka, Bayley, and Gigi Dolan, which again called into question the collation of these cards, even though I really liked the style and theme of this insert. I also pulled rookies of Tiffany Stratton and Tony D’Angelo, and a dupe of Bronn Breakker, and nothing else too notable happened until my second to last pack, when I found one more noticeably thicker pack, again with a spacer inside, and I pulled a Joe Gacy rookie, a Triple H base card, and a Nathan Frazier blue parallel NXT UK rookie numbered out of 149.

After opening all 24 packs of 2022 WWE NXT, I took stock of my inventory. I had 13 NXT Highlights inserts (my least favorite type of insert), four NXT Gold inserts, five base parallel cards, with all four numbered parallels being wrestlers from NXT UK, an Ivy Nile memorabilia rookie card, a Marcel Bartel autograph numbered out of 49, a big ole stack of base cards full of rookies, and four thick cardboard spacers, which I’ll likely save and reuse when I trade cards with people via the mail.

Overall, 2022 WWE NXT is a good-looking, fun, and accessible trading card set with lots of popular rookies and the possibility of some big hits, and with hobby boxes currently selling for less than $75 per box, it’s a product I’ll consider revisiting in the future.