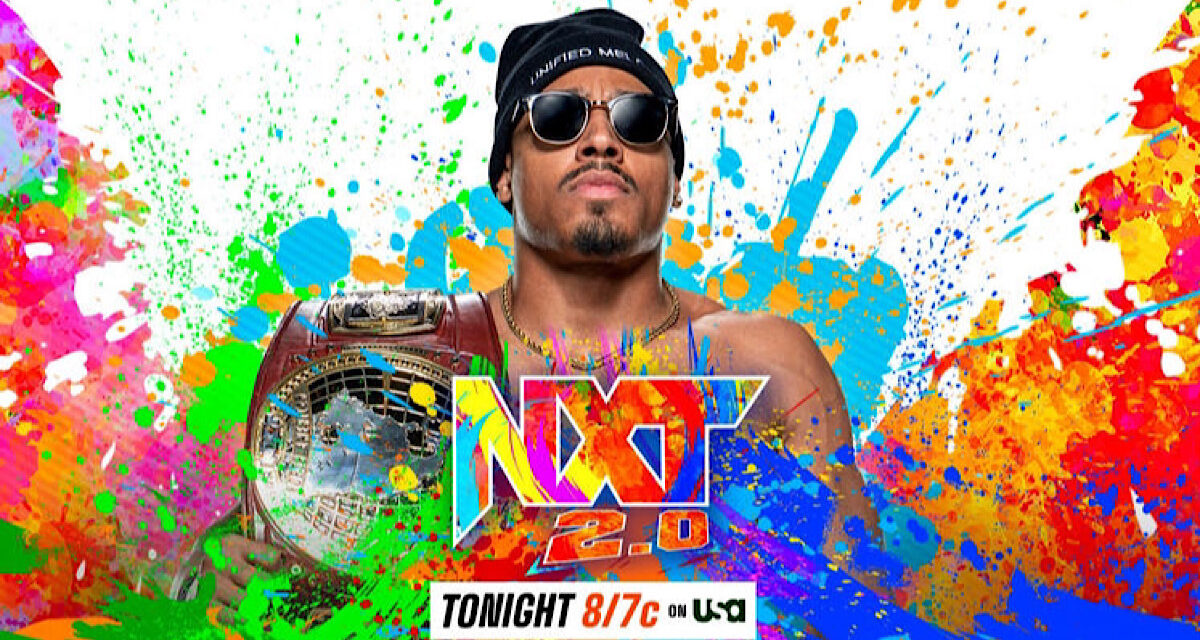 It’s been a year since NXT transitioned from black-and-gold to rainbow splotches with a whole lot of other polarizing change. In retrospect, an awfully rough start grew into a consistently solid weekly program, building up future stars like Bron Breakker, Carmelo Hayes, the Creed Brothers, and many more. Tonight’s episode celebrates one year of NXT 2.0, rainbow splotches and all.

Technically the most decorated tag team in NXT are Pretty Deadly, but luck isn’t with them in tonight’s fan-voted steel cage match. They immediately attempt to escape the cage, but the Creed Brothers drag them back inside for a beatdown. “Hey, Wade, watch this!” shouts the uber athletic Julius before hitting and landing a top-rope Spanish Fly to Elton Prince before picture-in-picture. The champions corner him and deliver a huge superplex from atop the cage, but he’s up within a minute to assist Brutus with a cannonball Doomsday Device. Out comes backstabber Damon Kemp, who manages to handcuff Julius to the chain link, and Brutus is left to keep Pretty Deadly in-ring. He kicks out of Spilled Milk, but another double-team finisher from Pretty Deadly puts it away. Great storytelling from both teams, and the Creed Brothers continue to look like superheroes.

Von Wagner, Wes Lee, and Joe Gacy are backstage awaiting the fan vote that determines who will face Carmelo Hayes for the North American Championship. Lee is declared the winner, and Gacy gives a creepy handshake in acceptance.

Despite the polarizing change, a montage recaps the numerous great moments and new faces that NXT 2.0 has produced within the last year.

Henley is accompanied by Josh Briggs and Brooks Jensen of course, as well as Mason “The Night Howler” Ramirez as part of Connor’s Cure. It’s been one year since the inception of NXT 2.0, and the brand has evidently not given up on Legend yet. But Henley quickly hits a Shining Wizard to gain the pinfall victory.

Yulisa Leon reveals to Valentina Feroz and Sanga that she will be sidelined for nine months. “Oh my god, how depressing. You’re upset? We’re upset,” barges in Mr. Stone with Von Wagner. Sanga doesn’t appreciate the language used because “there are ladies present.” Hoss fight incoming.

Fallon Henley backs up Brooks Jensen for fumbling the bag in front of NXT Women’s Champion Mandy Rose, who is in-ring with Gigi Dolin and Jacy Jayne after break. It wouldn’t be a true NXT 2.0 anniversary without an annoying Toxic Attraction promo. Their boasts are interrupted by Alba Fyre, attacking the faction with a baseball bat before their retreat.

A promo package further explains the turn from Cora Jade, citing the Natalya feud as a game changer. She insults all the members of the women’s roster and vows to be “the number one woman in this entire industry” by next year.

Wendy Choo responds to Jade’s comments before being interrupted by Lash Legend. “The last time a bimbo tried to come up at me, I had her lights turned out,” claps back Choo.

The debuting “Super Diva” appears on a rotating chair, struts to the ring, and grazes his glutes on the ring posts – “bringing a unique charisma to the ring,” says commentary. After popping his hips and doing the Nae Nae, he delivers a Banzai Drop for the pinfall victory.

Cameron Grimes is asked who his partner is against Tony D’Angelo and Channing Lorenzo, and it looks like he’s going it alone.

Wes Lee is preparing in the locker room when Trick Williams and Carmelo Hayes attack him, slamming his head with a locker door. “This is for the Rounds Match!” Williams reminds him of that fever dream.

Grimes has gotten offers from both The Schism and The D’Angelo Family, and turning the latter down has resulted in a two-on-one assault. Joe Gacy appears and emphatically grabs the tag rope, but Grimes doesn’t accept the tag. Gacy instead makes a blind tag and the comeback, and despite an initial argument, the duo hits simultaneous finishers for the victory. “I don’t need you!” insists Grimes, and The Dyad blindsides him in return. Yes, yes Grimes really does need The Schism.

A vignette from JD McDonagh makes skin care and shaving evil. He’s inadvertently nicked and stares at his blood in admiration while commenting on he and Bron Breakker’s “cat and mouse game.”

Earlier this week, Vic Joseph sat down with NXT Champion Breakker to recap his storied year in NXT 2.0. From the very first match, feud with Tommaso Ciampa, WrestleMania weekend, shenanigans with Joe Gacy, and unification against Tyler Bate, Breakker has had a breakk-out year. Backstage, Bate is looking for a rematch with Breakker, but standing in his way is McDonagh.

The accountant and the pageant girl take control over Lyons until Stark makes the comeback. Stark’s intensity is like no other, and after delivering the C360, Lyons gets the notorious split-legged pinfall victory.

Malik Blade and Edris Enofe are talking to a hooded representative of The Schism when The Dyad attack them in the parking lot. Meanwhile, Wes Lee is out in the trainer’s room after he, too, was attacked.

A vignette previews the debut of NXT UK’s Oro Mensah, who was previously known as Oliver Carter.

Grayson Waller joins McKenzie Mitchell in the announcement of the final four vote getters in “the biggest star of NXT 2.0” award: Toxic Attraction, Carmelo Hayes, Nikkita Lyons, and Bron Breakker. “You don’t know what talent is!” correctly argues Waller, who was somehow robbed in place of Lyons.

Entering without music or ring gear is Walker, who is presented as simply a NXT 2.0 security guard and “developmental prospect.” Walker has the crowd behind him, and with a big cross body, he gains the victory over his loudmouth rival.

In retrospect, NXT 2.0 has featured some cool special entrances, and a montage highlights some past clips. The king of special entrances Carmelo Hayes makes a smug remark about Wes Lee’s injury before heading to the ring.

A vignette showcases newcomer Sol Ruca, who – from what was shown, surfs on the beach. “When I get to NXT, I can promise the women’s division it won’t be another day at the beach.”

Without a doubt, the fan-voted “biggest superstar of NXT 2.0” is NXT Champion Bron Breakker. Although the North American Champion is certainly a close second.

“We are too good to be this humble,” says Trick Williams and Hayes before dissing an injured Wes Lee. But taking his place is the newest member of The Bloodline and fan favorite Sikoa, who says, “I got next,” coming full circle with his feud against Hayes. Sikoa reigns in control until Williams discreetly attacks his braced left knee, but the “Street Champ” recuperates with a corner hip attack and Samoan Drop for two. Sikoa takes out Williams, delivers a Uranage, and hits a finishing top-rope splash to win the North American Championship – adding to the gold collection of The Bloodline.

Shawn Michaels narrates the final segment of NXT 2.0’s anniversary episode: “NXT is constantly evolving with a focus on the future. Superstars develop and move on, but our message to our passionate fans remains the same. We are NXT.”

It was awesome to reflect on the year NXT 2.0 has had, and the brand has come a long way. It’s found its groove under Shawn Michaels, and the young talent are really prospering. Tonight’s episode only had two standout matches, which featured breakouts in the Creed Brothers and Carmelo Hayes. Tough seeing Hayes’ reign fall for the sake of The Bloodline but having the North American Championship on Smackdown will be interesting.