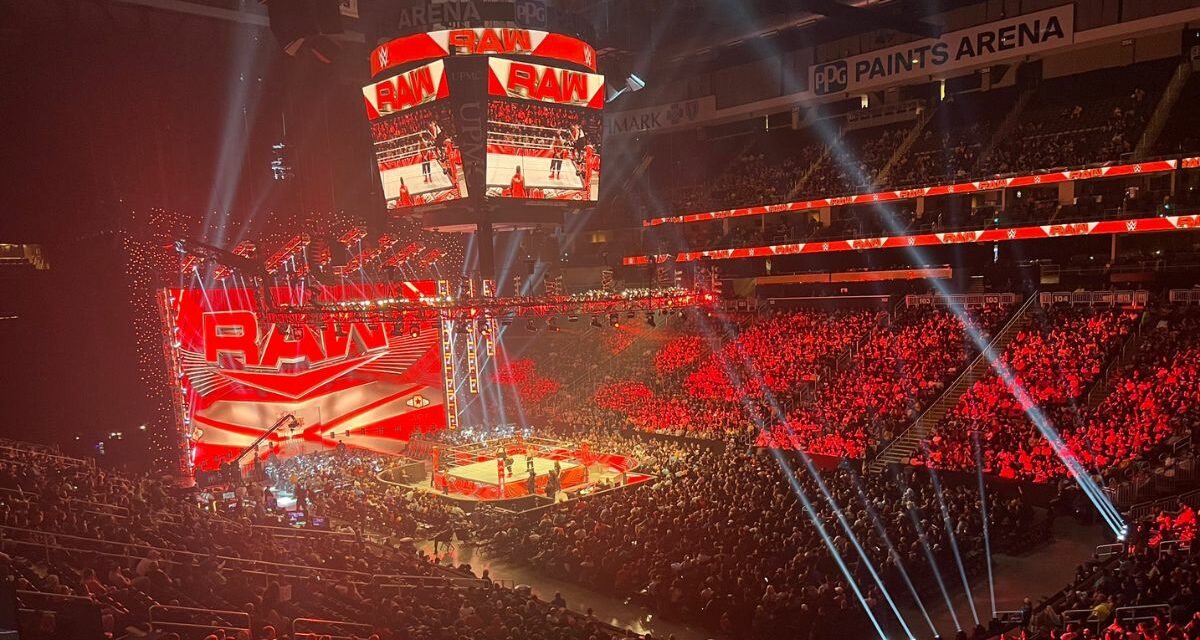 PITTSBURGH – Much had been made about Kurt Angle’s triumphant return to Monday Night RAW. The one-time Olympic Champion and WWE Hall of Famer most recently had been seen throwing out the first pitch at an Altoona Curve baseball game before the independent group there had an outing.

As is usual, fans wondered what the retired icon might do at PPG Paints Arena. One report had him drinking milk with the Street Profits. Another mused Alpha Academy run-in.

But before all of that, there was the pomp and circumstance of the first “post Vince” edition of Monday Night Raw in Pittsburgh.

One thing unique about Pittsburgh wrestling fans is they don’t come late for WWE events. At 8 p.m., there are only dozens of fans roaming the expansive ice hockey arena and home of the Pittsburgh Penguins. And right off the bat, they were cheering for Dolph Ziggler and A.J. Styles and solidly against Damien Priest and Finn Balor’s Judgement Day.

Their cohort, Rhea Ripley, really shined here, agonizing over every setback and enjoying every advance. At last year’s December’s WWE Holiday house show, she had to be pulled away from fans and she wouldn’t go easily. Fast forward half a year and here she is the cheerleader in black tights.

Fade to commercial: A Steve Austin/Mick Foley taped promo always goes over well in Pittsburgh, especially with the city basically adopting the legendary Mankind. Spoiler: on a scale of 1-10, Foley says the pain of losing his ear in Germany was “a 4.”

The Edge/Judgement Day rivalry was appreciated by the crowd, especially with the Ripley Dominick Mysterio “romance.” Ripley is the best thing to happen with the rudderless Dominick since Mysterio got him the gig.

An ad break: WWE Event Shop promoted a “Yinzer 3:16” shirt. And with proof that Triple H and Shawn Michaels are back on top in the back, there was a “crotch chop” cam, in lieu of a more traditional Kiss Cam.

A super-rare 6-Woman tag match featured a trio of Pittsburgh wrestlers against Alexa Bliss, Asuka and Bianca Belair. But unlike AEW’s enhancement talent matches, the trio weren’t even introduced to the live crowd. It’s really unfortunate because they all travel extensively and have held regional titles. Dani Mo is the only wrestler not given a truncated name. The others–Katie Ark and “Kay” Sparks–are popular Pittsburgh talents. Dani Mo actually served as a valet before she took training and hit the road with her longtime boyfriend, Facade. Fun fact: Katie Arquette (she pretends to be David Arquette’s cousin and he has played along) is the gal who defeated Britt Baker for the belt she held in Western Pennsylvania for a while. “Kay” Sparks is Kayla Sparks, who is the least known locally. 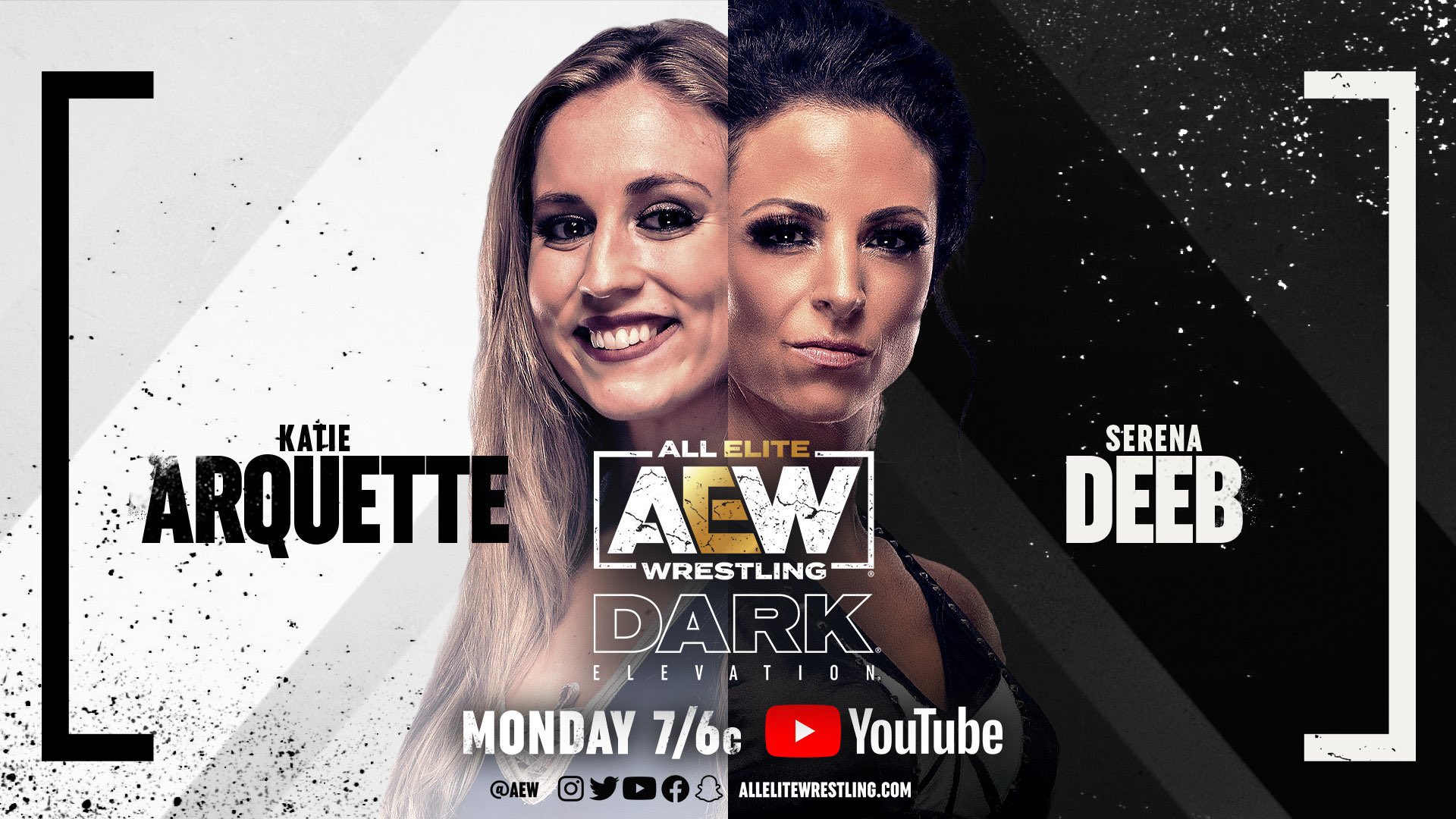 For those keeping track, Katie Arquette — Katie Ark — appeared on Monday Night Raw and AEW Dark on the same night, the first woman to do so. Cameron Stewart was the first wrestler to be on both shows when he was on NXT and AEW Dark on Sep. 21, 2021.

After the predictable ending, Asuka got the best reaction with her wonderful yammering. At this time a fan produced a pro-Naomi, anti-Sasha Banks sign at ringside. As Asuka talked, a security team member raced with laser-like precision through the crowd and grabbed the sign.

WWE Hall of Famer Kurt Angle received the hero’s welcome we all expected. As rumored, the Alpha Academy interrupted his pimping of Clash at the Castle. Not as much as the commercial break, but they have to sell inspiration.

Fans reacted expertly to Chad Gable’s sarcasm. Angle, who is lean and ripped, could have worked with Gable for years in the heyday. When Gable turned Otis toward Angle, the Street Profits came to the ring with much aplomb.

Another commercial break and the night’s first mass exodus to the break room.

With the Street Profits and Alpha Academy, the crowd was less interested than the matches before it. Fatigue might have been setting in before catching a second wind. Plus, with Angle at ringside, the hometown pop was on pause.

Otis, who some might kind of forget is still around, remains an imposing heel.

The athleticism is second-to-none in this contest and the crowd does get into it from time-to-time, especially when Gable crows.

For those counting at home, the top of the arena is tarped off, wrestler t-shirt and championship belt brandishing is down. A quick scan of the camera side of the crowd contains one guy with a Austin 3:16 tee and replica gold over his shoulder. Another is spotted later at ringside. There are lots of Pirates, Steelers and Penguins shirts and hats in the crowd. This is a change for a lot of WWE events, and one that should be addressed by the marketing squad.

Post-Match, the Street Profits wanted to share a drink with Angle, but he spat out the water they gave him. Luckily and without real reason (wink), there was a cooler of milk and Angle shared small, label-free bottles of the drink. As the cameras went elsewhere, Angle went to the crowd and pulled his daughter out of the first row. Earlier in the day, the two had posted a fun Instagram video about his return to RAW.

There’s a video of Penguins and Steelers (no last-place Pirates) players before cutting to defensive line leader Cam Heyward and other Steelers in the crowd. Heyward mimics John Cena’s “You Can’t See Me” as the fans cheer.

Interesting, commercial time is given to the Trish Stratus Peacock documentary and more Triple H footage from 1998.

Rollins and Riddle take personal shots at each other, and as a result, Riddle has never been more believable. The fans eat it up.

The fans love Lashley, but the reaction to The Miz is underwhelming compared to previous visits. He is legitimately from Cleveland and Pittsburgh fans had opposed with much more zeal in the past.

Ageless, Lashley imposes over both Miz and Ciampa. As for the match itself, one can hear conversations on the floor halfway up the bowl. It’s later discovered that suite patrons could also hear those far-off talks.

Miz and Ciampa are good, glittery foes for Lashley.

Throughout the match, chants about Miz’s genitals spurt for a few seconds. With Lashley down, there’s only one time in which it’s truly audible through the arena.

A quick Dexter Lumis appearance is at the very top of this day’s seating. That’s enough to make a difference in the final outcome.

Edge and Angle have a silly bit backstage which leads into the Mysterios talking about Clash at the Castle.

Quick note: the television production is doing a better job of having lengthy ad breaks without talent just existing in a darkened ring.

A recap of Connor’s Cure and its cancer foundation is received warmly. There’s a pop for Titus O’Neil who is shown sitting with grant recipients and Dana Warrior. Once the cameras cut to the emerging Usos, O’Neil hugs kids and is gone in a flash.

Kevin Owens does a fine job addressing Sami Zayne and the fans enjoy both men. Then, as soon as a challenge is made, a commercial hits and the talent exists in and around the ring. Side note: I had no idea Owens was a babyface now.

Kevin Owens and Jey Uso put on the hardest hitting match of the night. At the past Christmas House Show, Owens was a delightful heel, screaming at full throat while in a wrist lock. When inspired, Owens is a master.

There was a confusing moment where a backstage microphone must have been hot and a woman’s voice could be heard…ever so briefly. Everyone in the arena, talent and audience alike, just looked at each other for a second.

The dynamic between Owens and Zayn is perfect.

After this, a large portion of the crowd calls it a night. Most children returned to school this week, and while there weren’t a large contingent of kids in the crowd, many schoolers and responsible parents bid adieu at 10:30.

The final 30 minutes consisted of a previously-taped Theory and Johnny Gargano segment, a ton of advertisements, and the Finals of the Women’s Tag Team Title Tournament. Aliyah and Raquel Rodriguez vs. Dakota Kai and Iyo Sky with Bayley. The fans were respectful throughout this match. It should be noted that a few years ago, Sasha Banks (despite that guy’s sign) was one of the biggest fan favorites on the roster.

Unlike Edge in Toronto last week, there were no gangbuster announcements, just a brawl between Riddle and Rollins that saw “The Architect” eat an RKO.