SmackDown: Reigns softens up McIntyre ahead of The Clash 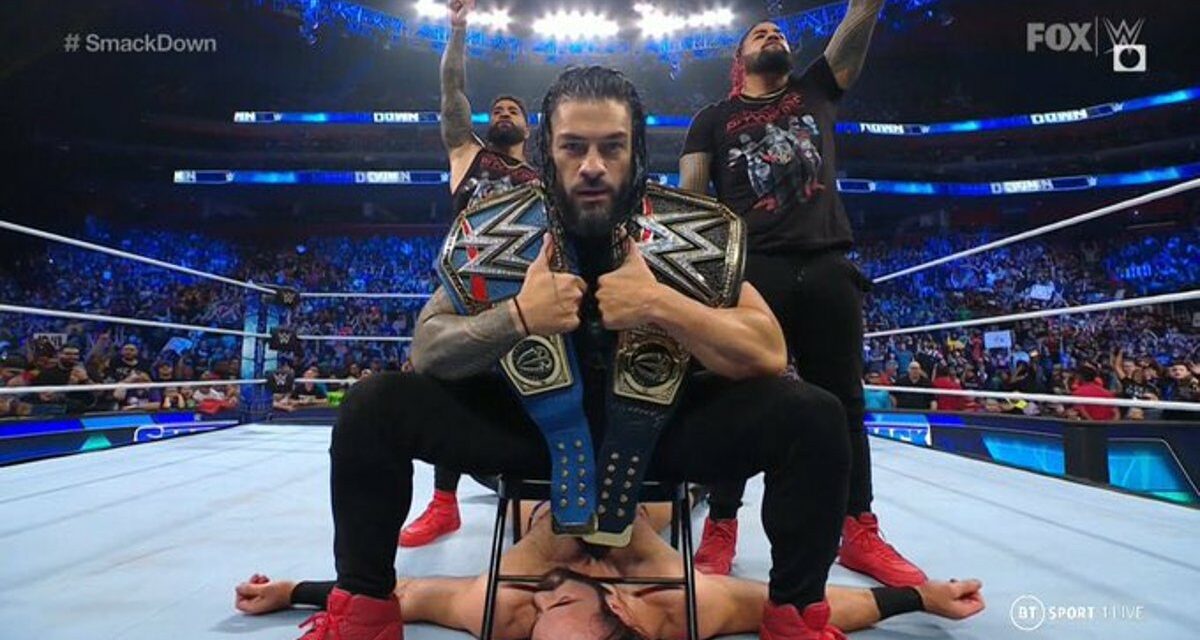 We are one week away from Clash at the Castle and I’m pumped. This is an event you wouldn’t want to miss, just like SummerSlam.

Tonight, we’re up for an amazing series of sweaty fighting and spiteful remarks. Ah, don’t you just love it when they get mad sometimes? Or is it just my weird ass?

Enough about that, and let’s get down to war. The less bloody and overwhelming one.

The match I have been waiting for. To see Corbin’s further downfall from being Happy to Saggy. Ha! Ha!

Anyway, the bell rings and Corbin goes straight for Rico, yet he quickly sends Happy outside the ring to regroup.

Michael Cole has been asking: What’s wrong with Happy Corbin?

A losing streak is what happened to him. He looks so angry and whiny all the time. It’s irritating, really.

Rico flips himself over the ropes and gets ready to jump Corbin only to receive a hard right to the jaw. Ricochet manages to shake that off with a baseball slide to Corbin, but Happy sends him into the ring post.

Because of that, Ricochet takes a harsher fight to Corbin with a quick dodge sending Corbin flying out of the ring. Happy surprises Rico with a violent plummet to the announcement table and slamming him against the barricades.

Whatever Corbin is feeling he’s uses it by turning Ricochet inside out once again to the post. Ricochet does turn it around by countering Happy’s End of Days with a DDT.

Corbin performs his Deep Six thinking it would land him the win but Rico kicks out just in time.

Ricochet gets a boot to the face. One kick, and another and another by Rico before he climbs the top rope and lands a Shooting Star for the win.

After the match, Pat McAfee takes a jab at Corbin losing again. He’s a “losing bald bum” and at the same time it’s mega sad how far he’s fallen. I’m happy I was right.

Clips of Drew McIntyre’s career were shown in a packaged segment.

He admits is life spiraled out of control after his mom got sick and he was fired. The bright side of it is that he found it to be a good thing. He was impulsive and “such a boy” when he arrived to America. This gave him the chance to reanalyze and rethink on a few things, become a man.

It helped him, and he came back stronger and wiser then he was prior. It’s hard to admit to your own wrongdoings but when you do it shows you try more than those who don’t.

What occurred after that was a shocking appearance by Karrion Kross and Scarlett. Kross reminds McIntyre that regardless of his efforts, it won’t matter when could face Kross soon. Tick tick tock.

The participants are: Dana Brooke and Tamina. Sonya Deville and Natalya. Xia Li and Shotzi. Nikki A.S.H. and Doudrop.

Tamina and Sonya were in the ring first but Tam was upset with Nattie so she Super Kicks Natalya in the face before being hit upon herself. They were former tag team partners after all.

Xia Li uses the ropes to her advantage as Nikki A.S.H. bounces off them. Li enlists help from her partner, Shotzi, to use Xia’s back as a stepping stone and smash Nikki for an unsuccessful cover due to Tamina’s break up.

Dana Brooke planted a boot to Niki’s face yet A.S.H. quickly turns it into a neck breaker for a cover. Sonya comes in with a running knee then she receives a Super Kick by Tamina, who moments later gets cross-bodied by Doudrop.

Xia and Shotzi work together just as Shotzi has Doudrop in a neck lock.

Nattie comes back into the frame with two wicked clotheslines to Li and Shotzi before she gets smashed by Brooke.

Sonya looks to capitalize when she tags herself in, but since Nikki was too occupied trying to take out Brooke, Dana counters and they both land on the other competitors. Deville takes her opportunity to cover Nikki for the win. Smart, I have to say. Real smart.

Sheamus and Gunther have their face to face in the middle of the ring.

Ahile Sheamus regals us with how he will beat and break Gunther during that match. Butch still behaves like a rabid animal leaving Holland to control him or rather, hold him back. When is that going to stop?

Once Gunther shows up Sheamus makes fun of Ludwig Kaiser’s voice saying that no one understands what he’s saying, which was hilarious. I wasn’t the only one laughing, so was Cole and McAfee. Ha! Ha! Ha!

But what was even more amusing is that while Sheamus and Gunther were having a standoff staring each other down Butch couldn’t or wouldn’t hold himself back anymore so he lunges at Kaiser and they start brawling. Ridge did help. A bit.

Bayley joins Michael Cole and Pat McAfee accompanied by Iyo Sky and Dakota Kai for the next matchup in the women’s division.

Backstage, Sami has a chat with the Tribal Chief about his upcoming match with McIntyre. Jey actually seems calm, this time anyway, about Zayn’s loss last week due to his injury. I’m in awe. Never thought that would happen. Anyway, Reigns encourages Zayn to deal with this battle on his own rather than have the entire Bloodline implicated.

What Roman really said, ladies and gentlemen, is “Boy, you better not be asking me to assist your sorry ass. You have legs and arms, use ‘em!” according to me.

Aliyah has Nattie in a chokehold using the strength of her legs to tighten her grip but it doesn’t take long for Natalya to untangle herself and kips up. Aliyah follows with one of her own as a sign of intimidation.

There was a bit of back and forth between the ropes from these two women until Aliyah shocks me as she dodges a swinging fist by bending backwards into a human bridge and then brings Nattie into a roll up that ultimately fails.

Aliyah tags Raquel and she shoulder tackles Nattie then attempts a cover but she’s swiftly stopped by Sonya who is immediately thrown out by Aliyah.

Raquel slam Natalya on the mat then she swings Deville over her shoulder and drops her as well like the powerhouse she is. Around that time, Aliyah disappeared. Bayley thinks she’s still hurting from Monday’s match. Raquel realizes she has to do this alone.

Rodriguez splashes Nattie and delivers a spinning corkscrew elbow to Sonya. Rodriguez has Deville up in the air for a Tahana Bomb yet Nattie materializes and goes for a Sharpshooter which gets countered with Nattie being tossed out of the ring. Sonya rushes in with a running knee to Raquel’s face.

Rodriguez gathers whatever energy she has left for a great Tahana Bomb for the win.

Bayley finds it convenient that Aliyah wasn’t there to help Raquel towards the end of the fight, that she abruptly showed up after the win. I found that weird too, I’m not gonna lie, but I won’t say anymore. Otherwise, we’d be here for an hour. I have a noisy mouth when it matters.

Maxxine and Max Dupri are having a photoshoot backstage with their models when suddenly Hit Row it seems is blasting their music from a trailer close by. So, Maxxine has an idea to spray paint the vehicle. Lo and behold, it belongs to The Street Profits. Yikes!

New Day are here tonight after the symbolic funeral The Viking Raiders held last week. Xavier Woods, who is in a wheelchair, mentions that they underestimated the Raiders’ power. Kofi Kingston says he got his ribs cracked by Ivar’s tremendous weight. Ouch!

Although that realization was heartwarming, the Raiders appear. Woods and Kingston were setting a trap with kendo sticks and the Vikings fell for it. They get swatted by the New Day.

Well, boo hoo. That’s The New Day for you. Hey, that somewhat rhymed.

Speaking of annihilation, Shayna Baszler. That says everything, no? She’s so brutal and talented at what she does that I know I’m slightly scared of her. She takes pleasure in breaking people’s body parts, mind you. Strangely enough, I still like her. Do you think I can get her to teach me?

This isn’t a match only to redeem himself on his loss last week, but Sami needs to prove that he can pull his weight in The Bloodline. Jey got mad when he became aware that Zayn was talking about him behind his back in the locker room. Bad choice, my guy. Now Jey is angry.

Well, as the match in underway between Zayn and McIntyre, which is something I didn’t think was going to happen again. Sami uses his… uh, brain, his tactics to deliver a kick to McIntyre’s jaw and a few hard punches to the head. Drew stops the onslaught fast and throws it at Sami as he bangs his head on the announcers’ table and his spine on the apron.

Was I the only one who felt perplexed when Sami put his finger in the air, showing “We the Ones” like the Usos do? If only you could’ve seen my face… Drew does launch him into the turnbuckles and gives one hell of a back breaker as repayment for us all. Well, for me specifically.

Sami is in trouble as McIntyre prepares for a Claymore. I thought they weren’t going to help, admirably the Usos ran out to distract Drew long enough for Zayn to deliver a Blue Thunderbomb, but… that didn’t do it.

Sami gets a small assist from the Usos while they are pounded away by McIntyre, so Zayn could roll him up, which he soon counters and brings Sami into Claymore Country for the win.

Roman slides into the ring to attack McIntyre. McIntyre dodges and Roman is sent into a post shoulder-first.

The twins come in against McIntyre, 2-on-1. Drew manages to push them back before getting speared by Roman from behind.

While Drew is down, the Usos bring steel chairs into this trussle and beat McIntyre with them. Roman shouts in McIntyre’s face that he won’t give up his mountain before he is finished with it before placing Drew into a guillotine submission and dumping him like you would a pair of crocks. I think he passed out at some point.

Roman takes a seat on the chair he neatly arranged on top of Drew proving once again, We the Ones!