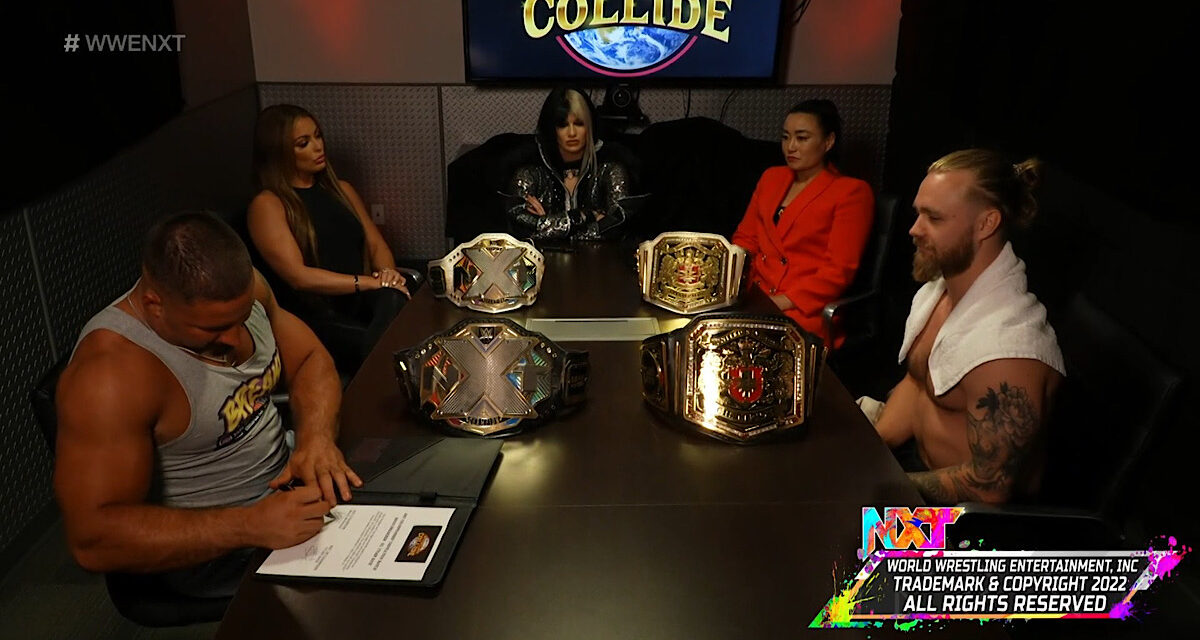 With the closing of NXT UK comes the involvement of numerous names such as Tyler Bate, Gallus, and Meiko Satomura to NXT in the United States, giving this brand a much-needed injection of excitement. But with the appearance of decorated new faces, the homegrowns of Orlando have stepped up and stood ground heading into a new era for the promotion.

“Orlando, where my dawgs at?” opened NXT Champion Bron Breakker before goading NXT UK Champion Bate into the ring. The competitors exchanged verbal assaults but ultimately agreed upon a main-event bout set for September 4: a championship unification match at NXT Worlds Collide.

A vignette for Gallus highlights their modus operandi in NXT UK – plus last week’s attack on Diamond Mine, which hints at a second unification match. Cameras cut backstage to the champions hauling away Fallon Henley from an argument with Lash Legend before commercial break. With Joe Coffey ringside, Mark Coffey and Wolfgang take control until Briggs forces them to regroup preceding picture-in-picture, and the latter makes another comeback thereafter. Out comes Legend to attack Henley with Pretty Deadly by the former’s side. The duo brawls with Briggs and Jensen to the back – to which the referee doesn’t immediately disqualify but instead resumes a count-out. Gallus is announced victorious, but Diamond Mine blindsides them for revenge. Commentary explains that “championships can’t change hands on a count-out,” but the result wouldn’t have changed by disqualification anyhow. This could’ve been so simple.

After discovering him at a Chase University overseas field trip, Andre Chase introduces Charlie Dempsey – son of William Regal – to his wrestling class. Dempsey stretches out the students too roughly, and Chase sternly sends him away. “Your class is too soft. If you all want homework, google Billy Robinson,” says Dempsey. The fiery eyes, the smug look – this kid is regal through and through.

It’s the premiere of the Grayson Waller Effect, a new in-ring talk show with arguably the best choice of host. He flamboyantly introduces special guest Apollo Crews and asks, “Didn’t you used to have an accent?” But Crews confidently responds, connecting his past with his future – “still a Nigerian warrior.” Waller presses Crews about his mysterious powers, but the latter retaliates: “How does it feel to be a low-budget version of The Miz?” That seems to be a popular comeback these days. Crews ultimately delivers a punch he describes as “the Apollo Crews effect,” capping a very successful talk show segment that should continue as a mainstay.

Pretty Deadly talks smack to Gallus, who are held back by security. It was Pretty Deadly who ended Gallus’ long reign as NXT UK Tag Team Champions, and the bad blood hasn’t dried.

“The first ever and now current NXT UK Champion” Tyler Bate presents an introductory vignette, but he’s no stranger to NXT in the United States. Look to his matches against Pete Dunne or the Undisputed ERA for some amazing reference.

Von Wagner and Mr. Stone are interviewed backstage about Bate, the former’s opponent tonight. “Tyler Bate won’t make it to Worlds Collide,” says Wagner, who should really let Stone do the talking – because what is he here for otherwise?

“What a prick,” some security guard said about Bernal after the competitor boasted in a pre-tape. Atop the ringside podium is The Schism, who have been pressuring Grimes to join them like a Jehovah’s Witness group. It’s Bernal’s television debut, and it’s less than smooth – face planting on a back body drop, for example. But Grimes puts it away with The Cave In, staring right into the eyes of Joe Gacy.

A vignette plays for Blair Davenport, whose NXT debut “is coming up imminently” according to Wade Barrett. Former NXT UK Women’s Champion Alba Fyre gets a vignette too, but she’s quite honestly ready for the big time; Clash at the Castle is right around the corner, isn’t it?

This match spawned from Davenport’s rude introduction last week, where she ripped up Hartwell’s letter from her husband – who happens to be a serial kidnapper. Hartwell attempts a comeback, but Davenport stifles it with an awkward slam for three. Post-match, she follows with a knee strike and grabs a microphone: “Blair Davenport is the rightful heir to the Women’s Championship.”

The NXT Women’s Champion Mandy Rose enters the ring to a hero’s welcome. “Put some respect on my name,” she says before NXT UK Women’s Champion Meiko Satomura appears – “the most respected woman in this industry,” states commentary. “The number one contender” Davenport pushes in, and Satomura obliges: “Triple threat match!”

Tiffany Stratton is interviewed backstage about her Lights Out match, but she looks ahead to the unified NXT Women’s Championship.

Tony D’Angelo lets bygones be bygones with Legado del Fantasma, who are bummed about the banishment of leader Santos Escobar. At this rate, Escobar could be showing up any Monday or Friday now.

“Rehabilitation is as important as preparation,” says last week’s loser JD McDonagh. With sights still set on NXT Champion Bron Breakker, he hangs upside down like a psychopath.

“No, I don’t like that,” Wes Lee comments about McDonagh’s promo package. He’s conversing with NXT Women’s Tag Team Champion Kayden Carter and Katana Chance, who are willing to take on all challengers.

Indi Hartwell is still ringside: “So this is what rock bottom feels like.” She blames herself for her shortcomings, but from behind appears her returning husband Dexter Lumis. InDex is reunited, and what a pop! It’s Savage and Elizabeth if Savage was a serial kidnapper. Lumis sends a final gift before exiting the building to flashing police lights – an insane yet incredible image. “Goodbye Indi (for now). I love you forever,” his note reads.

Cora Jade is interviewed backstage about her win over Roxanne Perez. “Your little inflatable dolls don’t count,” she says towards Twitter users.

The Dyad vs Legado del Fantasma

Moving parts are fruitful as Tony D’Angelo, Channing “Stacks” Lorenzo, and Elketra Lopez of The Family accompany a reluctant Joaquin Wilde and Cruz Del Toro. Opposing them are Rip Fowler and Jagger Reed, The Dyad of The Schism, which is headed by Joe Gacy ringside. Inverse of previously, Cameron Grimes watches from atop the podium amidst his issues with The Schism. “None of that crap” former wrestling state champion D’Angelo says about Legado del Fantasma’s double dive. After some impressive manoeuvring, The Schism commences in a group hug, but Wilde makes the athletic comeback that moves Orlando to its feet. However, The Dyad gains the victory with their tag finisher, reminding everyone of their acumen despite the ridiculous makeover. “Stop crying, what are you crying about?” D’Angelo comedically berates Wilde.

A defeated Javier Bernal talks smack to a girl, but he’s approached by the standup security guard, who again calls him a prick.

Joaquin Wilde, Cruz Del Toro, and Elektra Lopez walk out to their notorious parking lot, where Santos Escobar is waiting. “You didn’t think I was gonna leave without you, did you? La familia stays together. So, you ready to go?” Driving away into the sunset is Legado del Fantasma, an NXT 2.0 staple graduating towards their main roster careers.

Diamond Mine is arguing in the locker room before Josh Briggs and Brooks Jensen interrupt. “Your opinion doesn’t hold as much weight around here as it used to,” says Julius Creed to Roderick Strong. Hashtag free Roddy, man.

Like a known iteration of the Lights Out match, there are no disqualifications or count-outs. The one difference is the “lights out” part is literal, as the arena lights are dimmed to a dark blue. Choo appears serious and “laser focused,” utilizing Stratton’s own tennis racket as a weapon – without the annoying mouthpiece. Following picture-in-picture, Choo avoids a beautiful moonsault and capitalizes with a brainbuster onto a chair. But Stratton recuperates with hair spray to the face and a powerbomb through a garbage can. Choo introduces a loaded sleeping bag that’s filled with Legos, and Stratton returns the favor with a slam into the blocks. Ringside, Choo foils Stratton’s make-up powder plan and sends her through a wooden bed before hitting her top-rope splash for three.

Without a doubt, in my mind, NXT 2.0’s best episode ever. There are so many things to highlight, but this entire write-up can cover, as the whole two hours provided great content. Some eventful introductions (including a new talk show) and bittersweet goodbyes capped with a surprisingly entertaining main event makes this an absolute win.