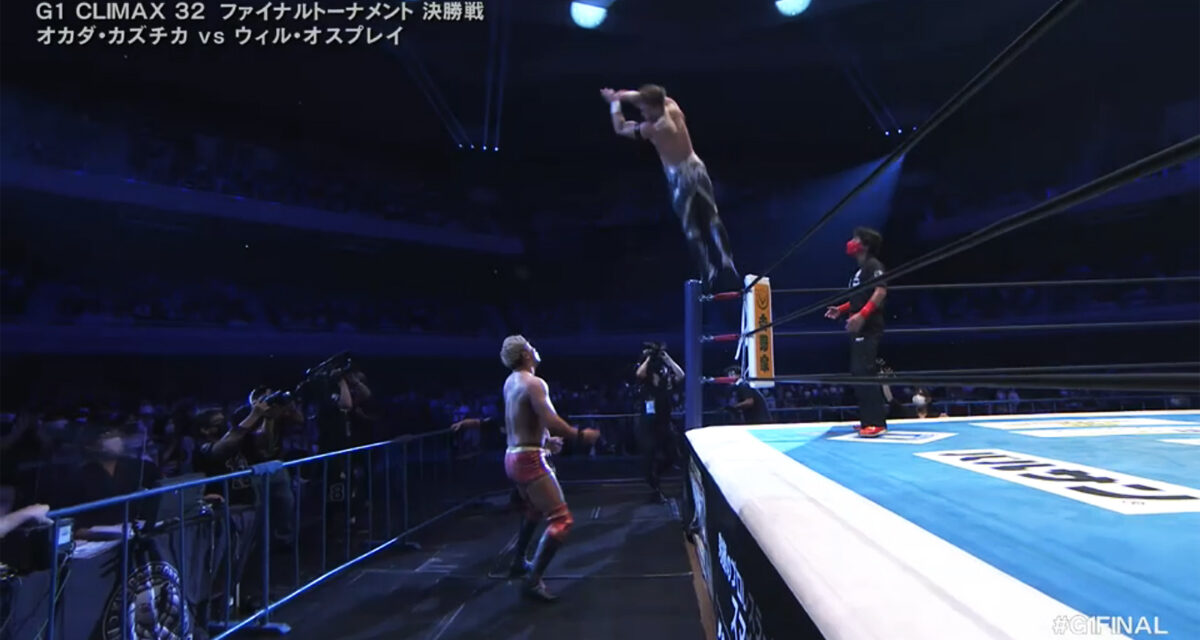 The 32nd edition of the G1 Climax Tournament has its winner. It was Will Ospreay against Kazuchika Okada in today’s finals.

World of Stardom Champion Syuri and Giulia were in attendance to present flowers to both Ospreay and Okada.

Ospreay went into the match with an injured neck and upper spine due to being piledriven into the concrete floor earlier on in the tournament. Heading into the match Ospreay has only one win over Okada.

Ospreay doesn’t break clean after their lock-up setting the tone of how he will be claiming any advantage he can to get the win. Okada returns the favour minutes later chopping Ospreay in the ropes. Okada catches Ospreay on the apron. He sweeps his legs. Ospreay crashes down smashing his head on the apron. Okada then DDTs him on the floor and that injured neck. As Ospreay tries to recover, Okada DDTs him on the floor for  a second time. 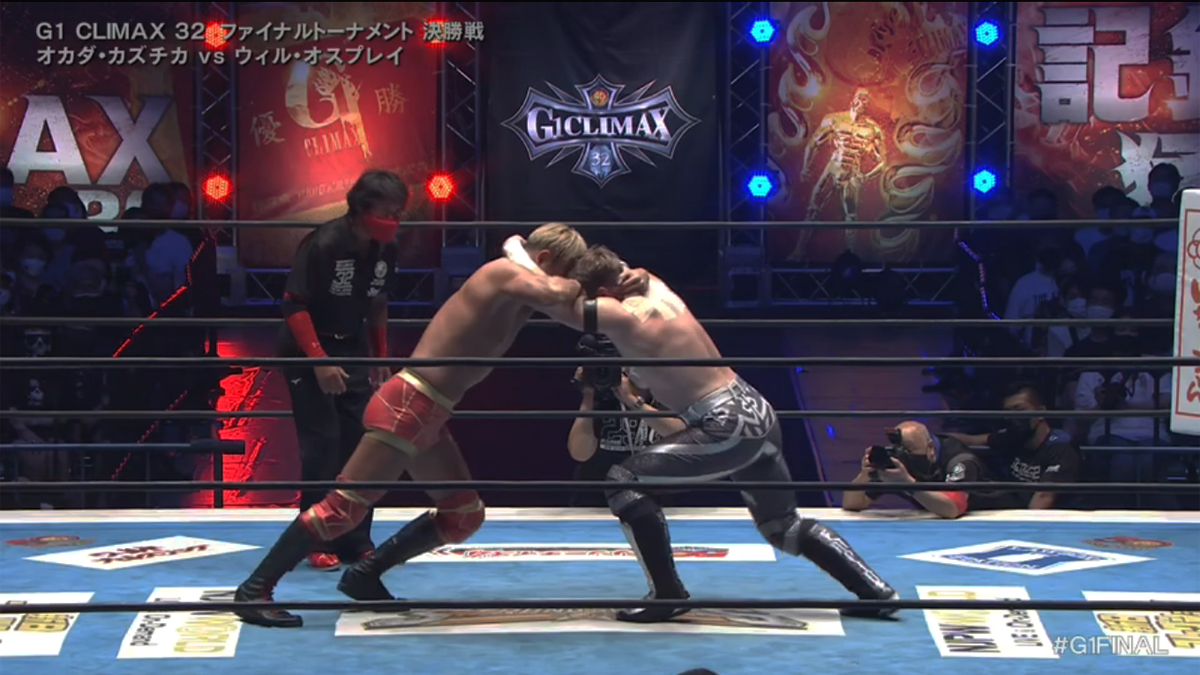 The finalists lock up. Courtesy: NJPW.

Okada continues attacking the spine and neck with a spinning neckbreaker in the ring. Okada cranks down on Ospreay with a rear neck lock. A frustrated Ospreay kicks at Okada. Okada lays some forearms across Ospreay’s back and neck. He returns to the rear chin lock. Okada dodges a run-in by Ospreay. Ospreay hits the turnbuckle with his neck. Okada follows up with a running elbow smash rocking Ospreay’s head. Ospreay reverses another DDT into a suplex. 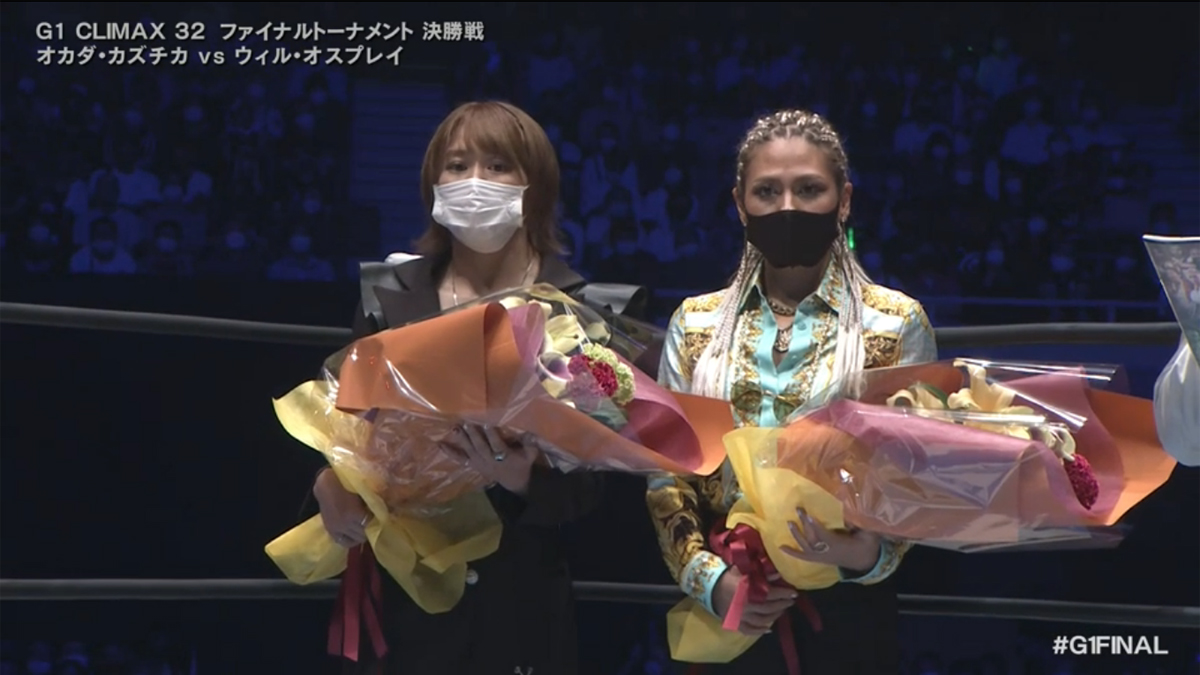 Ospreay delivers a Phenomenal Forearm but is slow to cover because of his neck. Ospreay drop kicks Okada off the top rope to the floor. Ospreay leaps off the top rope splashing Okada in a twisting, corkscrew dive. He dishes out some payback to Okada with an Oscutter off a ringside barricade. 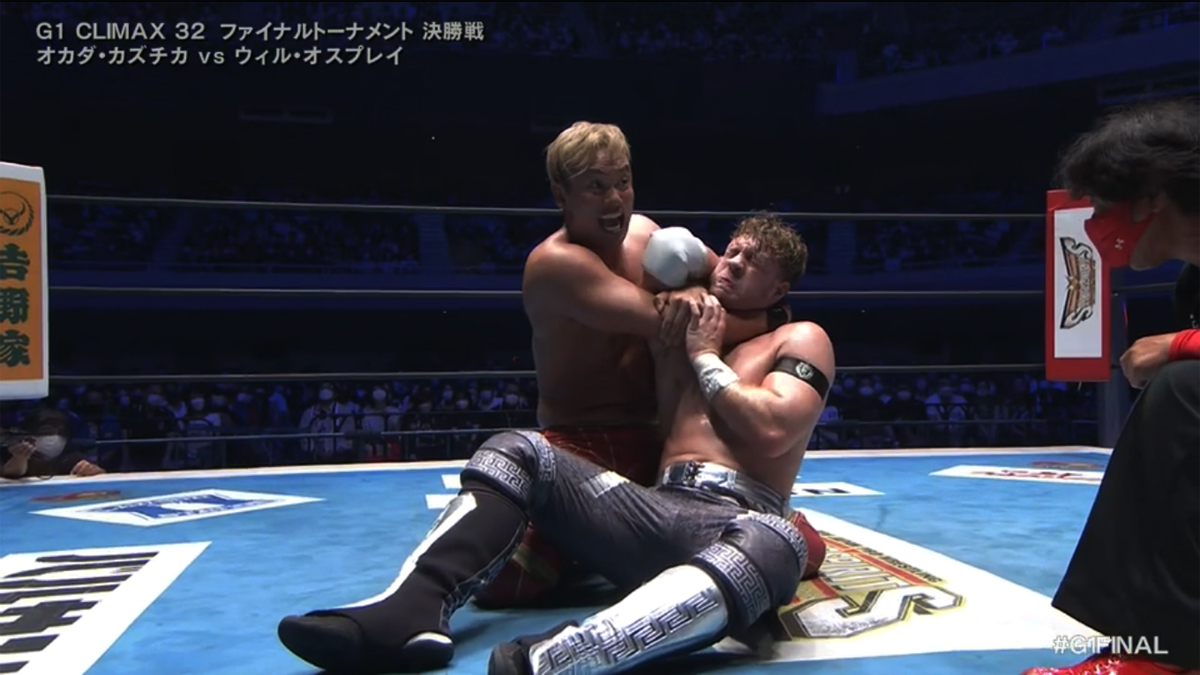 Okada goes on cruise control just damaging Ospreay’s neck with slams, submissions and a flying elbow smash. Okada whips Ospreay into a corner with incredible velocity. Ospreay bounces in and out of the corner. Official Red Shoes just shakes his head and asks Ospreay if he can go on. Ospreay refuses to give up. Ospreay attempts on OsCutter off the ropes. Okada drop kicks him out of mid-air.

Ospreay starts using the finishers of others who have beaten Okada. A High Fly Flow gets him a two count. A Style Clash gets him another two count. A Kenny Omega Knee Trigger stuns Okada. Okada flips a One-Winged Angel into a Landslide and a Rainmaker for a two count. Ospreay counters a Rainmaker with a Spanish Fly. As the two finalists get to their knees they engage in a slugfest. Okada catches Ospreay into a spinning slam and pins him with a Rainmaker. Okada has now won the G1 Climax four times. He was last year’s winner too. 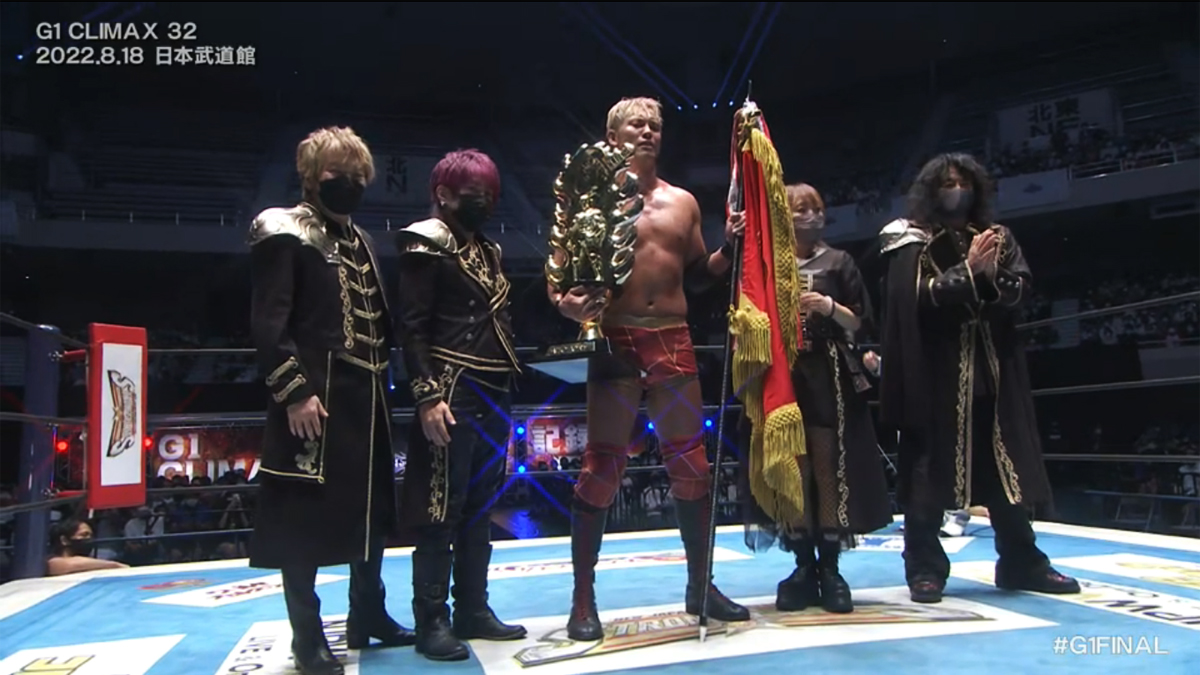 Okada is your winner. Courtesy: NJPW.

“Thanks for your hot support during a hot summer!” Okada told the crowd at the Nippon Budokan. “Ospreay, you were unbelievable. You can come as many times as you want. It will take more to beat me.” 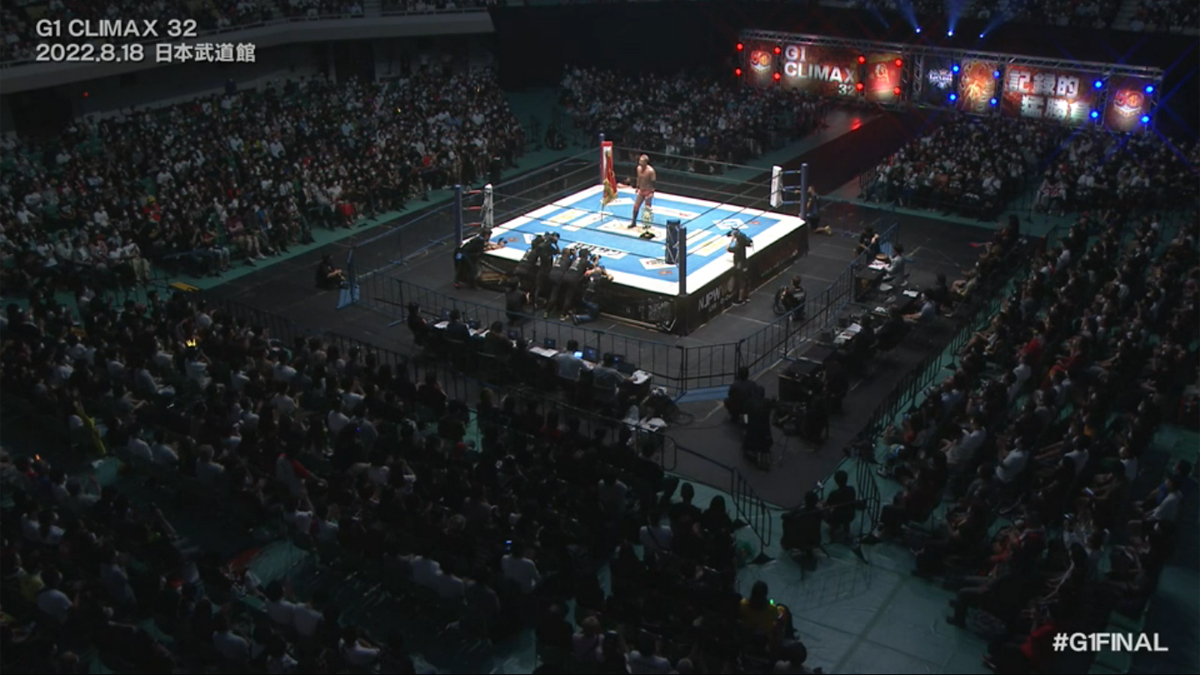 Okada thanks the fans. Courtesy: NJPW.

“Thanks for being a part of this month-long journey,” said Okada praising the fans of NJPW for still coming out to the live events during Japan’s continued struggle with the COVID pandemic.

Yujiro grabs his cane from outside the ring drawing the attention of the official. Togo chokes out Yoh. Yoh breaks free. Chaos beats the snot out of Togo. Yoh pins Togo with Direct Drive. Sho hits Yoh in the head with one of the NEVER Openweight 6-Man Tag Team Championship belts.

Jonah pins Isaacs with the Torpedo.

Cobb catches Robinson as he dives off the top rope. Cobb pins him with a Tour of the Islands. 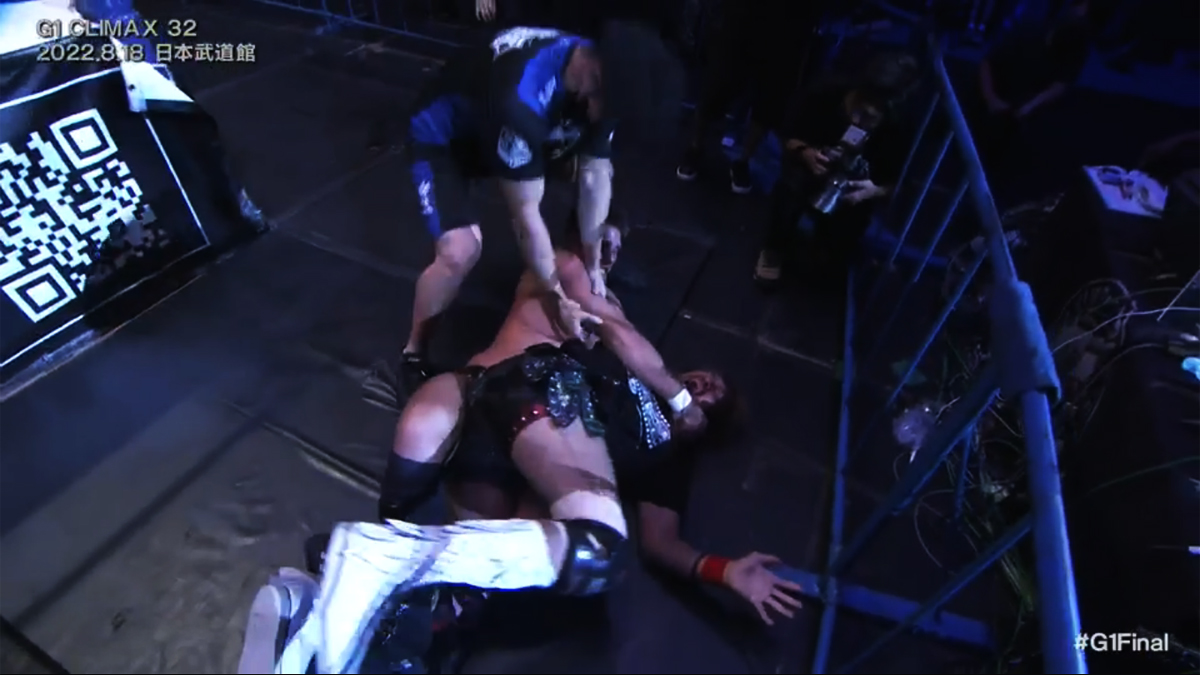 Archer chokeslams Bushi. He holds up Bushi for a Yokozuna Forearm Smash. Taichi pins Bushi. ZSJ locks a submission on Naito after the bell and decks a Young Lion.

Phantasmo shoves Takagi into the official. He punches him in the “lower abdomen” and pins him with a roll-up.

The Good Brothers have The Ace set up for the Magic Killer. Toru Yano appears at ringside and sprays his sanitizer into Gallows’ face. Gallows leaves the ring to chase after Yano. The Ace and Finlay double-team Anderson for the win.

Kushida pins Ishimori with a roll-up.