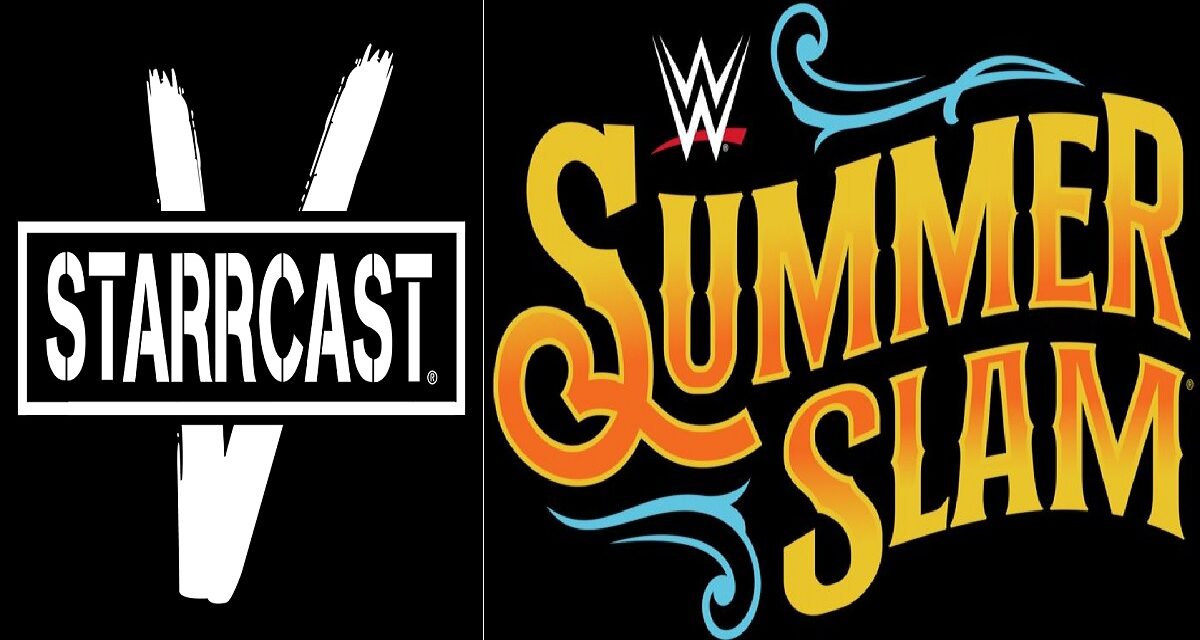 The difference in the types of wrestling fans in Nashville this weekend couldn’t have been clearer then by looking at the events that ran on Saturday.

At Starrcast, the weekend-long convention, which is being presented in conjunction with Sunday night’s “Ric Flair’s Last Match”, the fans tended to be die-hards. Fans who tend to eschew WWE’s product in favour of companies like AEW, ROH, GCW, New Japan, and Impact. Fans who know and like one of the featured guests Claudio Castagnoli by that name, and not as Cesaro. Fans who would have asked Kevin Sullivan or Billy Kidman for a picture or autograph if they’d have seen them in the airport on Saturday morning, unlike the more casual fans wearing the John Cena and Rey Mysterio shirts that didn’t even recognize either legend as they walked past them.

Those fans had a great time at Starrcast and wandered the Nashville Fairgrounds in delight, meeting their favourite stars, who happily posed for photos, signed figures, belts, and 8x10s. The lines were long at many of the tables, the buzz of excitement day increasing every time a new batch of stars came out for their signing session. 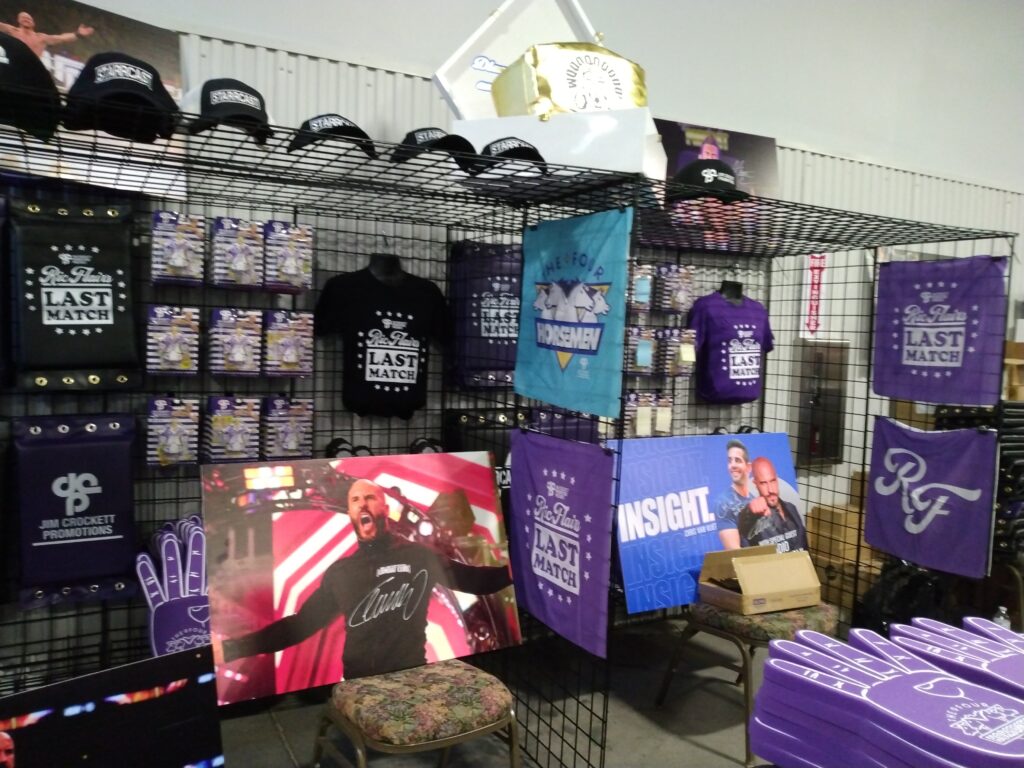 Nashville’s own Jeff Jarrett – who would appear on SummerSlam later that night, and will be one of Flair’s opponents on Sunday – was a huge draw at Starrcast and his table had long lines for his entire session. Ditto the Rock and Roll Express and other legends like Diamond Dallas Page. Other featured guests getting lots of love were Arn Anderson, Ron Simmons, and more modern stars Miro and Lana. Meanwhile, various other stars, many of whom will be on tomorrow’s undercard were also on hand, including AEW’s Orange Cassidy and Smart Mark Sterling, Impact World Champion Josh Alexander, former ROH Champ Johnathan Gresham, former WWE stars Kelly Kelly and Summer Rae, and “Cowboy” James Storm, among others.

Later that afternoon, a number of stars competed at a New Japan Pro-Wrestling show that saw several hundred of the faithful cheering on their favourites from that promotion, AEW, Impact, and MLW, as well as the independent circuit.

Based on a quick survey by this reporter, many of the fans at Starrcast had no interest whatsoever in attending WWE’ SummerSlam, taking place later that night a mere ten minutes drive away at the massive Nissan Stadium. And just less than a quarter of those asked didn’t even know it was taking place.

Contrast that with the crowd downtown who were there specifically to attend SummerSlam. There, in the hustle and bustle of the honky-tonk saloons, there was a sea of WWE fans of all ages, with plenty of them wearing the WWE brand, and more than a handful cosplaying their favourite Superstar or Hall of Famer.

In the venue itself – which was adorned with immense graphics that could be seen across the river, unlike the understated signs near the Starrcast venue that were mostly there to help drivers find the building – the lines were also very long. Not for autographs or meet and greets, but rather for the various merch kiosks littered throughout the building or the larger SummerSlam store. 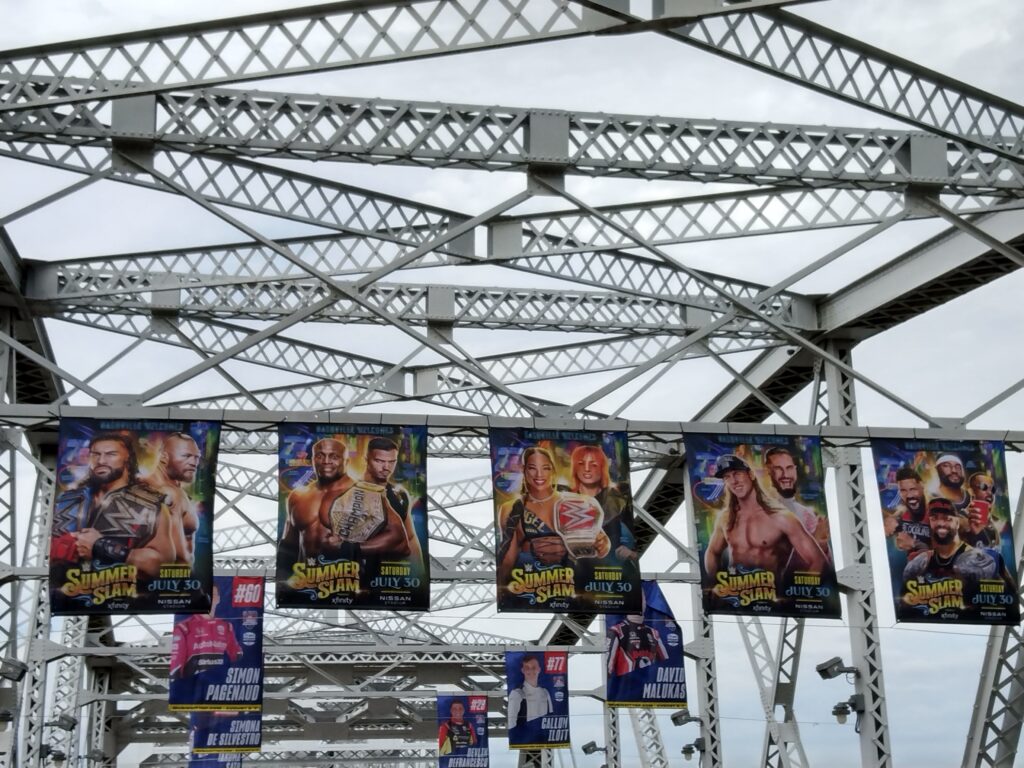 SummerSlam signs on the walking bridge to Nissan Stadium

But their support didn’t end with their wallets. Indeed, during the show, the WWE Universe roared their approval for the in-ring action. For the most part, the crowd was lively – popping for big moves, gasping at surprising kickouts, cheering for their heroes and booing the villains.

And while they may not have been able to get the exact same experience as the attendees of Starrcast, based on another informal survey, the WWE faithful seemed to have just as much fun.

There’s a metaphor that’s often used when talking about wrestling and the appreciation for its different styles. They say that some people like chocolate, some like vanilla. But in the end, it’s ice cream – and as long as people are able to get what they enjoy, and have fun eating it, then that’s a good thing.

In Nashville on Saturday, both of those flavours were available. And wrestling fans ate it up.