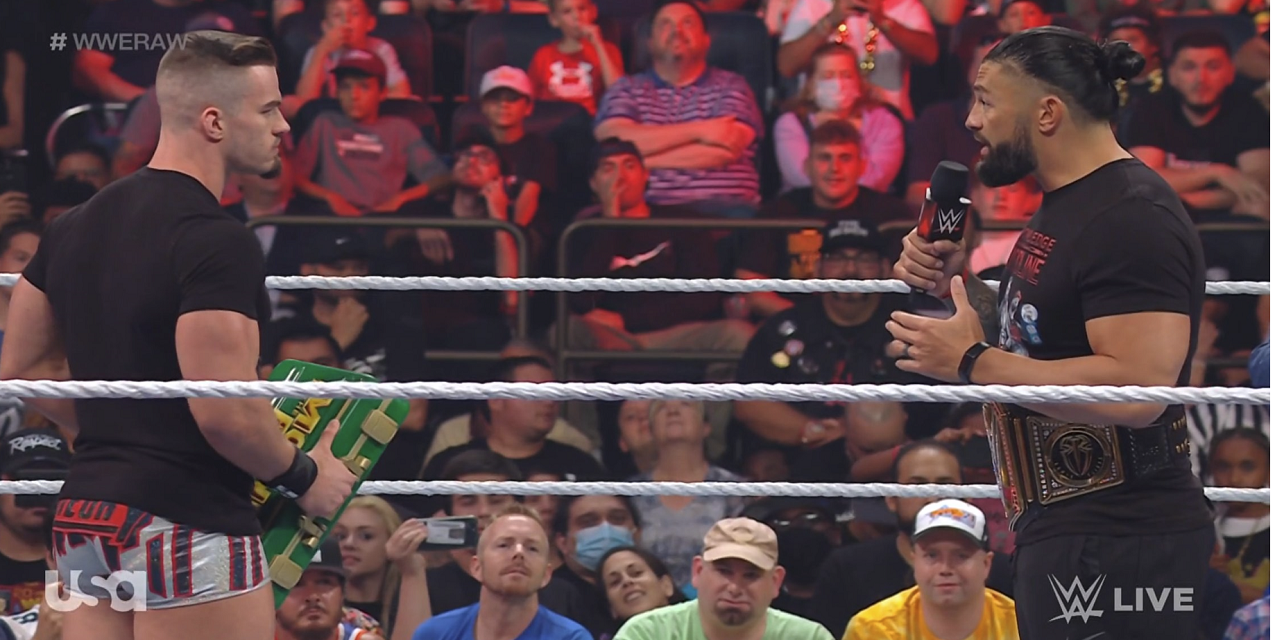 The show started without an intro and right in the middle of action as The Miz and Logan Paul are brawling with officials trying to pull them apart.

We get a recap of how the brawl started and the show kicks off to “regular” programming….

Roman Reigns, The Usos, and Paul Heyman come out to start the actual show. Reigns starts things off on the mic and tells MSG to acknowledge him. They did in fact do so as there were audible chants and pops from the crowd. The mic was cutting in and out a bit but Reigns mentioned that he didn’t want to speak anymore so he passed the mic to Paul Heyman.

The Mic was still having issues. Heyman said the sound guy must be from Jersey and said that they want his name so he can be the next person out the door. Heyman was able to continue his promo for the Bloodline and said that Sunday is 700 days of Reigns as the champion but he knew that Brock Lesnar wanted to end said reign. Heyman mentioned that Lesnar beat the best of the best including Randy Couture when he was the main guy in UFC, The Undertakers streak, and initiated John Cena to Suplex City.

Theory made is grand entrance for the night and essentially said that on Sunday he will regain his US Championship from Lashley and ultimately win the undisputed universal championship from Lesnar or Reigns. Reigns called Theory into the ring and Theory hesitated but eventually slowly made his way in but was clearly uneasy with the Usos and the Tribal Chief right there.

Reigns told Theory that he has no idea what to do with the briefcase and to really think about things because “Your Daddy’s not here anymore” which got some fun chants from the crowd. As the Bloodline was leaving the ring, Jey smacked Theory’s briefcase and then Theory hits him with it. Reigns had to hold Jey back and they eventually leave.

After the commercial break, Theory was still in the ring and was officially introduced to the MSG crowd. As he started talking he was interrupted by Drew McIntyre to kick off the first match of the night.

This match had some nice back and forth between the two men McIntyre chopped Theory a bit, Theory wanted to chop McIntyre but was stopped. Eventually McIntyre set up fro a Claymore but Sheamus, Ridge Holland, and Butch run in to attack McIntyre to cause a DQ

The match started during the break and was picked up as a result of the DQ. Lashley was taking a beating and eventually made the hot tag to McIntyre who hit Thoery with a sit-out spinebuster. Lashley tagged back in and gave Theory a chokeslam. Sheamus broke up the cover that came from that.

Theory set up for his finisher but got distracted by Dolh Ziggler who suddenly appeared at ringside. Lashley got out of the hold and applied the Hurt Lock to make Theory tap out quickly.

As Lashley and McIntyre were celebrating their win Theory was making his way to the back showing off his Money in the Bank briefcase with his back turned to the ramp….The Usos Superkicked Theory and Reings placed the case on his chest.

Rey and Dominik come out and we get a “Thank You Rey” chant from the MSG faithful. Rey said he had his first match at 14 years old and never thought he would ever preform in a WWE ring. He said that people his size were not part of the business back then but he broke the barriers. Rey thanks Dean Malenko, Konnab, Batista, Kurt Ngle, Edge, and Eddie Guerrero.

Rey thanked his family as the fans cheered for him more. Finn Balor and Damian Priest eventually came out as we go to commercial.

Rey got the hot tag and was heavily featured in this match. Rey hit Priest with a Springboard crossbody and kicks. Priest went or a Razor’s Edge but Rey countered with a hurricarana.

Balor made a blind tag and took advantage of Rey including hitting a Coup De Grace but Dominik broke the count. Balor went for the Eddie Chair trick but this was turned around after the ref was distracted and Balor ended up with the chair with Rey on the floor. Rey dropped Priest and Balor in 619 ready position which the Mysterio’s hit. Rey with a Frog Splash for the win.

After the match we are joined in the back where Rey’s celebration continued until Rhea Ripley just showed up. Aalyah told her to back off and all of this was a distraction as Judgement Day pulled Dominik out to lure Rey out of the room for a beating. Balor with the line of the night as he said “it’s not your anniversary, it’s my birthday!”

Bianca came out and as she started speaking Becky Lynch came out. Both women fought back and forth until WWE officials broke up the fight.

It's an absolute BRAWL on #WWERaw between @BeckyLynchWWE and @BiancaBelairWWE!

In the back Sarah Schrieber is with Alexa Bliss. Bliss said that she doesn’t blame Doudrop for challenging her to a match. She also claimed she doesn’t get her friendship with Nikki ASH.

Somewhere in the back, medical staff is checking on Rey Mysterio. Balor and Priest show up and Dominik chased them away. Ripley kicked Rey while he was down and wished him a happy anniversary.  Dominik came back to check on his dad.

Very short encounter. Bliss went for the twisted Bliss and was knocked off the top rope by Nikki. Bliss countered a powerslam and hit a DDT for the win.

Make no mistake, @DoudropWWE is a force to be reckoned with, but so is @AlexaBliss_WWE! #WWERaw pic.twitter.com/lsxVYlk16n

AJ Styles is with Logan Paul and said he liked what he did to The Miz earlier but he doesn’t know him too well. He told Logan to do everyone a favour and shut Miz up at SummerSlam

Paul said his brother would be fighting in MSG later in August but that is not tonight. tonight is the debut of “impaulsive TV”. The Miz was called out but Maryse came out. There were some obvious “ball jokes” which drew The Miz out from the back to defend his own honour. Paul made mention of The Miz’s balls and this resulted in a slap from Maryse. Paul said that Maryse clearly has bigger balls than The Miz. Ciampa tried to attack Paul but was fought off. Paul was eventually double teamed until Miz gave him a Skull Crushing Finale.

Street Profits are interviewed int he back along with The Usos and standing in between everyone is Jeff Jarrett. The teams have a usual war of words. Jarret warned everyone to keep the peace.

Before the match Gable told the crowd not to boo an Olympian and someone with a Master’s Degree who did it with a 4.0 GPA. He said that Styles and Ziggler weren’t a real team like the Ne York Knicks.

Another match that went through a commercial to make it seem shorter. Gable hit a Chaos Theory Suplex and tried to go for a moonsault but Ziggler dodged it and hit a superkick. Otis broke up the pin. Styles blocked a suplex from Gable, Ziggler hit a Zig-Zag for the win.

Match 6: Main Event: Roman Reigns and the Usos vs Riddle and The Street Profits

After a commercial, The Bloodline was in clear control of the match. Ford got the hot tag and yelled at Reigns to Acknowledge him. He toot out all members of The Bloodline but Reigns hit a Uranage to stop the face momentum.

Ford got worked over some more. Reigns knocked Dawkins off the apron to ensure Ford is cut off from his team some more. Ford was able to hit a blockbuster and tagged Riddle into the match. Riddle with Suplexes for all of the Bloodline. Riddle with a powerslam to Jimmy but Reigns tagegd himself in blindly and hit a Superman Punch to gain control of the match again.

Ford broke up the cover before it was too late. Jimy knocked Ford out with a Suicide Dive. Dawkins tackled both Usos into the barricade. Reigns dropped Dawkins onto the steel steps. Riddle and Reigns are now alone and Riddle hit Reigns with a draping DDT. Reigns blocked an RKO attmept and hit a spear for the win.

After the match Seth Rollin’s music hit as the Bloodline were leaving and had some looks with them. Rollins goes into the ring to attack Riddle. Rollins hit Riddle with the Steel Steps and stomped him on them also for good measure to end the show.