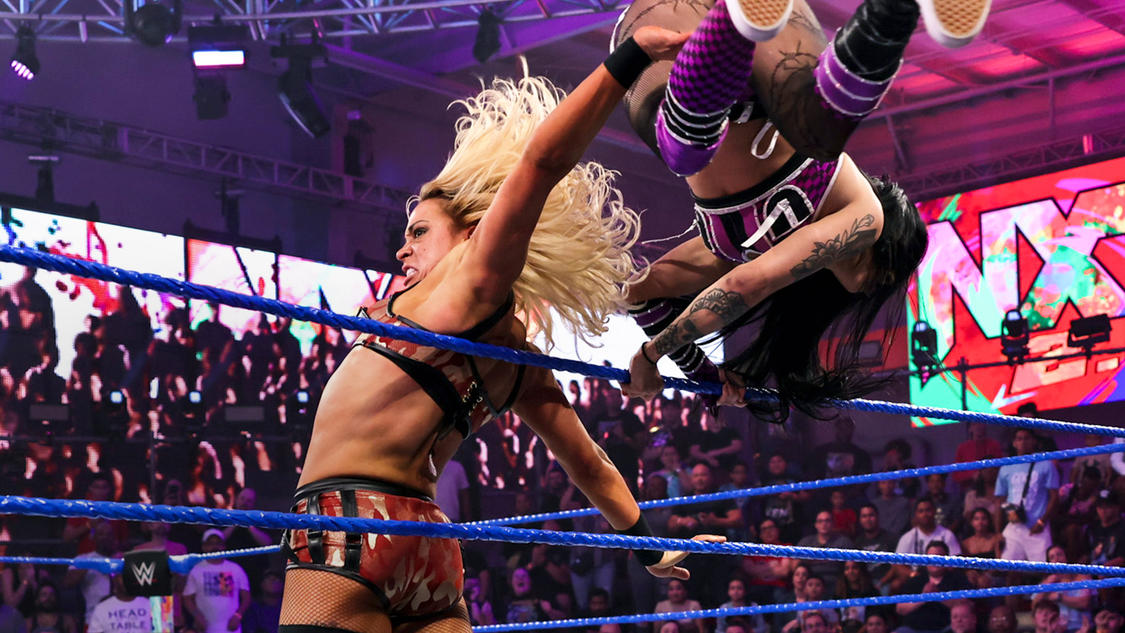 What is going on with women’s tag team titles in WWE right now? The main roster belts have completely disappeared and now on NXT the current champions have turned on each other. Cora Jade turned on her partner and best friend last week as Roxanne Perez was competing for the NXT women’s championship. What is happening? Well, maybe we will find out tonight.

Well, at least NXT starts the show off with match, unlike the two big shows. Will Grimes every get the main roster call up? Grimes is thrown off his game when he notices Joe Gacy watching from the atop the arena. I guess Cameron won’t be coming to the main roster anytime soon if he has issues with Gacy. Grimes gets his leg caught in the ropes and McDonagh doesn’t let up by putting the boots to him. JD hits the Devil Inside and covers to get the three count.

After the match, Gacy is seen just shaking his head and Grimes writhes in pain in the ring.

Nikkita Lyons is going to toss all 19 women over the top rope and Mandy Rose won’t be able to duck her anymore.

Tiffany Stratton can’t believe she has to compete in the Battle Royale tonight, she thinks she deserves the title shot right now.

Cora Jade heads to the ring to hopefully explain why she stabbed her best friend, Roxanne Perez, in the back. We all know she is heel now by telling the crowd to shut up. Jade calls herself the face of NXT and the fans are responsible for that. She wanted to bring her best friend along for the ride, but sounds like Cora got jealous over the reaction that Perez got. The straw that broke the camels back was when Roxanne cashed in her title shot on Mandy Rose just 30 minutes after winning the tag team titles. Jade accuses Perez of using her and calls her selfish. Jade admits to attacking Perez in the parking lot and was planning on taking her place in the match. Jade vows to win the Battle Royale. As for the tag team championship belt, well, she drops it in the trash. The true Cora Jade is here.

Xyon Quin says he has the X factor, unlike Apollo Crews. Next week will be his biggest moment when he beats Crews.

Indi Hartwell knows you can’t trust anyone, which is why she is going to win tonight.

So both of these guys are in Diamond Mine? So this is truly just an exhibition match? Tony D’Angelo pops up on the screen. The Diamonds are shining so bright. Tony and the boys are beating the tar out of the Creed Brothers. Off the distraction, Strong hits Kemp with a jumping knee and covers to get the pin.

Pretty Deadly talk how they are going to win back their NXT UK tag title tonight.

Brooks Jensen and Josh Briggs are fired up for their first title defense.

Backstage, Roderick Strong wants to know what is going on with the Creeds. He thinks they should have beaten the four men that jumped them. Then he rips into Kemp for taking so long to get to the back.

So Pretty Deadly is a better version of Breezango? They comes to the ring dressed in cowboy(ish) attire to make fun of their opponents. Pretty Deadly cuts corners and tries to cheat early in the match. Fallon takes an inadvertent shot and the champs are heated. Kit Wilson slips his partner one of the tag team belts to use on Briggs. Henley jumps to the apron and grabs the belt. Briggs and Jensen hit Wilson with the High Low and cover to get the pin.

Joe Gacy is with the Dyad. He has torn them down a built them back up. It is time for the two to emerge and final step will commence with the purification. Welcome Jagger Reid and Rip Fowler. Their pasts will stay being them. Gacy says these two and first but will not be the last to be unshackled.

Wes Lee tells Grayson Waller that next week he won’t have any excuses when he takes the L.

NXT Champion Bron Breaker makes his way to the ring. He has respect for Cameron Grimes for standing up to him, but he has no respect for JD McDonagh for attacking from behind. JD has his attention and will pay for what he did.

McDonagh pops up on the video screen. He calls Bron predictable and vows to dissect him in the ring. Cameron may have hurt him, but JD will disable the champ.

Diamond Mine is coming for Tony D’Angelo. When you attack one of the Mine you attack them all. Tony can either accept the challenge or be hunted down; wither way he’s catching a beating.

Axiom is making his debut. They are billing him as a real life super hero. Dante Chen is getting fed to him, tonight. After dropping Chen on the ropes, he hits flying cross body. Axiom with a drop kick to the jaw and covers to get the win.

Lash Legend calls herself the top woman in NXT.

Giovanni Vinci blows off a fan in the parking lot, but then gets parked in by the Chase U fan bus.

Carmelo Hayes and Trick Williams are in the Barber Shop this week. They talked about the business they need to take care of. They bring up how Wes Lee is obsessed with Trick.

Mandy Rose predicts that Tatum Paxley is going to win the Battle Royal. She only picked her because that was the first name to come to her mind. Ivy Nile let’s Mandy know that when she wins she will knock Rose out. Kiana James and Alba Fyre also threaten Rose.

Tony D’Angelo accepts the challenge of Diamond Mine; they haven’t fooled the Family.

Zoey Stark is back; she’s been out since November. Cora Jade slips out of the ring, but Ivy Nile gives chase. Literally, she chases Jade up the ramp; sending he sprinting to the back. I’ll be honest, I didn’t know NXT had a deep enough women’s division to have a 20 woman match. Wendy Chu saves herself by landing on her pillow. Her feet never hit the floor, so she rolls back into the ring. Tiffany Stratton finally eliminates Chu by hitting her with a cup on the apron. Tatum Paxton eliminates herself to save Ivy Nile from a beatdown on the floor from Katana Chance and Kayden Carter. Indi Hartwell gets eliminated on a low bridge from Stratton and we are down to four. Stratton, Stark, Nikkita Lyons and Kiana James.

Lyons kicks James across the ring, hits Stratton with a hip attack and tosses Stark across the ring. James runs into a spin kick and Lyons tosses her out of the ring. Stratton quickly gets behind Lyons and dumps her from the ring. Zoey lifts Stratton over the tope rope, but she is able to hold on. Stark strikes again, nearly getting the eliminaiton. Stratton gets caught in the corner trying to hit an elbow strike. Starks knocks Stratton to the floor. Stark thinks she has won, but the bell hasn’t rung. Cora Jade runs in, as she was never eliminated over the top rope. Stark ducks and backdrops Jade over the top to win.

The good news is there’s no way NXT could be as bad as RAW was last night. Tonight was fine. Zoey Stark returning from injury to win the Battle Royal was fun. There really wasn’t a must see match on the card, but the two story lines woven through out the show kept everything together. Will Cameron Grimes join the Joe Gacy movement? And will Diamond Mine make the D’Angelo Family pay for their attack? It was a nice to check in on these two story threads through out the show.