‘How to be a Mark’ doesn’t quite hit its mark 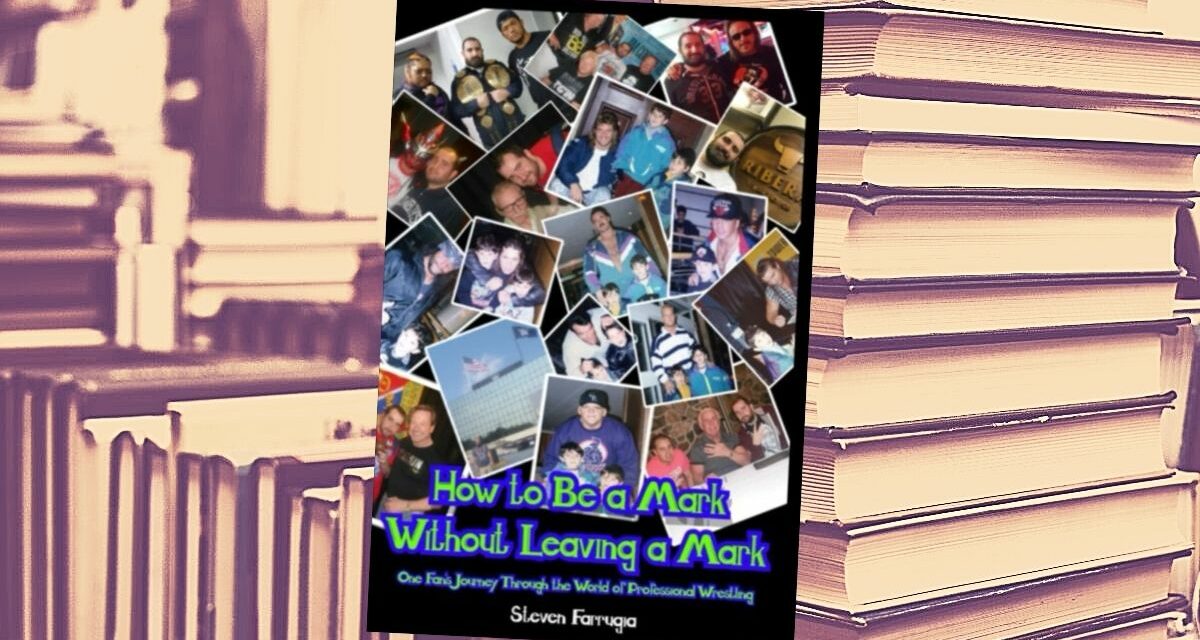 If you’re like me and will read pretty much anything, you fall into certain bad habits. One such habit starts when you read a book and realize that within that book there’s a tighter, possibly more interesting book struggling to get out.

That was the case with How to Be a Mark Without Leaving a Mark: One Fan’s Journey Through the World of Professional Wrestling.

Author Steven Farrugia wastes no time in sketching his most interesting idea out. A lifelong fan, he decided to write a book about wrestling about 15 years ago (and it’s a credit that he’s managed to do so, whatever the result). His original idea? “The 100 Greatest Champions in Wrestling History” as he states “from George Hackenschmidt’s first World title win up until modern day (circa 2006) Ring of Honor champions.”

Even better, Mr. Farrugia proposes some intellectual rigor to his approach in the form of a point system, giving different values for each reign, length of reign, differentiating between territorial and secondary belts, etc. It seems like a daunting task, and like most of wrestling fandom, perhaps a bit quixotic since as we all know, title reigns are bestowed by promoters and not truly earned by competitors. Still, as a chance to delve into which wrestlers have been most trusted to carry their promotions’ straps and the reasons why, it would have been a neat exercise. Going back to the territorial days, how does one grade Bruno Sammartino’s decade and a half on top, playing to largely immigrant audiences when WWWF was a regional promotion, against modern longer-term champions like Hulk Hogan or now Roman Reigns? How do you account for changes in booking philosophy — what does it say about long-term “good guy” champions turning away all comers vs. the current trend towards “bad guys” on top, with heroic faces challenging and the perception that there’s more money in the chase than the belt itself? How do you reconcile the era of longer-term champions with the current emphasis on the number of title reigns? John Cena and the aforementioned Bruno both held sway in their own decades; Bruno’s two reigns eclipse even Cena’s longest by an order of magnitude, but Cena’s held more world championships than anyone but Ric Flair’s kayfabed total. And what about Verne Gagne, who kept the AWA title on himself largely because he owned the darned thing?

These are interesting ideas, even for someone who’s not a stats fan at heart, and Mr. Farrugia describes his initial impressive research, only to abandon the project as he realized many of the smaller regional promotions relied on more frequent title changes between lesser known competitors. There may have been good reasons for this (talent may have owned part of their promotions or were less of a risk to decamp for more lucrative territories; frequent title changes create an atmosphere that anything can happen at shows and generate bigger, hotter crowds) but they messed with Mr. Farrugia’s formula. This is a shame, since even these outlying results could have provided insight into how pro wrestling actually works (or doesn’t). Mr. Farrugia further laments that his other book would have become a series of flat profiles, adding nothing to the pro wrestling dialogue.

I’d argue that a subtle shift in focus away from the talent themselves and more to the treatment of championships would have added plenty. Today, pro wrestling titles are openly derided as props. But when wrestling is done right they’re more than that; they’re the grails to which we’re supposed to believe a whole bunch of underwear-clad supermen aspire. If Mr. Farrugia uses his stats-based approach he arrives at a deeper reading of any number of pro wrestling scenes, and maybe says something about fans and what they want. Verne Gagne and Jerry Lawler were both owners/wrestlers, yet Gagne kept a relative stranglehold on his belt while Lawler traded his around frequently. The Portland promotion that ruined Mr. Farrugia’s first attempt is another outlier. Don Owen was a very successful promoter for years without being an in-ring talent at all. He also had a solid reputation in a business not known for its honesty which made Portland a desirable territory for wrestlers to work. He pioneered televised wrestling concept and owned his own arena, and was able to hold off the WWF juggernaut of the 1980s until the territory closed in 1992. A robust history grounded in Owen’s treatment of his wrestlers and his titles vs. that of other smaller promotions, vs. how the big guys booked successfully or not so successfully.

That’s the book we didn’t get, and one I’d encourage Mr. Farrugia to revisit, since the dude can write.

Instead, he opts to the story of his own wrestling fandom with the self-published How to Be a Mark Without Leaving a Mark: One Fan’s Journey Through the World of Professional Wrestling. He argues that wrestling is a shared experience but acknowledges that “there is nothing extraordinary about it…” and, to be honest, he’s right. What follows is.

It feels harsh to say all of this when I write a column that partially tracks my experience as a fan as well, and where columns and articles across the wrestling internet use our common fandom as a device to hopefully draw readers in, but at almost 300 pages, whatever Mr. Farrugia’s insights, they’re a lot of watching and reacting, and relatively little doing or analyzing. It’s all familiar — the tall tales from school friends, the action figure battles, the next-morning videotapes on late-night wrestling (complete with a shout-out to Bob Cook), the live shows (including more than a few memorable pay per views) and autograph hunting.

Mr. Farrugia writes in great detail, but when nostalgic fans can find most of what he described on YouTube it raises the question of why experience Johnny B. Badd third hand when we can get him second hand for free? A bit of context is worthwhile. Mr. Farrugia writes from the perspective of a British wrestling fan, whose firsthand experience of WWF and WCW would necessarily come at a remove compared to an Atlanta or New York (or even Toronto) resident given relatively little touring activity at the time. Still, it means the story is detached, even if the fandom is genuine.

The best parts of the book are also the ones least focused on wrestling (in fairness, I also think Stephen King’s best stories are the non-horror ones like The Body (the basis for the film Stand By Me) or Rita Hayworth and Shawshank Redemption). Mr. Farrugia draws fun portraits of the people and places in his early life, particularly his father, whose presence and character informs the author’s coming-of-age. The story picks up with the author’s attempts to join the world of British pro wrestling, to train and find himself in support roles on shows. On this side of the Atlantic, they’re still pretty deep cuts but the occasional name check piques one’s interest. Mr. Farrugia has a lot to say about the state of British wrestling, and lines up more than a few fun anecdotes about meeting his heroes on both sides of the Atlantic. He’s the definition of a superfan, having travelled to several WrestleMania and honeymooned in Japan during a whirlwind tour of wrestling shows. The fact that his wife does not receive the dedication to this book is a miss. The challenge is that these personal stories tend to get lost in lists of names and rafts of card results. This is an extensively researched book, but the human interest tends to get lost in factual minutiae.

As a straight up wrestling book, How to Be a Mark Without Leaving a Mark doesn’t fully hit its mark. It’s well-written but laborious in its details. As a vehicle for an at-times touching autobiography it is much more successful. Mr. Farrugia is a passionate fan and a good writer, who makes much of the well-travelled wrestling history he covers interesting if not compelling. The book gets going when he talks about his own, more active experiences and run-ins with wrestling personalities… and really, it begs for him to go a bit deeper and see what he can do with the knowledge and passion gleaned from a lifetime of being a fan.

For what it’s worth, one thing I’ve learned is that when one is truly passionate about something, what originally seem like insurmountable barriers to entry really aren’t all that high. With kayfabe largely forgotten, the wrestling world is far more welcoming than it was even when we were kids. How to Be a Mark Without Leaving a Mark gets to this point but it takes a while. Perhaps this book is best read as an invitation for Mr. Farrguia to take that next step and see what he can contribute to wrestling beyond the action figures and 8x10s. I’d love to see where he goes with his next book.