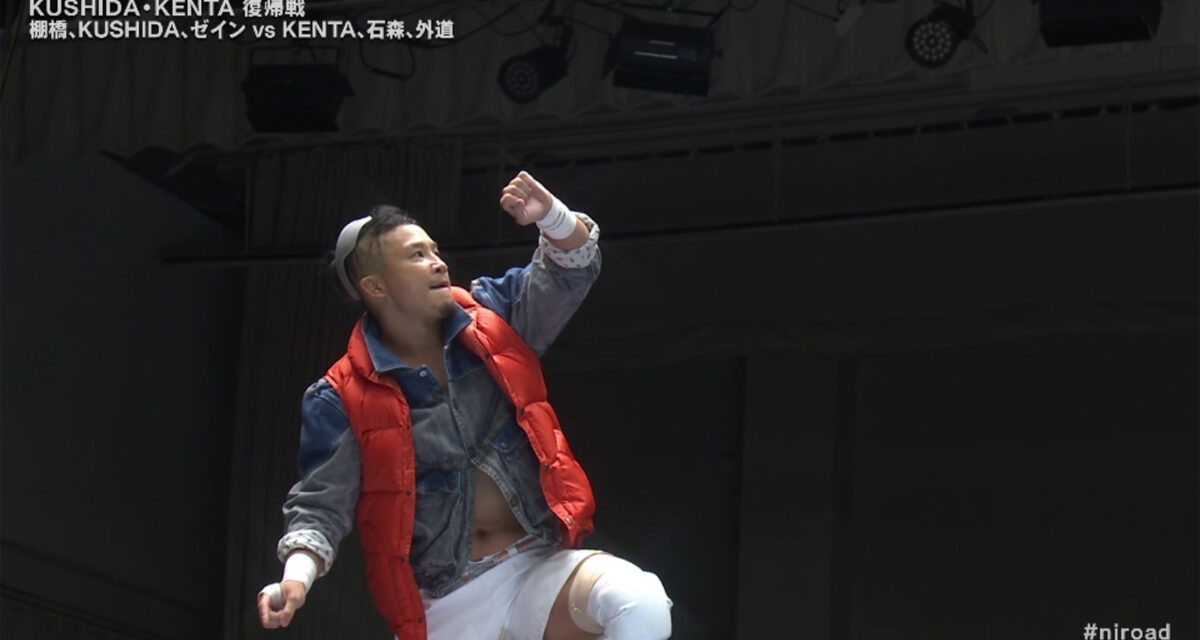 After languishing in NXT for three years Kushida has made his in-ring return to NJPW. Kushida teamed with Hiroshi Tanahashi and the popular Alez Zayne to battle Bullet Club (KENTA, Gedo and Taiji Ishimori) in the main event of New Japan Road tonight.

Alex Zayne was the first to make his entrance. He has really been embraced by Japanese fans. He is all smiles as he circles the ring and greets them. Zayne shakes Red Shoes’ hand and admires his choice of the colour red also.

Kushida came out to a loud Korakuen Hall crowd who still cannot cheer due to COVID regulations but clapped their hearts out. As he locked up with Ishimori the crowd clapped his name.

A funny bit has Gedo pulling Zayne’s hair so Zayne pulls his beard.

Ishimori didn’t greet Kushida with open arms. He made a point of dragging him out of the ring where he mauled him on the floor.

Back in the ring, Gedo bites Zayne’s forehead. 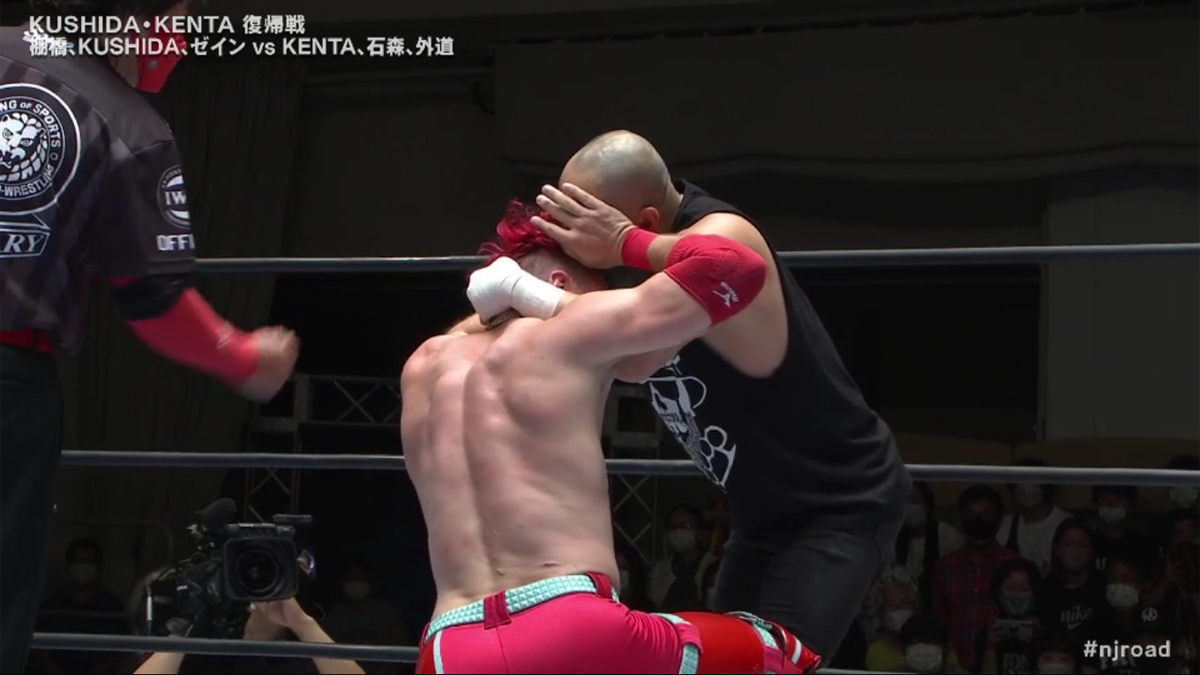 Gedo takes a bite out of Zayne. Courtesy: NJPW.

Bullet Club works Zayne over not permitting him to tag out. Zayne finally knocks Kenta down tagging in Tanahashi. The Ace batters Kenta and knocks the rest of Bullet Club off the apron.

Tanahashi tags in Kushida as Kenta tags in Ishimori so that the two junior heavyweights can square off again. Kushida gets the better of Ishimori. Gedo becomes the legal man for Bullet Club…which is a big mistake. Kushida puts him in an arm lock and pins him with a bridging suplex. 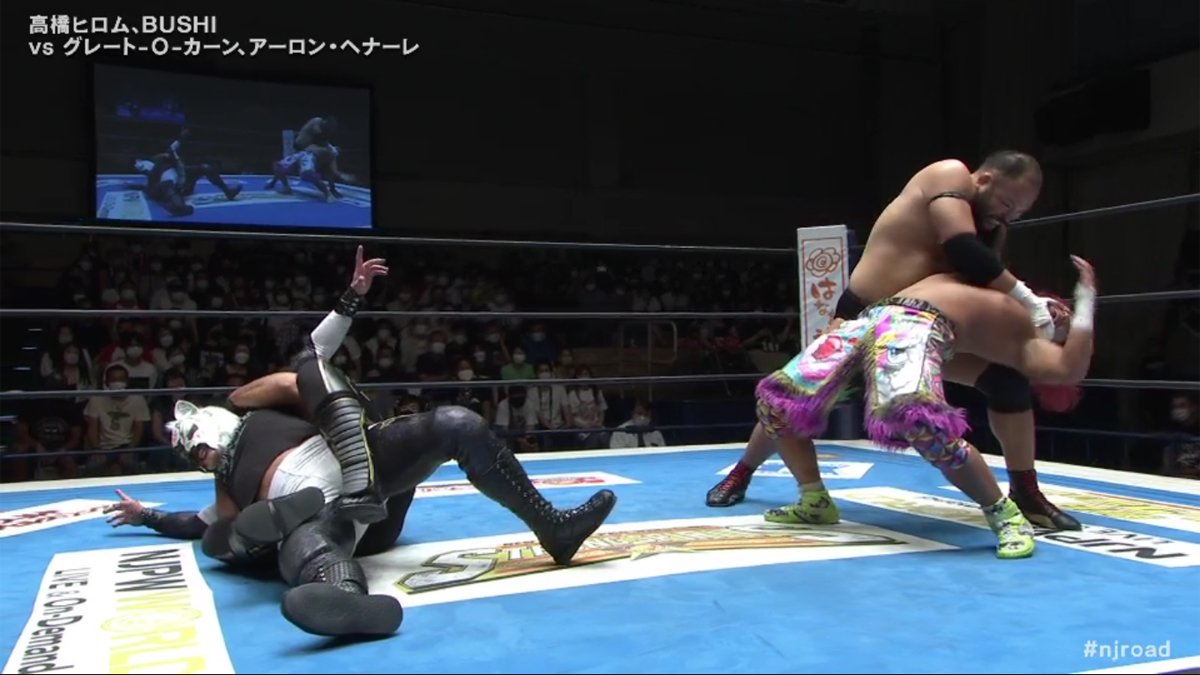 The Empire has everything under control. Courtesy: NJPW.

Takahashi wants Khan in for some reason. I am not sure why as I don’t speak Japanese. When Khan enters Hiromu gets on his knees and bows down to Khan then sits with his hands behind his back. It is all a trick as Hiromu flips him on his back. Hiromu drags Khan around the ring by his hair until Bushi gives it a double axe handle drop. An angry Khan delivers Mongolian Chops to them both. Henare puts Bushi in Ultima (full nelson lock) while Kahn puts Hiromu in his neck lock submission. Bushi taps out.

DKC exhibits all manner of martial arts poses and strike. Naito mocks him. DKC is applauded for his efforts even though he submits to Sanada’s Skull End. 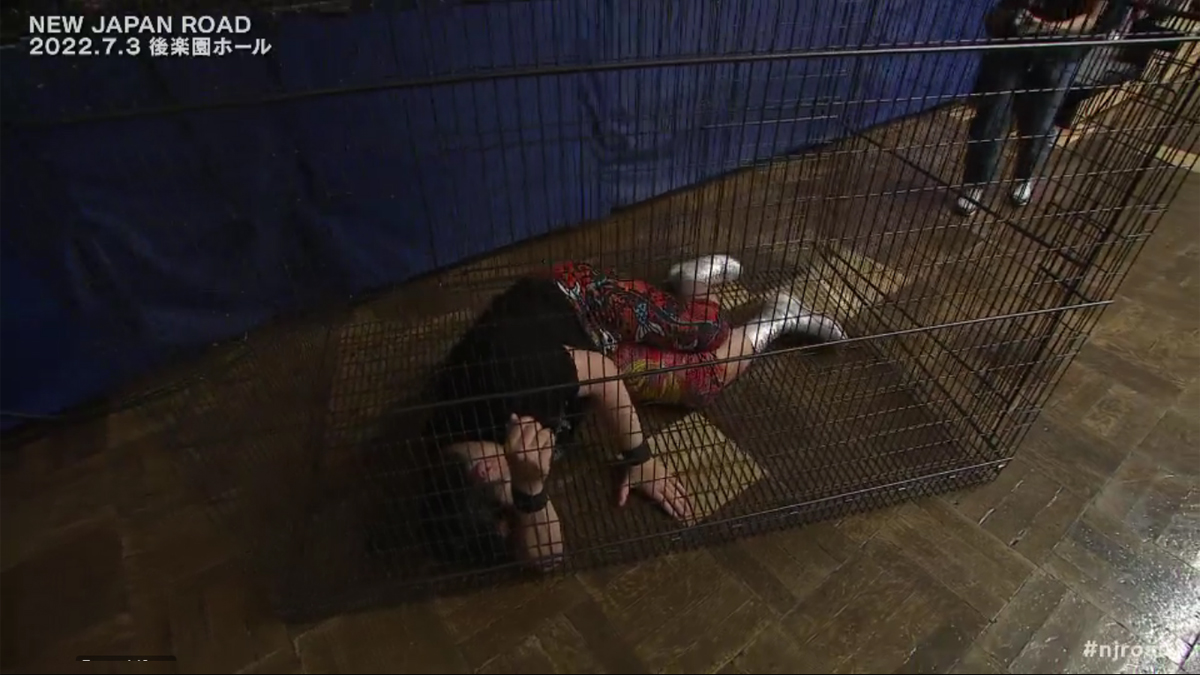 Yano slams Togo into the dog crate at ringside. Yano attempts to throw Togo inside but punches him in the stomach and rakes his eyes. At Tuesday’s New Japan Road, Yano will battle Togo in a Dog Crate Match. Sho comes down to the ring distracting the official. Evil and Yujiro deliver low blows to Goto and Hashi. Yujiro pins Hashi with Pimp Juice. Togo chokes out Yano with his garotte and locks him in the dog crate after the match.