AEW Rampage: The Forbidden Door is kicked wide open with Wheeler and Cobb in action 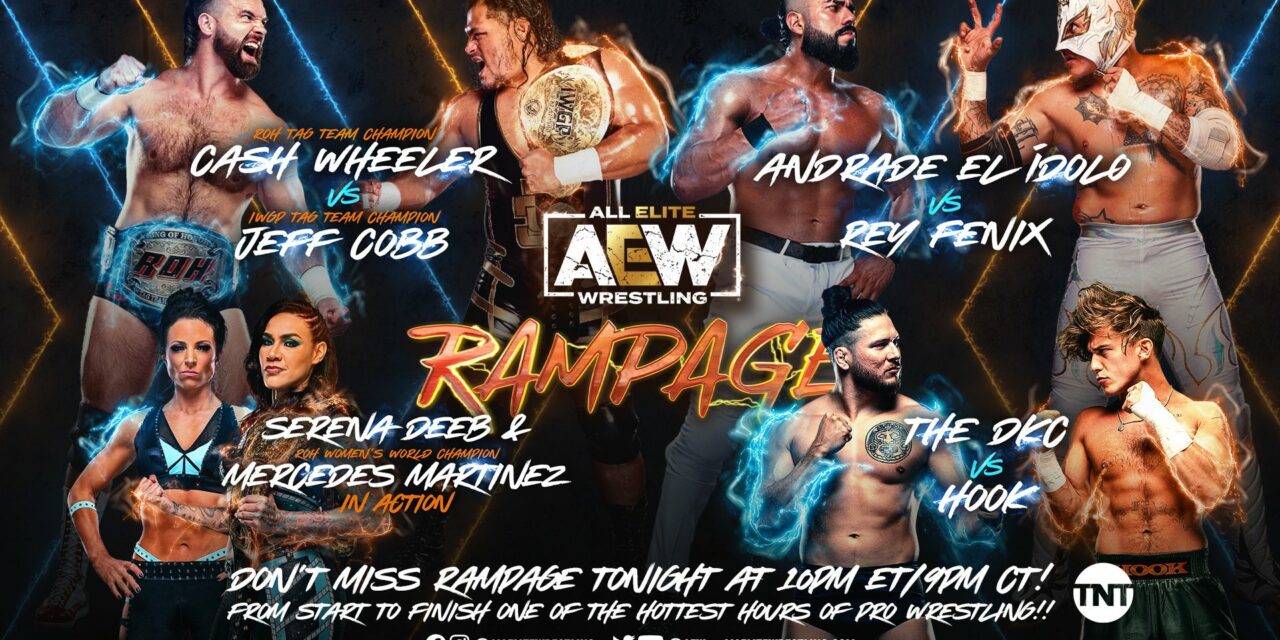 It’s Friday night and you know what that means?  No, not to roll back women’s rights over reproduction by 50 years (thank you so little, United States Supreme Court). It’s time for AEW Rampage, and All Elite has kicked the Forbidden Door wide open with the final show before the pay-per-view. The big match of the night has the United Kingdom’s Jeff Cobb face off against FTR’s Cash Wheeler.

For someone so disillusioned by politics, this a good respite for now. So let’s head to the UW-Milwaukee Panther Arena in Wisconsin ( or as I call it, the Motherland).  Excalibur, Taz and “The Wizard” Chris Jericho have the call and we dive into the First Match of the night (because AAA and New Japan can’t play nice)… 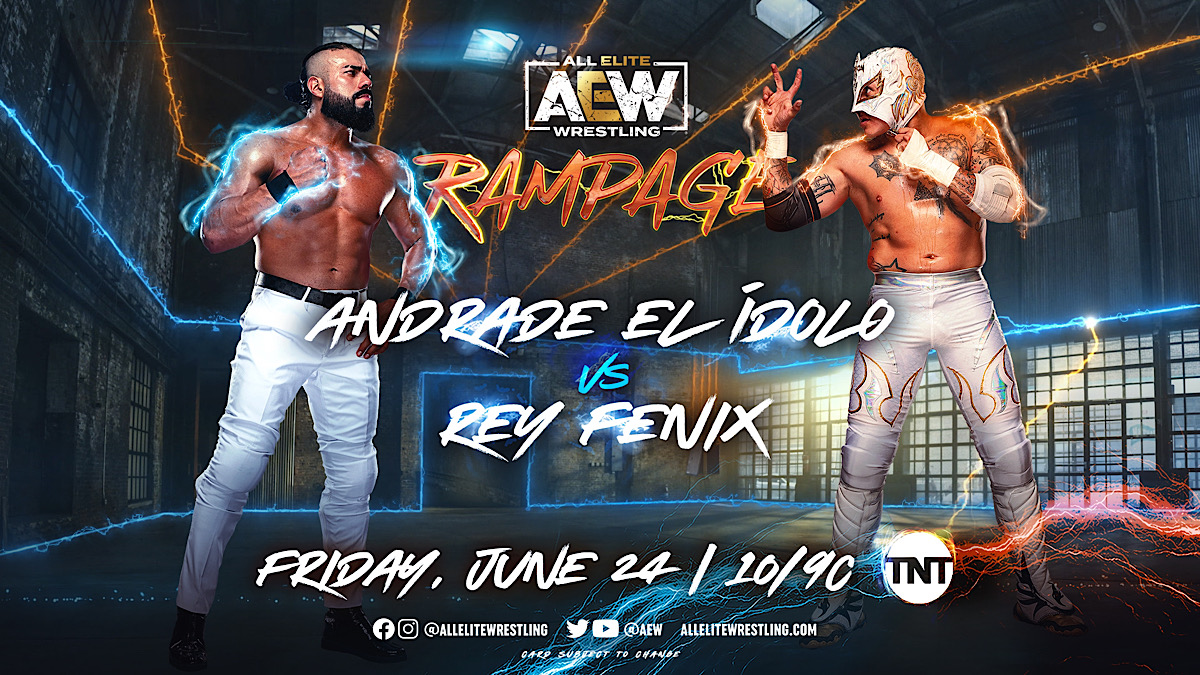 At the start, Andrade is Tranquilo but Fenix es un Ánimo early in the match.  Andrade tries the  Three Amigos, but Fenix blocks and shows how it’s truly done (RIP Eddie Guerrero).  Fénix goes up top, and Andrade rolls out of the ring, but Fenix gets a splash on the outside.  Now he gets El Idolo back I the ring and Fénix goes back up top, and Andrade sends him crashing down.  During Picture in Picture he throws him to the steel steps! And then n the ring Andrade keeps Fenix grounded, and slams him to the mat.  Andrade goes up top and Fenix gives chase, but he knocks him off and gets a double stomp to cover for a two count.

Andrade rushes but Fenix gets a big boot to a double stomp of his own, then uses the ropes to springboard for a missile dropkick for a two count.  Fénix nails with a rolling cutter for another two count, but Andrade gets a roll up for a two count of his own and he can’t believe he kicked out.  Fenix walks the tightrope, but Andrade knocks him off and goes for double knees on the ring apron, but Fenix dodges and Andrade runs into the steel ring post.  Fenix lands with a double stomp to the outside and we get more Picture in Picture , where Fenix goes for a Swanton but misses the mark.  Andrade grabs for a roll up and gets a two count.  Both men battle on the outside and we get…

Ads (I should be more upset by this, but it’s a nice break in the action.  Also, given recent news events, this is *way low* on the totem pole of things I am aggravated about.)

Back to Fenix with a Spanish Super Fly to cover but Andrade gets a foot on the bottom rope to break the count.  Fénix backs up to the corner hurting, and Jose gets a tablet to Andrade.  He gets up and swings, but referee Amber catches him in the act and tosses it outside.  Andrade sends him to the outside, but Fenix hits the ropes for the swinging Superkick, and he gets a tope suicida on Andrade on the outside.  As Abraham Abrahantes and a Jose enter the ring to have a nerd fight, Rush comes out for the low blow to Fenix , and Andrade gets the hammerlock DDT for the pin.

Rush and Andrade unmasked Fenix, and pose with the new La Facción Ingobernable shirts (I want one!) and big brother Penta Oscuro comes out and makes the save with a shovel to scatter La Facción.

Eddie Kingston cuts a promo on forbidden door and Blood and Guts, but I’ll the Mad King speak for himself…

Keith Lee and Swerve Strickland are in Swerve’s house, but Keith ain’t feeling it.  He says they’re on the same page but they’ll get there.

Now for women’s action with… 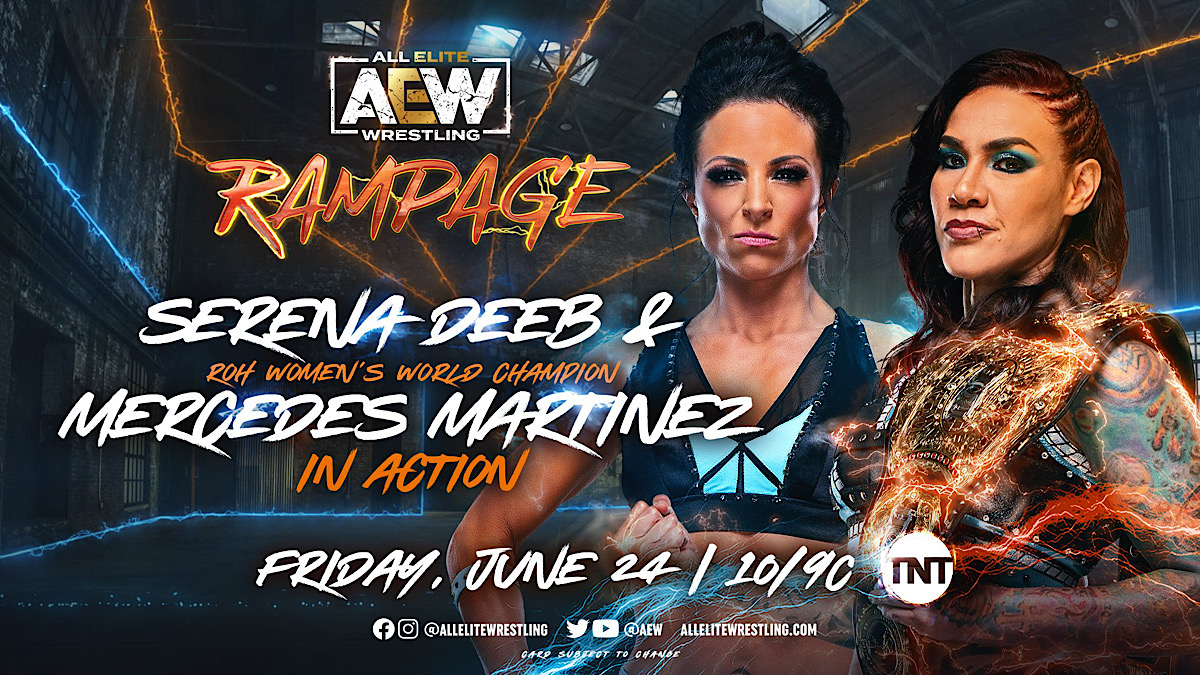 Serena Deeb and Mercedes Martinez vs. Sierra and Laynie Luck

On a scale of one to AEW Dark ELEVATION, it’s a squash match where the story is Deeb and Martínez try to one up each other.  Martínez gets Luck in a Dragon Sleeper and Deeb cuts off Sierra with the Serenity Now submission, and that’s all she wrote.

Your Winners  is Pinfall:  Serena Deeb and Mercedes Martinez

There was a point when the ROH Women’s champion and Deeb were not on the same page.  Could there be trouble in paradise?

We get a video package on Tully Blanchard Enterprises with Brian Cage, and two other guys, so..that’s a thing…

.@TullyBFTR has a new venture recruiting the “best players in the business"!

Tune in NOW to #AEWRampage on TNT! pic.twitter.com/s3Q71rtunx

Lexi Nair is backstage with the ROH World Champion Jonathan Gresham and Lee Moriarty.  Blanchard comes in and says his boys have a better win record than anything they’ve  done on AEW Dark (which may not be the best thing to brag about, but I digress) , and Gresham sets up a tag challenge with his boys versus he and Moriarty.  Blanchard basically says that it’s on junebug.  I would like to see that, honestly.

Now cue the Action Bronson for next match that, I guess, is necessary… 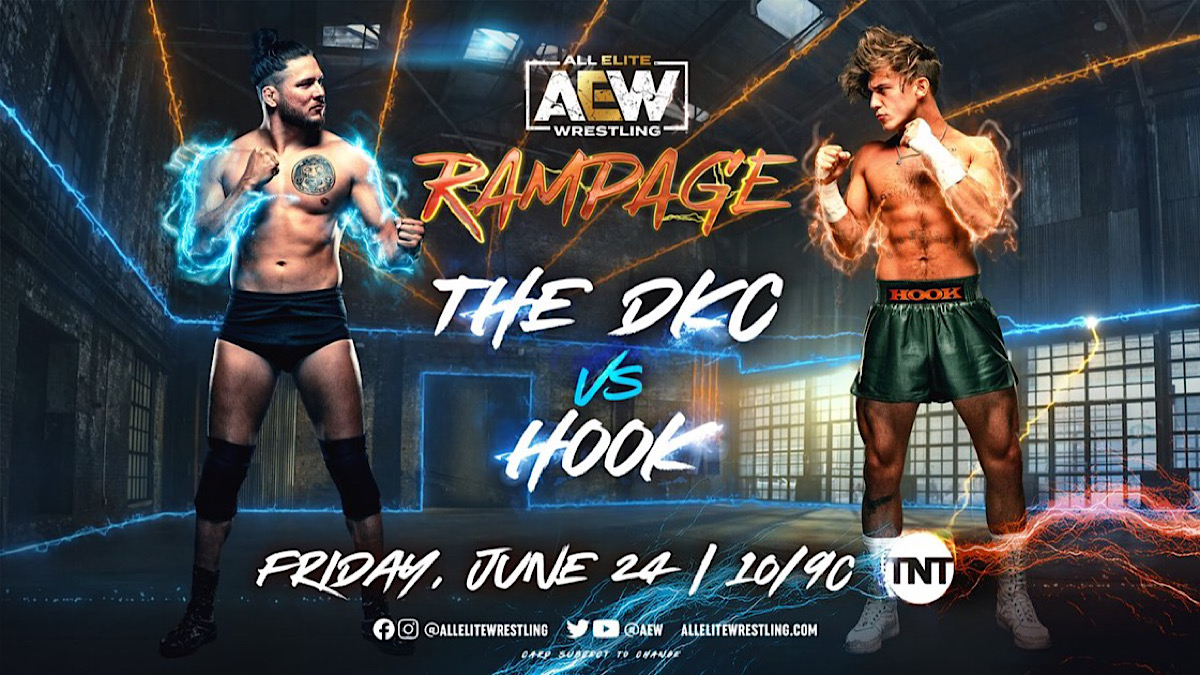 Hook vs. The DKC

DKC is a prodigy from the New Japan Pro Wrestling L.A. Dojo, but again, my Squash-y Sense is tingling, so here’s my Haiku Recap (TM):

The ring by Cold-hearted

Your Winner via Submission:  Hook

Simply put, this is a plus ten to feature DKC to a mainstream audience.  But I will subtract a million points because there was no Danhausen to put a curse on this match.

Mark Henry is with Cash Wheeler and JeffCobb for the final words before their upcoming match.  Wheeler says singles wrestling isn’t his forte and he knows Cobb’s history in the ring, but he promises Cobb will not be 100%.  Cobb retorts he is an Olympian, and to put respect on name, and the tag belts with come to the United Kingdom.

Before we get there, for some reason, we have The Gunn Club and The Acclaimed and they are excited for the Forbidden Door PPV.  TYE Gunn Flub are excited that they are heading to Japan, but Anthony Bowens corrdts the A$$ Boys and says they’re heading to Chicago that day, so Scissor Me Daddy Ass.

(I will never get used to writing this, but I don’t object to it either.)

Caprice Coleman joins the commentary team as we go to.. 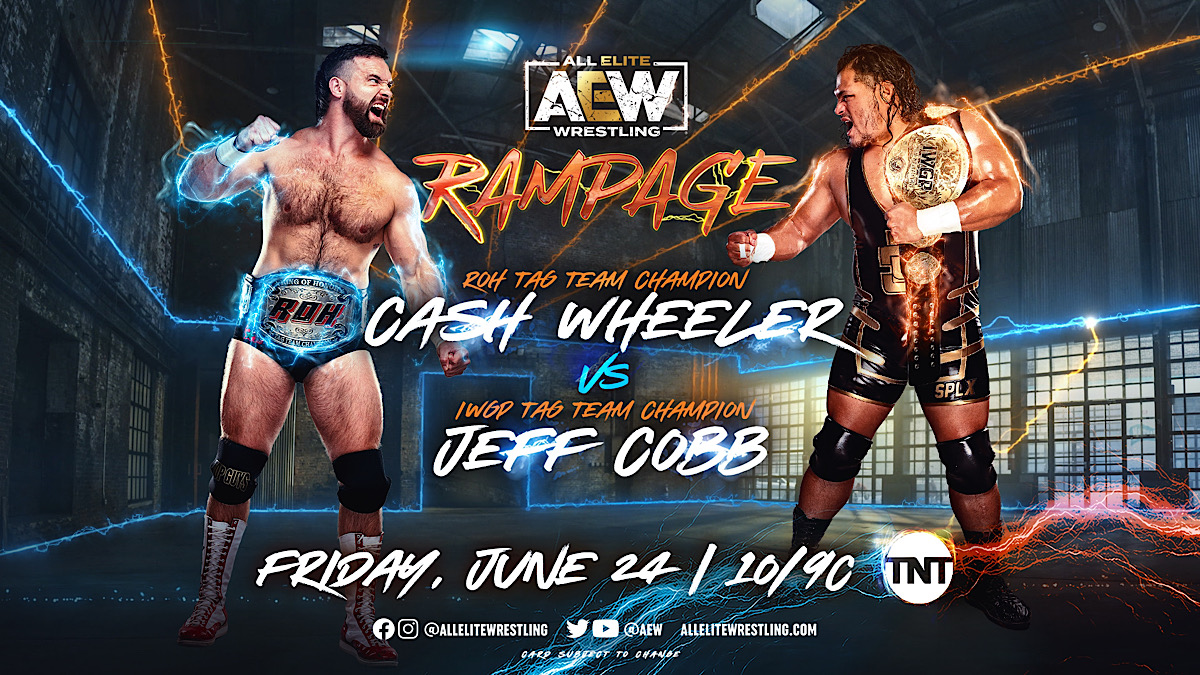 Neither Cobb nor Wheeler have their tag partners with them, so this is going to be a straight-up fight.  As the bell rings, you can tell this is a big hoss match, with neither side backing down.Jericho names  Cobb the Sports Entertainer of the Week (TM), and I guess that’s a good honorific to be bestowed.

Wheeler attacks the taped leg of Cobb, but not able to take him down completely! As Cobb stuns guns him on the top ropes and sends him to the outside of the ring.  During Picture in Picture, Cobb rams Wheeler to the ring post and then Cobb tosses Wheeler back in the ring and lays a hurting on him.   He channels his inner Hawaiian and hangs ten on Wheeler’s back.  Cobb gets a standing senton to cover, but only gets a two count.  Now Cobb nails a suplex to a toss to the ring and then a chinlock, and he is just manhandling Wheeler.  He manages to reverse to get a sleeper hold but Cobb breaks up the submission.  Wheeler chop blocks Cobb’s taped up knee and he rolls out, but Wheeler follows up and gets a springboard splash to the outside.  Wheeler gets a sunset powerbomb on Cobb for a two count.

Your Winner via Pinfall:  Jeff Cobb

After the match, this lead to a big brawl between FTR, The United Empire, Orange Cassidy and Roppongi Vice, just like on AEW Dynamite.  Jericho is amazed at the chaos and then Eddie Kingston came out and attacked him at the commentary booth. He stabs The Wizard in the head with a pen as chaos ensures as the Forbidden Door widens open as the show goes to the Countdown to the PPV.

it was a solid show, but it didn’t quite have the gravitas that this AEW Dynamite show had this week.  Really, this how was to whet the appetite of anyone on the fence on buying the PPV.  Honestly, with all the nonsense going on where I live, I need to check out of reality for awhile.

For now, see you at the PPV!