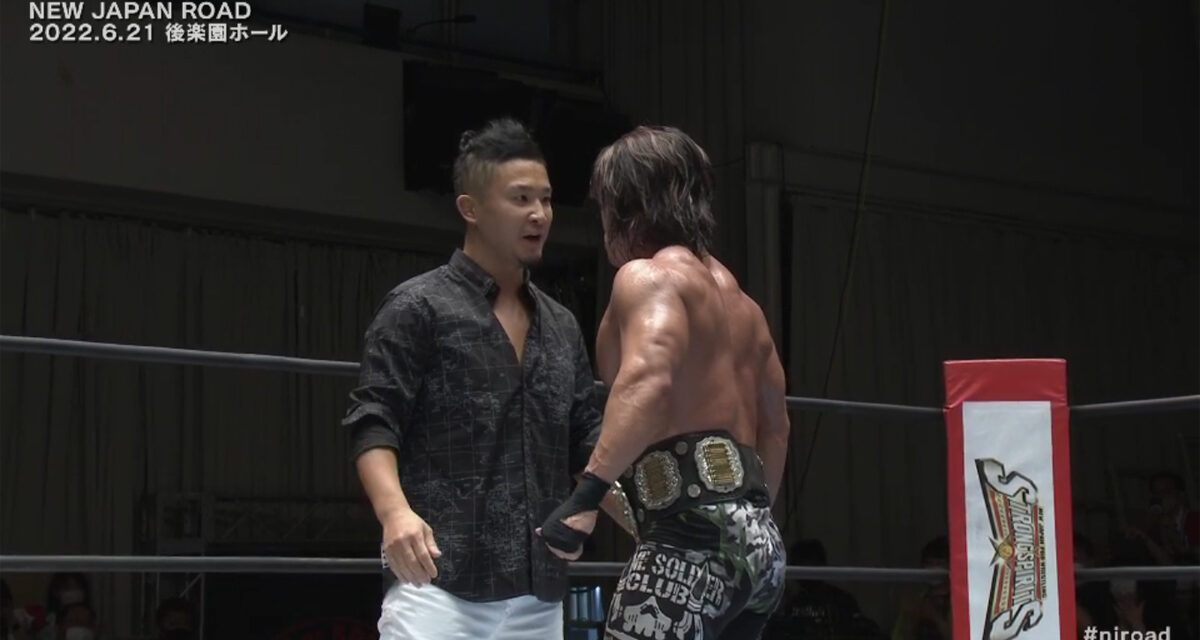 Kushida is back in NJPW. Kushida made his return following tonight’s main event at New Japan Road.

“I came here to wrestle and I will. I’ll be spending all my time, put all my experience on the line to spend the rest of my wrestling life here in NJPW,” said Kushida.

“I left the junior division three and a half years ago but Hiromu, Desperado and Ishimori have carried the standard to sell this place out and put a match out there worthy of the IWGP letters. If I don’t take the belt though, I have no place here,” he continued.

“Prove yourself. You can’t just come back and expect me to accept a challenge like that,” he said.

Backstage, Kushida had this to say.

“Antonio Inoki once said…It’s better to make the jungle than it is to protect it. I think we’re on the verge of something really cool here,” he said.

In April, Kushida did not renew his contract with NXT/WWE. Kushida left NJPW and joined NXT in 2019. He had feuds with Velveteen Dream, Johnny Gargano and Santos Escobar. In that time as a singles wrestler he captured the NXT Cruiserweight Championship once by defeating Escobar in April of last year. He lost the belt approximately four months later to Roderick Strong on an episode of NXT 2.0. Kushida formed the Jacket Time tag team with Ikemen Jiro but they didn’t have much success in NXT.

In a match of the year candidate, Taiji Ishimori and Hiromu Takahashi wrestled an absolute classic bout. For awhile it looked like Hiromu would weather the storm which included being piledriven on the ring apron. Ishimori though put him away with an Avalanche Bloody Sunday from the second rope and a Bloody Cross.

Earlier, Tomohiro Ishii moved on in the AEW All Atlantic Championship tournament by defeating Clark Connors. The two bulls battered and bruised each other in a real wrestling war until Ishii hit his Brainbuster finisher to end things. Connors may have lost but it was one of the best matches in his very promising wrestling career. Ishii will now face Pac, Miro and either Penta Oscuro or Malakai Black at the Forbidden Door pay-per-view this weekend to determine the first ever AEW All Atlantic Champion.

Douki wins with the Douki Chokey.

Taichi wins with a Buzz Kick to the head. 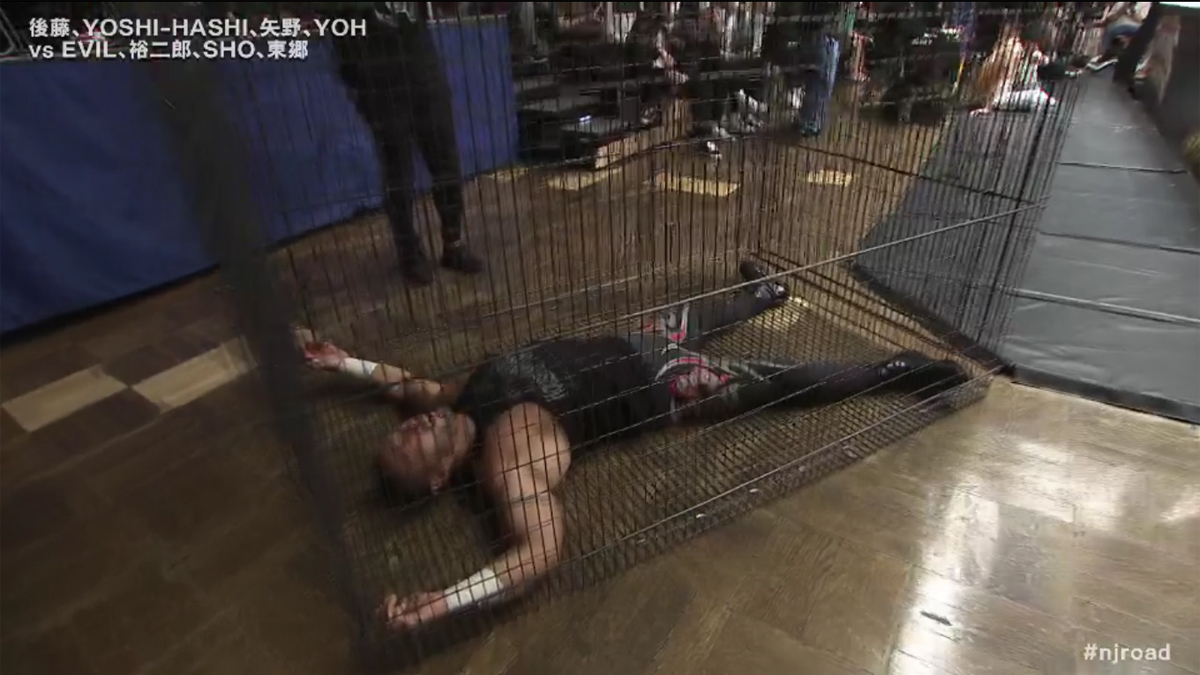 Togo is all caged up. Courtesy: NJPW.

Chaos attacks before the bell even rings. Yano drags Togo to through the curtain to the backstage area. When Yano returns he is pushing a dog crate which now contains Togo. The House of Torture eventually frees Togo. He chokes Yano with a steel chair. Sho taps out to Yoh’s ankle lock but the official and Yano are tied up preventing Togo from bringing his garotte into the match. Yujiro hits Yoh in the head with his cane. Evil slides Sho’s wrench to him. Sho hits him in the skull while Yujiro distracts the official. Sho pins Yoh. Togo throws Yano into the dog crate. Evil cracks Yoshi with his own bo staff and Goto with his. 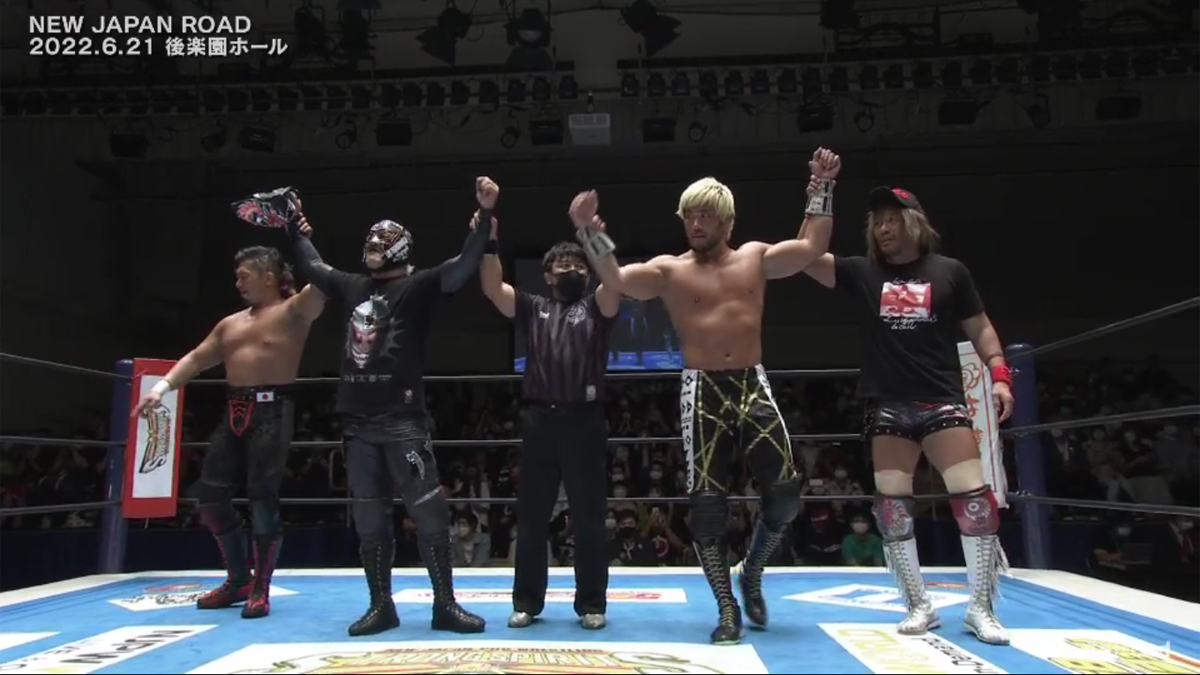 Young Lion Fujita taunts Takagi before the bell. Los Ingobernables de Japon all chuckle to themselves. Fujita runs across the ring and pummels Takagi in a corner. The faces take turns running in and striking Takagi in said corner. Fujita puts Takagi in a Boston Crab. Takagi reaches the ropes. Takagi dares Fujita to run off the ropes and shoulder tackle him. Fujita cannot take Takagi off his feet. LIJ basically throttles the upstart until he is made to submit to a Boston Crab by Bushi. LIJ then take turns putting the Young Lion in submission holds to teach him a lesson.