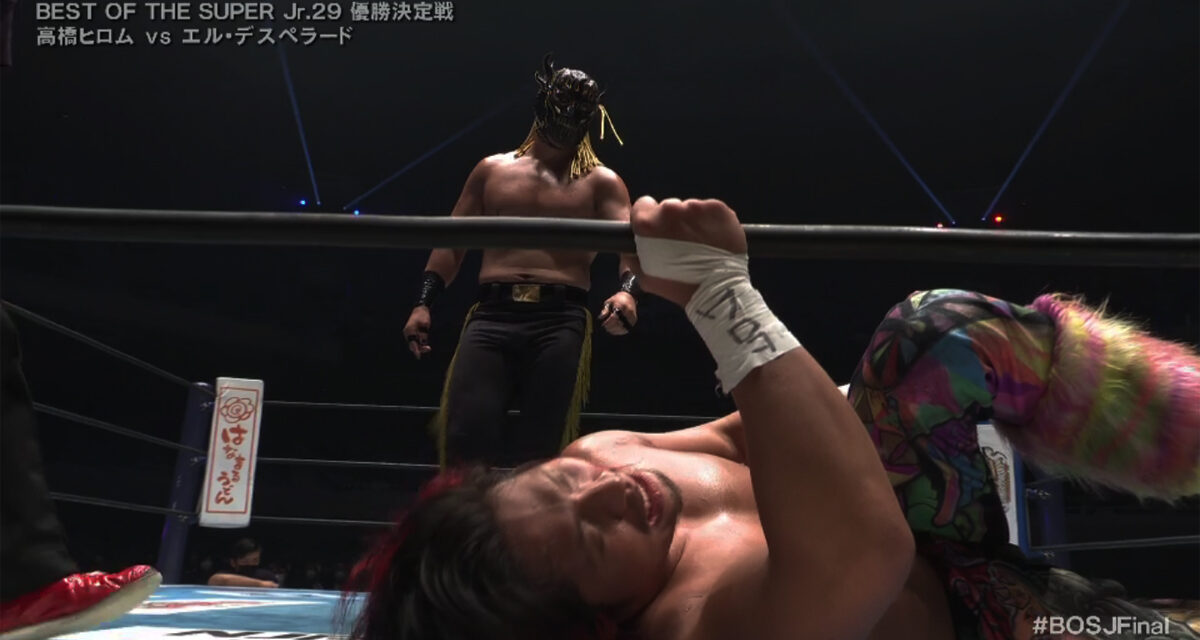 For the fourth time in his career and the third time in a row The Ticking Time Bomb, Hiromu Takahashi, is the Best of the Super Juniors in NJPW.

In a merciless tournament finale Takahashi defeated El Desperado despite having an injured knee courtesy of El Desperado’s Suzuki-gun pal, Yoshinobu Kanemaru. Kanemaru damaged the knee in their BOSJ match. 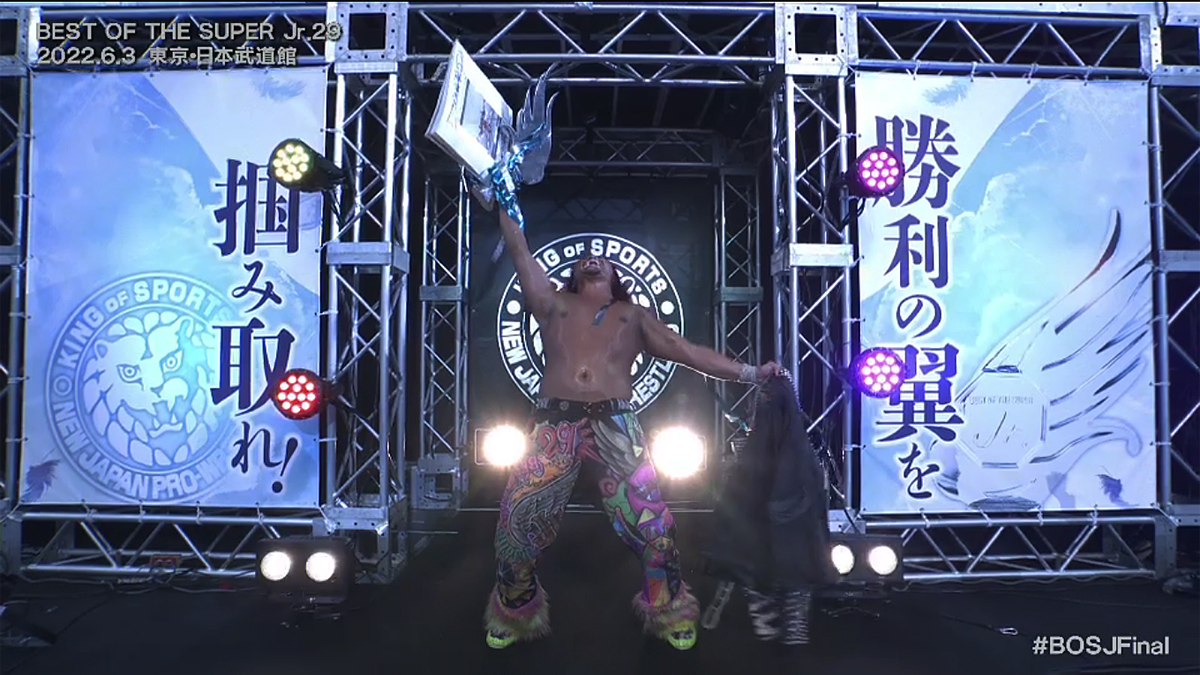 Tanahashi is the Best of the Super Juinors. Courtesy: NJPW.

Takahashi kicked out of two Pinche Locos and escaped Desperado’s Numero Dos submission a number of times to soldier on. It took two stunners, a Time Bomb and a Time Bomb 2 for Takahashi to finally pin Desperado in a match that went over thirty minutes.

Takahashi will now face IWGP Junior Heavyweight Championship Taiji Ishimori for the belt some time in the future. Takahashi beat Ishimori in their tournament match. 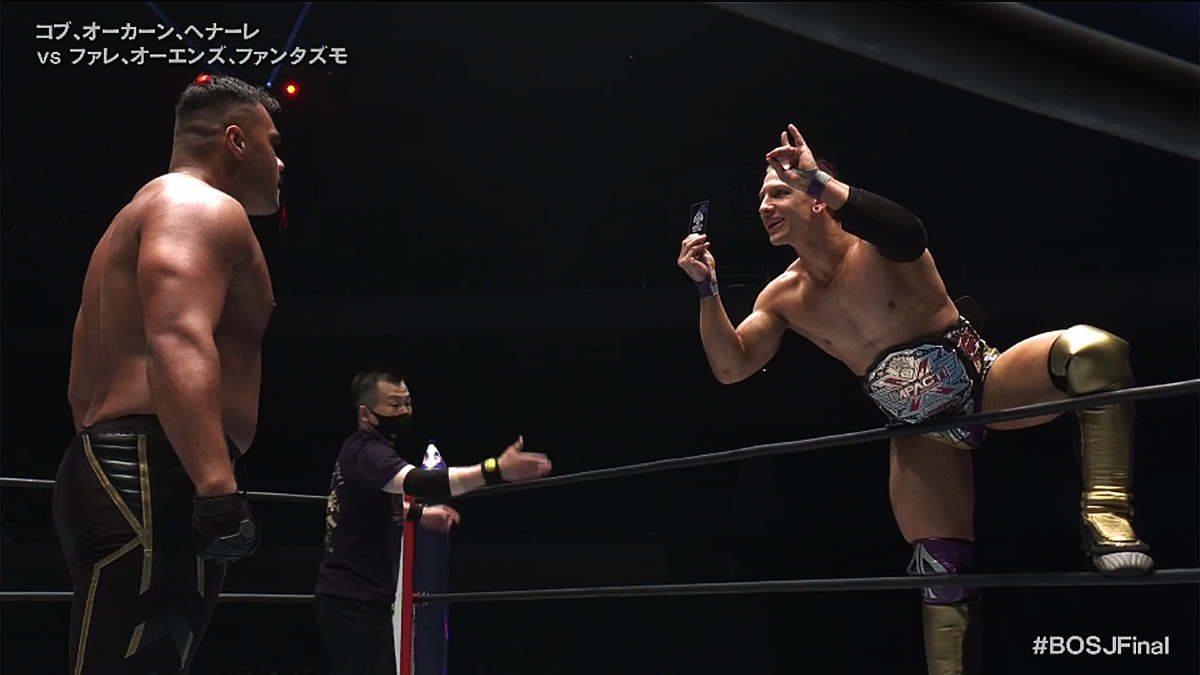 In the match between The United Empire and Bullet Club, Ace Austin showed up and taunted Aaron Henare on the apron. He even threw up the “Too Sweet” Bullet Club sign and held out one of his signature playing cards. Henare took a swing but missed Austin. As Henare turned around he got a Sudden Death kick and CR2 from El Phantasmo for his troubles and was pinned.

Austin revealed that his cards now have the Bullet Club logo printed on them. Austin was confirmed as a member joining Bad Luck Fale, El Phantasmo and Chase Owens for a salute. 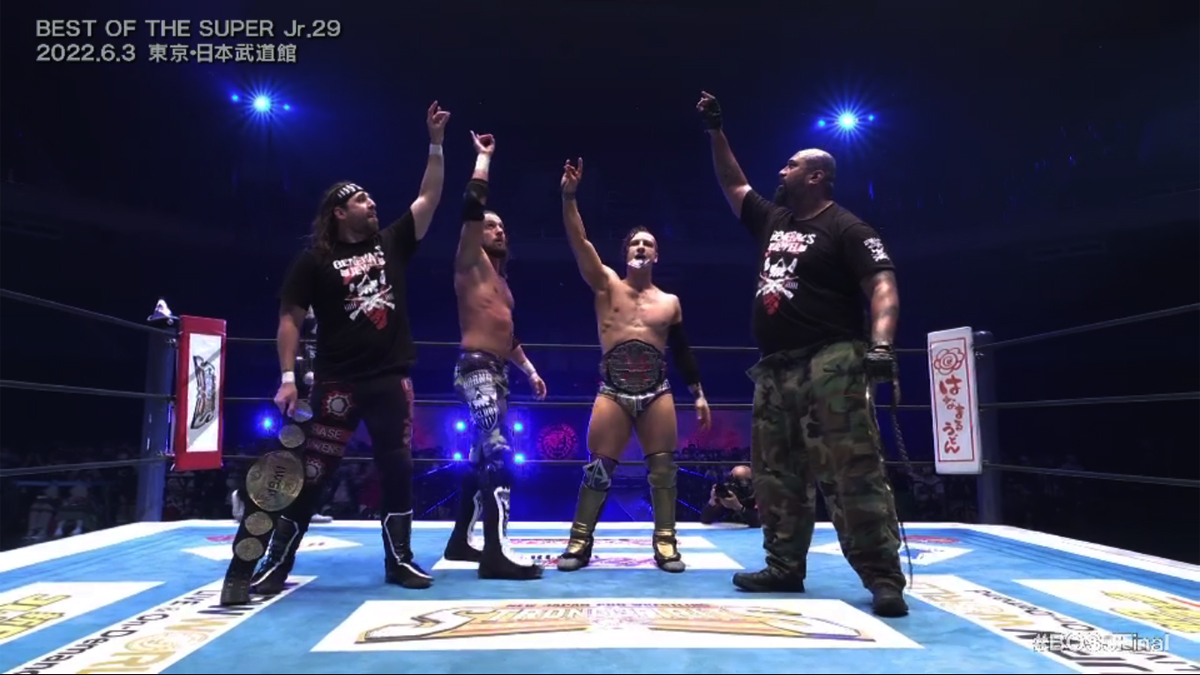 Bullet Club gets a new Ace up their sleeves. Courtesy: NJPW.

Bullet Club leader Jay White also had a surprise before Jado, Tama Tonga, Toru Yano and Kazuchika Okada took on himself, Doc Gallows, Taiji Ishimori and Gedo. A fully-healed Kenta who hasn’t been seen since the brutal No disqualification match for the IWGP United States Heavyweight Championship at Wrestle Kingdom against Hiroshi Tanahashi was ringside for the match.

Honma wins with the Flying Kokeshi. Juice Robinson couldn’t wrestle Honma as planned as he suffered an appendicitis attack.

TJP lifts Taguchi up on his shoulders. Akira hits a cutter on Taguchi from the top rope. TJP makes Taguchi submit to the Pinoy Stretch. Akira and TJP have defeated the IWGP Junior Tag Team Champions.

When Dick Togo tries to interfere, ZSJ locks both him and Evil in submission holds. Togo takes a swig from Kanemaru’s whiskey bottle. Kanemaru kicks Togo in the stomach and Togo spits the whiskey in Evil’s face. Sho taps out to ZSJ’s arm bar submission. Kanemaru spits whiskey into Togo’s face after the match. Suzuki-gun leaves with two of the three NEVER Openweight 6-Man Tag Team Championship belts.

Takagi pins Taka with a simple Ground Cobra hold. Takagi does the same thing to Taichi after the bell as Naito slaps a six count.

Tama Tonga gets the win with a Gun Stun on Gedo.