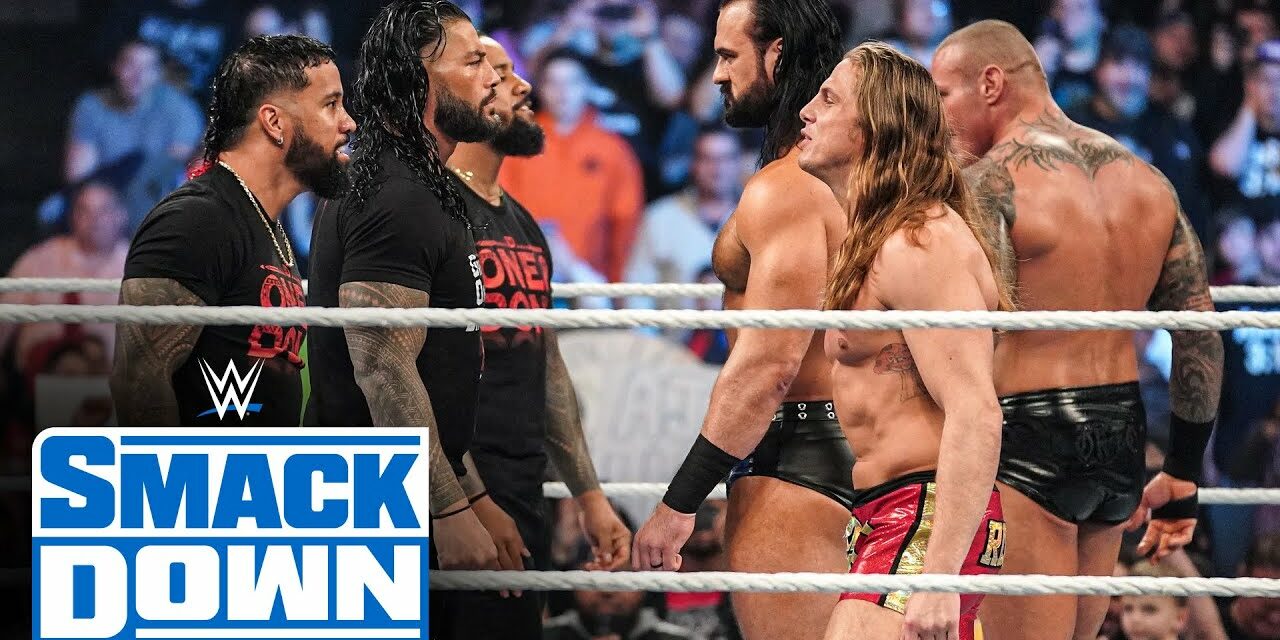 Hello, wrestling fans. SmackDown is coming live from Long Island. We are two nights away from WrestleMania Backlash and its awaiting matches. I know I’m exited for the 6-man fight between the Usos and Roman Reigns vs. Drew McIntyre and RK-Bro.

One of the most entertaining fights happening this evening is the one between Charlotte Flair and Ronda Rousey. After one of Flair’s unfiltered speech opinions in the ring, Rousey raced out from backstage to drag the Women’s Champion from under the ropes.

From there, an altercation commenced. Michael Cole says that this rivalry between Flair and Rousey is more than just physical but emotional. I’d say. The hits Flair was giving Ronda to her abdomen outside the ring were filled with anger. Since she likes to flaunt herself, Charlotte obviously doesn’t mind a little bruising.

Ronda knee kicks Flair multiple times in the stomach and pushes her against the ring pole. I swear I heard a “clack” as Flair hits her forehead.

Just like the cops, the officials arrive at their own pace to attempt the breaking of these two ladies fighting. One of the officials wearing a black suit was holding onto Ronda from her torso gets a boot to the face from Flair, she was hoping to hit her again.

“These two are going to tear each other apart!” Pat McAfee shouts rather enticed. More officials try to separate Flair and Rousey, but all in vain since these women prefer to knock the other out.

The officials did temporarily manage to remove them from each other until Rousey tackles Flair and starts beating punches onto her spine. McAfee says that Flair was being dragged off like a dead body. To be honest, I laughed a bit.

At WrestleMania Backlash there will be no one there to restraining them from making the other say “I quit” with blood as a bonus.

The evening to watch people scream, wrestlers sweat and high-flying moves is on tonight. Don’t forget the swearing.

After trying to break Naomi’s arm last week, Baszler attempts to do the same on Sasha during this match. Shayna is scary according to Cole, but Banks ain’t afraid of anything.

Sasha manages to throw Baszler out the ring then baseball slides a kick to Shayna’s arm to push her to the ground while being distracted by Naomi on the sideline. Banks slams repeatedly Baszler’ hand against the announcement table as a favor to Naomi, and she loved it. As did I.

Sasha performs a maneuver rarely seen called the ‘Bulldog slam’ onto Shayna’s face then attacks Natalya outside the ring with a leg throw. As she returns to ring before the count out, Shayna collides her knee to Banks’ jaw causing an immense thud that shook Pat McAfee, Michael Cole and myself.

Even though Baszler won with a roll up and Natalya’s help, they still ambush Naomi after noticing her efforts at arguing the faulty win.

Naomi struggles in Natalya’s grip forcing her to watch Baszler taunting to stomp Banks’ arm. Suddenly, Naomi manages to kick Shayna in the head and elbow Nattie in the face. Banks and Naomi grab both of Nattie’s arms, bring her down with their feet placed on both sides of her face and slam her.

Backstage during an interview with a woman named Megan, Baszler and Natalya ensure that the sense in them being victimized stops here. There were able to snatch a win from the tag champs as fairly as they can muster. Next week, Nattie and Shayna will put their planning into action. Let’s see if they get showered with gold.

Nappy Corbin graces us with his presence during a segment of Happy Talk. He goes on to ramble about the many hurtful ideas he has ready to inflict upon Madcap Moss at WrestleMania Backlash.

Moss appears on the big screen and starts cracking jokes. “Did you want to start singing? Because you look like you’re trying out for a Pitbull cover band!” I did find that funny because Corbin does look like he’s trying to be Pitbull. Shame, there can only be one. Moss mentions that Corbin does some charity work by allowing tattoo artists to engrave his skin with ugly graffiti. “It looks like a Hot Topic threw up on your chest.”

Corbin has had a lot of phases over the years: Constable Corbin, King Corbin, Baron Corbin, “Broke ass Corbin” to name a few, yet he hasn’t been entertaining according to Moss. Corbin could go back to his lone wolf phase, but wolves have hair. So, Moss has deemed Corbin as “the Big Bald Wolf”. Surprisingly, Happy walked out. I was astonished and perplexed.

Gunther has been a force to be reckoned with since I saw his win against Joe Alonzo a few weeks back. He absolutely destroyed that man, it was amusingly amazing. The match ended so fast. Now, Gulak has a go at the no-smiling man, Gunther. That’s the name I’m giving him.

McAfee said that Gulak looked distraught, and I very much agreed that a giggle summoned itself out of me. I saw his face.

I jumped out of fear when Gunther reversed Gulak around using his head to reveal Drew’s chest and plummeted his fist into it.

Gulak punches Gunther and he returns fire with a boot to Drew’s face. Yikes. Gunther places Gulak on the top turnbuckle, slaps his chest before stretching him out by putting his boot to Drew’s jaw. Gulak enters into a ‘Sleeper hold’ from Gunther, trying to escape. While McAfee says that Drew is fighting to get out, Michael Cole says he’s fading.

Gunther ‘Power bombs’ Gulak to the centre of the ring for the win. Gulak loses control backstage after his match. Kicking and throwing things around. I read a comment and it said: “This is the calmest breakdown I’ve ever seen.”

I have to agree on that and laugh.

Holland charges towards Xavier, but gets sent into the steel stairs.

Kofi helps Woods out of Sheamus’ grip, climbs to the top of the ring post, jumps onto Sheamus into the barricades. Kingston has been performing many crazy things tonight. He drop kicks Sheamus to his knees on the edge of the ring, runs towards him off the apron and flies, crashing onto Sheamus again.

Kingston kicks Sheamus’ face and he lands on top of the announcement table as Kofi signals Woods to jump from the top of the ring post. We’ve been wondering where Butch has been since his tantrum. He summons himself from under the ring floor from behind Kofi and proceeds to beat him up. Apparently, Butch wasn’t at Coachella.

Holland holds onto Woods to allow Sheamus to ‘Bro kick’ him in the face and Butch knees Kingston to his face. Holland and Sheamus drag Woods to the table that has been set up in the ring and bombs his body into it for the win. Even after the bell, Butch’s rabid ass still went for more by punching Woods’ head.

Lacey Adams does her fifth segment about his dark and painful past with her family. Her father overdosed two days prior to her WWE tryouts after he lost his battle with mental health and addiction. How she found one of her family members bleeding to death and the other laying in a parking lot.

She has placed her life on pause in order to break the circle of drugs, mental illness and pain that has surrounded her family. That regardless of where she came from or how her past was one of the most toxic, she is the woman she is today because she kept fighting and pushing through. Reminded herself that she can do it and will do it. A mother, sister, wife, United States marine, WWE Superstar and soon-to-be SmackDown Woman’s Champion.

The whole WWE universe of fans welcomes Lacey Evans with cheers and support.

Nakamura has complete control of Zayn during the beginning of this match, Zayn would have probably given an excuse that he wasn’t ready to get his back slammed.

Nakamura places Zayn into an ‘arm bar’ maneuver, but Sami surprises him with a roll up and fails. Shinsuke knocks Zayn to his knees with a backwards kick to the face as you hear the echo.

Nakamura prepares to perform his ‘Kinshasa’ move, but Zayn’s finisher according to McAfee is running away. Sami is seen crawling behind the announcement table to avoid Nakamura, but he momentarily catches Zayn until Sami ‘Helluva kicks’ Shinsuke in the face then runs back to the ring to beat the count out for the win.

The Usos and Roman Reigns come face-to-face with RK-Bro and Drew McIntyre towards the end of the night. Drew convinces that he and RK-Bro need to work together to squash the Bloodline, then they use Reigns’ famous words: “Acknowledge me!” as a rising joke at imitation. Or an insult because McIntyre acknowledges that Reigns is “a piece of crap walking this damn Earth.”

The Bloodline show up, the weasel Paul Heyman offers Reigns a microphone, but he throws it away seconds later. They begin to march their way towards the ring with clear intentions on cracking each other’s bones.

Soon after, they all enter into a brawl of fisticuffs and kicks to the groin. The twins manage to flick RK-Bro outside the ring as Jey attempts to help Roman by removing McIntyre. Drew pushes Jey into the turnbuckles giving Reigns the opportunity to ‘Superman punch’ McIntyre in the face.

Riddle shocks Jey with an ‘RKO’ then Randy ‘RKOs’ Jimmy and McIntyre brings Reigns into ‘Claymore Country’ as Roman lays there completely dumbfounded.