Raw report: Go-home show fails to generate much anticipation for this weekend’s Backlash 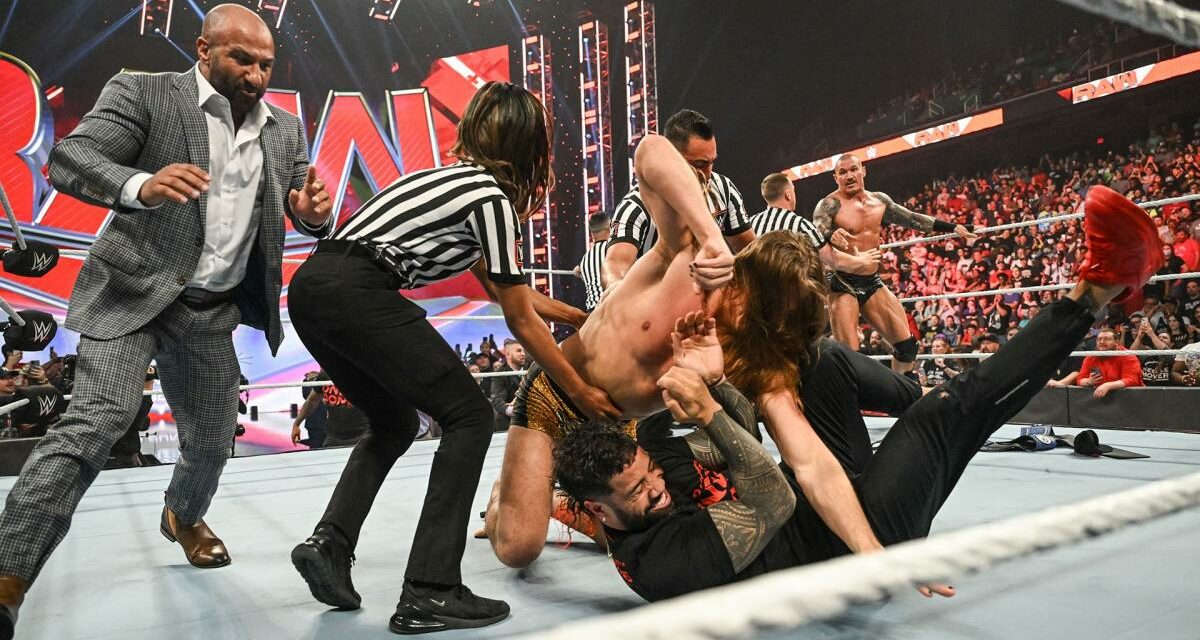 WWE has seemingly lost the thread of its WrestleMania Backlash story. The team tag unification battle that was to pit RK-Bro against The Usos has become a six-man tag featuring exactly nobody that fought at this year’s WrestleMania, and not for any seemingly good reason.

Well, now they have one week to promote the heck out of this main event catastrophe-in-waiting, so Raw struts out The Bloodline right away to do just that. As Roman Reigns, The Usos, and Paul Heyman stroll to the ring, I’m amused by the kid with the Lillie doll in the front row, and decidedly unamused by Corey Graves’ seemingly endless uttering of Reigns’ catchphrases.

Fortunately, we’re spared a long Reigns promo as RK-Bro jump The Usos from behind with stereo RKOs (and yes, I realize the irony in the statement that Randy Orton brought a little excitement to a segment). Orton and Riddle call down McIntyre who stares down Reigns in the center of the ring. They scrap until The Usos get back in the fight and all six scrap it out. Normally, this is where Teddy Long, Adam Pearce, or someone like that emerges with a great idea to make this a tag match later in the show. Instead, it goes nowhere and they’re all gone when we return from commercials.

Speaking of classic matchmaking though, a pre-taped argument between Ezekiel, The Street Profits, Kevin Owens, and The Alpha Academy sets up another six-man tag match for right now.

Gable begins by trading dodges with Dawkins until Ford tags in and Chad goes down with a tandem-flapjack. Gable unloads a sort of Phenomenal Blitz on Ford before cinching in a tight-looking arm bar. Otis tags in and takes multiple dropkicks by all three opponents going into a break.

Upon return, we’re back to Ford and Gable as Chad catches a blockbuster and turns it into a bridging pin. Owens tags in and beats up on Ford with a senton and springboard moonsault, while also throwing crotch chops in Ezekiel’s direction. Elias’ younger brother gets the tag and goes to work on all three heels in succession to the delight of the crowd. Things get messy when Otis breaks up a pin before tossing Ford over the ropes, only to be sent to the floor himself by Dawkins — who then takes a superkick from Owens.

As Ezekiel and Gable are legal in the ring, Owens trips his current nemesis behind the ref’s back, allowing Gable to cradle Zeke up for the win.

Coming back from the next break, AJ Styles is with Kevin Patrick, revealing that Styles will face Damian Priest tonight and, if he can beat him, Priest will be banned from ringside on Sunday’s match between Styles and Edge.

After reviewing the events from last week between Bianca Belair and Sonya Deville, Adam Pearce announces a six-woman tag match for tonight (wow, they’re popular), during which Deville will hold no executive powers.

Byron Saxton starts the match by talking to Hansen, asking him why he would want this match. Hansen touts his hometown pride and says he’s about to fulfill his dream. After several knees to the gut and a Million Dollar Arm clothesline, Mahaan decides to end things with his cervical clutch.

As is his wont, Mahaan continues his attack with another clutch as Hansen is strung between the ropes and living the dream.

Before Styles makes his entrance, Edge gets on the mic, knocks the fans, and warns Styles to stop this mission before he gets really hurt. Styles marches down to the ring seemingly unfazed.

Priest hits several big punches and a Broken Arrow while Edge continues to jaw it out with the front row fans. Priest and Styles both tumble over the top rope, allowing AJ to slip back in the ring and launch himself into Priest with a forearm. Moments later, though, Priest throws Styles like a lawn dart into the ringpost, sending us to a break.

Coming back, Styles is slipping out from a superplex as someone holds up a “Sign Fresh Prince” sign. I don’t know, Will Smith seems like more of an AEW move. Styles executes a rack bomb, followed by a backbreaker by Priest, and then a Pele Kick by Styles sets up a Phenomenal Forearm which Priest catches and turns into his South of Heaven chokeslam.

Styles catches Priest with a roll-up for the victory, but Edge immediately jumps into the ring and assists in a beatdown of his Sunday opponent.

As Edge and Priest set up a Con-Chair-To, Finn Balor rushes to the ring in support of Styles and helps to clear Judgment Day out of the ring.

Backstage, Cedric Alexander approaches MVP and suggests that there might be a spot for him to join up with his former Hurt Business leader again. MVP says he and Omos will watch him take on Bobby Lashley tonight and see what he’s got.

MizTV is next, and the host welcomes Mustafa Ali with an opportunity to explain his return to action. Ali’s theme song cuts short and his mic is not working, which allows Miz to simply talk over him uninterrupted. Ali grabs Miz’s mic and throws a few insults around before Austin Theory joins the party. He announces that Ali gets a Championship Contender’s match for the United States Championship tonight.

As I’m getting ready to talk about how stupid Championship Contender’s matches are, Austin reveals the detail that the match is a handicap contest against both himself and The Miz.

Ali takes an ugly spill early as he Theory pulls up the ropes and sends Mustafa out to the floor and landing flat on his back. Back in the ring, Ali escapes a headlock with a chinbreaker, and accepts an Irish whip from Miz to dropkick Theory from the apron to the floor.

A rolling neckbreaker from Ali nets a two-count on The Miz, but as Theory grabs Ali’s foot it allows Miz to use a Skull-Crushing Finale for the win.

As Ali stares out at Miz and Theory while they head up the ramp, Tommaso Ciampa attacks him from behind once more.

A clip from earlier today sees more shenanigans featuring the 24/7 title. Nicki A.S.H. wins the title from Dana Brooke, and tells Reggie that if he wants to save their marriage he will get her a rematch for the title tonight.

Tamina, Tozawa, and R-Truth are at ringside as well. Because this is for the 24/7 title, does that means it’s inherently a Falls Count Anywhere match? Nikki catches Brooke behind the ring apron and lands several punches, but Brooke soon hits a swinging neckbreaker and this is over quickly.

Not all is well for Brooke, though, as all sorts of people try to pin her immediately after the victory — including Reggie. Heartbroken and betrayed, she tells him she wants a divorce. These, truly, are the days of our lives.

Kevin Patrick meets up with Becky Lynch who is furious with Asuka, and promises to end her.

Next up is a Seth Rollins Appreciation Celebration: both for and hosted by Seth Rollins. It’s just him in the ring talking great things about himself, and he’s enjoying his moment in the spotlight before the crowd starts chanting for Cody Rhodes. Rollins chastises the crowd for forgetting just how good he is. He tells the crowd to get ready for a montage of his successes, but instead we get an entrance by Rhodes which infuriates Seth.

Rhodes calls Rollins’ colourful outfit for the night a “hideous Johnny Polo get-up”. Rollins goes lower by referencing Dusty’s egomaniacal and delusional personality, just like Cody, before throwing the first punch but ultimately taking a Cody Cutter for his efforts.

Seconds into the match, Omos’ music hits and distracts Lashley enough to allow Alexander to land some cheap shots. MVP and Omos do actually wander down, with MVP talking smack the whole way. Alexander continues beating on Lashley until Bobby turns the tables and runs him hard into the ringpost on the outside. In the ring, Lashley turns Alexander inside out with a spear before getting a submission via The Hurt Lock.

Sarah Schreiber hears Liv Morgan’s side of the break-up story between her and Ripley. Morgan says she believed in their team, but is ready again to prove herself on her own.

Backstage a bit later on, R-Truth is consoling Reggie until he finds out at there was no pre-nup in the marriage and offers his service as a divorce attorney. Perhaps more importantly, they pass by a sullen-looking Nikki A.S.H. just before Doudrop arrives and asks her if she’s ready to start taking things more seriously again. Nikki nods.

We’ve got about fifteen minutes for what is likely to be a messy affair. Early quick tags end up pitting Bianca Belair against Rhea Ripley. Bianca hoists Ripley up for a suplex, but Rhea wriggles away and attacks Morgan on the apron. Liv tags in but doesn’t get much time against Ripley before she’s dealing with Lynch and kicking out after a standing elbow drop.

Morgan drops Lynch with a missile dropkick but is soon out on the floor attacking Ripley. Lynch follows her, throws her into the ring, and hits a leg drop from the top rope before a break. Upon our return, Ripley is throwing Morgan repeatedly to the mat before tagging in Lynch who tries a Manhandle Slam. Morgan escapes and two tags bring in Belair and Ripley; Bianca hoists Ripley up for a suplex, marching around the ring for a bit while holding her up.

A tandem superplex by Ripley and Deville turns the tables on Belair, but Belair makes it to her corner and brings in a fired-up Asuka, and then everyone takes their turn coming into the ring with big moves until Morgan finishes with ObLIVion on Deville for the win.

You’d be forgiven for forgetting that there’s a “Premium Event” this weekend. Yes, there were ramifications (such as Priest being banned from ringside on Sunday), but nothing tonight felt like it really mattered. The “two steps forward, two steps back” pattern continues for the WWE.