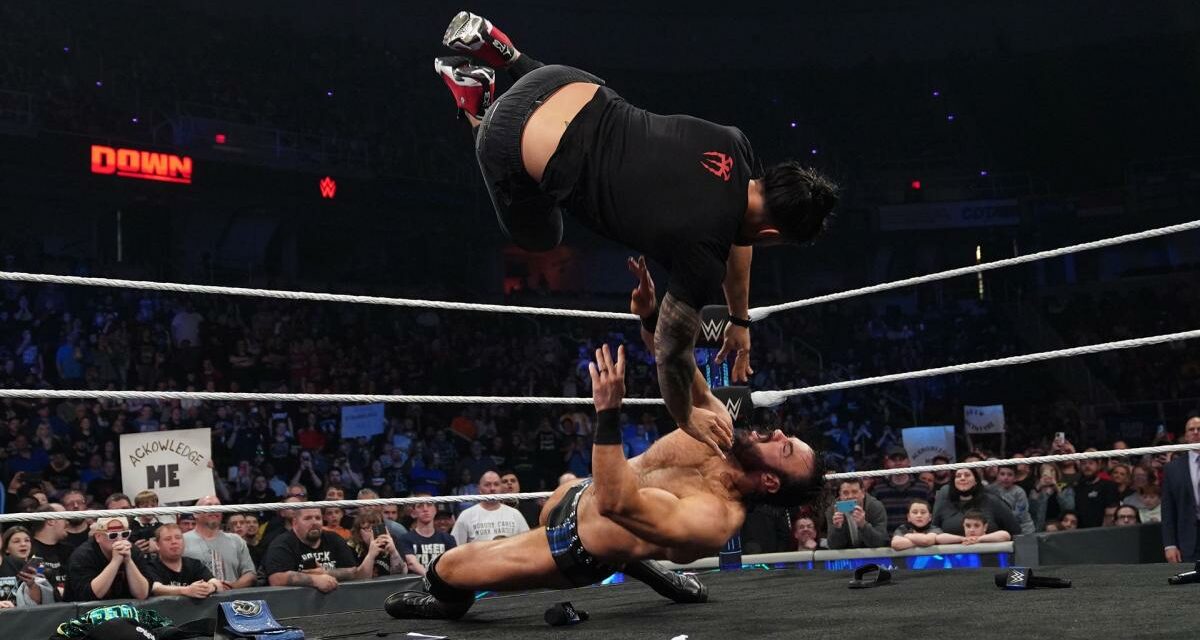 There’s going to be awkward grimaces, leaking sweat and petty remarks. On to the brawling!

Tonight, McIntyre finally gets his hands on Zayn during this cage match. Zayn has been doing nothing but escape his prior matches against McIntyre for the past three weeks. He scurries like a mouse. Unfortunately, the title “rat” has been taken by Paul Heyman, folks.

Zayn gets booed during his entrance, not surprising.

As soon as Sami arrives in the cage, he kept stalling until McIntyre grabs him by the back, throws him to his ass and slams the cage door shut with a smirk. Or the Devil’s grin.

McIntyre slaps Zayn in the chest so hard that not only his chest turned red, but the thud was louder than any other slap so far this year. Sami retaliates by hitting Drew’s face against the cage and power bombing his opponent into the middle of the ring.

According to Slamwrestling.net, Zayn is taking advantage of this match by using Drew’s face as a fly swat. Sami kept saying he wasn’t afraid of McIntyre, all that running was part of his strategy. I beg to differ.

Sami tries to escape the cage after performing a strong kick to McIntyre’s face only for him to snatch him by his hair and drag Zayn back into hell.

McIntyre pulls a superplex from the top of the cage, brings Zayn into ‘Claymore Country’ for the win he’s been waiting for for three weeks. Good on you!

Kayla Braxton welcomes Charlotte Flair for an interview backstage after last week’s… embarrassment Ronda Rousey inflicted upon Flair with her own kendo stick. Flair is so sure that Rousey will say “I quit” long before WrestleMania Backlash. I’m surprised Ronda didn’t show up and ambush her.

Happy Corbin comes out tonight for his solo act without his cackling “lackey”, Madcap Moss, for Happy Talk. Let’s see if he’s capable at being less annoying. Probably not.

Nappy here believes that tonight’s talk has improved. Apparently, Moss’ Andre the Giant Battle Royal trophy is Happy’s guest star his going to attempt to destroy. Madcap shows up in disguise to beat the living hell out of Corbin. It’s a shame he didn’t get the chance to use that sledgehammer on Corbin because he ran, of course.

The announcers are sure that Shanky is manhandling Ricochet. So far, I think they’re right.

Ricochet is used to fighting tall, meatheads like Shanky. But he wasn’t as swift at the beginning of the match. Although, that’s where we’re going to be shocked.

Rico attempts to jump Shanky from the top rope, but Jinder pulls his leg as a distraction. Shanky grabs Rico and prepares to splat him down onto the mat, yet he waits for too long giving the Intercontinental Champion the chance to flip him over for the win.

Tinder gets upset that Shanky lost and starts shouting at him, but Shanky has had enough and leaves Tinder in confusion. Hmm, didn’t see that coming. I guess he’s been deleted.

This is Rodriguez’ debut match on SmackDown and a beautiful one at that.

She was able to carry her opponent with one hand while flexing like it’s nothing. Amazing woman indeed. To be honest, I couldn’t pay attention to her advisory. She was kind of transparent.

Rodriguez catches Cat’s leg in an attempt at knocking Raquel out, lifts her up and plummets her down for the win. She is flawless!

Lacey Adams does her fourth personal narration story with the fans tonight. A mother, daughter, wife, military soldier and headstrong woman delivers her final piece of her life.

RK-Bro arrives at SmackDown for the Unification Tag Team Championship signing with the Usos.

Randy Orton calls Jey the right hand man while Jimmy is left with being called a b*tch in order to differentiate the twins. A fight breaks out between the tag champions.

Roman shows up, rips the contract and shoves it into Riddle’s mouth.

Drew McIntyre, of all people, makes in appearance  to start a stare down with Roman Reigns. The next thing you know, McIntyre and Reigns are throwing punches and Drew suplexes Reigns, having him retreat in disarray. I was dumbfounded too. My prediction is that RK-Bro will team up with McIntyre.

To my giddy ability to see the future, ‘the rat, weasel and snake,’ Paul Heyman confronts Pearce after the altercation to force his hand into accepting the unification fight as a 6-men tag match between the Usos and Roman Reigns vs. RK-Bro and Drew McIntyre at WrestleMania Backlash. Heyman even uses the ‘tribal chief is upset’ crap to get his way.

It was made official that at WrestleMania Backlash, the Usos and Roman Reigns are going up against RK-Bro and Drew McIntyre.

Shayna tries to place Naomi into a submission move twice but fails.

Naomi manages to swerve away from Shayna’s attack by latching her ankles onto Shayna’s shoulders, shoves her ass into Shayna’s face and throws her backwards.

Naomi snatches a win by allowing Shayna to land into the turnbuckles followed by a roll up. After the win, Natalya attacks Naomi from behind. Sasha Banks enters to assist her partner only for her to get her knee slammed onto the edge of the ring and forced to watch Shayna break Naomi’s arm by stomping on it.

Where is Butch? After his lost against Xavier Woods, he ran away like a petulant child. He could be at cochella, maybe Jupiter, or even the spa. Who knows?

Sheamus is WWE’s resident thot for having so many partners during his run in the industry. He is now known as “Shake it Sheamus” instigated by Xavier Woods and Kofi Kingston prior to the match.

As the fight is happening, Woods jumps from the top rope, but Holland evades and performs a marvellous throw over his shoulder. Ridge catches Woods mid-air and crashes him down.

But Xavier does a roll up move out of nowhere after escaping an attempting plummeting maneuver by Ridge for the win.

Kofi flies onto Sheamus outside the ring twice at the start. He goes for his ‘SOS’ move, but gets stopped by Sheamus with his ‘Irish Curse Back Breaker’ move, which has been inflicted upon Kingston three times. One for Holland, another for Sheamus and the last one for Butch. Wherever his ass may be.

Sheamus doesn’t go for the finish just yet, he wants to punish Kingston first by rolling him onto his back, grabbing him by the mouth and pull.

Sheamus calls for the ‘Bro kick’ move, yet Kingston avoids it and caught Sheamus into an ‘SOS’. Sheamus kicks out, unfortunately for Kofi.

Kingston attempts, again, to jump from the top rope, and Sheamus knees him in the face then ‘Bro kicks’ Kofi for the win.

“Sheamus said: ‘that’s how you do it, lads!’” said Pat McAfee

Then they proceed to hurt Woods by colliding him with a table Sheamus retrieves from under the ring.

Ronda Rousey vs. Shotzi and Charlotte Flair vs. Aliyah – “I Quit” Match

Shotzi starts the match by running away from Rousey to waste time for Ronda.

Ronda grabs onto Shotzi’s leg and flips her causing her to hit the mat face first.

Ronda takes Shotzi’s leg once again for the ankle lock and adds further pressure by latching her legs around her opponent’s for the win as Shotzi screams: “I quit!” in 1:41.

Now, it’s Flair’s turn to make Aliyah say “I quit.”During this match, Aliyah was actually a formidable fighter tonight as she resisted the urge to utter two winy words. She fought back with finesse.

Flair does her ‘Figure Eight’ move to force Aliyah to say “I quit”, but she doesn’t, even after the clock runs out allowing Rousey the complete win.

Because she lost and felt the need to take it out on someone, who better than Drew Gulak? She angrily demonstrates how to ring a bell to Gulak and the fans. After that, she runs into the ring with the bell and annihilates Gulak’s neck with it. Poor man, and it was his birthday this week too.