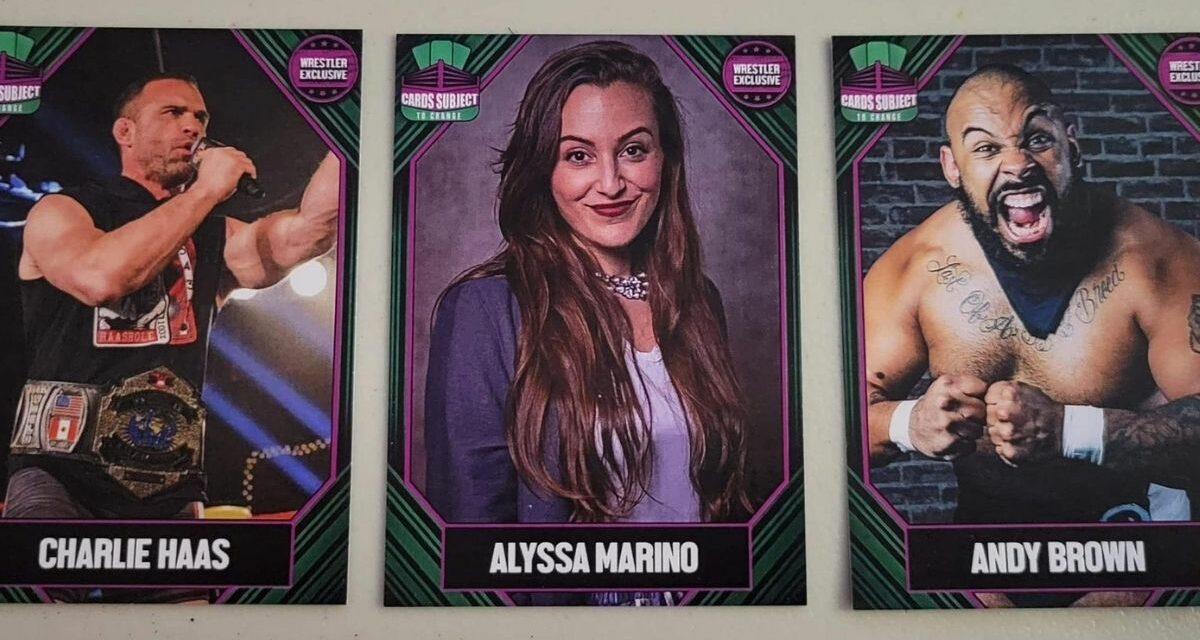 On January 19, 2022, the Twitter account for Cards Subject to Change (@CardsSubjectTC) shared an announcement made by professional wrestler Anthony Greene (@alternative_ag):

I (Anthony Greene) will be working alongside Cards Subject to Change on this passion project to bring wrestling fans and collectors a brand new series of professional wrestling trading cards. Featuring stars from the present and future. Some that you’ve watched on your television for years as well as some of the hottest rising stars on the independent scene. We’re going to bring back the fun of collecting. No hobby boxes, no pack will be the same, autographed cards, specialty cards, and more!

Since this announcement in January, Cards Subject to Change has strategically revealed the impressive checklist for its new set of wrestling cards, with more wrestlers to be announced, as well as the design of the product, steadily increasing excitement for what looks to be one of the most anticipated independent wrestling card sets of 2022.

Cards Subject to Change is essentially Todd Graham, who wrestles as Derek Simonetti. Graham is quick to credit Greene, who “was very integral in getting us where we are because he named the company, was one of the first customers, and [he] brought me to the attention of many people.”

Before Graham started designing and creating professional wrestling trading cards, he was a fan and a collector. “I was born in 1986,” Graham told SlamWrestling.net, “so I grew up in the ’90s when trading cards blew up. I discovered wrestling at four or five years old and collected just about anything wrestling when I was a kid, including their trading cards, so I collected WWF and WCW cards when I was younger.” 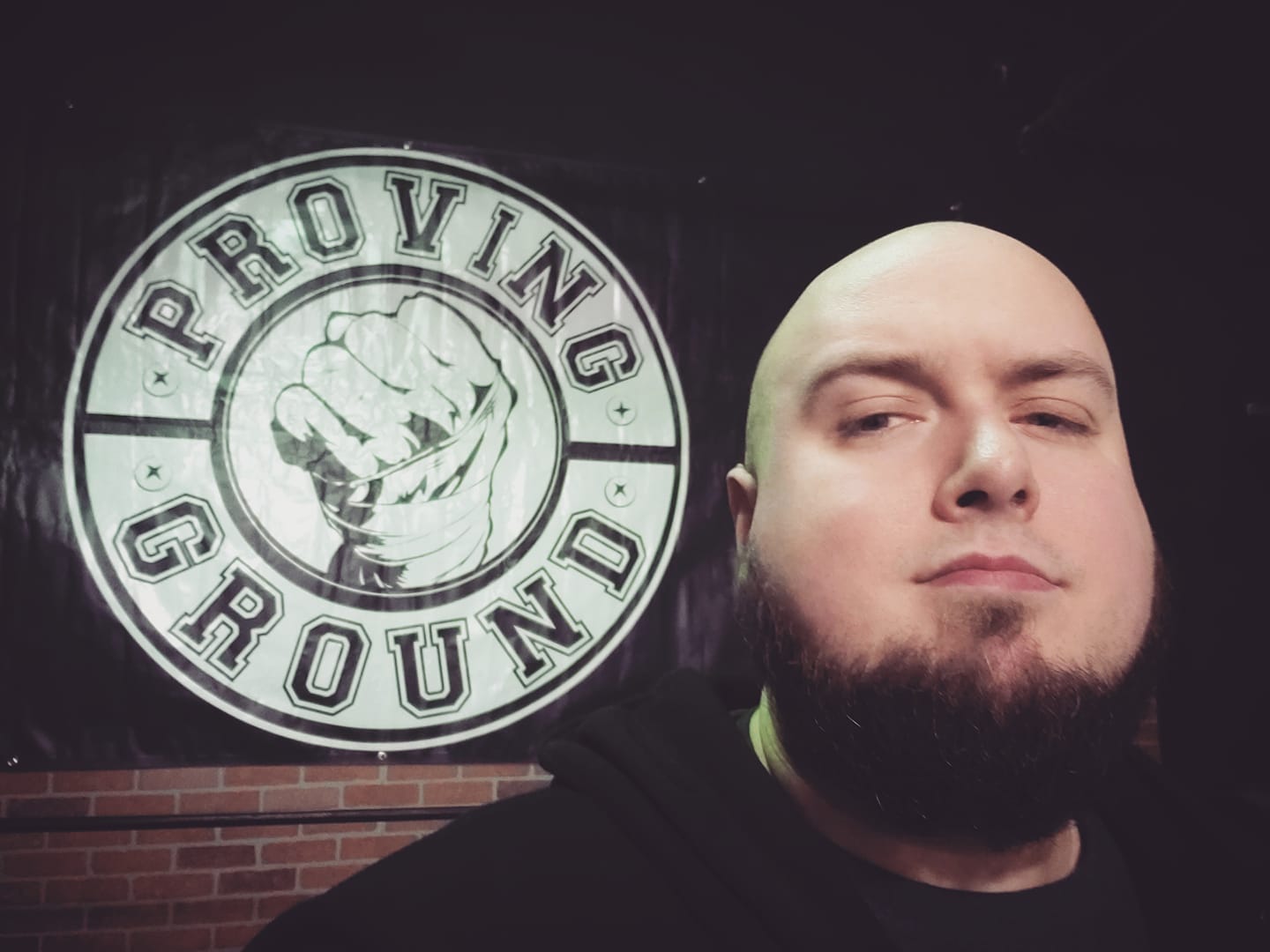 But how did Graham begin creating wrestling cards of his own? He says it all started as a “booking tool.”

“I am the owner of an East Coast wrestling promotion called the Proving Ground (@ProvingGroundHD), and real early on, I made this single deck of trading cards of all the wrestlers on my roster, and I used it to help me figure out matches and who was already used and this and that,” recalled Graham, who worked in Technical Support until the Summer of 2020. “I didn’t like how they looked, but I still have them. I then refined the process, and got the attention of Anthony Greene, and we did a couple nine-card sets with him. This brought us to the attention of Limitless Wrestling in Maine, and we are about to do our fourth series together.”

Graham had to learn how to make trading cards somewhere, and noted that he’s been using Photoshop since the early 2000s, and he was “always the guy who did the graphics.”

“It came with the territory when I started learning how to edit video, exclusively wrestling, since 1999. Over time, I learned new tricks, and new techniques, and I am still learning as I go, but the quality of my output is always getting better or at least being good enough to pass as professional,” he said. Graham developed a list of things he liked, and didn’t like, in the graphics and worked towards making sure he always put out something that stood up to his standards. For his trading cards, he began by mimicking a previous card style, almost as an homage, and he was able to do that because of his years of experience with Photoshop.

Amidst the recent boom of wrestling card popularity, the Limitless card sets are among the most coveted independent card sets in circulation today, featuring the very first trading cards of many popular wrestlers before they were signed by AEW, Impact, or NXT/WWE.

Graham is aware that many of the Limitless cards he personally created have become quite valuable, and although he’s amused by this, he remains “completely unmotivated by the rising interest in trading cards.”

“I have seen some of my cards on eBay going for a lot of money,” Graham said. “One card even got graded through one of the top grading companies. If only they knew it was just one guy with a big pair of scissors and a lot of passion for the wrestling business.” 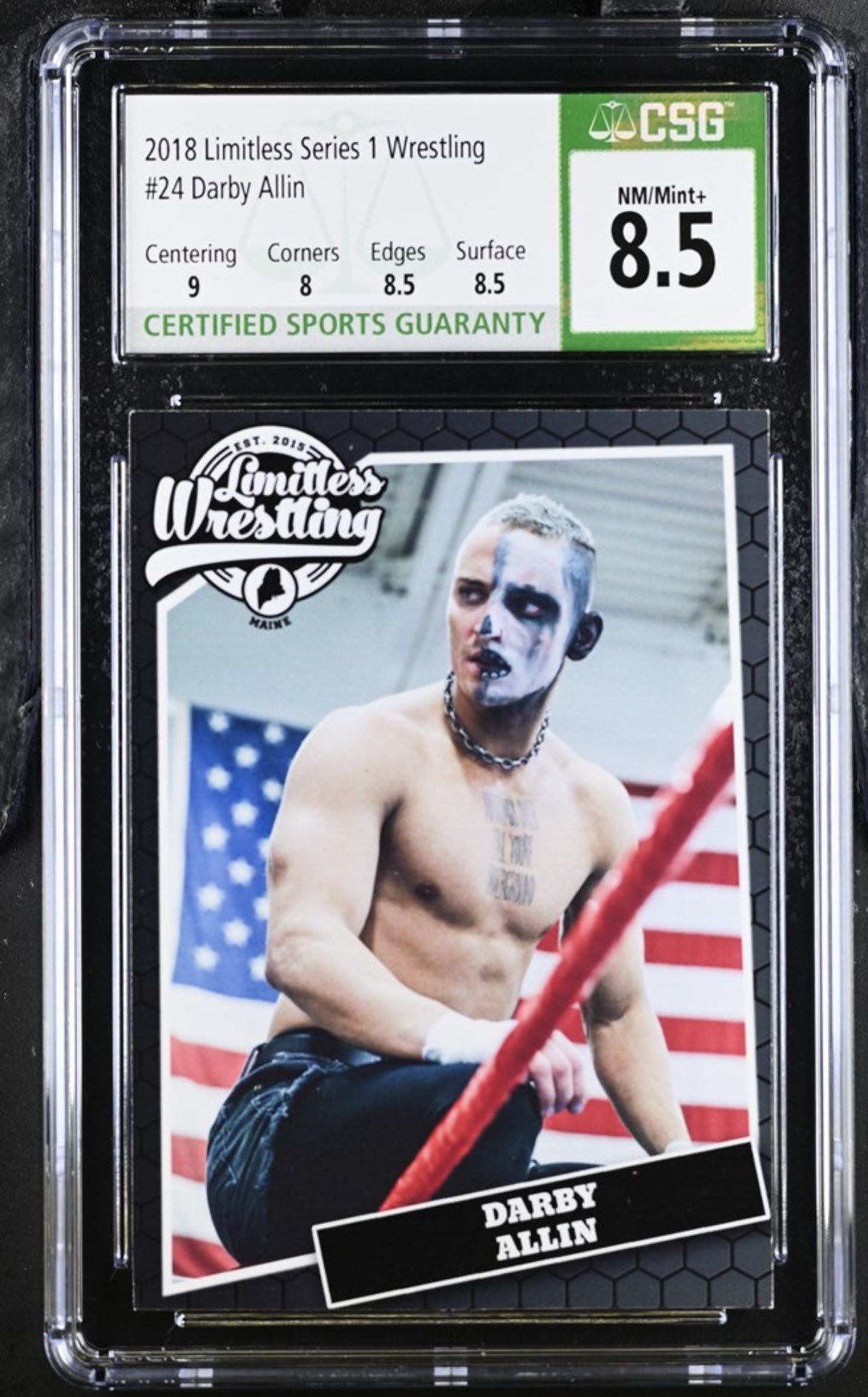 Edkins shared how he became an independent wrestling card super collector: “I first bought the GCW Spring Break sets on the advice of fellow wrestling card collectors early in my collecting journey … I had stopped watching WWE and began watching GCW and AEW mostly. Because of this I was trying to find cards of my favorite wrestlers on the Indy circuit and kept falling down the rabbit hole.”

And how did he become a fan of Graham’s Limitless card sets? “My favorite part of the Limitless sets is what makes every iconic wrestling card set — the lore,” said Edkins. “These sets are jam-packed with first cards of big-time talent and there is an air of mystery around them that makes them addictive to collect.”

Edkins, who was born and raised in North Carolina and currently works in education, is a vocal enthusiast of Graham’s Cards Subject to Change set. “I’m most excited to see how [Cards Subject to Change] innovates on independent cards,” said Edkins. “Most of the Indy sets have followed the same format of 30-card base set and maybe a chase card. CSTC has already mentioned the possibility of variations, autographs, and serial numbers, and I believe this will continue to build on the great foundation Indy cards already have.”

With the anticipation for his new set of cards, Graham described the inspiration behind the concept for Cards Subject to Change.

“The official Cards Subject to Change set was genuinely Anthony Greene’s idea as a whole. When he got released from the WWE, we reconnected and he had this aspiration to have a set of cards featuring Indy wrestlers who are either currently on the come up or about to break out, and in some cases, some legends in the wrestling business, as well,” said Graham. “We have a little bit of everything in this set. We started talking about logistics, and as far as a name, we decided on Cards Subject to Change, so once again, Anthony was looking out for me and my card business that he put our logo on every card, so you knew where the cards came from. We came to a business agreement that was mutually beneficial and now we have this set that is getting a lot of attention.”

Graham said Greene was in charge of picking out the talent, making use of “his relationships with all the wrestlers he’s met over the last decade.”

“[Greene] had his pick of who he wanted in this set,” Graham said, “and as you can see from the roster of wrestlers, he was able to get some pretty heavy hitters.” 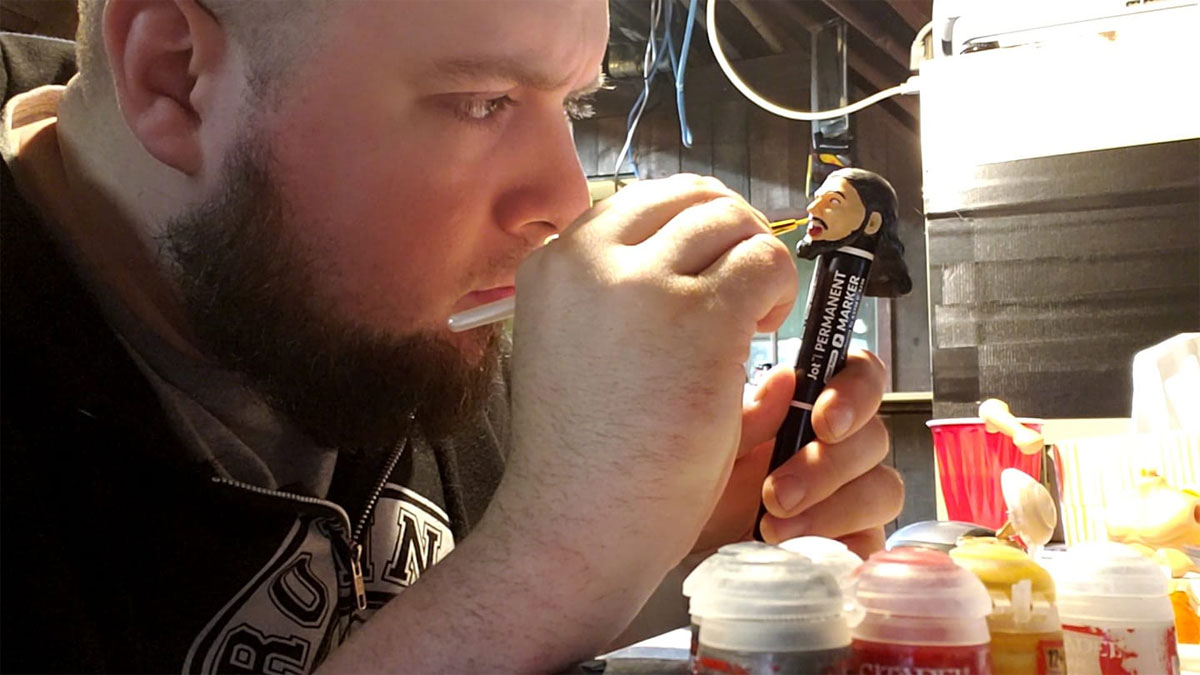 Todd Graham hard at work on a unique figure.

“The checklist for the set has been finalized and all needed agreements are in place. … The base set is 64 people. We have announced a lot of people in this set already, but we still have quite a few to announce,” explained Graham.

As excited as wrestling fans and collectors are for the Cards Subject to Change base set, one of the things that are typically absent from independent wrestling card sets are the types of bonus cards and inserts that are commonly found in mainstream products, so Graham made sure to create some of these extras for his new set, including autograph inserts (limited numbered cards with genuine autographs), variants, and “a few other cool things” that he didn’t want to spoil.

In addition to the official Cards Subject to Change trading card set, Graham recently announced that he was actively taking commissions for independent wrestlers, to make their own trading cards. Graham said the cards are great at the merch table, because trading cards “are inexpensive to purchase, which means they can be priced in a way that the fans can afford to collect, and the wrestlers can still make money on them,” he said, adding, “We have also reached the 30-year nostalgia window for people who collected trading cards in the ’90s, so thirtysomethings going to wrestling shows will see trading cards and get that tingly feeling from their childhood, so I imagine that’s part of it, too. I feel genuinely blessed that people come to me to get cards made and being able to do this for the fans and the boys and girls in the locker room is very gratifying.”

Despite the recent surge in popularity of wrestling cards, they’re still seen by many as somewhat of a fringe collectible in the wrestling community (opposed to action figures, shirts, and belts). That doesn’t deter Graham, who encourages collectors to give the cards a try. “For the same reason you should be collecting anything frankly,” Graham said, “because you enjoy it.” 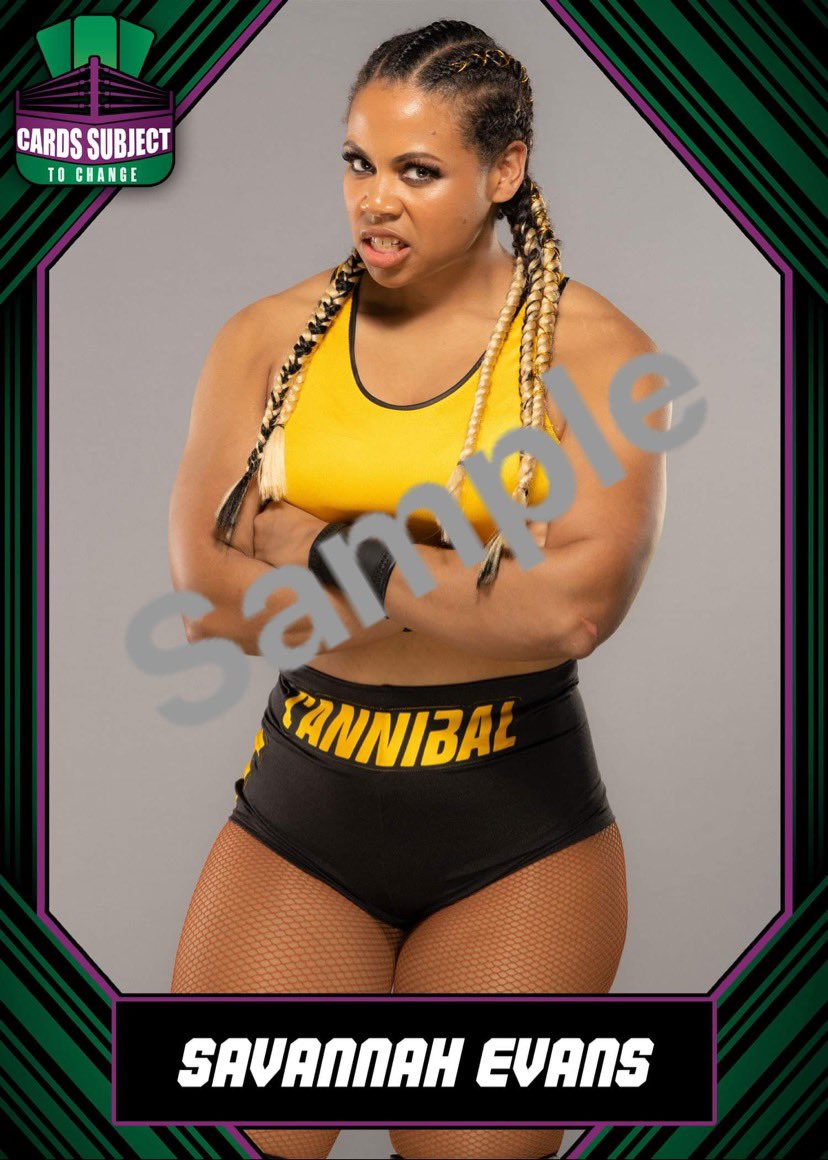 In addition to the official Cards Subject to Change set, Graham also has “a fourth series of Limitless Wrestling Cards in the works.” They also have another Proving Ground set coming out “that will feature most of the people who have ever been through the doors over the last six years.”

Graham explained, “The Cards Subject to Change brand is connected to my Toy Creating ventures, as well. The Anthony Greene Action Figure that has been floating around (limited to 100) was something I created, and I regularly create figures for my wrestling promotion (The Proving Ground), as well. … We do cards, toys, and 8x10s, and about anything you can think of for merch tables.”

In Graham’s own words, the sky’s the limit and he isn’t slowing down anytime soon. “The Proving Ground wrestling promotion, the cards, the toys, and every other little thing I do in the wrestling business — ring announcer, commentator, video editor, wrestler — has been thankfully enough to keep me living indoors … It’s kind of a dream come true working in a business I love.”