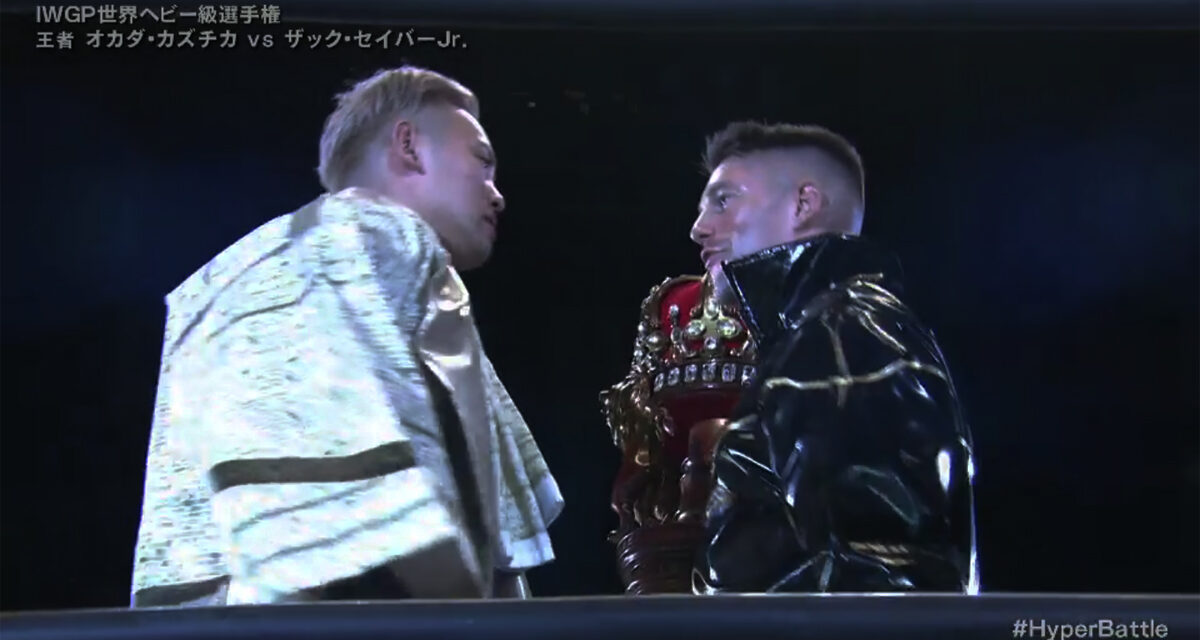 NJPW’s Hyper Battle turned out to be the biggest event for the promotion since Wrestle Kingdom back in January with six championships up for grabs.

One that wasn’t was the IWGP United States Heavyweight Championship. In the middle of the show Sanada came to the ring and forfeited the title because of his fractured left orbital bone. The injury occurred in his New Japan Cup match against Will Ospreay. Sanada told the crowd that wasn’t sure how long he would be out of action. 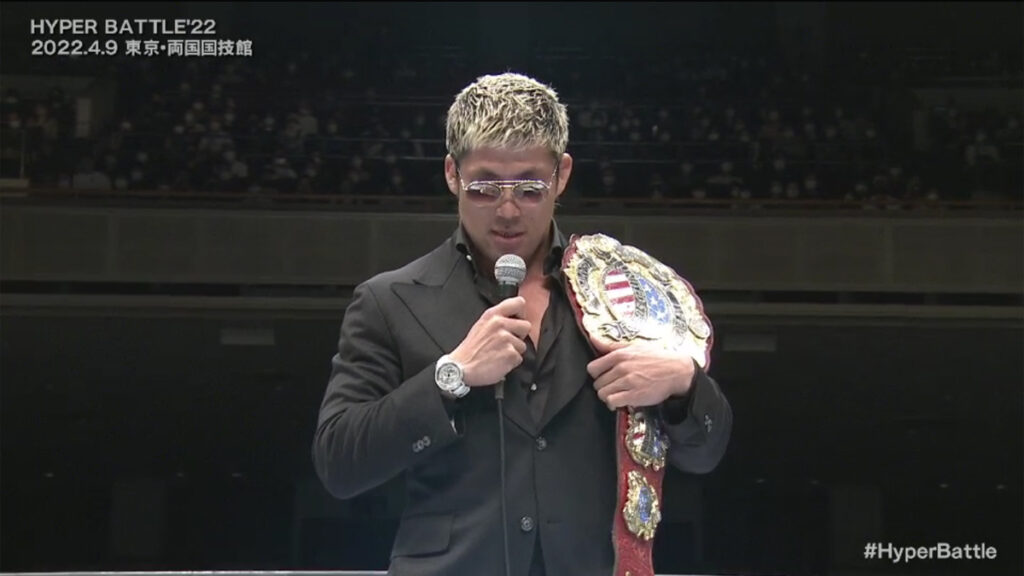 He wanted to hand the title to the former champion, Hiroshi Tanahashi. Will Ospreay wasn’t having any of that.

“I am not sorry for your eye injury. Learn to protect yourself. What you are going to do right now is surrender that title to me since I am the person who caved your f—–g face in!” Ospreay demanded.

Hiroshi Tanahashi had a better idea and came to the ring to deliver it.

“Let me tell you something. I have a good idea. We fight for US Heavyweight Championship,” he said.

For all the hype given to it, the IWGP World Heavyweight Championship was more of Okada putting Sabre Jr. in his place as a challenger rather than proving what kind of threat Sabre Jr. is or could be…in less than 30 minutes.

Okada retained with Landslide and a Rainmaker.

Two titles did change hands though as Taichi surprisingly became the new KOPW provisional champion by defeating Toru Yano in a very smartly booked , very imaginative and entertaining bout. The stipulation being there were no ropes. The way the bookers and the talent worked around that was impressive. NJPW always thinks outside the box.

The hard-working United Empire was finally rewarded with some gold as The Great-O-Khan and Jeff Cobb beat YOSHI-HASHI and Hirooki Goto for the IWGP Heavyweight Tag Team Championships as well. 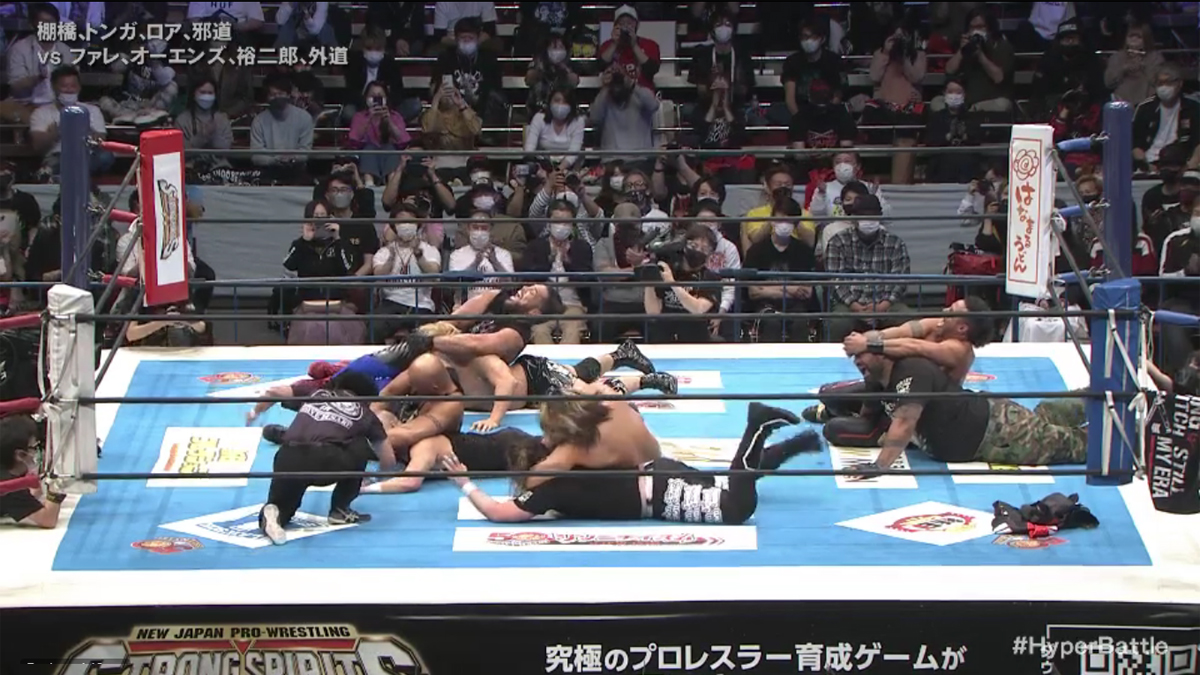 The match begins with everyone brawling on the floor as soon as the bell rings. In an amazing feat, Tonga and Loa suplex Bad Luck Fale. I cannot believe they got him up.

“I hate your face!” cries Owens before he gives Tama a running knee strike. Funny that.

The faces take a shot at Gedo as they surround him in the middle of the ring. Jado almost puts Gedo away with the Dream Killer DDT. Owens hits the running knee again as Jado has Gedo in a crossface submission. Owens distracts the official as Gedo takes out his brass knuckles. Jado blocks Gedo’s punch putting him into the crossface once again. The faces put all the heels in crossfaces. Gedo submits to Jado.

Rating: 6 /10 : The match was decent for what it was but considering the bad blood between the two factions it was very tame.

Ospreay will be battling Jon Moxley at Windy City Riot next week, a NJPW pay-per-view exclusive. Ospreay says something about Renee Paquette during his entrance but I couldn’t determine what it was due to the crowd noise. The commentators made note of it though. Ospreay tweeted this out.

Everyone is a fan of Will Ospreay especially @JonMoxley Wife.@ReneePaquette I’ll take it easy on him just for you hun. pic.twitter.com/eIiI1MPJOU

A very short match. It was only 10 minutes or so. Takagi gets the pin with a Pumping Bomber and Made in Japan. Takagi takes Henare’s sunglasses and poses with them.

Rating: 5 /10 : Not sure why they even bothered. Too brief to be memorable or meaningful.

Wato is hung up in the Tree of Woe. Ishimori and Phantasmo then pull Taguchi’s crotch into Wato’s head. Wato then falls off the top ropes so he and Taguchi are, well, laying in an awkward position. If you know what I mean and I think you do. Ouch! 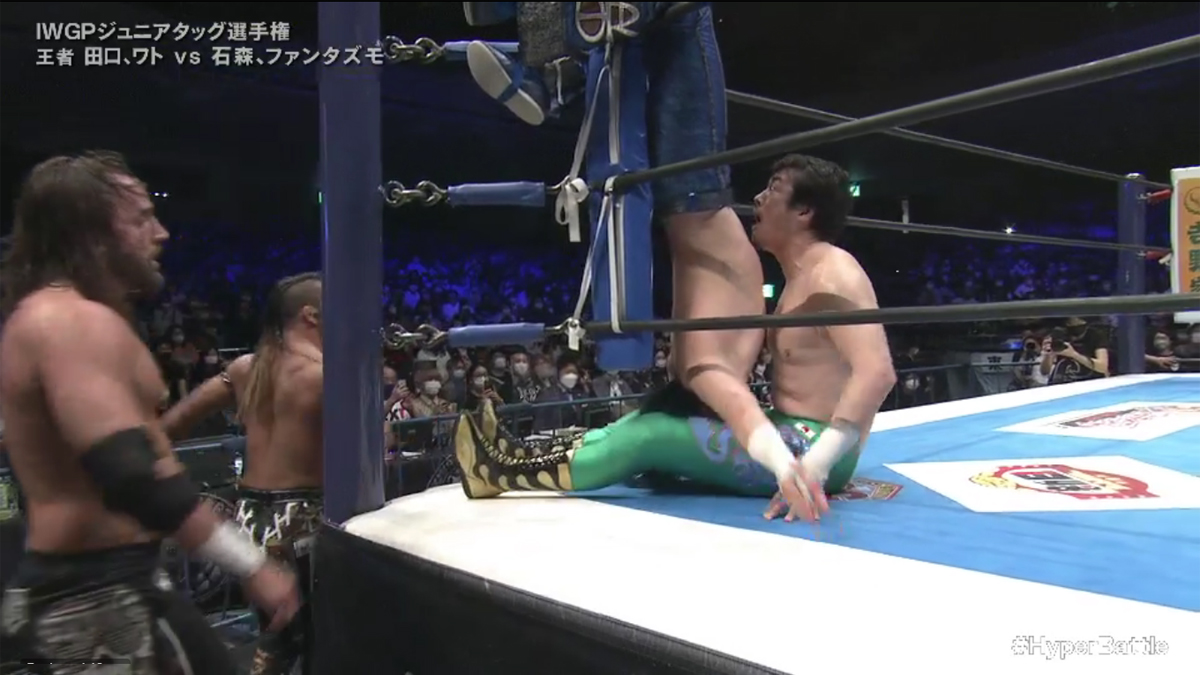 Taguchi pulls down his pants and his underwear to pin Phantasmo with a stink face roll-up.

Rating: 7.5 /10 : Well done, the ending was just a bit cheesy though. Hopefully there will be another match between the two as Master Wato really has done well under Taguchi’s mentorship. 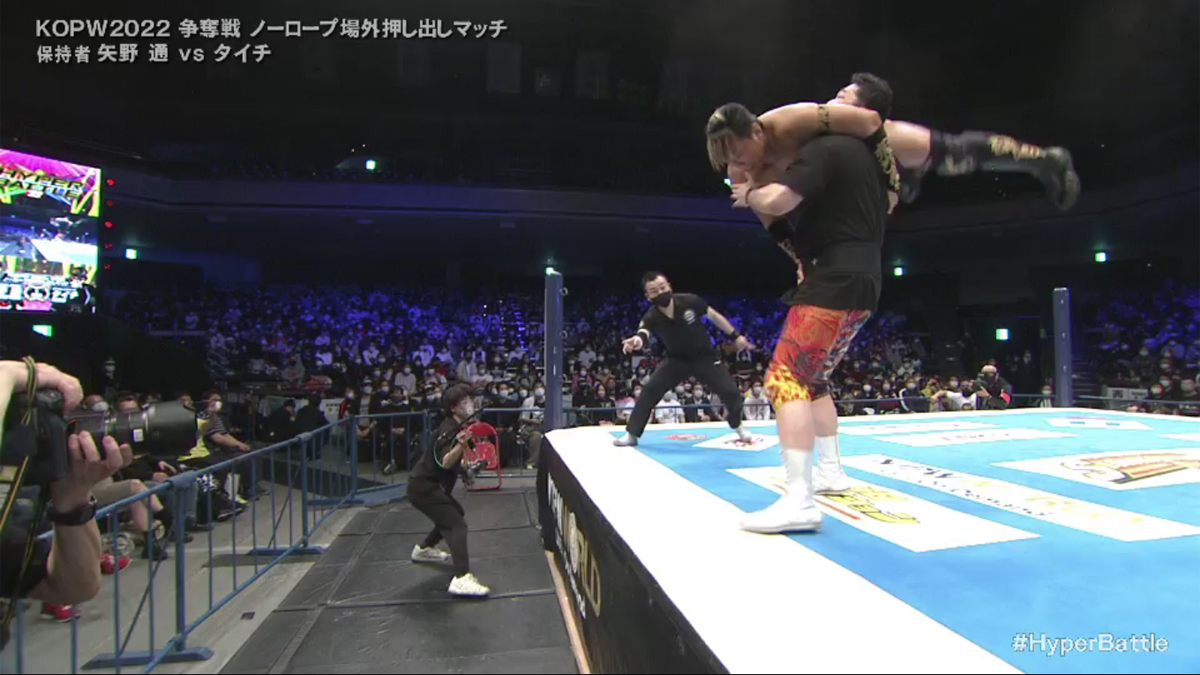 Rating: 8 /10 : A really clever match. Working without ropes isn’t easy but this match had a ton of fun, imaginative moments.

Horimu has the word “EVIL” all over his pants, trunks. Hiromu confronts Dick Togo on the floor. He dares him to punch him. The official warns Togo as Hiromu continues to antagonize and mock him behind the official’s back. Hiromu pulls Evil out of the ring, throws him into the barricade and hits him twice with wicked shotgun dropkicks off the apron and into the barricades. Hiromu suffers the Evil double chair shot on the floor. Evil distracts the official so that Togo can batter Hiromu on the floor. Hiromu pulls off a great move powerbombing Evil off the apron and into him. The crowd is solidly behind Hiromu. Evil wins with Everything is Evil after tossing Hiromu into an exposed turnbuckle. Tama Tonga confronts Evil but is attacked by Yujiro Takahashi. Loa comes to the rescue to put down the heels.

“Evil, you betrayed me! It is time for some payback! I will get my revenge!” says Tama.

Khan throws Hashi into Cobb who delivers Tour of the Islands to Hashi.

Rating: 8 /10 : A hard-fought bout. Good to see The Empire get some respect for all of their hard work as a unit. 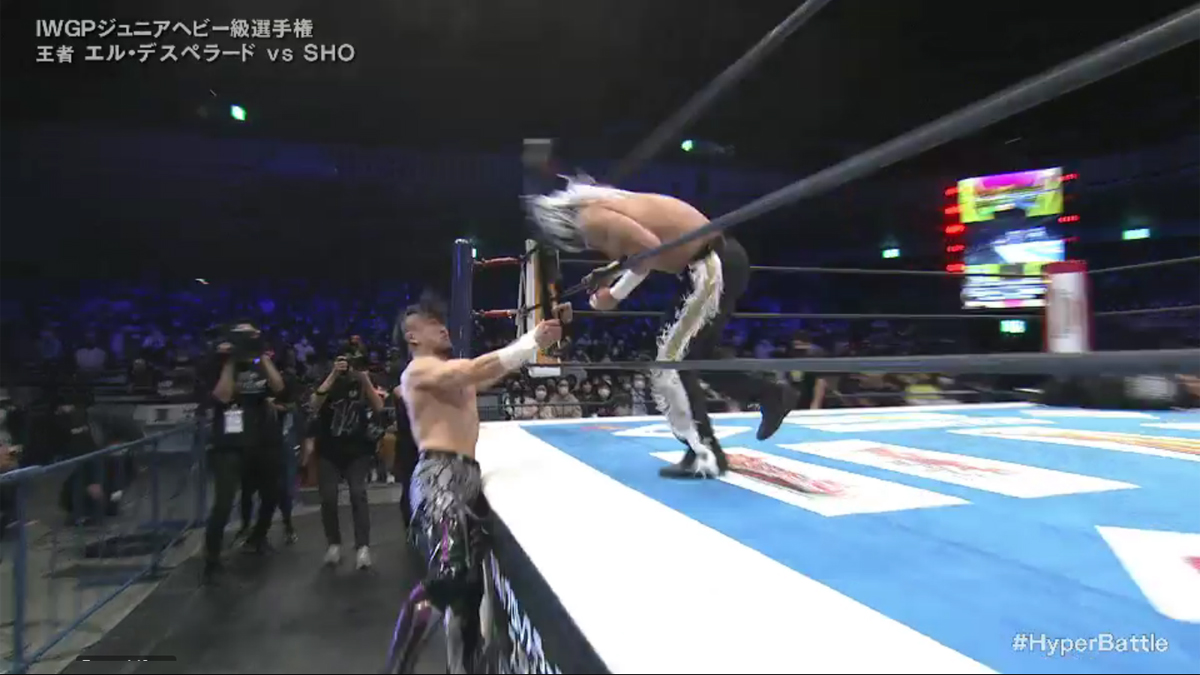 Desperado gets bonked with a steel chair. Courtesy: NJPW.

Sho attacks Desperado from behind before the match even begins. Desperado snaps smashing Sho’s head against the concrete floor. Desperado dives through the ropes. Sho nails him with a steel chair to the head as the official is down. Desperado is driven into the official. Sho hits a low-blow so he can retrieve that wrench. Desperado counters the attack spiking Sho. Desperado throws the wrench out of the ring. Desperado survives a piledriver and Snake Bite to win with Pinche Loco.

Rating: 8 /10 : Grueling, physical affair. Desperado’s reign has been a good thing as a whole for NJPW.

Rating: 7 / 10: ZSJ doesn’t put butts in seats outside of the UK. I expected this to be more of a serious threat to Okada but it wasn’t. Someone else should have won the New Japan Cup to make for a better rivalry.

NJPW gets back on track with a strong card, except for the surprisingly lackluster main event. They really need to get away from these multi-man tag team matches and present more singles matches going forward.