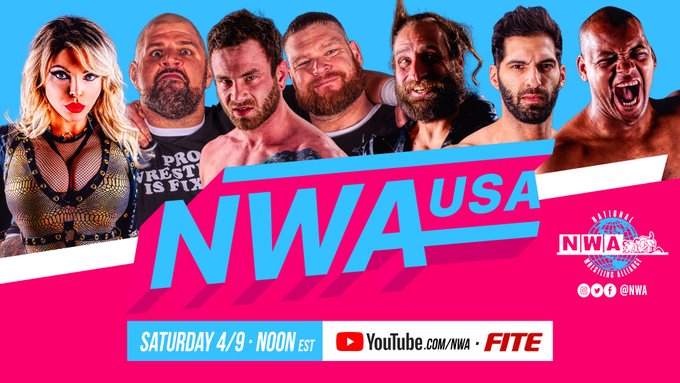 Things keep heating up in the National Wrestling Alliance on the latest NWA USA.  Last week, a backstage deal with The Fixers, Jay Bradley and “Wrecking Ball” Legurtsky, and BLK Jeez involves a tag match, with the outcome being whoever wins will have a shot at the NWA National champion, Jax Dane.  The caveat is that Marshe Rockett will have an opponent of his choosing, but not anyone from IdolMania Sports Entertainment.  Who will be in “All Day’s” corner?

We’ll find out later in the show, as May Valentine is with the personal attorney of The Dane Event, Chris Silvio, Esquire. He didn’t come to say hello, but he wants to talk about the biggest miscarriage of justice: two tag teams going for a shot at the NWA National championship. Whatever happens in this sham of a match, in his legal opinion, doesn’t count, because Jax Dane will face whoever he wants to face.

We go ringside at the Skyway Studios in Nashville, TN.  Joe Galli and Velvet Sky have the call.

At The Podium with Kyle Davis is Colby Corino. The Last Bastion says as a Corino, his name is synonymous with wrestling and championship glory. He’s gunning for the NWA Junior Heavyweight title and notes Homicide hasn’t been good against any Corinos in the past. Davis says his opponent will be in the ring, and Corino is ready to go, whoever it is. So that means your First Match of the night is…

So, a brief history lesson:  Jackson is, according to Galli, a ten-time us junior heavyweight champion, and is still wrestling at 72 years of age. As I researched Jackson, the journeyman wrestler has been referred to as the “Junior Heavyweight Champion of Alabama.”

Corino scoffs at the Septuagenarian Shooter ™ as he takes his time.  The crowd chants “Act-tion Jack-son,” and he’s able to outwrestle The Last Bastion, even getting a neckbreaker on Corino for a two count.  Jackson gets a short arm DDT and gets his arm and tightrope walks better than the Undertaker (I know it’s sacrilegious to say, but watch for yourself!) and comes down hard on Corino’s arm.

Jackson sends out Corino to the outside, and when he goes after him, he eats a slingshot spear, and now Corino is in his element, getting a Samoan Drop to his signature Colby Crush to cover, but gets a two count.  Corino goes high risk with a Swanton attempt that gets bupkis, and Jackson fires up on the upstart and sends him back outside.  Corino grabs something from his tights to knock out Jackson while the ref wasn’t looking, and he covers to get the pin for the cheap win.

The Last Bastion leaves to a chorus of boos because, as always, The Power of Douchenozzlery™ triumphs yet again.

Now it’s time for a Spotlight Shoot in Sixty Seconds ™ with “The Crush” herself, Natalia Markova.

“Hello, my name is Natalia Markova, and as you all know, I’m a pro wrestler, a model, an actress, an influencer, and just simply [the] best of the best. But I noticed one thing: Girls don’t like me, but guys do, throwing all their money at me. I like that.

And I have the answer. I know why girls don’t like me; they’re jealous. Deep inside, they know that they’re not me, and they never will be. You just need to simply accept that I’m [the] one and only. You will never be on my level. Do you know what wise people say about that? ‘That’s okay. That’s life.’ So just roll with that.

Funny, that was the same sentiment I had.

Galli and Sky discuss the main event and what the win means for the National title picture, since it wasn’t officially sanctioned.  Galli states that management is working behind the scenes to try to clear some details up, but now we head to the next match, which is… 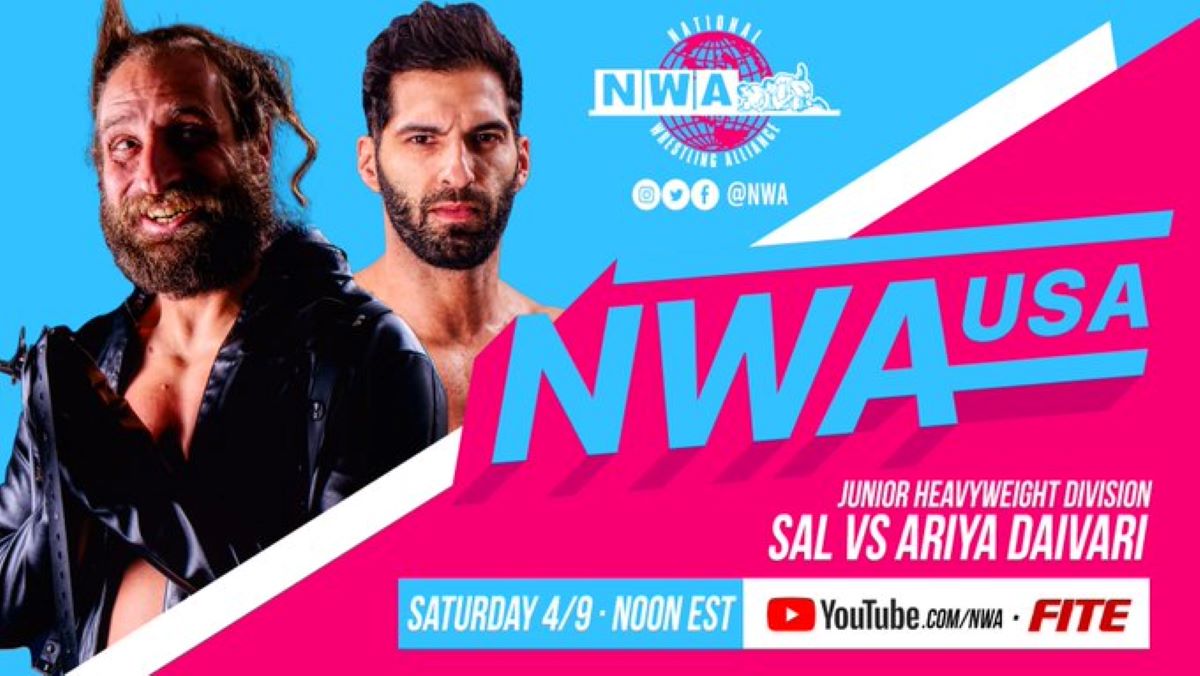 Rinauro looks a little less unhinged than in the past, as he plays mind games with Daivari to start.  He manages a roll-up and a backslider that garners Rinauro a couple of two counts.  Daivari is sick of this, and gets Rinauro in the Tree of Woe in the corner and stomps away.  Then he cinches a sleeper hold, but Rinauro fights out of the submission.  Daivari rams his head into the top turnbuckle, but it does not affect Rinauro. Rinauro goes back on the attack with a pendulum backbreaker for a two count, and then he tries a springboard Ace Crusher and still, he can’t get the pin.  Rinauro starts losing it, calling for his “father”, The Sinister Minister, and Daivari uses that time to throw his carpet in his face and land a superkick to a hammerlock clothesline. One Magic Carpet Ride by Daivari, and so long Sal.

Your Winner via Pinfall:  Ariya Daivari

Kyle Davis talks to Daivari after the match, and Daivari has a serious chip on his shoulder. He didn’t come to the NWA to play nice or wait for opportunities, he says. He then calls out Nick Aldis, because he claimed whenever he spoke to him, he only asked about his brother Shawn, and he just overlooked him.  He challenges Aldis to a match and promises that it will be humiliating when a junior heavyweight beats him.

We head backstage as May Valentine is with Ricky Morton.  She asks if his son Kerry Morton is ready for championship gold. The elder Morton is confident that Kerry has a good future ahead of him, but now is not the time for title gold.

Hmm.  Interesting words from the Rock N’ Roll Express member.  Kinda curious where this leads down the road.

As we prepare for the Main Event, Galli confirms that the stipulation of a National title shot is sanctioned.  The Fixers enter the ring first, and as Marshe Rockett comes out with BLK Jeez, they reveal their mystery partner, and now that means it’s… 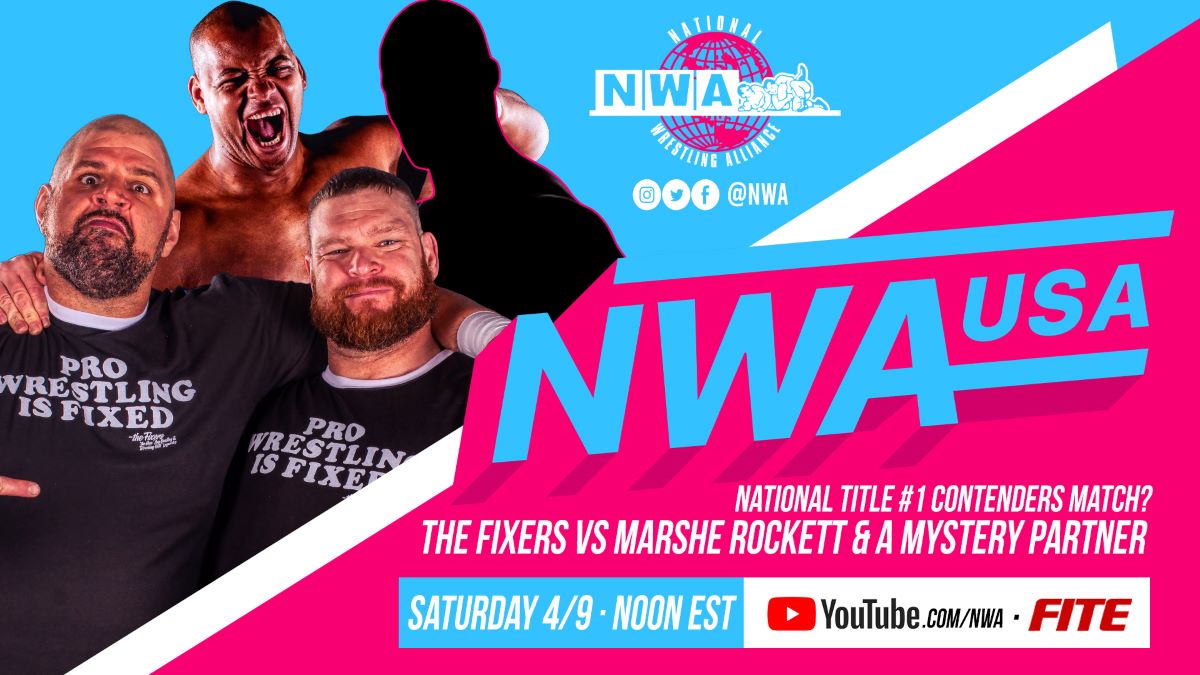 The Fixers (Jay Bradley and “Wrecking Ball” Legurtsky) vs. “All Day” Marshe Rockett (with BLK Jeez) and Jax Dane

Yes, Virginia, The Dane Event is the mystery partner for this show, and you know shenanigans will follow.

Bradley and Rockett start the match, with Dane standing on the floor and not on the ring apron to cheer his tag partner.  Rockett is getting schooled…err Fixed by Bradley, and a tag to Legurtsky adds more damage.  Rockett tries to take down the big man, but Legurtsky just can’t be knocked down.  He and Bradley use double team action to sandwich Rockett, and Rockett is hurting.  Rockett sends Bradley to the corner, and as he rushes Bradley leaps away and lands badly as his knee collapses. Rockett tags to Dane and he picks his spots going to work on the injured Fixer, by channeling “Rugged” Ronnie Garvin with a Garvin Stomp, finishing on Bradley’s knee.

Dane is in full control, but a desperation backdrop by Bradley gets the separation he needs to get the hot tag to Legurtsky, and he is a Wrecking Ball En Fuego.  The Fixers then go for a double suplex on Dane, but Rockett lowers his partner down.  As the ref sends Rockett back to his corner, Dane low blows both men in the…err, little Wrecking Balls (what?  That’s not dirty!), and gets an impressive Samoan drop on the big man Legurtsky.  He tags Rockett and he nails an equally impressive Swanton Bomb to cover, but Bradley comes in to break the count.  One Rockett kick to later to Legurtsky, and he covers for the one, two, and three.

Your Winners via Pinfall:  Jax Dane and Marshe Rockett

Since Rockett got the pin, he is now in line for a chance to face Dane for the National title.  Dane realizes this, and he eyes Rockett as the show rolls to the credits

Overall, a solid show that is becoming more story driven with each episode.  The swerve of Dane being added as Rockett partner was a good call to add more heat to The Dane Event, and The Fixers are slowly becoming more fan favorites (and I still want a “Pro Wrestling is Fixed” tee shirt!)

We’ll have to check next week’s fallout of the main event, so see you in seven!