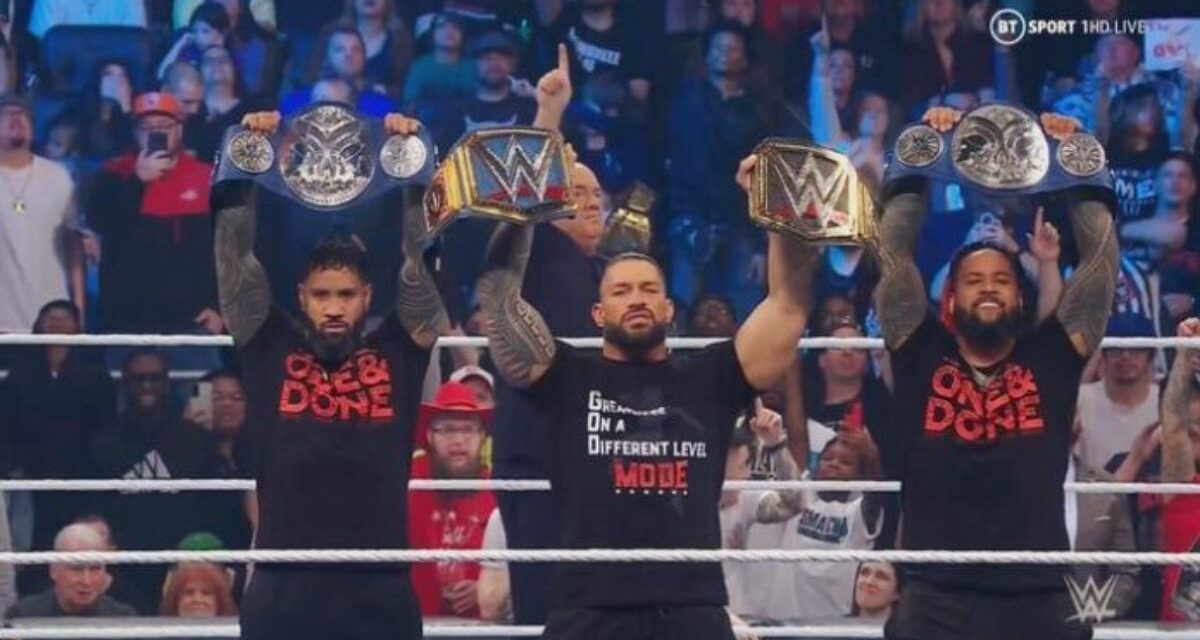 WrestleMania weekend was amazing. The intense battle between Roman Reigns and Brock Lesnar was phenomenal.

Friday Night SmackDown is coming to you live from Milwaukee, Wisconsin.

Tonight, Roman Reigns as the Undisputed Champion will appear to detail his next step with the Bloodline.

Ronda Rousey arrives in the ring after her match against Charlotte Flair at WrestleMania. Rousey promised she will make Flair tap out, and she did. Yet, I thought Rousey was robbed. As a result, Ronda challenges Flair at an ‘I Quit’ Match without excuses and miss Flair says: “No!”

Ronda pressures deeper by saying that the match is going to happen no matter what.

I’m here for the awkward sweating, the grunting and weird faces when the camera zooms in. On to the brawling!

After a successful debut, Butch from Sheamus’ entourage — Fight Night, gets to brawl Xavier Woods after his unhinged attack at WrestleMania.

Kofi and Xavier momentarily stop the evening to educate Butch, Sheamus and Holland who stood in the ring that everything after Mania weekend is a reset.

Woods says that while chatting with a friend, he was excited to beat Butch’s “rabid, infested ass.” Given his name, Butch butchers people during his fights by landing on Woods’ hand near the turnbuckles.

Woods is placed on the ropes outside the ring by Butch and executes multiple chest punches almost like Sheamus does.

Xavier is able to get some momentum and kicks Butch in the jaw plus to the side of the face later.

Butch loves stumping onto Woods’ fingers, he does that twice during the match.

Butch prepares to perform a powerful ending kick to Woods’ face only for him to move out of the way, grab Butch and roll him up into submission for the win.

Butch throws a tantrum and proceeds to slap both Sheamus and Ridge Holland in the face while they try to calm him down after his loss like a petulant child in a corner.

Sami Zayn’s battle against Johnny Knoxville for an Anything Goes Match was embarrassing while he thought he was coming out victorious until Wee Man shows up to annihilate Zayn to bits, dragging him around like a rag doll. It was entertaining.

Backstage, Zayn goes ballistic about his humiliation and says to Adam Pearce that the next person who comes out of the locker room will be his opponent tonight. Drew McIntyre exits. Sami starts backtracking. Pearce just shrugs his shoulders.

Gunther, the Ring General, invades SmackDown. He is not a smiley person. I don’t think we would get along. Gunther delivers a powerful punch and chops to Alonzo’s chest.

Gunther was the beast in the ring tonight throughout the entire match. He performs a power bomb to Alonzo for the win.

Happy Town — better known as Nappy Corbin and Madcap Moss — reveal themselves for a Happy Talk segment after Moss’ Andre the Giant Battle Royal win. This has been titled as the saddest talk we’re going to have. I can go to sleep happy.

During this conversation, we were supposed to be raving about Happy’s potential win against McIntyre only for him to blame Moss for the distraction he had at WrestleMania.

I was astonished by Moss’ terrible attempts at making a joke involving his name and brothels. Corbin asks him to provide another joke only for Moss to reveal how underhanded Happy’s treatments were towards him and enters into a tussle with Corbin. Madcap even stomps on Corbin’s hat.

I believe everyone was waiting for those two to split, especially McIntyre.

I haven’t heard Sami Zayn’s entrance song in a little while. I have no idea why I slightly missed it. I feel icky.

The bell rings and Zayn quickly exits the ring… to think about his hilarious embarrassment. He does that twice until McIntyre had enough and chases him then throws him into a barricade.

Sami makes another escape towards the ramp and McIntyre follows basically saying: “Hey! I’m not done with your weird Canadian ass!” He picks Zayn up and carries him back to the ring.

Drew charges for ‘Claymore Country’ but Zayn dodges, ventures past the barricades and into the crowd using the stairs to escape. The referee counts to ten and McIntyre wins by count out.

Raquel Rodriguez has an interview backstage about her debut as a strong contender in the wrestling world and turns down Los Lotharios as they attempt to kiss her cheeks. I like her already.

And speaking of powerful women, Lacey Evans arrives tonight to talk about her harsh and traumatizing life prior to become a wrestler. Her life as a child was not the one anyone should have to go through. The struggles and painful parts of her life made her who she is now: a mother, daughter, sister, wife, a soldier. She is stronger because she didn’t give up and kept going no matter the tearfully hurtful beginnings and training, she went for what she wanted. And that’s a beauty.

Liv places Sasha into a quick roll up for a submission but Banks gets out of it. Sasha tries to destabilize Liv with chest slaps.

Naomi says that both Rhea Ripley and Liv Morgan have the talent to go far but they don’t appear to be on the same page. I don’t see that… yet.

Sasha jumps from the top rope onto Liv’s stomach for a submission and fails there. Back and forth between the ladies as they hit the turnbuckles and kicks to the midsection.

Morgan hits Banks with a knee in the face after getting kicked herself, temporarily knocking them out.

Sasha flips Liv’s body off the top ropes and slams her in the middle of the ring. I don’t what Banks was trying to do when she lifted her legs up, but they get caught into submission awarding Morgan the win.

This was the moment I was waiting for all night for Roman Reigns and the Usos to show up. Watch how I didn’t mention the weasel’s name, and I won’t now.

Reigns announces that he wants the Usos to unify their Tag Team Championships with the ones from Raw held by the RK-Bro, Randy Orton and Riddle.

Shinsuke Nakamura interrupts the chat by showing clear anger towards the Usos’ part in Rick Boogs’ knee injury at WrestleMania. Reigns sympathizes with Nakamura because the Bloodline has suffered its fair share of injuries too. He gives Nakamura a long hug, granting Jey and Jimmy time to super kick Nakamura in the face.