NWA USA: Debuts, Divas, and Duels going to the wire 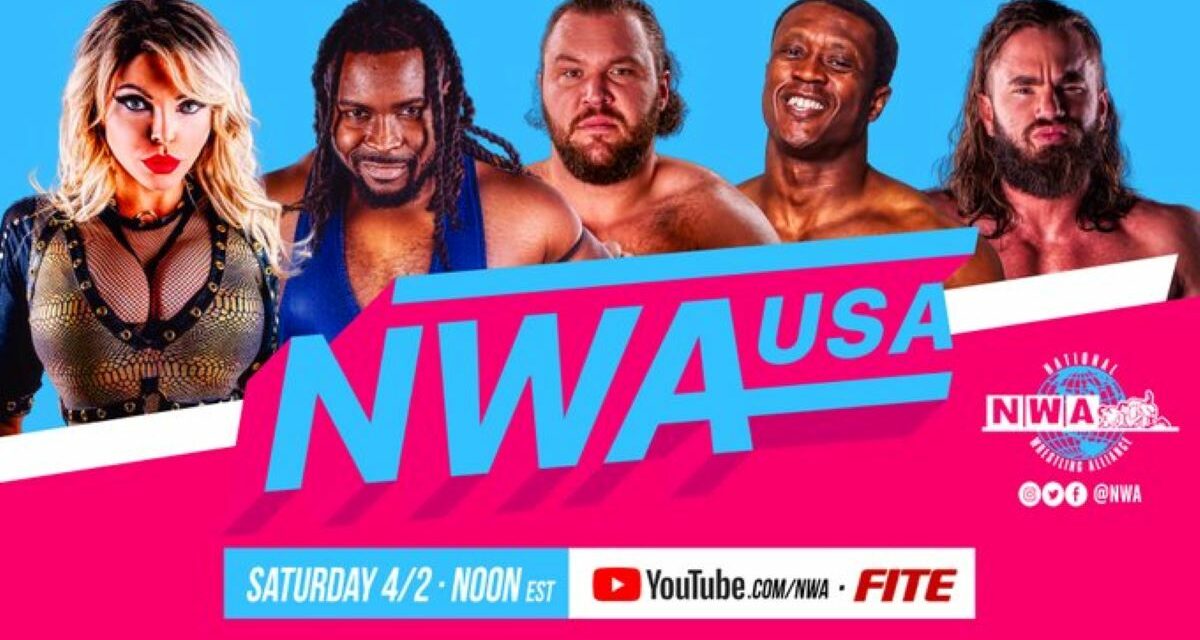 Another Saturday brings more action on this episode of NWA USA, with Big Strong Mims and AJ Cazana in the main event featuring two big and brawny men of the National Wrestling Alliance, and Natalia Markova showing her dominance in the women’s division.  But today is also a special day because it features the debut of The Ageless One, Caprice Coleman, in action.

The show goes straight to May Valentine, who’s with Kerry Morton. She asks if he will pursue the NWA Junior Heavyweight title, like his dad Ricky Morton. He says, “You’re dang right,” as he wants to prove himself in the NWA and establish a reputation like his father before him.

I’m sorry, but that “You’re dang right” response was just so vanilla and wholesome, I’m surprised it wasn’t sponsored by an ice cream company.

We go to the “NWA Arena” at the Skyway Studios in Nashville, TN.  Joe Galli and Velvet Sky have the call, and we head right to the First Match… 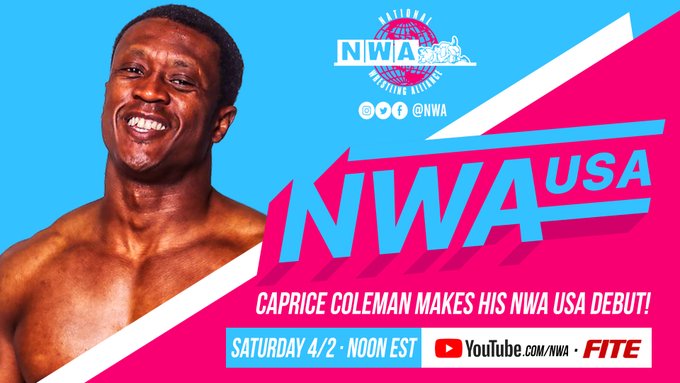 “The Ageless One” Caprice Coleman vs. Alex Taylor (with Danny Dealz)

Danny Dealz interrupts Kyle Davis, and gives his Ill-Begotten stablemate a proper ring introduction, to a chorus of boos.  Coleman is able to take control early in the match and outwrestle Taylor.  But Taylor trips up Coleman and goes to cover for a one count.  Taylor goes to work keeping Coleman grounded on the mat and then dumps him to the outside of the ring, where Dealz puts the boots to Coleman. The ref catches this, annnnnd…he’s outta here!

As Dealz pleads his case (unsuccessfully), Taylor sends Coleman to the ring post, and he effortlessly swings around and lands a kick in his mush.  Back in the ring, Coleman gets a spinning heel kick that almost doesn’t get all of Taylor, but he quickly follows up with a thrust kick to a leg drop to cover for a two count.  Coleman calls for his Holy Trinity finisher, but Taylor blocks the move and crashes him down with a falcon arrow.  He goes up the top turnbuckle, but Coleman leaps up and hits a standing huracanrana on Taylor to drop him to the mat. Then, as Galli calls it, he gives Taylor the Father, the Son, and The Holy Trinity (rolling suplexes with a bridge finish), and hallelujah it is over and done.

Your Winner via Pinfall:  Caprice Coleman

We go backstage to May Valentine, this time with AJ Cazana, and she queries his thought about the main event. Cazana notes that Mims is big and strong, but he is a third-generation star, and he can beat him at the eleventh hour, as he knows how to get that all-important win.

Time to head back to the ring, and it is between…

An interesting note:  Markova is introduced by Kyle Davis as “The Crush.” So don’t expect any Russian monikers for a while, folks.

Galli mentions that today is Riley’s birthday, but she’ll be crying courtesy of Markova, who just lays a vicious beat down on her.  As she toys with Riley, she goes for the signature Beautiful Disaster kick, and Riley manages to move out of the way.  The hometown crowd is behind Riley, as she fires up some offense, but it’s not enough as Markova finally lands the Beautiful Disaster, and nails a double arm DDT to finish up the match.

Your winner via Pinfall:  Riley

It’s time for another segment highlighting the wrestlers of the NWA  Last week featured Caprice Coleman, and this time we get to hear from Kenzie Page. Until the NWA decides on a name for this, I am dubbing this part of the show, “A Spotlight Shoot in Sixty Seconds ™.”  For now, please to enjoy:

“As most of you know, I am Kenzie Paige. I’m twenty years old. Basically, my life has just been revolved around wrestling my entire life.  It has been nothing but wrestling. I trained with Dr. Tom Prichard [and] Glenn Jacobs, from a very early age. You know, people knew I was going to be a superstar and I really took that and made it my own and I’ve made wrestling my entire life. You know, I eat sleep, [and] breathe wrestling every single day. You know, I found myself here in the NWA. I worked so hard, and now I say I’m part of the National Wrestling Alliance. Obviously, my main goal is to have gold in this company. But beyond that, past that… being a champion for the National Wrestling Alliance; I want everyone to remember Kenzie Paige. Whenever everyone thinks of the National Wrestling Alliance, they’re gonna think of…Kenzie Paige.”

We get a message that during a camera test, the camera and audio picked up some talk by The Fixers and BLK Jeez trying to smooth things over with the double DQ issue between Jay Bradley and Marshe Rockett last week.  Jeez proposes a tag match next week between Marshe Rockett and someone else. Bradley is already thinking this is super sus (as the kids say) but Jeez assures that there will be no Clearwater or Tyrus, or even him at ringside. Bradley and “Wrecking Ball” Legurtsky are game because Fixers Rule!!

Galli plugs next week with Colby Corino and The Fixers in action, but for now, it’s time for the Main Event, and it is… 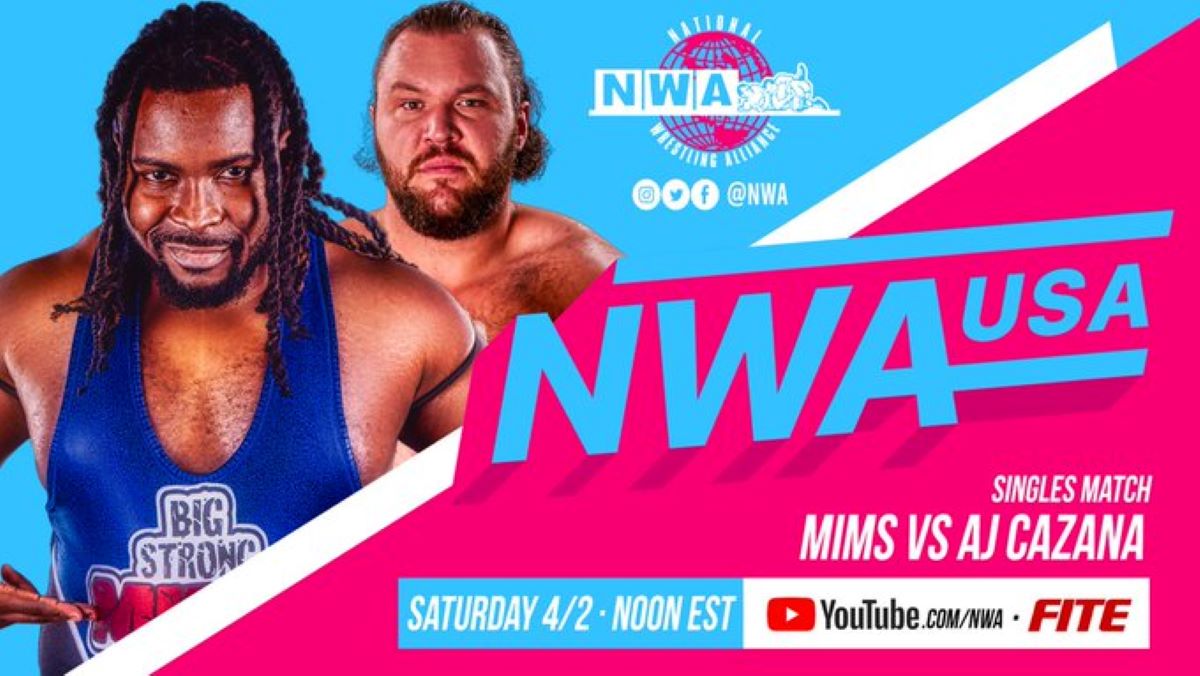 Another big standing ovation for Mims (pardon the pun), and there is a feeling-out process between the big men, and Mims easily gets a waist lock to a takedown because (say it with me) he’s big and strong.  Cazana gets in a hammerlock but Mims rolls through and gets his own, then hits a shoulder takedown and a scoop and a slam to the third-generation star.  Mims goes to a three-point stance, but Cazana gets an elbow up and shoulder tackles him in the corner.  He attempts to whip Mims to the other corner of the ring, but he reverses and head butts Cazana to a slam for another two count.

Mims goes back on the attack and Cazana rakes his eyes, and follows with a scoop and slam to a big elbow drop for two count.  Cazana keeps him grounded, but Mims fights up to sunset flip for another two count.  But “The Legacy” gets back in control and tries to soften Mims’ back up for a camel clutch, but he attempts to power through and Cazana stops him at every turn.  One minute left in the match, announces Davis, and now Cazana cinches in the clutch, and Mims waves off the pain.  Cazana starts to crank on his neck and…the bell rings.  Kyle Davis then gets on the mic to announce…

The Match is a Draw, as Time Elapsed

The fans aren’t happy and Cazana is definitely not happy, as he feels he had it in the bag. Cazana gets in the ref’s face and Mims comes up behind him with the Big Strong Slam to send a message, and now the fans are happy as the show goes to credits.

I can allow one non-finish for a main event a week.  But two?  If it’s to further angles in the NWA, then I’ll give it some leeway, but I’m more a big proponent of actual finishes, specifically in the main event.

But Cazana and Mims looked real impressive all the same, and Coleman has not lost a step.  Markova still looks good in the ring, but I’m curious what the next step is going to be for “The Crush?”

Well, it’s something to look forward next week, so see you in seven!