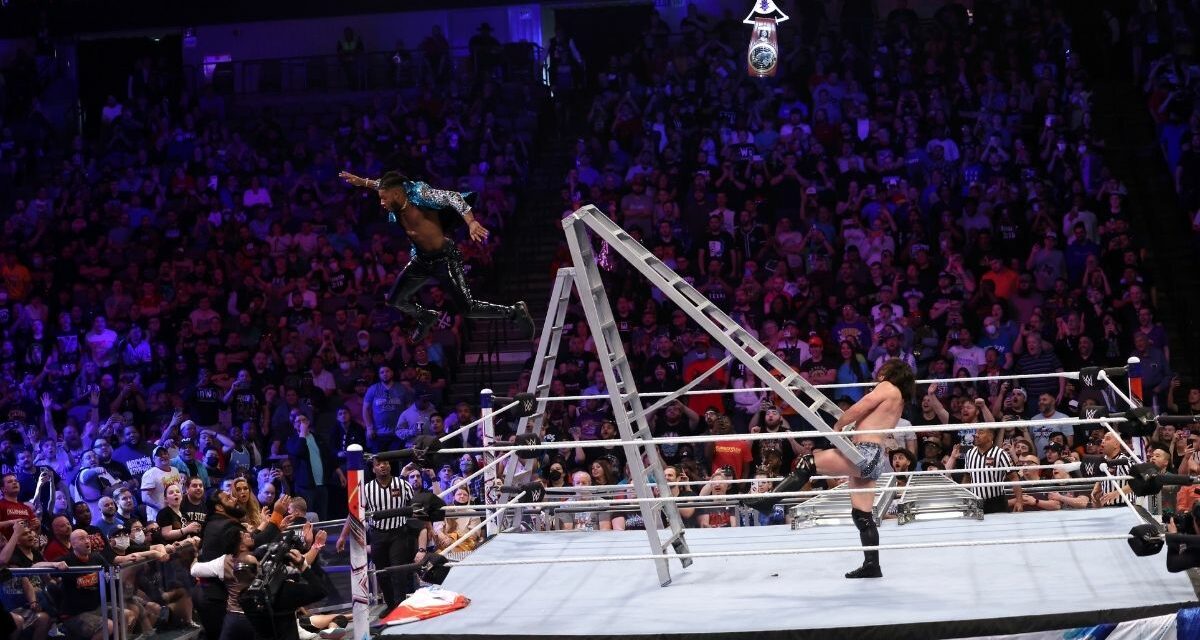 Hidden between the numerous events of WrestleMania weekend was NXT Stand & Deliver at the American Airlines Center of Dallas, Texas. Being the first NXT show outside of the WWE Performance Center in Orlando, Florida, the polarizing NXT 2.0 roster was given the opportunity to impress on a larger scale. With the usual main-roster stage setup and various special entrances, the brand’s atmosphere received its needed resurgence.

Two of six matches highlighted the fluctuating show, as the opening multi-man ladder match was an enthralling bout so well-orchestrated that anything after struggled to follow. It was the afternoon’s main event that regained momentum, as NXT Champion Dolph Ziggler defended against the face of NXT 2.0 Bron Breakker. Unlike the heydays of TakeOver on WrestleMania weekend, NXT Stand & Deliver won’t stand out in the eventful Dallas lineup, but the brand delivered a decent tailgate party for something more stupendous. 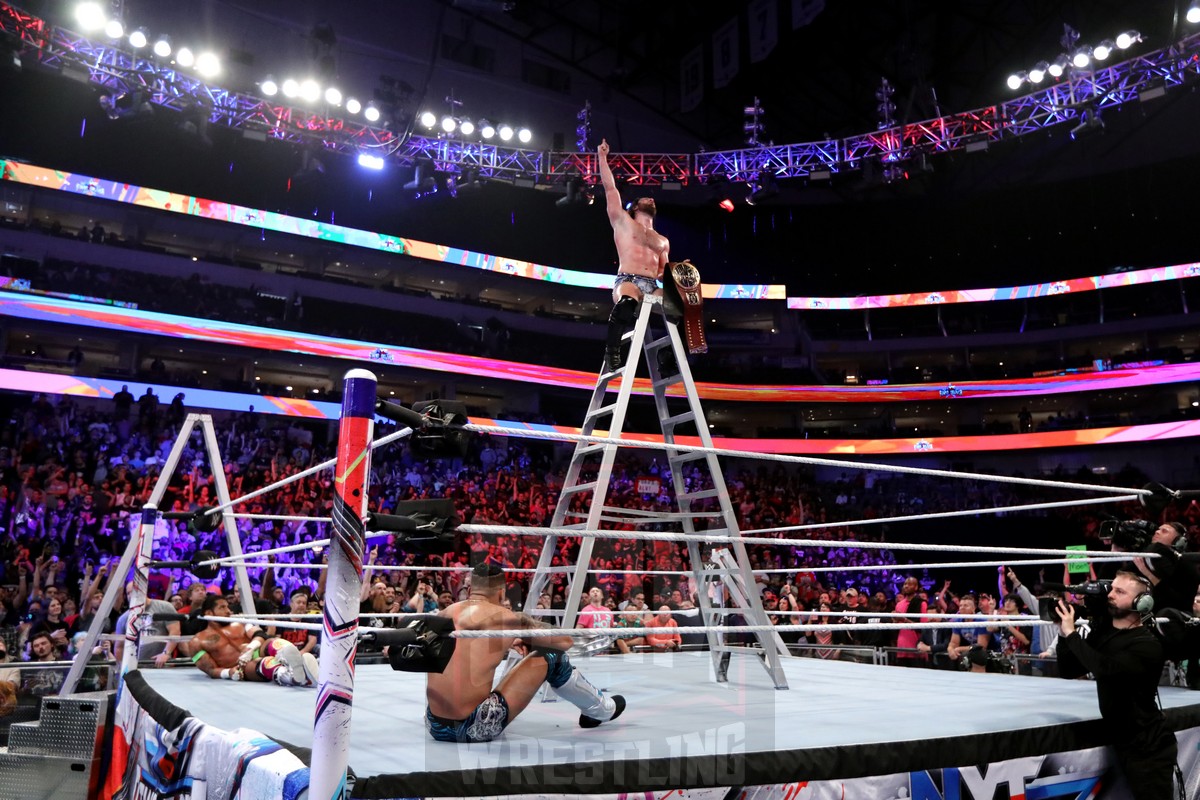 From the small-scale Performance Center of Orlando to the American Airlines Center of Dallas, the upgraded environment is refreshing. Legado del Fantasma, Trick Williams, and Sanga are ringside to eventually introduce ladders into the five-man opener, which is fast-paced from the get-go. It’s a continuous scramble to the top, and each competitor pulls off an insane maneuver, like Escobar’s sunset flip to Sikoa off the ladder. Williams attempts to capture the title for Hayes but is tipped outside onto the other cornermen, leaving the actual competitors to themselves. “Human demolition derby,” commentary says before Waller crashes through a bridged ladder. Meanwhile inside, Grimes delivers the Cave In on Escobar, quickly scales the rungs, and unhooks the championship belt. Grimes becomes the new North American Champion in an opener that showcased how exciting NXT 2.0 can still really be. 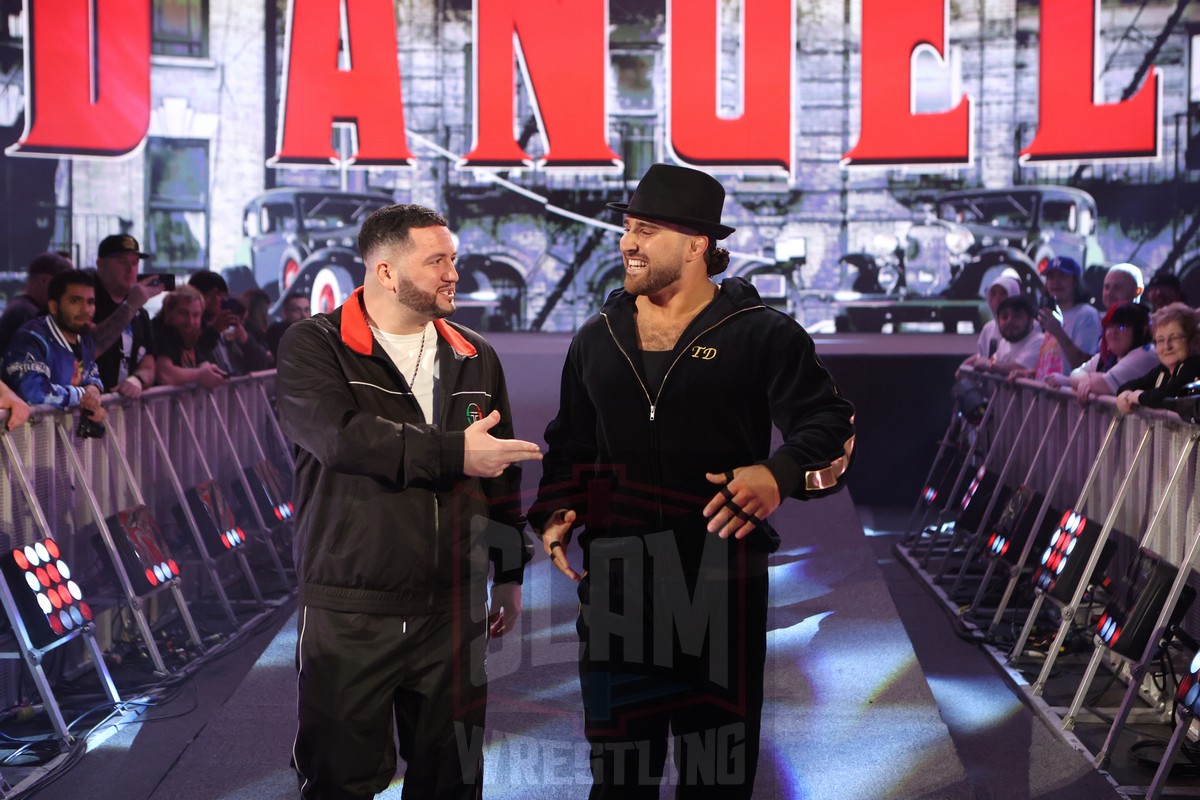 A beautiful package precedes Ciampa’s entrance, highlighting the 7-year NXT career of the black-and-gold staple. He spits his water like Triple H and poses like Shawn Michaels while his opponent, D’Angelo, is accompanied to the ring by “the real life Tony Soprano” AJ Galante. Ciampa carries his rookie opponent to an arena-worthy matchup, including low-blow nearfalls and foreign object involvement. D’Angelo grabs the ropes to break the Gargano Escape and DDTs Ciampa onto the previously exposed concrete floor. With the “Blackheart” rocked, D’Angelo puts his opponent away with a single boot for the pinfall victory. “Thank you Ciampa” chants ring aloud commemorating “the end of an era” for NXT. 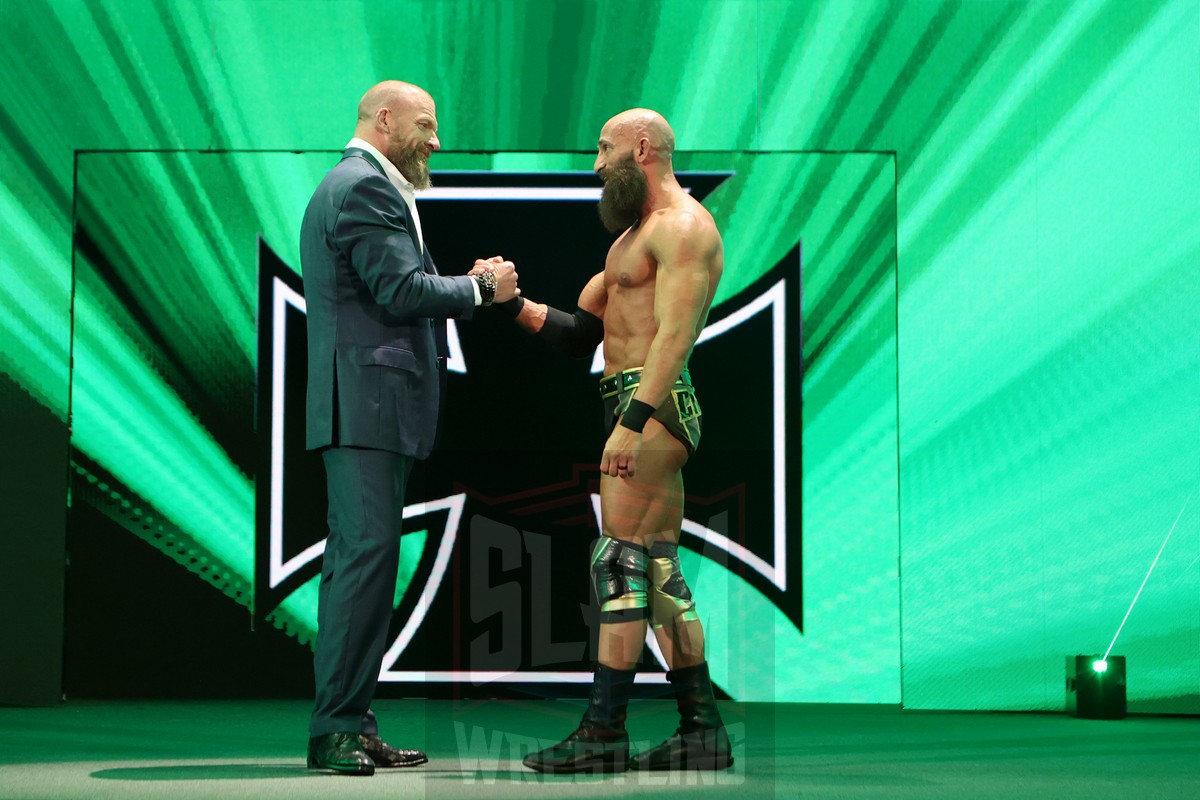 During Peacock’s commercial break, Triple H met with an emotional Ciampa onstage for one last farewell. Meanwhile, members of Chase University join the audience for the proceeding matchup. 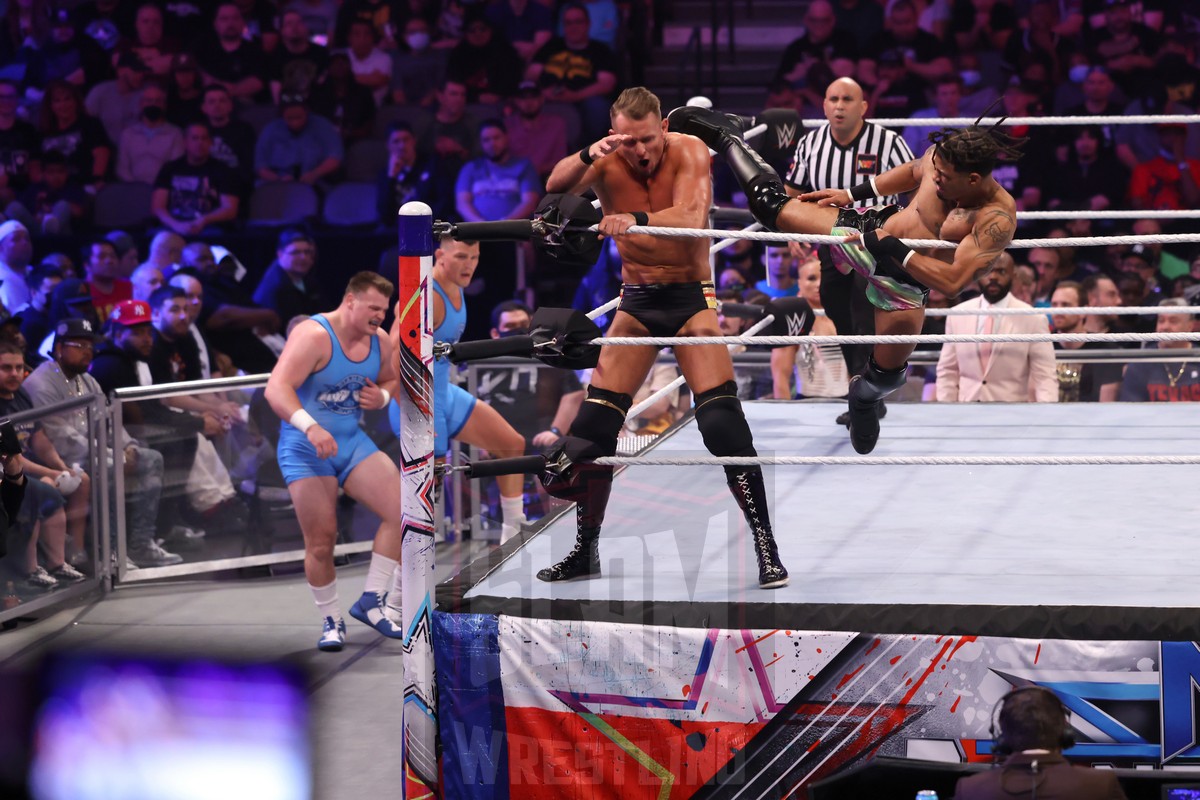 The Creed Brothers Vs MSK Vs Imperium (C) in a three-way bout for the NXT Tag Team Championships at NXT Stand & Deliver on Saturday, April 2, 2022, at the American Airlines Center in Dallas, Texas. WWE Photo  MORE NXT STAND & DELIVER PHOTOS IN OUR GALLERY

Triple-threat tag team rules are messy, and this championship bout follows suit. Dallas seems overwhelmed by the untraceable action, and the loudest crowd reaction is the jeers for MSK’s Nash Carter. Imperium, who debut a new theme song, are able to shine as Fabian Aichner’s incredible strength is on display, and the energy eventually rises with Wes Lee’s Spiral Tap. Brutus Creed quite literally cannonballs to the outside, but he’s taken out by Imperium’s assisted powerbomb. Inside, MSK delivers a hurricanrana and powerbomb combo to Marcel Barthel to recapture the NXT Tag Team Championships. 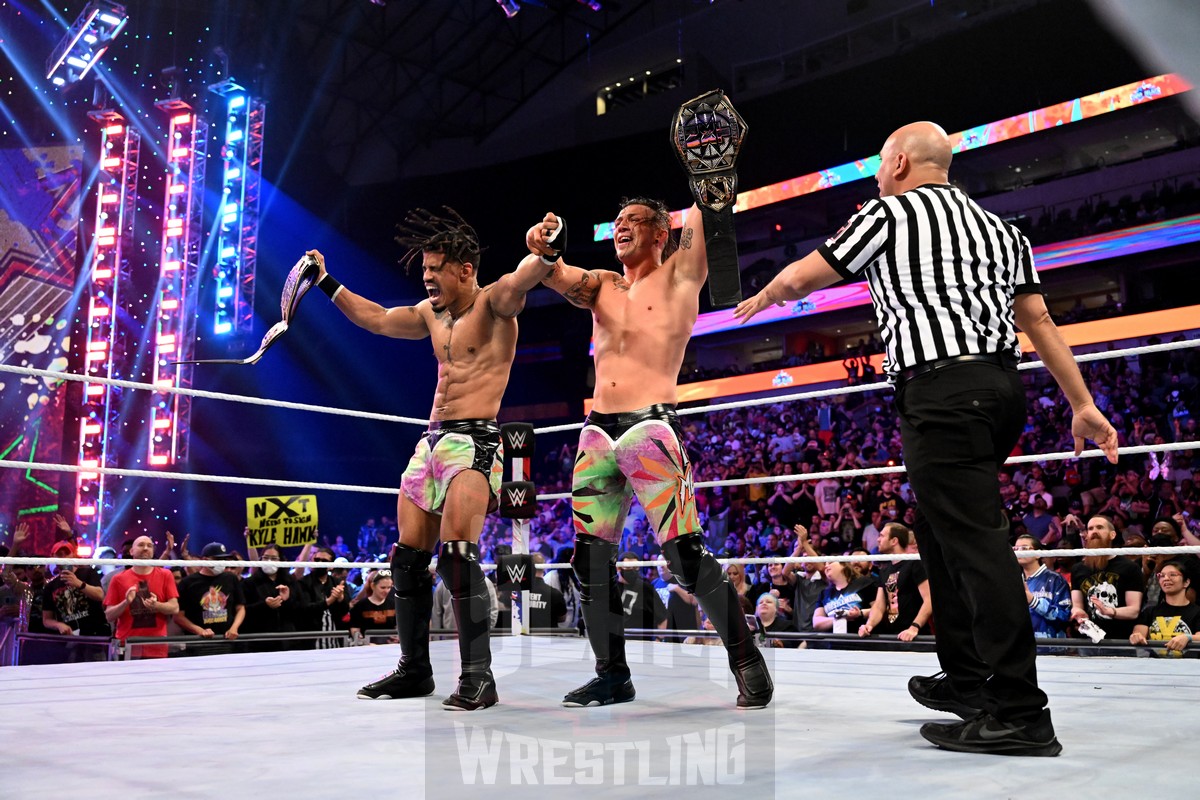 The Creed Brothers Vs MSK Vs Imperium (C) in a three-way bout for the NXT Tag Team Championships at NXT Stand & Deliver on Saturday, April 2, 2022, at the American Airlines Center in Dallas, Texas. WWE Photo  MORE NXT STAND & DELIVER PHOTOS IN OUR GALLERY

Earlier today, Joe Gacy and Harland were at the Dealey Plaza: “I can only hope you freely choose peace,” says Gacy. Commentary then recaps the Stand & Deliver preshow, where Raquel Gonzalez and Dakota Kai won the NXT Women’s Tag Team Championships with the help of Wendy Choo. 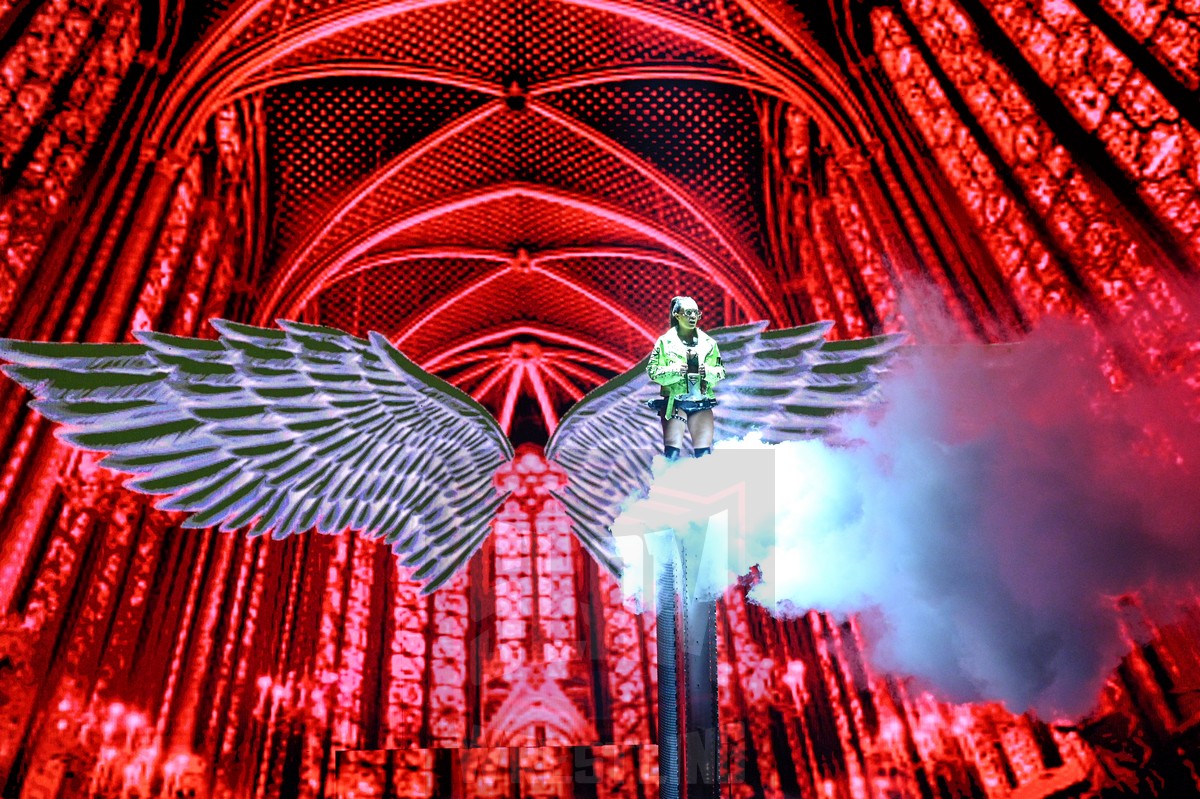 Angelically lowered from a podium is Rose, who debuts a new white-strapped championship belt. The third uncontrollable multi-person match of the night, the chaos novelty is wearing off quickly, and tonight’s opener has been impossible to follow. Dallas simmers in the monotonous back and forth, but there are numerous highlights such as Jade’s Destroyer onto the apron and Shirai’s top-rope Spanish Fly. The latter hits her finishing moonsault onto Jade, but Rose capitalizes with a running knee to retain the NXT Women’s Championship.

“The moment you’ve all been waiting for” arrives when the hottest couple award goes to Dexter Lumis and Indi Hartwell with 89% of the votes. “I smell collusion,” says Wade Barrett as Duke Hudson and Persia Pirotta throw a fit.

Gunther’s signature Antonin Dvořák Symphony No. 9 theme song is now gone, and Dallas is bringing the “WALTER” chants. What hasn’t been redacted though is Gunther’s authentic, hard-hitting, and methodical in-ring style. There’s a significant flare of Knight, who makes the comeback and delivers a superplex for two. But with a top-rope splash and powerbomb, Gunther definitively puts Knight away. 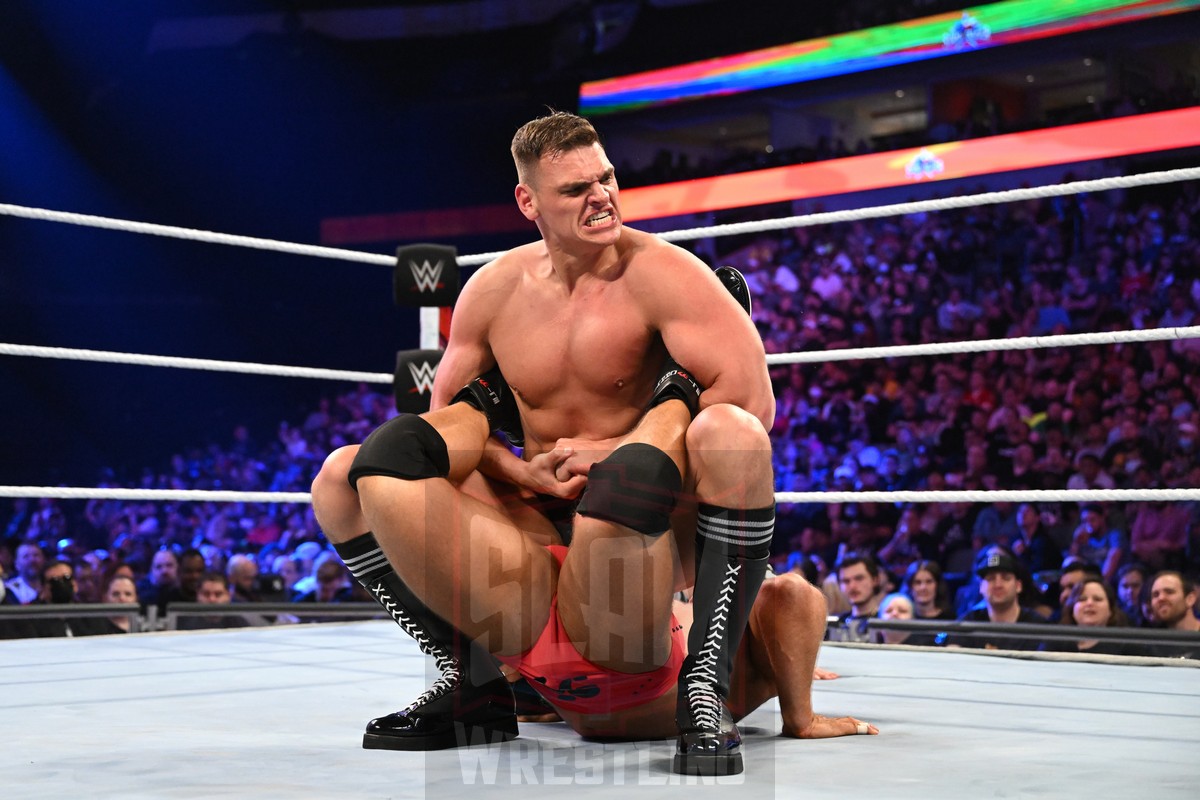 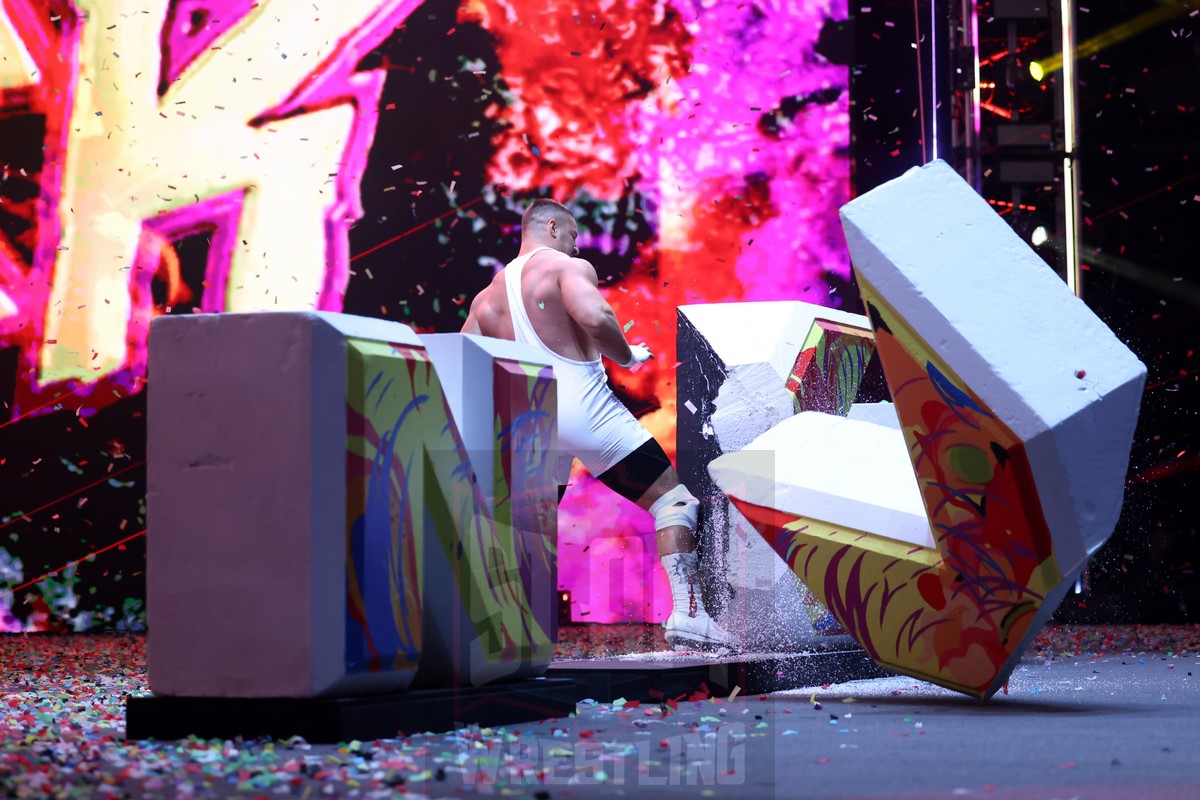 With a color-splashed chainsaw, the challenger tears through the giant NXT block onstage; Breakker is undoubtedly the face of this brand. The main roster invader Ziggler, accompanied by Robert Roode, cheapshots Breakker to begin the bout, but the latter recovers with a slam. Breakker fumbles early on, which has become habitual, serving as reminder of how unseasoned the future superstar currently is. Veteran Ziggler holds it together though, and as Roode is ejected, the champion retains control. Breakker comes back with a Frankensteiner and a vicious-looking spear, but Ziggler is saved by the returning Roode. The challenger hits an outside dive, kicks out of the Zig Zag, and delivers a third spear. But with an eye rake and exposed turnbuckle shot, Ziggler then hits a final superkick to retain his championship. 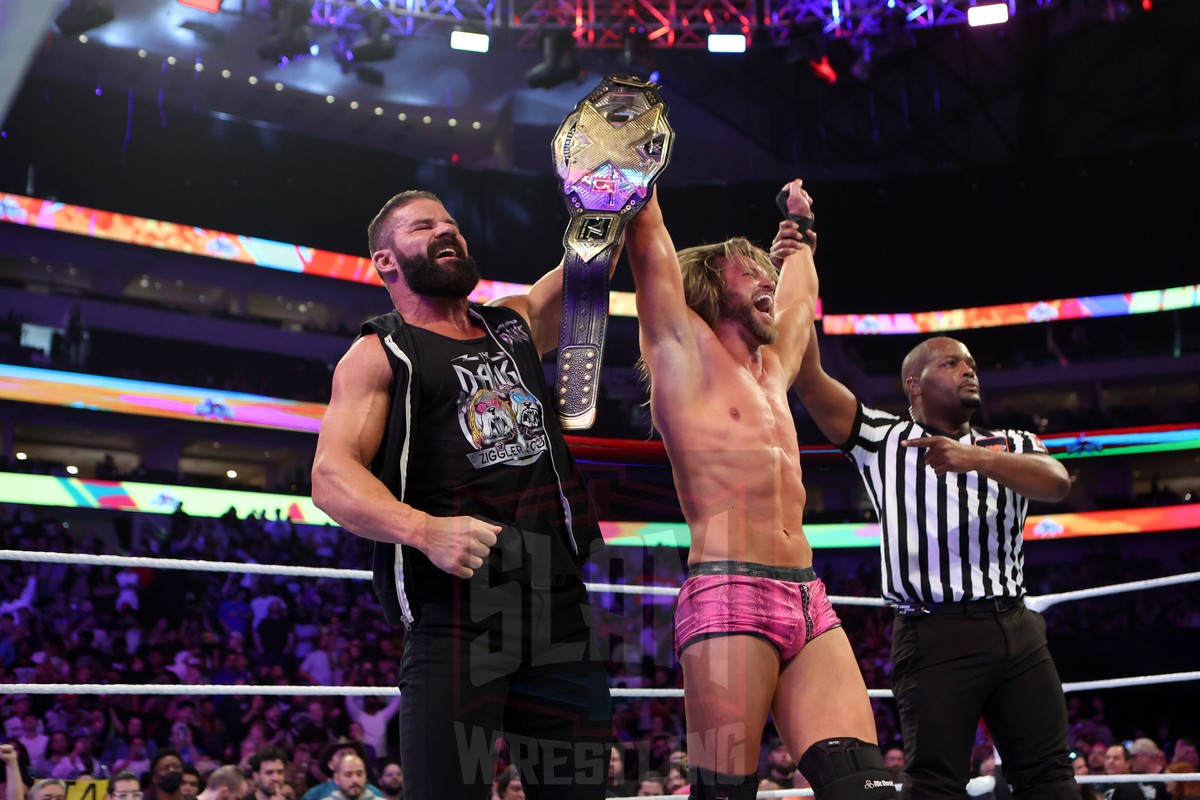 The North American Championship ladder match was impossible to follow, and the remainder of the card suffered because of it. While the opener had exciting, well-executed chaos, some matches were just messy and unengaging. Ziggler and Breakker put on a solid main event, but it wasn’t enough to make Stand & Deliver worthwhile.