AEW Dynamite: A Storm brews and an Idol prevails in Columbia 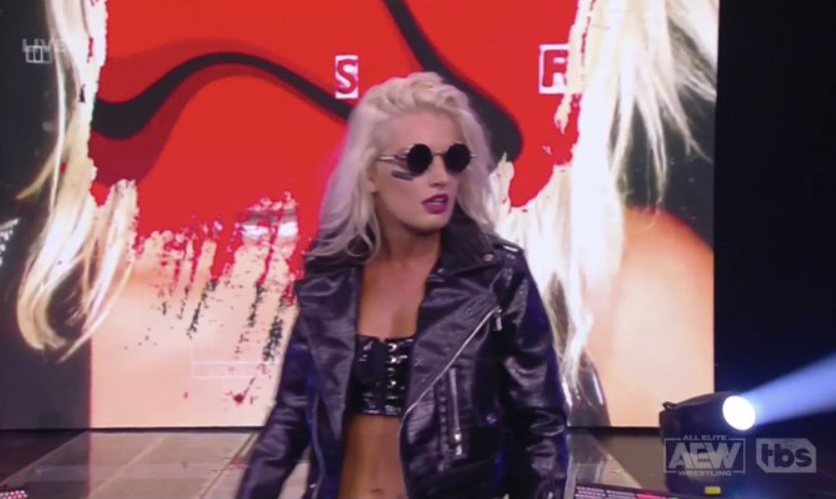 It’s the end of an era on AEW Dynamite tonight. OK, not really, nothing is happening on the show itself, and no one is leaving as far as I know. But it is my final Dynamite recap for Slam Wrestling, which is something since I’ve been doing them since the show first debuted a few years ago. Recaps will be in great hands with my colleagues, but it’s a tad melancholy. In any event, this isn’t about me, but rather the card taking place at the Colonial Life Arena in Columbia, South Carolina, so let’s flip the virtual dial to TBS and get into it.

If you had Caster in your “who’s going to mention the Will Smith-Chris Rock situation first” work pool, congrats, go get your money. There’s a discussion about whether Punk might not be at 100 percent after his confrontation with Dax Harwood last week, which becomes the narrative of this match as Caster begins faring pretty well. Punk guts it out and eventually locks in the Anaconda Vice, getting Caster to tap out.

Tony Schiavone asks Punk what his belt gesture last week meant, as in which title does he have his eyes on. Come on, Tony. Punk doesn’t know which Adam will be world champ when he gets his shot, but before his time in AEW is over, he will be world champion. This feels right, as he’s been in AEW long enough that a title pursuit is warranted.

Backstage, Alex Marvez is perplexed by wanted posters of Wardlow being put up, but MJF wants to convince all of us that the Pinnacle still exists. Alas, FTR seems like they are friends with both MJF and Wardlow and want the two men to settle things among themselves. MJF, not very convincingly, tells them Wardlow used to talk smack about them. It’s a reluctant Pinnacle huddle to end the segment. Awkward!

Lethal offers a handshake after the opening bell only to see his hand smacked away. Oh, it’s like that then. The announcers note that Lethal might have been on his way to a big victory over Adam Cole last Wednesday, except that Cole decided to take a shortcut to win. And by that, I mean he used a low blow. This bout does a good job making me believe Lethal might pull off a win, which is all you ask for in a situation like this where it seems so clear the other competitor is going to win unless there is interference or the like. Sure enough, it’s close but not quite again for Lethal, with Mox shrugging off a bunch of damage to his left leg to win.

After the match, Mox offers a handshake, and Lethal is clearly anguished but eventually accepts.

A video segment wants you to consider how Marina Shafir can be a problem for the rest of the women’s division. Consider if you will, as Rod Sterling used to say.

As soon as MJF comes out to join the announcers, FTR looks a little miffed that he’s making it about him. Schiavone asks MJF about the not too enthusiastic Pinnacle huddle, but he dismisses any concerns. Remember when Max joined the Inner Circle just to try turning it against Chris Jericho? Those were good times. Billy Gunn sneaks in a huge shot on Cash Wheeler on the floor, leading MJF into a rant about referee Aubrey Edwards. But wait, who’s that coming through the concourse powerbombing a security guy through a table? Yes, it’s Wardlow. He eventually runs into so many security folks that even he is overwhelmed. Oh, and there’s still a match going on, which FTR wins with the Big Rig. MJF runs down and tries to celebrate with FTR, but the top guys aren’t having it and the fans try to encourage them to formally turn their backs on Max.

It’s been reported to me that many of you don’t like the Jericho Appreciation Society. Look, all I’m saying is the group is a good way to elevate Daniel Garcia and 2point0, which I still maintain is the case. Some of the stuff they are doing is kind of goofy, though, like Jake Hager saying there’s no one on the other side of the curtain during their backstage interview, when — of course — Eddie Kingston, Santana and Ortiz are there to launch an attack. A fracas breaks out that leads all the way to the ring. But as often happens with these things, even though the good guys are on top early, it’s the bad guys who stand triumphant at the end of the segment.

When Jade Cargill isn’t pleased with Smart Mark Sterling’s choice of opponent for her, he switches to plan B, which is Marina Shafir. Hmm …

This seems like a bit of a tryout for the Blackpool Combat Club for Yuta, a feeling that only intensifies when William Regal joins the announce team and says he is “very interested” in Wheeler. Yuta pulls off a cool inverted bridging Figure Four that gets the fans behind him, just like I’m behind Regal for exclusively referring to Excalibur as “Man in the Mask.” Thought maybe Lethal would be the top “look good in a losing effort” moment for this show, but Wheeler has arguably never had as good a chance to look good as this, pushing Danielson until he manages to get Yuta to tap out. And Regal remains impressed.

It’s time for the Undisputed Elite championship celebration, which notably includes no titles that really belong to Cole or reDRagon. Cole argues some semantics, however, saying they took the belts, they didn’t steal them — because you can’t steal something that belongs to you. I don’t think that holds up in court. Also Kyle O’Reilly may have had too much champagne. Wait, who’s driving the white Tesla into the arena with huge horns on the hood? It’s “Hangman” Adam Page, unafraid of wading  right into a one-on-three scrap. He’s soon joined by some men Cole had us believe were not in Columbia tonight, Jungle Boy and Luchasaurus (also Christian Cage). The faces clear the ring in style, regaining their title belts while doing so.

Not sure how Schiavone can promise that Thunder Rosa won’t be interrupted tonight, considering how effective AEW security has been tonight (a.k.a. not very), but she vows that as a pillar of AEW, she will remain standing, and she’s looking forward to battling Nyla Rose.

FTR has something to say as well, vowing to add the Ring of Honor title belts to their AAA titles. Dax issues the challenge he wants more than anything though: FTR vs. Young Bucks II. Do you accept, Bucks?

This should be a popular debut, as Storm has been widely requested by AEW fans and is the mystery opponent for the Bunny. You’d have to think she goes over here as well, because why bring her in and not put her in the tourney? OK Bunny is hitting a lot more offense than I’d expect. But Storm does indeed get the victory, the logical outcome.

A response to Rosa comes via Vickie Guerrero, who doesn’t really speak into the mic, and Rose, who does. Nyla promises to “cement my legacy with your blood,” then goes one metaphor too far. Good effort, though.

No disrespect to Jose, but Allin has the advantage in people in his corner. It doesn’t help him when Andrade flies out to the floor and knocks him right off his skateboard before the match even officially begins. There are 15-plus minutes left in the broadcast, so this figures to be a slugfest. Allin taking a beating is nothing new, but this is a lot of punishment before the bell. Naturally, he hauls himself into the ring and the bell finally rings. Both men end up slapping the crap out of each other, though Bryce Remsburg draws the line at Andrade using his belt. Jose tries to show me up by rushing to his boss’ aid when he’s in a submission hold, but Sting cuts him off. Butcher and Blade appear as well, and are swiftly taken out by an Allin dive to the outside. Andrade strikes right after that, using a buckle bomb to set up El Idolo, and even Allin isn’t kicking out of that.

Andrade’s faction is beating up on Allin and Sting after the bell, and unfortunately for our heroes, the first people to respond are Private Party. But Matt and Jeff Hardy are on the scene as well, wielding chairs. The fans pop for the Twist of Fate and Swanton Bomb, a feel good ending to this broadcast. See you in seven, or someone will!

Unlike last Monday, this week’s broadcast started out strong and didn’t fizzle out quite as much in the second hour. The fans seemed to be live for the debut of Storm and the continuing MJF-Wardlow drama, with the added wrinkle that everything isn’t all good in Pinnacle-land. It would make MJF’s eventual comeuppance if he has no one to turn to and eventually has to face Wardlow completely alone, so hopefully that’s where their story is headed.