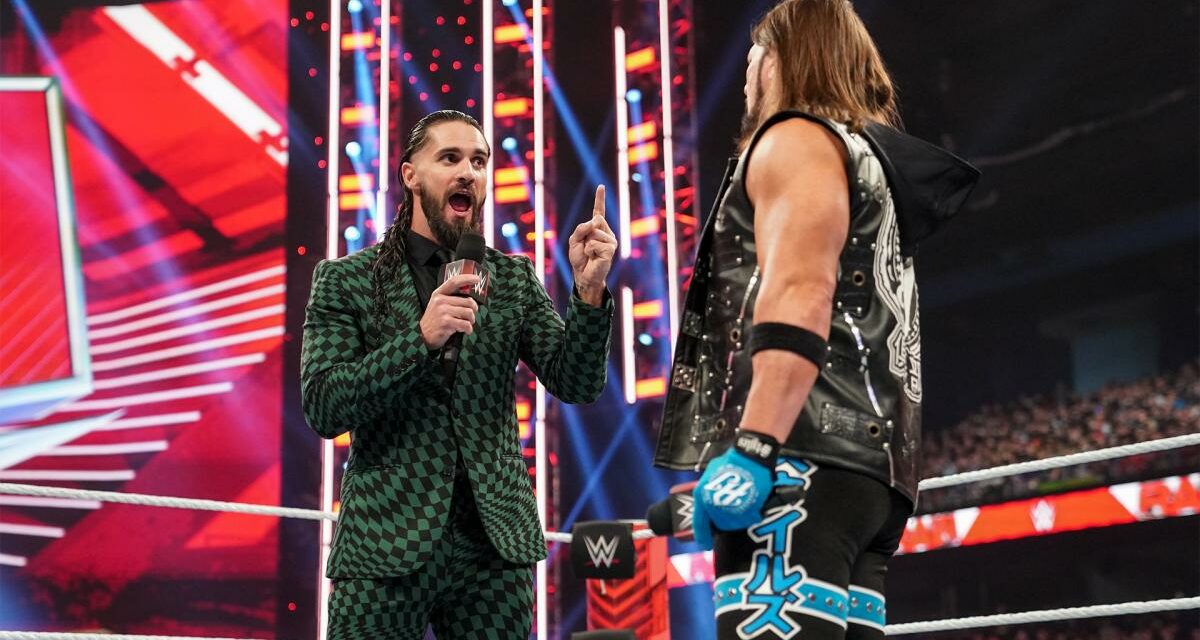 Trust Kevin Owens to make the most out of whatever he’s been given to work with. Whether this thing with Steve Austin becomes a fight, a confrontation, or just a peaceful edition of The KO Show, Owens has one job and that’s to be despised. To that end, cue The Rattlesnake’s music right off the bat which drives the Chicago crowd into a frenzy. Their anticipation of seeing Austin builds and then crashes into boos when they realize the bald, 3:16 t-shirt wearing, double leg-braced man walking to the ring is actually … Kevin Owens.

Owens gets in the ring, grabs a mic where we can finally see the marks of his bald-cap (I really thought he’d shaved his head from a distance) and utters some of Steve Austin’s most famous catchphrases — including doing a little back-and-forth “What?” with the crowd. He proceeds to speak from Austin’s point-of-view, suggesting that he didn’t think carefully enough before agreeing to appear at WrestleMania with Owens.

The crowd chants “We want Austin”, and as Owens tries to tell them that he’s already here, the famous music hits once again and the crowd, once again, goes nuts — until Owens starts laughing because he pulled the ol’ phony theme music on them twice. He caps it all off by drinking some beer, delivering a stunner to a jabroni, and climbing the ropes to pose with his fists (but not fingers) raised.

Backstage, Kevin Patrick speaks with Seth Rollins about his lack of WrestleMania plans. Rollins pauses for a long time (giving the crowd a chance to chat “Cody”) before he cackles and grabs the mic away from Patrick, walking away with it.

The Miz joins commentary as Dominik downs Ziggler with a couple of arm drags, but Ziggler tags in Roode which allows for a double-team neckbreaker on the younger Mysterio, forcing Rey to break up a pinfall.  Moments later as Rey and Dominik dive to the floor and take out both Ziggler and Roode, Rollins’ music hits and out comes the former architect/messiah.

He says the show will stop until he gets a match at WrestleMania. His mic is giving him trouble and we go to commercial as he complains about being silenced.

Back from break, the match is again in progress as Rey blocks a superplex from Ziggler and lands a senton instead. Rollins, I guess, went backstage, as Roode tags in only to receive a tornado DDT. Dominik tags in and lands something of an RKO on the interfering Ziggler, who then gets into something odd outside of the ring with Mysterio (the camera cut away quickly but Rey seems to leap at, well, nothing, as Ziggler was several feet away from him).

Dominik goes the rest of the way alone, securing the pinfall with a 619 and frog splash.

Winners via pinfall: The Mysterios

Ziggler re-enters the ring right after the bell and superkicks Dominik down, and as Rey chases Dolph to the outside The Miz leaps from his chair and attacks Rey. He lands a Skull-Crushing Finale and then quite promptly rips off Rey’s mask. Dominik helps his father cover up with a towel as The Miz absconds with the mask.

Rollins is once again backstage with Adam Pearce and Sonya Deville, angry that they’re trying to keep him out of WrestleMania. Pearce says that maybe that there’s something they can do, but off walks Rollins again, cackling again.

After the break, The Miz shows off his trophy to Kevin Patrick, claiming it’s a gift for Logan Paul who uses to be a big Mysterio fan before being disrespected by the luchador.

Before the bell rings, the heels double-team Omos and take turns attacking him. Omos holds his own until they run him face first into the ringpost. Finally, the fight enters the ring and Omos lays Apollo out with a big boot. Azeez enters and Omos slams him dramatically. A straight kick to Azeez knocks him out and inspires Jimmy Smith to remark that Omos could chop down a Sequoia with one leg. That’s unnecessarily exaggerated, of course, because even chopping down a tree with two legs would be astounding.

Omos pays tribute to Roman Reigns’ victory at last year’s WrestleMania by pinning both of his opponents at the same time.

Omos grabs a mic and says that there’s nobody that can step up to him, no matter how big they are. Unfortunately inspired by Kevin Owens earlier, the crowd scatters a “What?” chant throughout his impassioned speech.

AJ Styles is next in the ring, explaining to the crowd that he has been overthinking the attack on him by Edge and it has consumed in. Now all he wants is action and he calls for Edge to come to the ring. Once more, though, and this is becoming a little funny, Rollins enters to his music and makes it to the ring.

The crowd chants for “Cody” again, so Rollins tells them to simmer down because rumours are fun but they don’t make WrestleMania moments. Seth suggests to Styles that he put off his match against Edge until he’s feeling one hundred percent and let Rollins take his place. Styles is not interested and promises to do what Rollins couldn’t and destroy Edge.

Pearce and Deville appear to announce they’ve decided to give Seth one last chance, and if he can beat AJ Styles he will get to face Edge at Mania. Styles, infuriated, lands a big punch before Rollins heads back up the ramp.

Backstage, Queen Zelina is imploring her partner Carmella to focus on WrestleMania and not her wedding (which is admittedly a big deal) and her reality show (which is not). Zelina tosses Carmella’s phone, Carmella calls her a hobbit, and they end up scrapping on the floor.

Backstage again, Styles accosts Pearce and Deville and promises that he’ll be the one heading to WrestleMania to face Edge.

Ripley and Baszler start things off, with Rhea quickly planting Shayna and tagging in Morgan for a double-team attack while Corey Graves pleads with the wrestling gods to let Carmella win so their honeymoon isn’t miserable.  Morgan reacts with understandable panic as Baszler nearly gets an arm bar on her, but Natalya tags herself in and is downed by a hurricanrana from Liv. Baszler gets back in and gains control with a running knee.

As Baszler holds Morgan down, Carmella stomps her way to the announcer’s table and Graves tries to talk her down. Meanwhile, a discus clothesline by Natalya and a Hart Attack by her and Baszler earn them the win.

Winners via pinfall: Baszler and Natalya

Zelina appears in the ring and decks Ripley with her sceptre while Carmella takes out both Baszler and Natalya on the floor. The tag champs celebrate in the ring, laughing and hugging like best friends.

Becky Lynch is in the ring after a break, sitting in a chair and getting very philosophical. She talks about the fifteen months that she spent without owning the world title, with that time becoming more and more painful. When she came back, and when the fans chose Bianca over her, she decided to sell her soul to hold on to the title. She warns Belair that she will do anything to win — if Belair can even make it to WrestleMania.

Elsewhere, Sarah Schreiber catches up with Austin Theory to talk about Pat McAfee, and he winds his way through a rambling promo that essentially ends up with him predicting a victory for himself at WrestleMania, which is no big surprise.

As they’re about to kick off the contest, Pat McAfee is introduced as a special guest commentator which, in my opinion, instantly improves the announce team.  As McAfee vows victory as strongly as Theory just did, Balor boots Austin to the floor. McAfee distracts Theory and Balor hits a dropkick as we go to break.

After commercials, Balor hits a flying forearm and stomps on Theory’s chest, and not longer after a Sling Blade sets Austin up for the Coup de Grace, though Mr. McMahon’s protege rolls away to safety. As Theory gains an upper hand, McAfee provides a distraction and this lets Balor win with a roll-up.

Orton and Riddle begin with some double-teaming as the Viper flips Riddle over onto a prone Gable. The Academy counter with a nice double-team as Gable slingshots Riddle up off the mat and right into a charging Otis. Riddle then suffers a series of painful looking moves as Gable trips him up on the apron, followed by another hard charge by Otis that sends Matt flying across the outside floor.

Back from a break, Riddle tags in Orton to minor fanfare and Randy gets a hangman’s DDT on Gable soon afterwards. Gable quite easily blocks an RKO, but doesn’t see Riddle tag in and a Bro Derek secures the win.

Otis takes exception to the loss and is about to squash Riddle when the Street Profits join the fight (in Chicago Bulls-inspired gear) and lay out first Otis and then Riddle.

Right at the bell, Reggie hoists Brooke onto his shoulders while Tamina does the same with Tozawa, though this particularly interesting strategy doesn’t last long at all. With Tamina slumped over in a corner, Reggie and Brooke throw Akira into her, and soon afterwards Tamina falls down and goons her partner. Reggie follows with a somersault pin and this is thankfully brief.

Rollins opens with mind games, taunting Styles and striking with a Sling Blade. He sets up for an early Pedigree, but Styles backdrops him instead and, moments later, backdrops him right over the ropes to the floor right, following with a Phenomenal Forearm before a break.

Returning from commercials, Styles is handily in control until he charges Rollins in the corner hard and, as Seth ducks out of the way, AJ hits his head just as hard on the turnbuckle. Rollins takes his time chopping down the dazed Styles, then hitting a suicide dive before more ads.

Back once again, Rollins is yelling at Styles and telling him that this isn’t personal, but Styles fights back with some flying forearms, a facebuster, and soon afterwards stops a buckle bomb by suplexing Rollins into the corner instead.  As Styles sets up another Phenomenal Forearm, though, Edge attacks him with a chair causing a disqualification victory for AJ and more heartbreak for Rollins.

Rollins grabs a mic and repeatedly calls out the bull**** of the result, trashing the set and looking despondently out towards the crowd, still clamouring for Cody Rhodes.

This was an enjoyable show thanks to Kevin Owens, who killed in the opening, and Seth Rollins, who shouldered most of the story all night. Honestly, since Raw is all about promoting the PPVs — ahem, premium events — these two did their job.