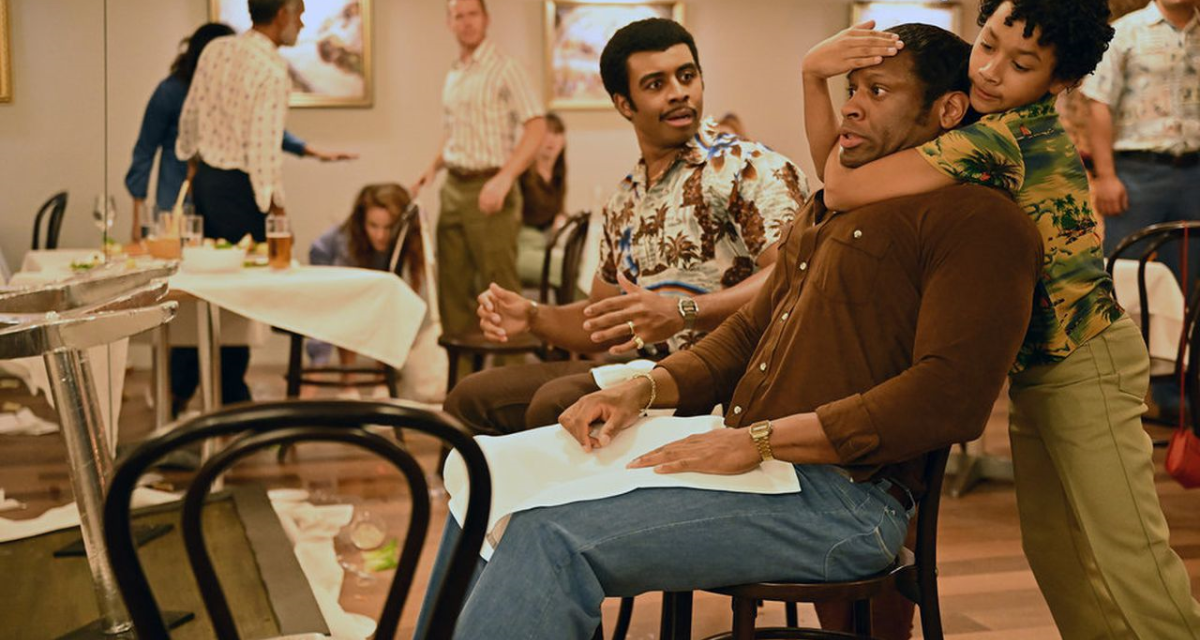 Young Rock is back for its second season, featuring the tall and true tales, with some license allowed for comedy, from the life of Dwayne “The Rock” Johnson. The first season featured rotating stories from the years 1982, 1987, and 1990, seeing Johnson grow up through those years around his father Rocky (played by Joseph Lee Anderson), mother Ata (portrayed by Stacey Leilua), and grandmother Lia Maivia (played by Ana Tuisila), while also presenting a fictional future in 2032 as Johnson (playing himself) makes a run for the United States presidency.

The season two premiere, titled “Unprecedented Fatherhood,” follows the same frantic pace as last season’s opening episode as it shows snippets from each time period. While this means a whirlwind tour of Johnson’s adventures in 1983 (as played by Adrian Groulx), 1987 (Bradley Constant), and 1995 (Uli Latukefu), it doesn’t feel quite as rushed as the very first episode because there’s not as much need for laying down exposition.

We already know the characters and we had a good sense of where things were headed at the end of last season’s finale, so this opener has more freedom for fun character moments and less concern for laying down multiple foundations.

We open with a returning Russell Park on a horse at the Johnson family ranch. Park is still playing a fictional future version of himself, one in which he has given up on acting (no more appearances in the Marvel oeuvre in the show’s reality, I guess) and is now following Johnson on the campaign trail to present his story to the world.

Park meets up with Johnson as he casts a fishing line on his ranch, interrupted by a reminder on his phone to send a group text to his daughters and serenading them with “Desperado” for a few bars. He explains to Park that he has dedicated his life to putting his daughters first, so Randall is naturally curious if this is something that Johnson learned from his own father.

Yes, and no, The Rock replies.

Rather than being inspired by the way Rocky Johnson raised him, Dwayne admits that he seeks to give his daughters what he himself didn’t have growing up. The two younger Rocks, Groulx and Constant, are shown in this episode to be pining after time and attention from Rocky.

Groulx, the youngest in 1983, is jealous of the time that his dad is now spending with Tony Atlas (a good looking facsimile played by Antuone Torbert) as the duo have just won the WWF tag team titles. Dewey Johnson spends some time daydreaming — first that he’s teaming with his dad instead of Atlas, and secondly that he beats Tony up in a restaurant where the family is celebrating the title victory. Ata reminds him, though, that this is the life that Rocky leads and his father commitments to being on the road.

Fast forward to the year 1987 and Constant shows Dwayne still chasing after his dad, this time as the family moves from Hawaii to Nashville where Rocky is getting some work with Jerry Lawler. When Dwayne arrives in Nashville a couple weeks before Ata is to follow, he’s met by wrestler Bob Owens who explains to Dwayne his role as a carpenter in the ring before handing him a glossy photo of himself as a gift and dropping him off at a hotel to stay with Downtown Bruno Lauer (played by a giggly Ryan Pinkston).

Bradley Constant as Johnson already towers over his friend Downtown Bruno (Ryan Pinkston) in a still from Young Rock.

Bruno, a heel manager who would also become famous as Harvey Wippleman in the WWF, would become a longstanding friend of Dwayne (and was featured on SlamWrestling.net about that connection here). Rocky eventually catches up with his son and tells him he’ll be staying with Bruno while he goes out on the road, a song young Dwayne knew very well by then.

The final chapter of the episode, featuring Latukefu as Johnson in 1995, focuses more on the final chapter of Dwayne’s football aspirations that would soon open the door to wrestling. First though, he details some of his experiences in the CFL trying to make the roster of the Calgary Stampeders.

Listen, as a Canadian I can say that we’re more than used to a little friendly razzing — and we’re actually better at doing it to ourselves than anyone else anyway. Johnson’s recollections about the CFL and his time in Canada, though, are so far very respectful. Sure, it’s always snowing and for some reason “loonies” and “dollars” don’t mean the same thing, but Johnson doesn’t take any cheap shots at the football.

He points out the differences in rules from what he was used to in America, such as the wider field and greater number of players, but he stresses how he had a hard time adjusting to them rather than resorting to saying the rules were the problem. When Doug Flutie and Jeff Garcia are introduced, they’re given the same list of honors as when future NFL legends were given screen time last season.

Plus, they nailed Doug Flutie’s haircut. 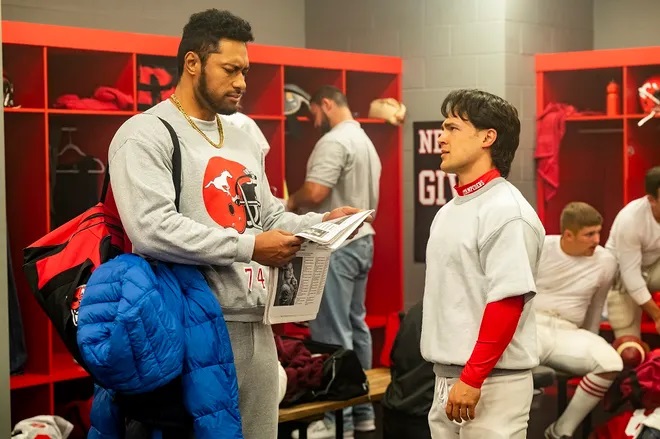 Latukefu as Johnson receives a talking-to from Doug Flutie (Victor Gralak) about his attitude in a still from Young Rock.

In other words: as Dwayne details what would soon become the lowest point of his life, at least as far as football is concerned, there’s no blame or ridicule placed on the CFL but only on himself.

We’re also introduced in this time to Dany Garcia, Dwayne’s girlfriend, future first wife, and continued business partner. Garcia is the embodiment of encouragement to Dwayne as she seeks her own personal success. She’s portrayed by Arlyn Broche, who had previously worked on the Johnson-led TV series Ballers.

Finally, there’s one more new character: someone mysterious played by Sean Astin who is sending a cryptic message out on the internet about some sordid past of Johnson just as his election campaign nears its end.

If the show follows last year’s format, you can expect next week to focus on just one timeline and slow down a little bit. It’s safe to say that if you enjoyed the first season, then you’ll get into this one without skipping a beat. At this point, it also looks like Latukefu is going to be getting in the ring pretty early on in this season, which is good news for The Rock’s wrestling fans.