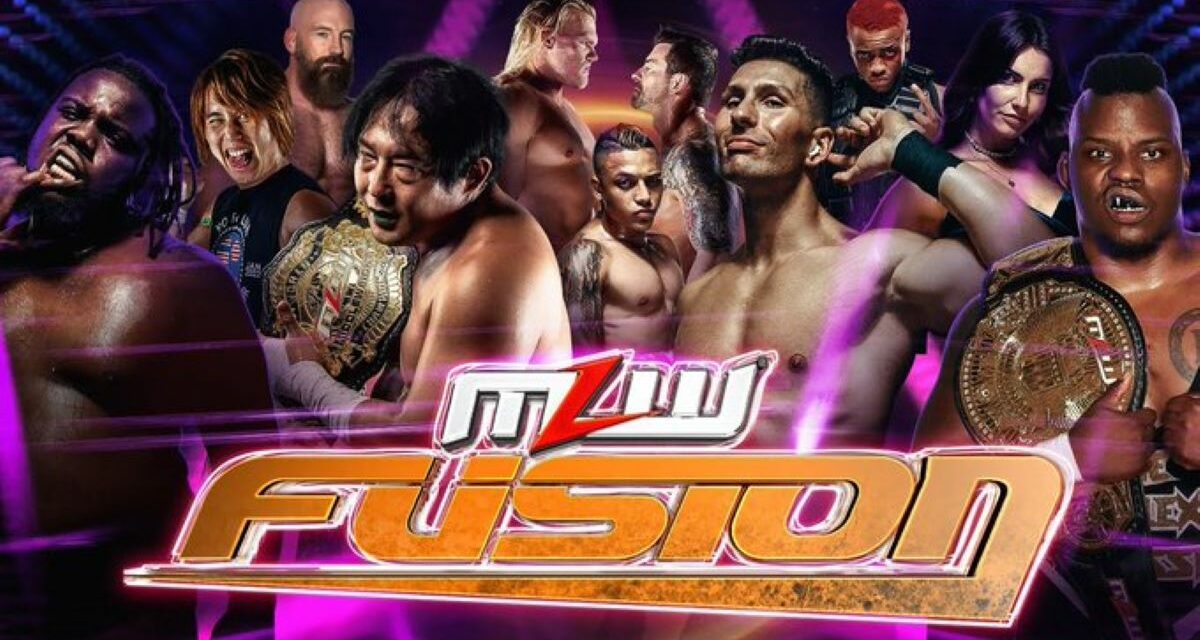 One of the appeals to me in Major League Wrestling is seeing the middleweights fly across the ring with aerial assaults the likes never seen.  Tonight’s main event looks to be a classic, as MLW Middleweight champion TAJIRI returns from Japan to defend his belt against former MLW champion, Myron Reed, Matt Cross, and…a surprise entrant that El Jefe, Cesar Duran is saving for tonight.

We get a recap of the Dynasty dissolution by Richard Holliday and Alicia Atout, as they dropped MLW Heavyweight champion Hammerstone.  Holliday told Cesar Duran he wants what was promised to him; he wants a title shot.  Duran says the Richards/Hammerstone match is already signed…but there is an injury clause if Richards is injured before the match.

Cue the new power couple of professional wrestling, and Holliday figures there is only one way to solve it.  Atout goes all Vanna White, and open a suitcase full of cash.  Holliday posts a bounty for anyone willing to take out The American Wolf before SuperFight.

.@MostMarketable wants his title shot for the World Heavyweight championship at any cost that he and @AliciaAtout have just put out a bounty over the head of @RichardsWesley. #MLWFusion pic.twitter.com/MQHigrqqcP

And we head back to Gilley’s in Dallas, TX. Rich Bocchini and Joe Dombrowski have the call, and we waste no time as the First Match is a title match for the…

As the bell rings, both men come out swinging, and Tankman is happy to release months of aggravation on Kane.  Kane tries a suplex, but cannot lift the almost 300-pound big man.  Kane nails with a stunner, but Tankman is still on his feet and he gives a huge shoulder tackle.  Kane gets the left leg of Tankman and starts to torque it further, even stretching it out on the middle ring ropes.  As Tankman tries to free himself, Mr. Thomas attacks from the outside with a pipe, and hammers away at the bad leg, making Tankman scream in pain.  Kane further causes damage to the leg, and the ref steps in the middle of both men, as he checks on Tankman, and tells the timekeepers table that the match is over.

As the ref helps Tankman to the back, Kane gets on the mic and says “Crybaby Calvin” is a quitter. Well, that dog won’t hunt, as Tankman hobbles back to continue the match.  Kane takes advantage of the situation and now manages to land a German suplex not once, not twice, but three times.

Tankman returns the receipt with a spinning back fist, but is slow to cover and only gets a two count.  The Heavyweight Hustle goes for a powerbomb but can’t lift because of the bad left leg, and Kane uses that knowledge for a roll up and gets the three count.

As Kane and Mr. Thomas are celebrating the win, Bocchini comes out to “Congratulate” the champ on retaining the title, and then asks what he has to say for himself. Kane says he’s going to do what needs to be done and his win is sponsored by “Crybaby Calvin.”  Bomaye, indeed.

It’s time for 5150 cut a promo, and Slice Boogie and Rivera pontificate on family legacies coming in the ring.  Both men state they pulled themselves up by their bootstraps, running down Los Parks and the Von Erichs. Now Ricky Morton and his son Kerry are coming to get in their way?  Nah, son!  They’ll treat them like all the other legacy teams, and they’re just getting started.

Another vignette, another minute we get closer to Doomsday.  Tick Tock, folks.

Meanwhile, in somewhere ethereal, Karli Perez is with King Muertes with an Aztec sundial that she says will make him a god.  Muertes is all for that.

Earlier, Davey Richards was attacked by Homicide, and now the Saito Bros are looking to stomp on the American Wolf, and collect that bounty.

We’ll have to catch up later, because now in the ring it’s…

This is some of the fast paced action that is part of the middleweight action, and coming from the DragonGate promotion, Ho Ho Lun is making a huge impression in his debut match.  As for Navarro, it’s his first match since being concussed by nZo, and he certainly has no ring rust on him, as send Lun to the outside and a tope suicida by Navarro crashes hard.  As Navarro  gets Lun back in the ring, he goes up the top turnbuckle, but Lun takes legs out from under and Navarro lands hard and hits his head on the turnbuckle.  He follows with a basement dropkick to Navarro’s neck to cover for a two count.  The match goes back and forth, with Lun getting Navarro in a Michinoku Driver to cover for another two count.  But the match favors Navarro as he nails a codebreaker, followed by the Jesus Piece swinging neckbreaker and Navarro gets the pin.

Your Winner via Pinfall:  KC Navarro

Bocchini goes to interview Navarro, and asks about his three months on the shelf. Navarro takes the mic, and addresses the fans that nZo months off his career. He wonder why nZo had to take him off TV when he hasn’t on in years (zing!), and further pontificates on why nZo is “the Real One”, when he just “ a real b****!”  Simply put Navarro wants a grudge match.

The SuperFight is next week with Richards and Hammerstone vying for the MLW Heavyweight title, and Navarro and nZo are now slated in the aforementioned grudge match, and we now find out we’ll have an MLW tag match next week with the Von Erichs facing 5150.

Meanwhile (in an empty bar, no less) Gnarls Garvin and Budd Heavy are trying to get on their winning ways.  To sum up, Garvin thinks they need to fight a little drunker, and Heavy drinks to that before passing out.

Two things:  I like a good comedy segment.  This wasn’t it.  Also, if drinking cheap beer is enough to make you pass out, that is not a good look.  To quote Dean Werner from Animal House, “Fat, drunk, and stupid is no way to go through life, son.”

And consider this:  This is coming from a guy that drinks heavily, living in Utah.

Anyway, we get footage backstage of ACH and Kane getting into a pull apart brawl that staff and refs had to break up.  When Emilio Sparks catches up with Kane, he talks about sweeping up Tankman from the ring.  No sooner does he say that than the Heavyweight Hustle appears.  He rushes at Kane, and the camera cuts out.

Meanwhile, Homicide and The Saito Bros have Davey Richards corner, and the elevator opens and King Muertes appears and all four men jump The American Wolf.  But coming around the corner is Your Boy Hammer, and the MLW champions lays out all four men.  As Richards and Hammerstone eye each other, they see Holliday and Atout out of the corner scurrying back down the hallway.

So much for throwing money to resolve a problem.

As we head to the Main Event, Cesar Duran comes out and remarks that like the Dallas Mavericks, this town is full of losers (burn!). But, El Jefe says he’s saved the best for last, and he asks the Renegades if they want to know who it is. Well the matchmaker is happy to introduce the mystery opponent…

What in the name of the Mexi-Squad?!  Either way, business has picked up, to quote the philosopher Jim Ross, and let’s go to the Main Event, which is a…

All four men in the ring are sizing each other up, but once the bell rings, all decorum goes out the window, as Bandido and TAJIRI kick Cross and Reed out of the ring.  Now TAJIRI and Bandido go hold for hold, with neither man gaining an advantage.  Cross and Reed come back in and send Bandido and TAJIRI out, and the Young G.O.A.T. has the upper hand over MDogg. Pretty soon, Bandido comes in with an aerial assault that go to…

Ads (*SIGH* One day.  One gods damned day, can I have a main event that doesn’t cut in the middle of a match?!)

Back to the match, Cross manages a springboard crossbody to cover Reed for a two count.  Now TAJIRI comes in with precision kicks, and he nails a very painful kick to the midsection of Reed as he was leaping from the top rope.  REED is on the ropes…literally, as TAJIRI gets Reed in the Tarantula.  He tries to the Buzzsaw kick, but Reed ducks away.  Bandido gets back in the ring and sends the middleweight champ out.  Now Reed and Bandido stare down, and Reed takes off his chest protector and both men go to a chop off, but Bandido gets the upper hand in this one.  Reed uses all his arsenal to get a stunner and a cutter, but Bandido is too powerful.  Reed gets Bandido in a fireman’s carry, but then Cross gets on the top rope, and uses the opportunity for a double stomp, and he drops feet first to the mat and dives into TAJIRI on the outside. Bandido rolls up Reed, but he gets a two count.  He then nails Reed with a crucifix driver for a pin cover, but Cross gets back in to break the pin count.

Now, Reed gets Bandido on his shoulders in the electric chair position, and Cross is on the top turnbuckle.  He goes for a crossbody, and the end is, what I can only describe as Bandido nails a simultaneous fallaway slam to Cross while getting Reed in a reverse huracanrana.  TAJIRI gets back in attempts to hit the green mist on Reed, but the Young G.O.A.T. shoves Bandido in to the Japanese Buzzsaw and gets the worst of the mist.

With that distraction, Cross sends TAJIRI out, and uses the ring ropes for his signature springboard cutter on both Reed and Bandido.  Cross goes up top and delivers with the Shooting Star Press, but Reed times it just right to nail a cutter, and he rolls him up for the one, two, and three!

The show closes with a video package that hypes the MLW Heavyweight match between Davey Richards and Hammerstone, and you best believe you want to watch this as the show fades to black.

The Four-Way match is one of those matches that you wish more time was given to all the talent in the ring, but I’m happy all the same.  It’s the same feeling I have with the Navarro/Lun match, and I like how they’re handling the feud between Tankman/Kane thus far.

As for the buildup to SuperFight, I can’t wait to see it, and we’ll cover it for you find folks next week.  Until then, see you in seven!