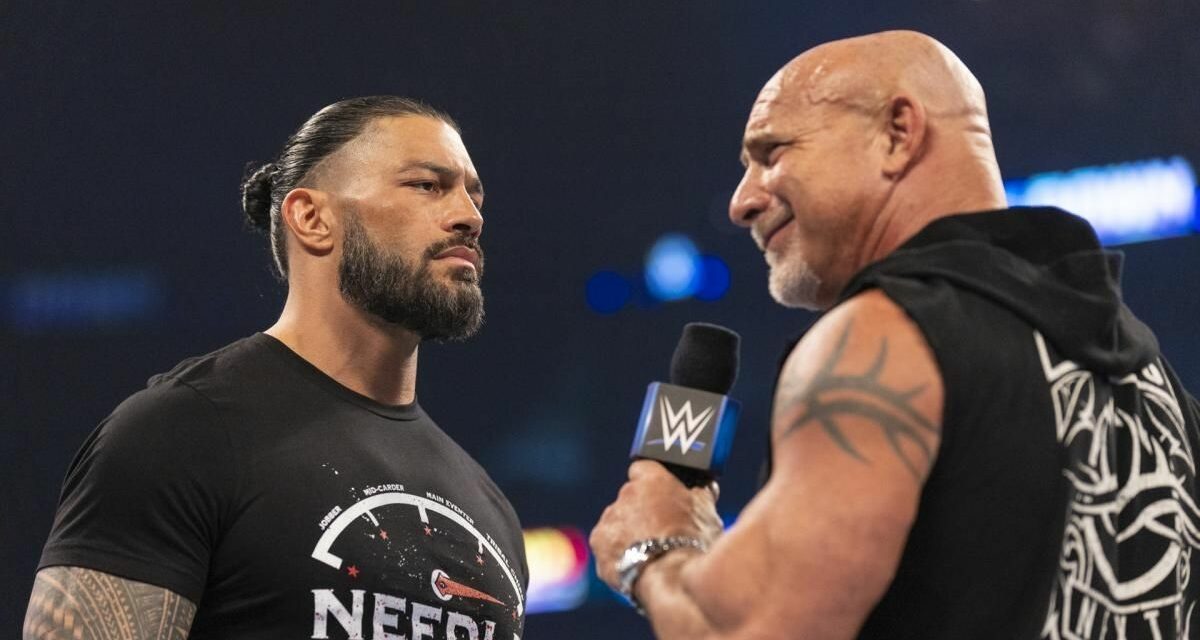 If you watched WWE SmackDown on February 18, 2022 then you know exactly the face-to-face action that happened between Hall of Famer Goldberg and Roman Reigns, the Universal Champion. If not, I’ll tell you. This was a dream match waiting to happen since two years ago. Goldberg has had too many comebacks according to the fans, but his desire is what matters.

The crowd chanted Goldberg’s name at some point during the show, he made it abundantly clear that he will be the next Universal Champion after he beats Reigns’ ass. “Acknowledge me,” Reigns kept saying during the night and quite frankly I wanted him to stop. I can’t put my finger on it, but I think the man went somewhere dark and came back as Seth Rollins. Oof. The audience seemed to agree while they praised Goldberg’s name. Goldberg proved time and time again that age shouldn’t contribute to the knowledge of skills a person has. It was demonstrated in sweat. Lots of it.

And speaking of wrestlers’ bodily fluids, the Undertaker was finally welcomed into the Hall of Fame. They even broadcasted his top moments including his mashups with Kane as the Brothers of Destruction.  “There will never be another like him,” Triple H said.

Drew McIntyre also mentioned how his career could have ended because of an altercation he had with Happy Corbin and Madcap Moss that involved a chair and steel, now he’s out for revenge. At the Elimination Chamber event on February 19, “That will be the night the laughter died,” he raged.

Sheamus at first was talking to the camera calling Ricochet a “pest” while sounding like Rupert Grint. No insults, I like both boys. Ricochet took the slap and came in strong in the ring. Chin locks, jaw kicks and failed backflips from Ricochet and thrown onto the announcement table by Sheamus.

The famous chest slams by Sheamus, nine of them, it was enthralling to watch while his protégé, Ridge Holland, was supposed to be taking notes on how NOT to lose to Mr. Rico over here. Because Holland lost. An Alabama Slam here and Ricochet’s Spanish Fly there awarded him the win. Guess Sheamus couldn’t do what he preached about to Holland’s.

Sami Zayn actually believed he was robbed from his Intercontinental Championship, so he fought Nakamura for it. Yet, let me tell you, he was insane. Also, dare I say, egotistically angry up to a point that it was hard to watch someone so unhinged. I personally wanted Shinsuke Nakamura to keep his title, at least he was humble about it. The spectators hated Zayn, it was weird and funny. His character was deliberately behaving like a celery, I hate celeries.

The beginning of the match had so much hand touching for some reason. Thank you for that, folks. And let’s not forget the grunts and screams coming from both wrestlers. Hilarious when the crowd manages to calm themselves, so you hear it. Kicks in the chest and face by Nakamura. Neck lock from Zayn. While using the edge of the ring, Nakamura shoulder slams into Zayn’s face, he later lands on his knee after a failed attempt at flattening Zayn’s head on the outside of the ring.

Zayn had three unsuccessful submissions, but since he was desperate for that win, he did his Blue Thunder Bomb move and won. Sadly. He even grabbed Nakamura’s injured knee during the match and rammed it against the ringpost multiple times.

I was confused at first as to who was wrestling, Jimmy or Jey, but it was Jey. My bad. I do miss the Usos’ old theme entrances to the ring, they were filled with so much more life then they are now. And their makeup! I loved that. New changes, I suppose weren’t so terrible. Except maybe for Jimmy’s half red hair… too much Seth Rollins again. He had blond once.

Anyway, Ivar slapped Jey with his ass. Jey was able to avoid a crashing situation by moving out of the way and let Ivar plummet to the ground, hard. Kick to Ivar’s jaw was waiting to arrive. Although, Jey did too many of those. It felt lacking.

Of course, regardless of that, the Usos didn’t want to hand over titles just like that. They have been the best tag team for years, losing that wouldn’t only be strange to me, but for them as well. The fight was one of the shortest I’ve seen and I laughed. Like I said, lacking.

The twins didn’t lose their titles, no, friends. Yet in order to remain the winners, Jimmy entered the ring and ran Ivar over with one of their stolen headwear just as the referee was about to count the third pounding to the ground. It’s been left for a later conversation, but we wonder if Viking Raiders’ Ivar could have won if it weren’t for that interruption. Hmm?

Ooh, before I forget. Naomi and Ronda Rousey signed their contracts for the Elimination Chamber match event against Charlotte Flair and Sonya Deville. There is a catch… Rousey has to wrestle with one hand behind her back, since she advertised she can.

Ronda called Sonya a female dog, my girl Naomi kicked Sonya in the head right after Rousey slammed Flair’s face on the table. The furniture was flipped, and they [Naomi and Ronda] walked away like queens. Yes!