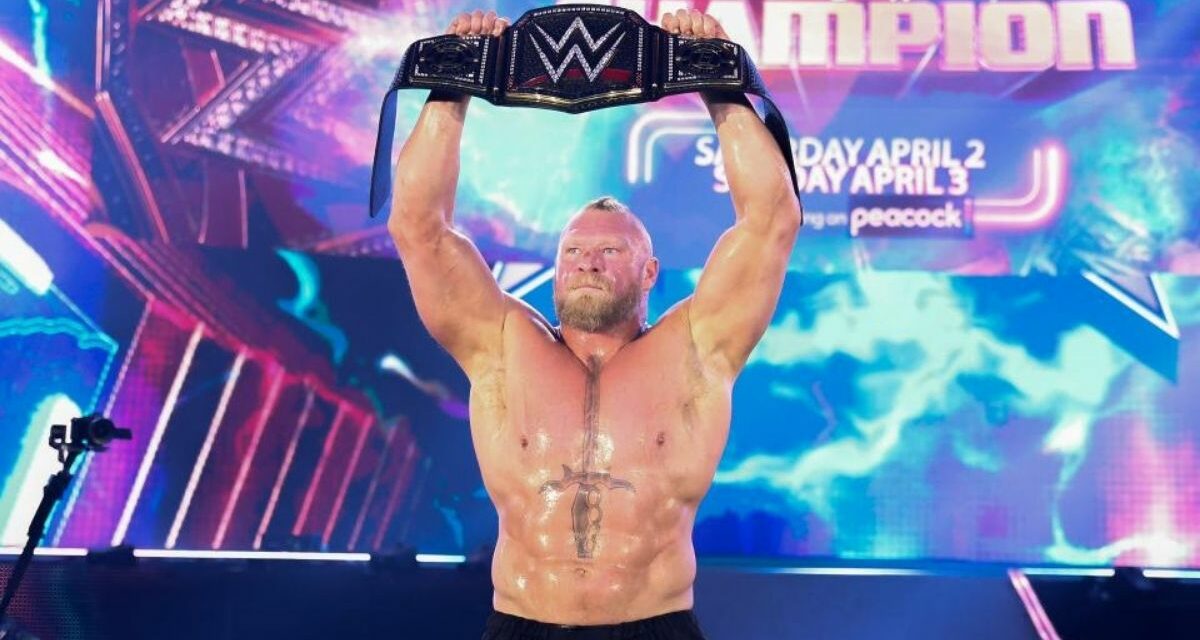 A match nearly two years in the making, as Goldberg looks to dethrone the longest championship run in WWE in 35 years. A long video package precedes the match, and I wonder if the package will be longer than the match.

The two with a big staredown before the match. Goldberg overpowers Reigns in the lock-up, but Reigns with a cheap shot to take over. He quickly throws Goldberg to the outside and bounces his head off the Arabic announce table. Goldberg counters and throws Reigns into the barricade and pounds away before heading back into the ring to beat the count. 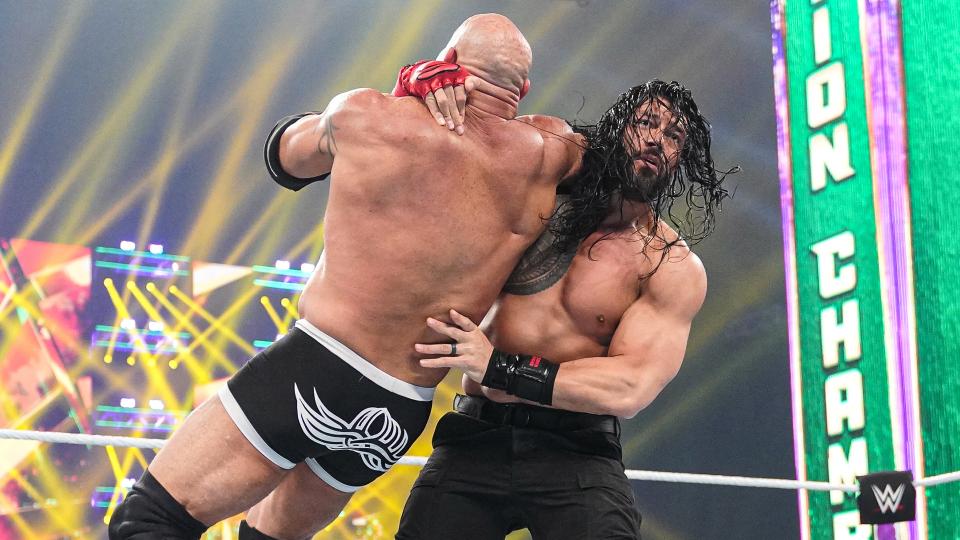 Reigns take advantage of Goldberg slowly getting back into the ring but runs right into a huge spear from the challenger. Goldberg calls for the Jackhammer but Reigns counters into a Rock Bottom for two. Reigns delivers a Superman Punch. He wants another one, but again runs right into another spear. Goldberg can’t get Reigns up for the Jackhammer and Reigns locks in the guillotine choke. Goldberg tries to drive Reigns into the corner multiple times but can’t break the hold. Reigns pulls guard and Goldberg goes out.

We know Belair will be the last entrant, and it’s Morgan and Nikki that will start us off. Nikki takes it to Morgan before Doudrop enters the match. Nikki tries to form an alliance with her but Doudrop just crushes Nikki, including with a big splash against the chain. She turns her attention to Morgan and hits the running senton onto the outside. Nikki sidesteps Doudrop sending her into the ring post. Her celebration is short-lived, however, as Ripley is the next entrant.

Nikki may have wet herself here. Ripley goes after Nikki, but Doudrop steps in. Ripley kicks Doudrop and turns her focus to Nikki, who tries to climb the wall. Ripley goes up with her and smashes her head against the Chamber and sends her falling onto Morgan and Doudrop.

Ripley throws Nikki into the ring, hits Riptide and eliminates the almost superhero.

Nikki A.S.H. has been eliminated

Shortly thereafter, Bliss makes her way in and runs wild for a spell. Morgan hits Doudrop with a sunset bomb off the top rope and pins her!

Doudrop has been eliminated

With that, perfect timing, Belair enters the fray. She picks Morgan off the top rope from the outside and one-arm press slams her back into the ring. Huge spinebuster crushes Bliss, followed by a moonsault, before she goes face-to-face with Ripley. They agree to double standing vertical suplexes on Morgan and Bliss. Ripley slaps the heck out of Belair. Belair delivers a receipt and the brawl is on. Belair grabs Ripley for KOD but she gets out and the two run into double knees from Morgan when Bliss comes running in and drops Morgan and hits her with Twisted Bliss.

Liv Morgan has been eliminated

Ripley goes for Riptide on Bliss, but gets countered. Belair smashes Bliss with a clothesline, which in turn DDTs Ripley. Belair grabs Ripley, hits KOD and eliminates her.

Rhea Ripley has been eliminated

Bliss immediately hits a Code Red on Belair. She tries for a crossbody onto the outside but Belair catches her and slingshots her off the ropes into the Chamber wall multiple times. Belair misses a 450. The two go back-and-forth and Belair clocks Bliss and hits the KOD to win.

Ronda Rousey and Naomi vs. Charlotte Flair and Sonya Deville

Rousey must compete with one arm tied behind her back. Of course, Deville reveals her injury is a ruse. Rousey does some nice things with Deville and asks for Charlotte. Charlotte comes in but immediately tags back out. Rousey wants an armbar on Deville but Charlotte attacks from behind. With Rousey in peril, now Charlotte comes in and goes to work. Flair and Deville isolate Rousey in their corner. Rousey fights back and makes a lunge for the tag, but Flair deftly grabs the rope holding Rousey’s arm behind her back to pull her back. 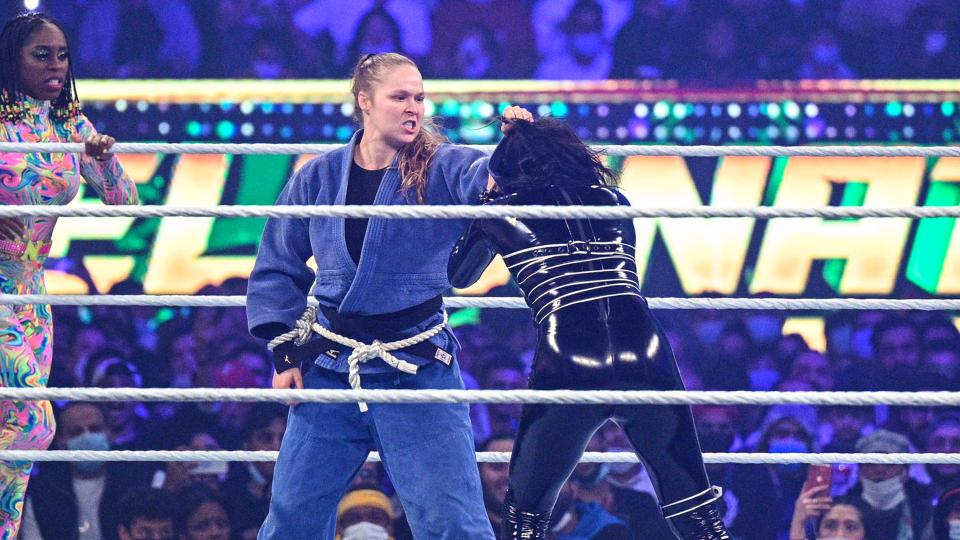 Rousey finally creates some space from Charlotte and brings in Naomi. Naomi runs wild. She is looking good until Flair cuts her off and locks in the Figure Four. Rousey kicks Charlotte in the head as payback but gets tossed out of the ring by Deville. Rousey in now and hits Piper’s Pit on Deville. She grabs Deville’s arm, invites Flair to come in to stop it. Flair declines, Rousey drops into the armbar and Deville taps.

Happy Corbin jumps right in at the bell to assist Moss. Corbin tries to strike again and McIntyre chases him to the back. Moss runs right into a huge boot at the top of the stage and McIntyre rams him into the video board. McIntyre considers tossing him off the stage, but Corbin intervenes. They double team suplex McIntyre on the ramp for two. Moss hits a fallaway slam. They battle back to the ring and McIntyre hits a big throw. And another. McIntyre slings Moss off his back and Moss lands right on top of his head. This was brutal looking. Somehow, Moss didn’t break his neck here.

Moss is up and moving as they go to the outside. The announcers cannot believe he’s moving and frankly neither can I. McIntyre hip tosses Moss onto and over the announce table. McIntyre lines Moss up but Corbin smashes him with a chair and they combine to throw McIntyre through the barricade for a two count.

McIntyre fires up and hits a superplex for two. Moss with a backslide for two. McIntyre comes back with the Future Shock for two. Corbin comes in and McIntyre grabs the sword and swings at Corbin, chasing him off. With sword still in hand, he hits the Claymore and pins Moss with a boot on the chest, sword pointing and Corbin on the ramp.

Commentary notes this is Lita’s first real 1-on-1 match in 16 years.

Lynch showing some doubt in herself as Lita gets the better of it early, so Lynch delivers a big slap to the challenger. Lita with some punches and follows with a rana. She wants the Twist of Fate but Lynch pushes her into the corner. Lynch counters a wild Lita and wrings her head over the top rope to take advantage.

Lynch with a guillotine leg drop with Lita draping over the middle rope for two. Becksploder connects. And again. She goes for another but Lita counters into a DDT.
The two trade punches in the center of the ring and Lita hits a series of clotheslines. Corner splash connects. Crossbody off the middle rope gets Lita a two count. She wants Twist of Fate again but waits too long. Lynch wants Disarm-her but Lita escapes. The two exchange roll-up attempts before Lita locks in a rear-naked choke, but Lynch rolls to the ropes. Lita hits a power bomb for two. She goes to the top for the moonsault but Lynch rolls out of the ring.

Back in the ring, Lita gets a near-fall off a face-first DDT. She goes to the top but gets pulled down. Lynch locks in the Disarm-her. Lita fights, but can’t make the ropes. Lynch pulls her up and hits the Man-Handle Slam and Lita just barely gets her foot on the bottom rope. What veteran savvy.

Lita can’t believe it. She too regroups but it’s too long. Lynch grabs her and hits the Man-Handle Slam and retains the title.

The crowd delivers a huge applause for Lita after the match.

The Usos attack the Raiders out of nowhere as the Raiders march toward the ring. They suplex Ivar onto Erik outside the ring. It appears this match is not going to happen.

It’ll be Theory and Rollins starting things out. Rollins is taking it to Theory and gives Theory the buckle bomb through Lashley’s pod and it takes out Lashley. That did not look great.

Riddle is in and runs wild on Rollins as we see medical personnel coming into the Chamber to look at Lashley. There’s about four people in the mix looking at Lashley.
Riddle tries to go to the top of the pod but Rollins hops up and hits a reverse superplex for two. As this is happening, everyone is helping Lashley out of the Chamber. Rollins hits a big splash on Riddle for two.

Styles is in next and he goes to work on everybody. Theory hops in and power bombs Styles and Rollins in a tower of doom. Riddle then hits Theory with Floating Bro. Riddle grabs Rollins and Styles and hits the draping DDT. Riddle wants to go for an RKO but he realizes the countdown is on and in comes … Bobby Lashley. Except he’s not there. Instead, Lesnar busts out of his pod and destroys everyone. He F5’s Rollins and he’s done.

Seth Rollins has been eliminated

Riddle has been eliminated

We learn Lashley has been put in concussion protocol and will not return.

Lesnar tosses Styles across the ring and delivers the F5.

AJ Styles has been eliminated

We are down to Lesnar and Austin Theory. Lesnar stalks Theory, taking his gloves off. Theory runs around the edge of the ring but Lesnar chases him down. Theory hits Lesnar with a low blow! Theory rolls in with a dropkick and a DDT for a one count. Lesnar, holding himself, is now appearing to be wanting to deal death.

Theory climbs the Chamber and actually gets his upper body out of top of the Chamber. Lesnar hops right up and pulls him back. On top of a pod, Lesnar smashes Theory’s face into the glass. He hoists Theory up and F5’s him off the top of the pod to the outside of the ring.

He hops down, pulls Theory into the ring and pins him.

This show was non-offensive but also non-spectacular. Most of the matches were fun and served their purpose to setup WrestleMania. After a string of absolutely putrid shows in Saudi Arabia, this marks two straight shows there that delivered. This set the stage incredibly well for WrestleMania and there is a clear direction for where things are headed.