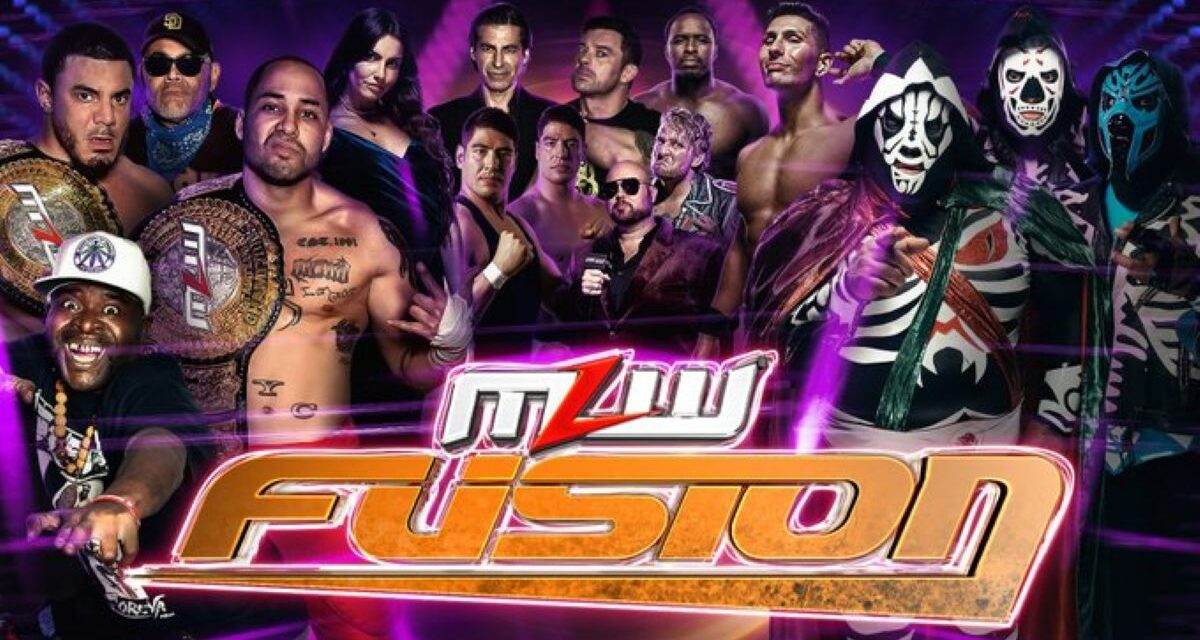 This episode of Major League Wrestling is, in a word, lucha-rific.  Between Davey Richards and ACH in competition, the debut of the Saito Bros., and the tag titles are on the line between 5150 and Los Parks?  Me gusto mucho, as I say in my German accent.

We start with a cold open with Rich Bocchini and John Dombrowski, and they’re with Calvin Tankman. He’s out of jail, and he wants to put his hands on Alex Kane. Well, he gets his wish as the MLW Openweight Champion comes out with Mr. Thomas, then we get a brawl at ringside, as refs and security tries to split up the melee.

We are at Gilley’s in Dallas, TX. and we go back to last week, as they replay the backstabbing by Richard Holliday and Alicia Atout to Hammerstone.  We’ll hear from the “loving couple” later in the show, but now it’s time for the First Match of the night with…

There’s big cheers for the Austin, TX native ACH, but also for Richards.  They both hit the fist bump o’ respect.  There is a good ground game by both men, and Richards displays on catch moves, but ACH is able to counter, hold for hold.  Richards with a knee to the midsection of ACH, followed by a gutwrench suplex.

Richards goes and sets ACH to a trailer hitch/surfboard submission combo into a pinning attempt for a two count.  Fans are into the match, with duelling “Let’s go Ri-chards/A-C-H” chants.  Both men go to forearms shivers, but ACH goes for a basement dropkick to a deadlift German suplex for a pin, but gets a two count.  ACH goes up the top turnbuckle for a double stomp, and he misses the mark.  Richards goes for an ankle lock, but ACH rolls out and gets a Texas cloverleaf. Richards writhes in pain, and just manages to reach the ropes.  Outside the ring, the men battle back and forth, and ACH hits Richards with an enzugiri. He goes down the ramp and launches to an amazing space flying cutter to a frog splash, and just gets a two count.

ACH is on fire and that leads to…

Ads (This drives me nuts how they place the ads right in the *middle* of the action.  What’s wrong with the beginning or the end of the match, especially when it’s a great match like this?!)

We come back, and ACH goes up top once again, but Richards heads him off at the pass, and proceeds to head butts him.  Richards goes for a superplex, and then a pin but gets a two count, but quickly transitions to the ankle lock. The American Wolf delivers a punt into a brainbuster, and goes back to an ankle lock with stomps to the back of his head, and ACH finally taps out.

Bocchini comes out to talk to Richards about the missing Opera Cup, and what goes from here. Richards takes the mic, and gives Bocchini a rest.  He puts over ACH, and shakes his hand in a sign of respect. Richards also lays it out that, “Whoever has my Opera Cup better be wearing a cup, ‘cause I will tear them in two.”  Richards lays it out that his coming to MLW is about the Heavyweight championship, which is held by Hammerstone. Says they’re both cut from the same cloth, and they just want to be the best in the world, and this Hunt is on!

If you’re not excited by this match at SuperFight come February 26th, then I question your priorities.

We get TV feedback with the familiar Contra Unit logo, and it’s Mads Krügger.  He states that Jacob Fatu is a traitor, and yadda, yadda, yadda, wants a match. (Again I ask:  has anyone thought of putting on close captioning with homeboy Krügger?)

Meanwhile, in a dark office, St Laurent is with Cesar Duran, as they talk of the new prospect coming to MLW. El Jefe agrees, and then Myron Reed comes in the shot, and wants the rematch with Tajiri for the MLW Middleweight belt. Duran agrees, and he is in a trios mindset, so it will be a Triple Threat match, featuring Reed versus Tajiri versus…a mystery opponent.  Reed is nonplussed by this news.

Hey, you get what you wish for.

Well, my Doomsday clock says it’s two minutes to midnight, and that means Killer Kross is coming back for SuperFight on February 26th.  Get some pocket change, folks, because in the end, whenever time is told…everyone pays the toll.  Tick tock.

Speaking of anticipated returns Lio Rush is coming back to MLW.  Time for The Man of the Hour to come back to the ring.

Now it’s time for a tag team debut, which is…

The Saito Bros (Jun and Rei Saito) vs. Gnarls Garvin and Budd Heavy

As the Brothers come into the ring, Bocchini notes they were originally born in Japan, but raised in Nebraska.  They’ve been a force to reckon with in All Japan Pro Wrestling, and had also competed in sumo wrestling competition for eight years.

Now this is just a squash match to highlight the Saito Bros, but instead of a squash recipe, it seems only fitting that this match recap deserves a Haiku.

Your Winners via Pinfall:  The Saito Bros.

Afterwards, Garvin attacks the Saitos, and he ain’t happy with the loss.  Bet a six pack he’ll calm down after a drink or six.

Alicia Atout and Richard Holliday share their first Valentine’s Day. Holliday enjoyed that he never saw him coming. He’s going to beat him for the championship, and he’s in his head, rent free. Atout tells Holliday to calm down, and enjoy the champagne, and tells the cameraman to beat it.

(Author’s Rant:  I typically loathe all things Valentine’s related, but this segment was brief so I didn’t have time to hate this enough; just enough time to be mildly irked.

Now, Bocchini calls them repulsive people.  As for me, at least it’s not like Atout is going back to a guy that had sex with a stripper that looked like her.  So…she has some scruples, I suppose.)

We go to a dark hallway, where Cesar Duran is with Davey Richards and Hammerstone to sign the title match contract. Duran tries to goad Hammerstone with the loss of his Dynasty partner.  Your Boy Hammer is ready to swing, but Richards tries to make peace (!), and tells him not to let El Jefe get in his head.  He wants Hammerstone focused.  Duran applauds Richards as a “peacemaker” (whattajoke!) and asks what happened to the Opera Cup.  Did he lose it?  Richards is ready to choke out Duran, but Hammerstone stops him, and says he wants Richards at his best, too.  Once the paper is signed, they shake hands and say see ya in Charlotte.

If you heard a weird sound just now, that was me fanboy squeee-ing about this match prospect.

The other sound you heard is me double squee-ing, as it’s time for the Main Event, and it’s a…

There’s no sign of L.A. Park with his sons, but I definitely dig Hijo’s Skeletor-style outfit.  Rivera and Boogie come out with couple of honeys and the IWA tag belts, too (so they’ve been busy in Puerto Rico, apparently).  Dombrowski notes that 5150 dedicate this match to Konnan who’s resting from surgery.

The match starts and it’s a brawl from the word, “go!”  5150 Take out Junior, and us the Street Sweeper double team move on Hijo.  Rivera brawls outside with Hijo, while Boogie takes on Junior inside.  Junior Manages to sends Boogie outside and he gets a Moonsault to all men on the outside.  Junior grabs the ladder and sets it up from the ring apron to the guardrail to set up Boogie for a big move.  Smokes tries to distract him but gets spooked off, but that is enough time for Boogie to stop Junior, but Hijo nails a tope suicida on Boogie, and he lands hard on the ladder.

Rivera comes back, walks across the ladder, leaps to a beam and a delivers a crossbody on Los Parks.

Rivera is hyped as he goes to…

Ads (Are you tired of my rants on ads in the middle of a match?  Then I’ll stop…once that nonsense stops!)

Back to the action, we go inside the ring, and Hijo tries to slam Boogie on a ladder propped in the corner, but he puts on the brakes and power slams Hijo on ladder.  Boogie then gets the ladder to climb, and Junior comes from behind and hits his back with the leather belt from his costume, and you can hear the crack of the belt.  As Boogie crashes down, Junior climbs the ladder, but Rivera stops his ascent, but Los Parks go to work on Rivera with a huge Canadian destroyer, and then Junior dives onto 5150 in to the guardrails, and follows with an Asai Moonsault.  The fans are chanting, “Lu-cha!  Lu-cha!” like we’re in Boyle Heights.

All of a sudden, Homicide comes out to lay the smackdown on Hijo, that brings out the original Chairman himself, L.A. Park, and he comes to even the odds for his sons.  Homicide is getting the business from Papa Park, and Park goes for spear.  But Homicide ducks out of the way, and Park hits his son El Hijo, instead.  Boogie takes a chair to L.A. Park, but Junior rams that same chair to his midsection.  Junior climbs the ladder, but Rivera quickly climbs the other side of the ladder and they both battle on top.  Boogie pulls down Junior and gets him in a fireman’s carry, and that makes it easy for The Radioactive Papi to get in position for 5150 to deliver the 456 finisher.

With Los Parks in no position to defend, 5150 climb up and get the tag belts to end the wild match!

As we leave 5150 celebrating their win, we get plugs for the upcoming grudge match with Mads Krügger and Jacob Fatu coming up, as the show fades to black.

With the First Match and the Main Event, it was “straight fire”, as the kids say.  ACH and Richards had a fantastic match that I wish could’ve gone longer.  That was my same reaction to the ladder match with 5150 and Los Parks (and considering the Von Erichs had to back out due to COVID, this turned out better than expected).

I wasn’t as crazy about the Saito Bros, as they looked a bit stiff; but the match was short enough and I managed a haiku (also; you’re welcome!)

I’m curious for the next show, so see you in seven!